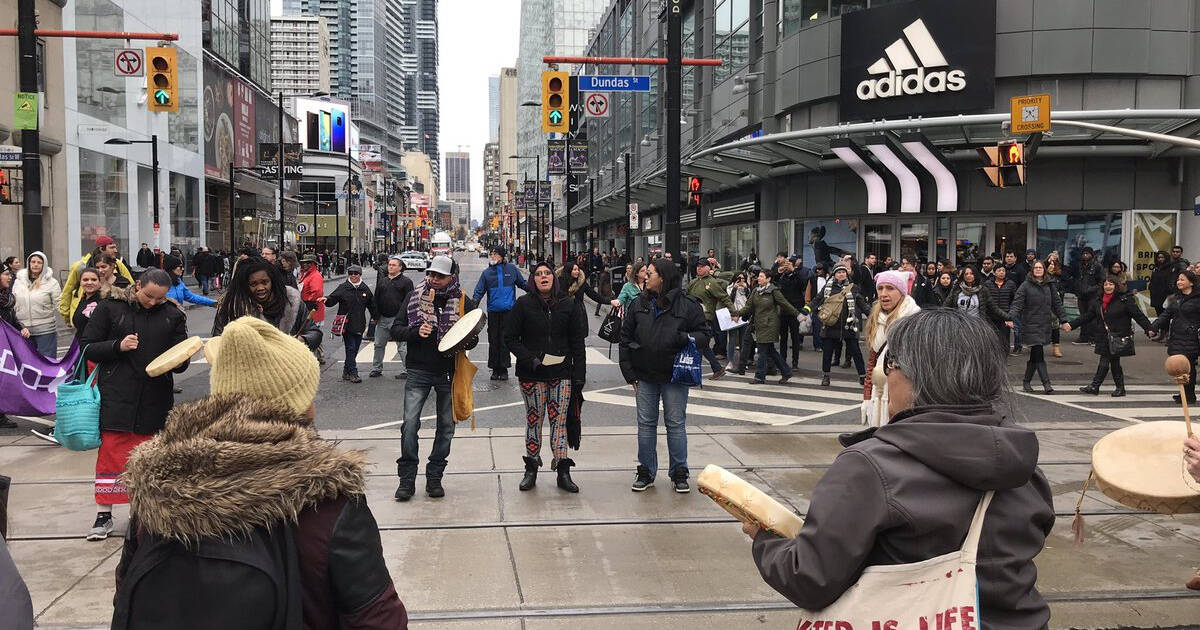 Hundreds of Indigenous Rights activists are gathered in Yonge Dundas Square this afternoon among throngs of last-minute holiday shoppers to protest the first draft of Canada's long-promised Indigeous Rights Framework.

Idle No More Toronto is leading up the protest, which has taken the form of a traditional round dance, in an effort to "remind the Canadian government that Indigenous Rights are recognized and affirmed" as per section 35 of the Constitution.

Gathered together at Yonge & Dundas Square in Toronto to remind the Canadian government that #IndigenousRights are recognized and affirmed. #IdleNoMore #RoundDance #UNDRIP pic.twitter.com/8QmPy7M3B8

Indigenous communities have been waiting on the federal government's "Recognition and Implementation of Indigenous Rights Framework," since Prime Minister Justin Trudeau promised it would be coming back in February.

Round dance in support of native resistance across #Canada #toronto #idlenomore pic.twitter.com/0XtzE5xZk4

This framework would "enshrine" section 35, as CBC Indigenous puts it, creating a code that would restrict Canada from infringing on Indigenous rights.

First Nations leaders aren't pleased, however, with what they've seen of the proposed framework so far, nor with the government's lack of consultation in composing it.

Others present at the protest today are demanding additional measures from both the federal and provincial governments, such as a sufficient plan for combatting climate change.

"Honour the Treaties and our Nation to Nation agreements, no top down approach from the government, and no partnership with Canadian government," reads an invitation to today's protest on Facebook.

"We must be consulted. We will exercise self-detemination and self government," it continues. "Pass Bill C-262 The United Nations Declaration on the Rights of Indigenous People. Indigenous Sovereignty!"

This is the second year in a row that activists have blocked off Yonge Dundas Square on November 21, which falls exactly six months before and after National Indigenous Peoples Day on June 21.

Last year, roughly 150 people showed up to participate in the round dance, which marked the five-year anniversary of the Idle No More movement in Toronto.

by Lauren O'Neil via blogTO
Posted by Arun Augustin at 12:25 PM