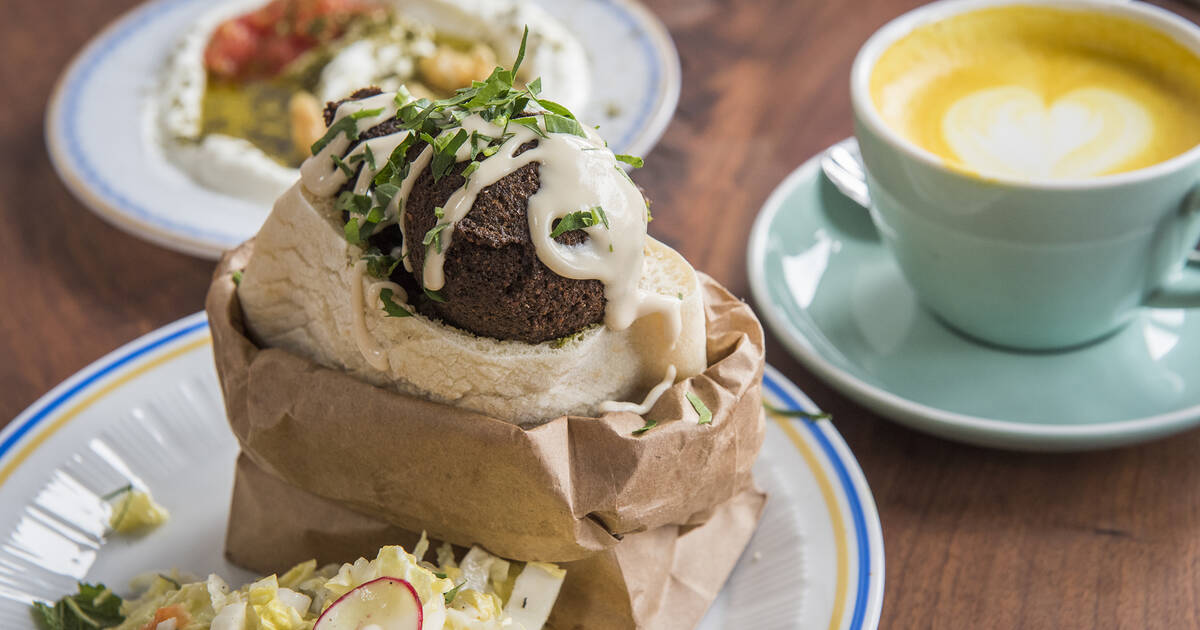 Restaurants open on Christmas Day in Toronto go beyond your favourite 24-hour diners and Chinese restaurants. Whether you're craving a festive dinner or something more casual, these restaurants will hit the spot on the most joyous day of the year.

Here's a roundup of restaurants open on Christmas Day in Toronto.

The 24-hour restaurant by Yonge & Bloor will be open to dish out turkey dinners along with their regular menu of great late night fare.

This Indian restaurant in the Entertainment District will be open for both lunch and dinner service.

The all-vegetarian buffet located in Richmond Hill will be open for the duration of the holidays. Hours are 11:30 a.m. to 10 p.m.

The restaurant at the Shangri-La Hotel will be offering a four-course Christmas lunch and dinner for $130 per person.

Head to Riverside between 10 a.m. to 6 p.m. to load up on a three-course festive lunch special for $40. The meal will include a succulent oven roasted turkey with buttermilk mash.

The restaurant in the Four Seasons will be serving a three-course prix fixe menu from 12 p.m. to 10 p.m. Lunch will set you back $75 while dinner will cost $105.

The popular Israeli brunch spot at University & Adelaide will be open for regular hours. They'll be serving up their menu of shakshouka, farmers breakfasts, and tasty desserts. Their Richmond Hill location is open too.

Chicken in the Kitchen

If you're craving shawarma pizza you're in luck. The restaurant at Dufferin & Wilson will be slinging pies from 11 a.m. to 2 a.m.

The Adelaide location will be open on Christmas Day. Continue the feast from the night before with copious amounts of grilled steak. 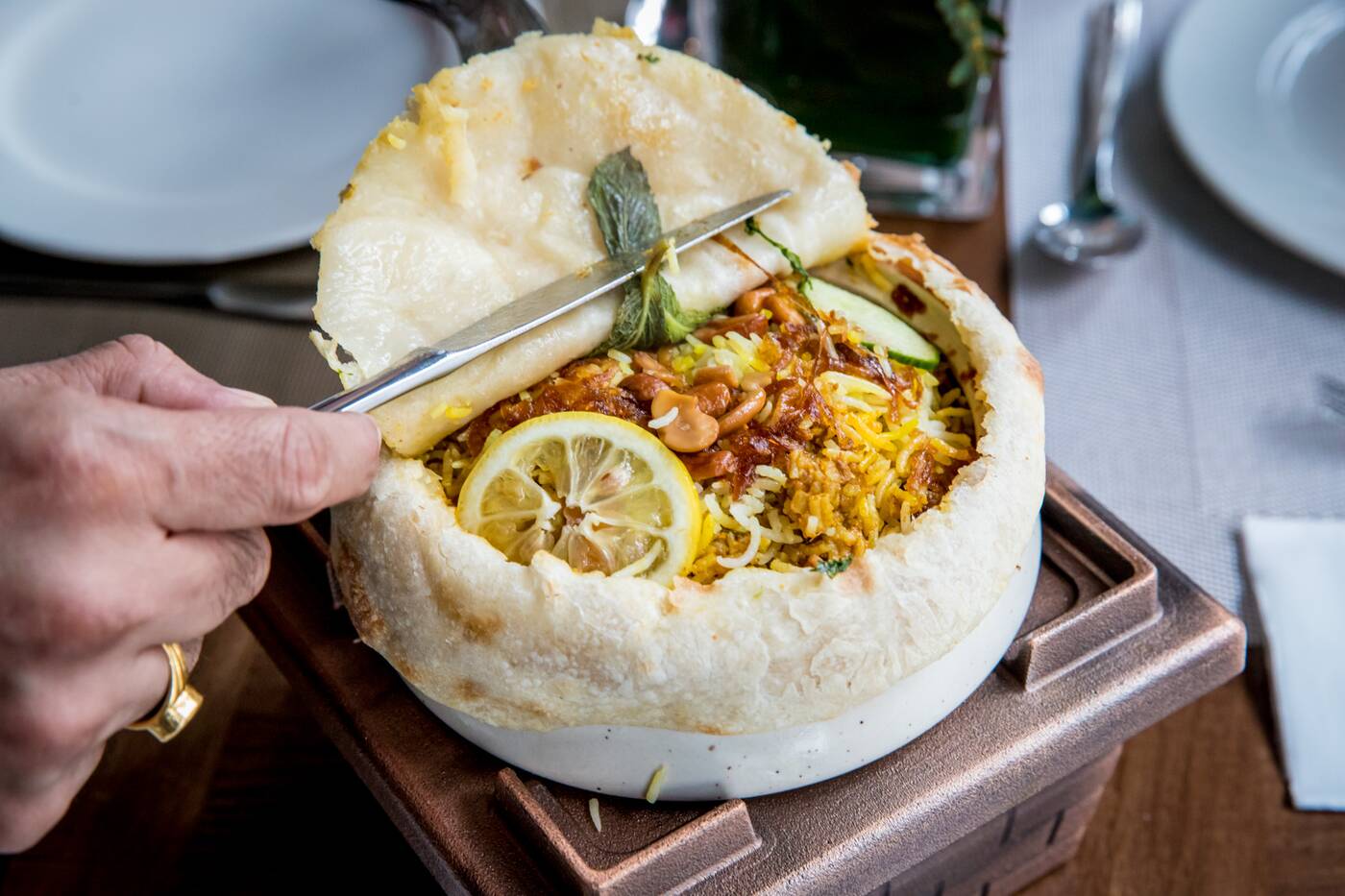 If you're craving Indian come December 25 Khau Gully is the spot to visit. Photo by Jesse Milns.

Get your fill of dim sum in Chinatown starting as early as 8 a.m. Fill up on deep fried shrimp rolls, sui mai and much more.

All three locations of the diner will be open. Load up on all your favourite diner staples while slurping on some milkshakes.

This Yorkville institution is open year round serving up their menu of burgers, nachos and cocktails. They also will have turkey dinners available for the special day for $18.

Let this diner on the Danforth take care of breakfast. They'll be open from 7 a.m. to 1 p.m.

The fish and chips joint on West Queen West will remain open throughout the holidays.

This Annex staple is open from 10 a.m. until 2 a.m. on Christmas Day should you need a break from spending time with your family.

From noon to 11 p.m. you'll be able to get your fill of Pakistani and Indian cuisine at this restaurant on Finch West.

Chow down on massive plates of Turkish kebabs, doner, and pide between 11:30 a.m. to 10 p.m. at this restaurant in Etobicoke.

Between 11:30 a.m. to 10 p.m. you'll be able to get your fill of traditional Indian dishes at this spot at Yonge & Davisville.

On Christmas Day the ramen chain's Church and Highway 7 locations will be open. Warm up to huge bowls of ramen filled to the nines with noodles and pork. 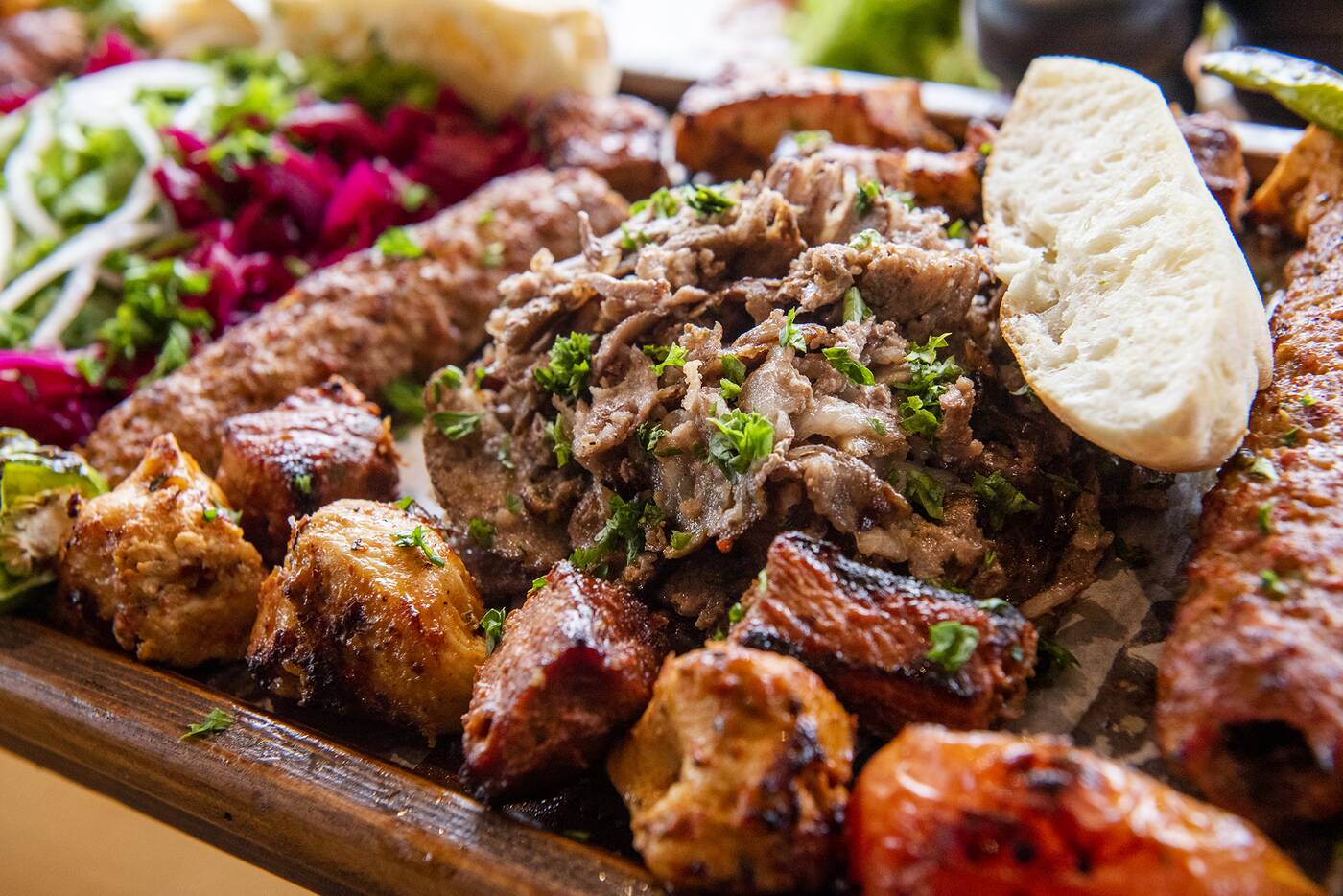 Make Christmas Day that much better with Turkish eats at Meat Point. Photo by Hector Vasquez.

Both their York Mills and Yonge & St. Clair locations will be open regular hours. Stuff your face with BBQ pork buns, rice dishes, and noodles.

The Metropolitan Hotel's Chinese restaurant will be open for regular hours.

The 24-hour diner on Dundas West won't be closing its doors for the holidays. Feel free to visit at any time of the day.

The swanky restaurant inside the St. Regis will be open and serving up a holiday lunch and dinner prix fixe menu.

The Middle Eastern joint on Queen West will be open for business and dishing out laffa. Their other outposts are open too but hours may vary.

Copious amounts of meat are to be had at this Turkish restaurant on Wilson in North York. Fill up between 11 a.m. to 10 p.m.

This restaurant will be just one of many open in Chinatown on Christmas Day. They'll be open regular hours.

Each location of the restaurant is operating around the clock, making it a reliable choice for Korean eats on the holiday Tuesday.

The Middle Eastern restaurant on Geary will be keeping its doors open on December 25 for a Christmas brunch between 10 a.m. to 4 p.m. 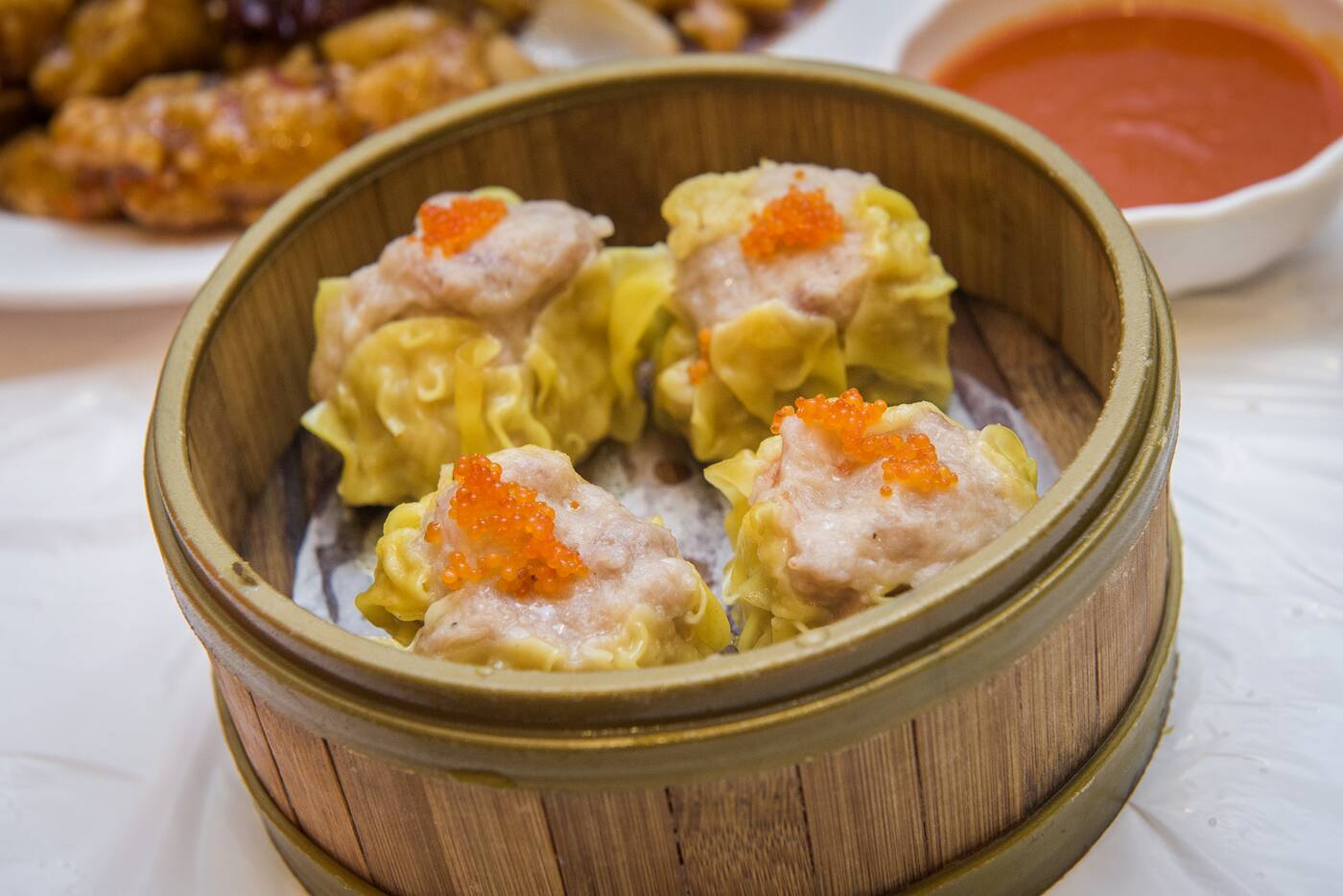 It's all day dim sum affair at Rol Son in Chinatown. Photo by Hector Vasuqez.

As always, this Vietnamese noodle house on Dundas West will be open 24-hours.

Get a taste for authentic Greek pastries when you visit this spot on Pape Ave. They'll be open from 9 a.m. to 6 p.m.

Steamed buns, dumplings, spring rolls and more are all on the menu Christmas Day at this dim sum restaurant in Chinatown.

Wonton soup, chicken balls and cantonese chow mein are just some the offerings you can stuff your face with at this North York Chinese restaurant.

Toronto's first 100% vegan Ethiopian restaurant will be keeping the doors open for dinner start at 5 p.m. on December 25.

Pad Thai, pad kraprow and pla pae sa are just some of the Thai dishes available for lunch and dinner at this restaurant on Church.

The Turkish bakery and cafe on King West will be staying open come the holidays. Visit on December 25 between 8:30 a.m. to 4 p.m.

If your Christmas Eve dinner didn't have enough meat make your way to this Yorkville steakhouse. They're open from 3 p.m. to 10 p.m. 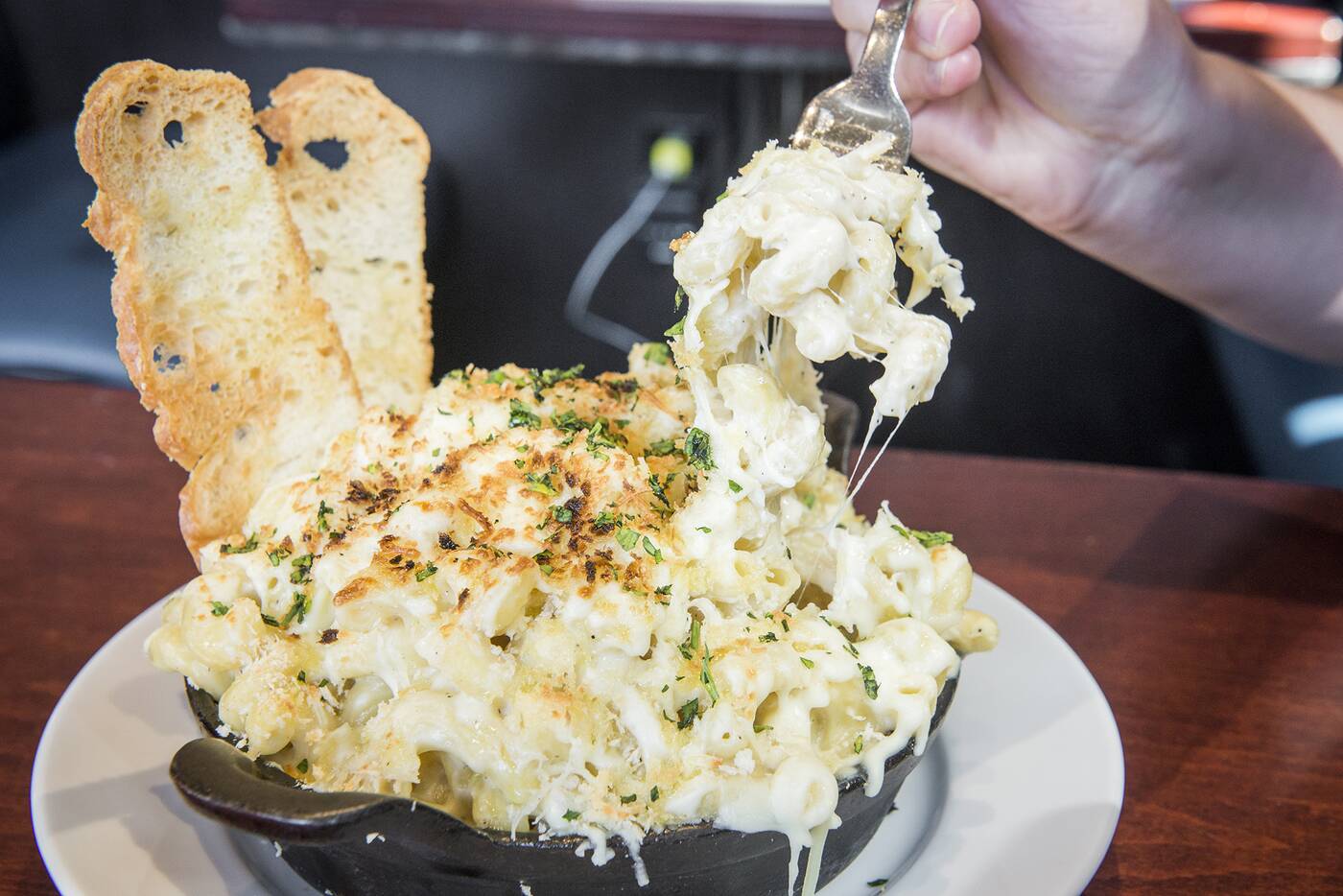 Get your fill of truffle mac on Christmas Day at Thompson Diner. Photo by Hector Vasquez.

The popular Chinatown restaurant will be open from 11 a.m. to 2 a.m. to help you indulge all day and late at night.

The Chinese restaurant tucked in a plaza at Bathurst and Steeles will be open for regular hours.

The West Queen West hotel and restaurant will be open Christmas Eve and Christmas Day. They open at 9 a.m. and will serving meals well into the night.

Regularly open the majority of the day and night, the diner at the Thompson Hotel will switching things up and will open b be open until 9 p.m.

If you're trying to hunt down a tasty burger come December 25 head on over the Kensington Market. The halal spot will be open from 11 a.m. to 10 p.m.

From noon until 10 p.m. this restaurant found in Little India will be churning out giant dosa filled with a spiced potato stuffing, chana bhatura, and much more.

The regular menu of eggs, omelettes, sandwiches and fish dinners will be available at this Jewish restaurant in North York between 9 a.m. and 8 p.m.

Get your fill of cheap eats and drinks at this bar on Yonge Street. Their other locations Queen Street Warehouse, El Furniture Warehouse and The Dime will also be open regular hours.

by Jaclyn Skrobacky via blogTO
Posted by Arun Augustin at 12:30 AM