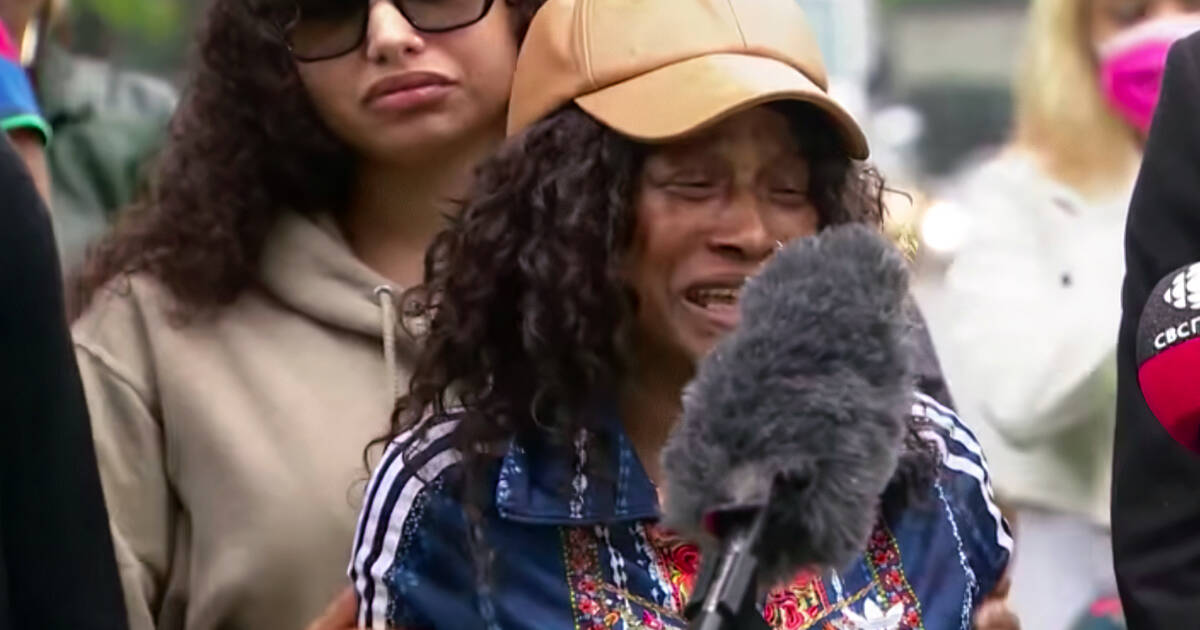 Family members of Regis Korchinski-Paquet, who died Wednesday evening by falling from the 24th-floor balcony of a Toronto apartment building while police were inside her unit, have issued a formal statement regarding the circumstances of what they say could have been an avoidable tragedy.

Human rights criminal defence lawyer Knia Singh read a prepared statement on behalf of Korchinski-Paquet's parents, brother and sisters during a press conference Thursday evening outside 100 High Park Avenue, where just one day previous the 29-year-old woman's lifeless body had remained on the ground for more than an hour covered by an orange tarp.

"On Wednesday, May 27, 2020, at approximately 5 p.m., a 911 call was made by a concerned mother for the safety and well-being of her child, Regis Korchinksi-Paquet," said Singh to members of the community and media.

"Regis was in distress over a family conflict and her mother sought police assistance to bring calm to the situation. Once police arrived at the residence, they met Claudette, her mother, Regis and [her brother] Reece, in the hallway of 100 High Park in Toronto."

Scenes from the press conference with @masterknia and Korchinski Family standing together in solidarity releasing a statement ✊🏾 pic.twitter.com/2ybV3WAq2i

Singh went on to say that Claudette "pleaded with police to provide assistance to her daughter" by taking her to CAMH for mental health support.

"Words were exchanged between Regis and the police officers, and Regis stated she had to use the bathroom and went into her apartment. Her brother, who was also present, witnessed multiple police officers enter the unit after Regis went in."

Reece Korchinski-Beals later described the actions of police as "aggressive," calling into question why so many officers (at least five) had gone in after "a girl that is 100 lbs."

The brother said that when he tried to go into the apartment and get Regis, he was stopped by police.

"After approximately one to two minutes, the mother and the brother heard commotion in the apartment," said Singh while reading the family's statement.

Regis Korchinski-Paquet’s sister Renee consoles their mother Claudette as the family held a press conference at 100 High Park Avenue close to where she fell from the 24th floor during a police assistance call. The SIU is investigating. Follow @wendygillis for the story. pic.twitter.com/qmwJbxgKDD

"Eventually an officer came out of the unit, knocked on the neighbour's door and stated to the family that [Regis] is over at the neighbour's house or in the unit below," continued Singh. "After a few moments, the mother then asked the officers if her daughter is on the ground."

"An officer went into the unit and came back out and told her mother yes, she is on the ground."

Singh says the young woman's family is distraught over the senseless loss of life and that they are seeking justice for Regis in the form of a full and transparent investigation.

"The family wants answers to what happened. How can a call for assistance turn into a loss of life?" said Singh.

"The family is extremely concerned that in recent times, people with mental health distress issues across North America are ending up dead after interactions with police."

Singh also said that the family wishes to ensure camera footage from the apartment hallway is secured by the Special Investigations Unit, a civilian police watchdog agency that is currently probing the circumstances surrounding Korchinski-Paquette's death.

When Black people call for assistance, policing have training for mental health and still Regis Korchinski-Paquet ends up dead. Thank You for this press conference. Thank you for Justice and Action. #mentalhealth #care #compassion pic.twitter.com/iFFoNBQXsR

Singh did not repeat allegations made yesterday by Korchinksi-Paquette's mother, brother and cousin that she had been "pushed" or "thrown" from the balcony by Toronto Police.

He did make it clear, however, that the family does not believe the young woman would have jumped on her own. Singh said that she had, in fact, been trying to get mesh safety netting installed around the balcony for weeks.

"If we see statistically, there is a higher proportion of violence against people of colour," he said of the situation. "When you intersect mental health and colour, then you get an even higher percentage."

Korchinski-Paquet is being remembered as a "talented gymnast" who was "proud of her Ukrainian and Nova Scotian heritage."

Singh said that she had "used her skills to teach children and give back." She also volunteered at her church and was said to be "a well-known pillar of her congregation."

The 29-year-old is survived by her mother, father, three sisters, one brother and 12 nieces and nephews.