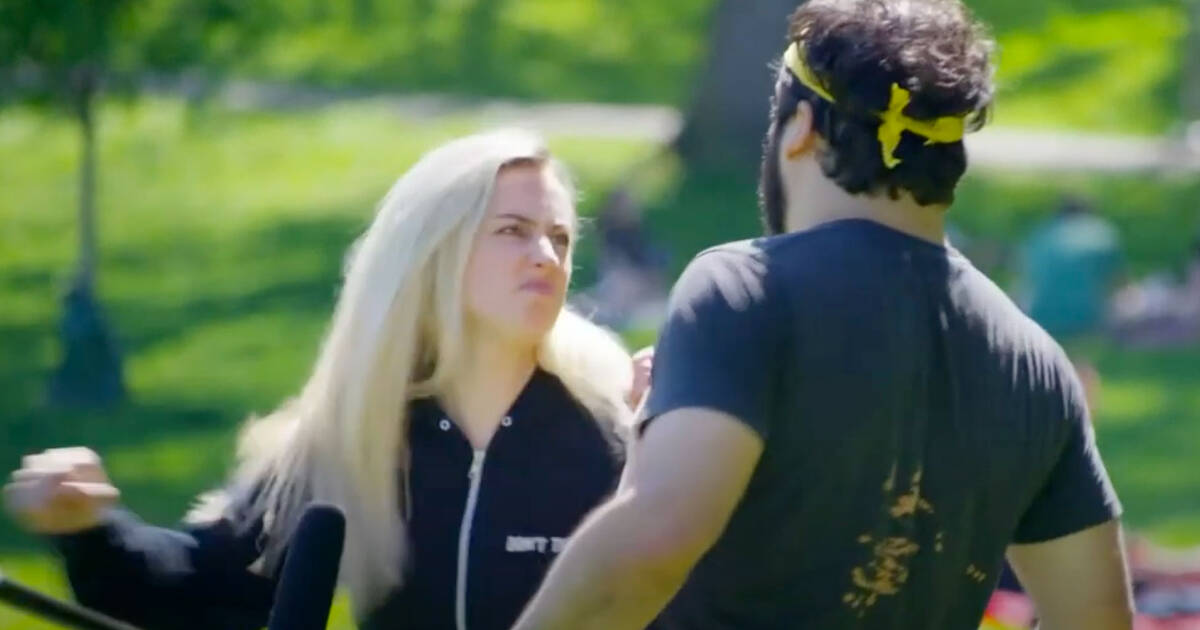 A new version of the Trinity Bellwoods kiss video that went viral last week has been circulating online for the past 24 hours, and it's giving Toronto residents the alternate ending they've been craving.

The parody depicts the same interview that went down between a CTV reporter and a young woman named Gillian McKeown days ago, with the real voice-over playing in the background and the woman (played by Toronto actor Gwynne Phillips) reciting the same comment about masks being "not 100 per cent important."

But it's not until a young Irish man named Jack Ring (played by Toronto actor Rodrigo Fernandez-Stoll) enters the frame that the video takes a different turn.

When Franandez-Stoll comes on screen and tries to plant one on Phillips the way the real Bellwoods smoocher did, instead of kissing him back and promptly swooning over the unconsensual act, she proceeds to beat the sh*t out of him.

And Phillips doesn't just hit him once and move on — she instead takes to his ribs with a baseball bat several times in order to show him just how unwanted his affections truly are.

The parody video also includes a post-kiss interview with Fernandez-Stoll in which he admits to having a cough all week and says he didn't really think of the risks associated with kissing a stranger during a pandemic until that very moment.

Unsurprisingly, Twitter users have been widely sharing and replying to the video, with many of them thanking the creators for "the version that needed to happen."

"This is pure MAGIC, love it!!! This is absolutely how it should have gone down. (Now can you do a couple of thousand people being ticketed in Trinity Bellwoods Park?)" wrote one Twitter user.

Others have called the video "cathartic," "satisfying," "brilliant" and "perfect."

So while the real McKeown and Ring have both publicly said they don't believe the incident was sexual assault since they had spent time together earlier that day and she had openly expressed interest in him, other Torontians seem grateful at the chance to witness a more appropriate, gratifying ending to this ridiculous story.