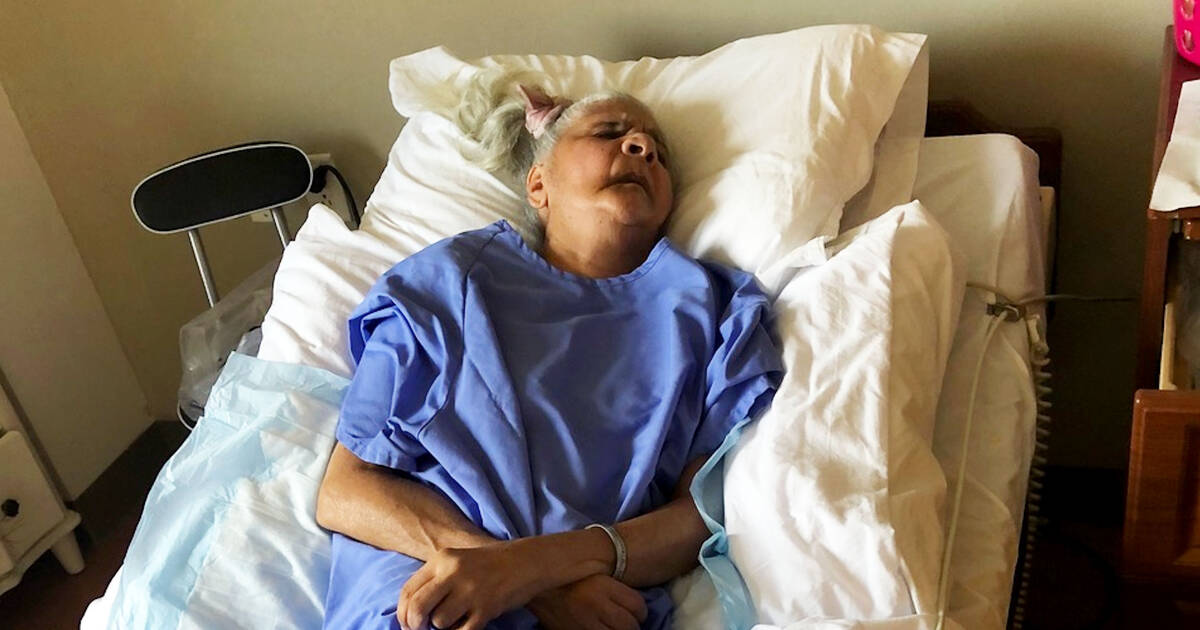 Many Canadians are just becoming aware of the appalling conditions in long-term care homes after a military report was released on Tuesday, but for Sharon Chandar it's been her everyday nightmare for the last two years.

"Bed sores, pneumonia, left in diapers for hours daily, undressed wounds, left in bed clothes covered in urine, physically abused, left on the floor with a broken hip ...," Chandar listed all the horrible things she witnessed. "It didn't get worse over COVID. Now COVID is showing what has happened before."

In 2018 Chandar moved her 74-year-old mother, Gloria, into Villa Colombo Vaughan Di Poce Centre after taking care of her full-time for two years.

"I felt fortunate and lucky that my mother was in the home. I felt proud that she was in this home," she told blogTO in a telephone interview.

The home appeared to be clean, well kept, had nice facilities and Chandar was promised full-time staff to look after her mother who has Alzheimer's, diabetes and strict dietary needs.

But soon Chandar noticed that things weren't what they appeared.

Sometimes it was little things like despite Chandar's clear instructions not to give her mother beef or pork because she's Hindu, they still fed it to her.

There were also more concerning issues, such as Chandar frequently finding her mother soaking wet, having been left in soiled diapers for hours on end. Or the staff not properly cleaning her mother, instead slathering her genitals in barrier cream that gave her sores and several infections.

She attributed it in part to the floor being frequently understaffed.

"The [nurses and personal service workers (PSW)] are at a 200 per cent capacity. They're overworked and underpaid. At times there was only one PSW for 30 residents," she said.

Villa Colombo Vaughan have not responded to requests for comment. 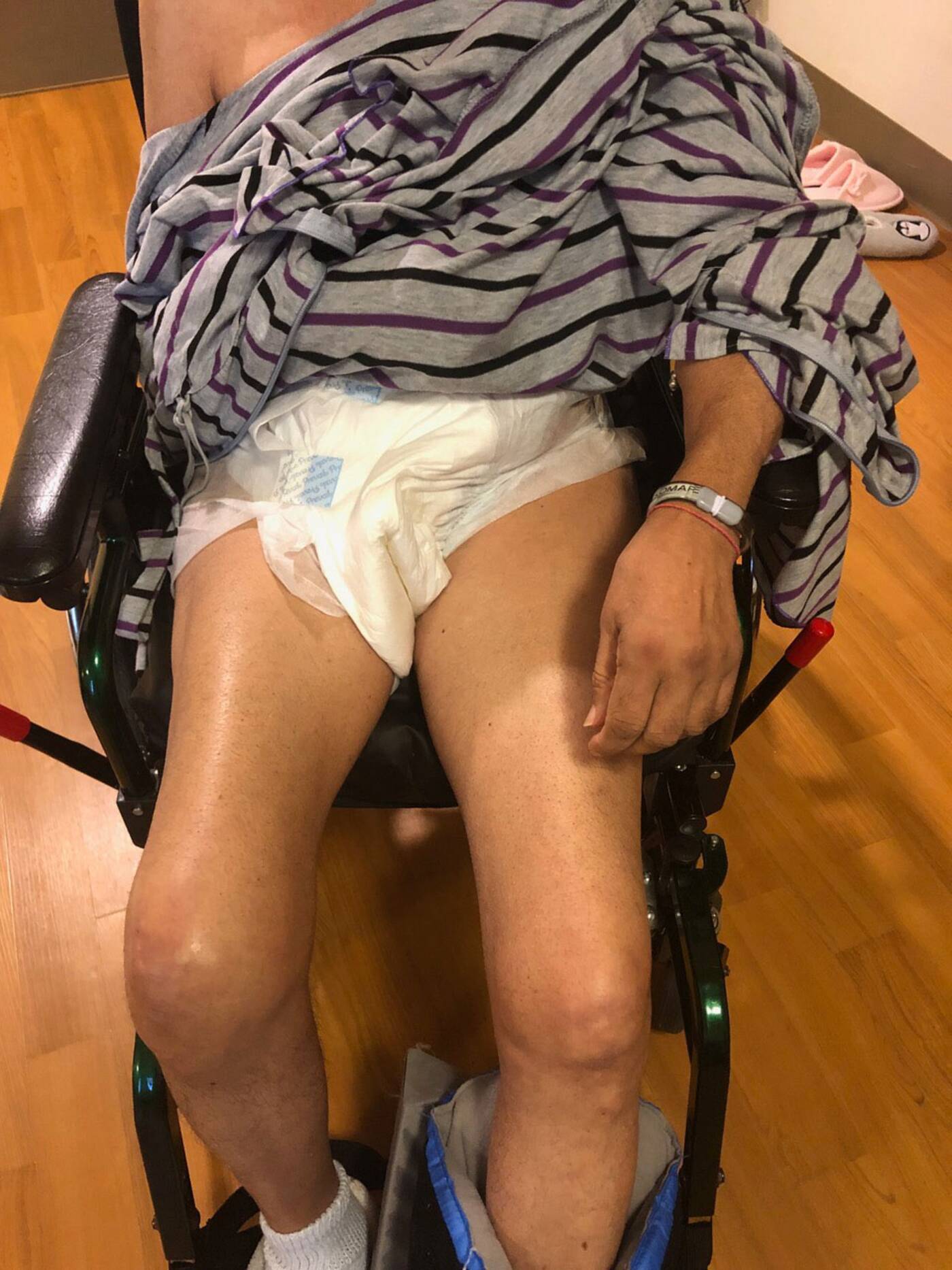 Sharon Chandar shared this photo of her mother's diapers while in care at the long-term care home.

Chandar also noted that staff who are brought in from temporary agencies were never brought up to speed on the care plans of the residents.

"One agency PSW told me: 'We go in blindly'. They're just told which rooms [they're] looking after," she explained.

And the lack of staff meant that sometimes when Chandar asked for help with her mother she was blatantly ignored.

"The nurse ignored me and wouldn't come look at her mother despite me telling her that something was wrong," Chandar said, speaking of an incident where her mother had a vaginal infection that needed medical attention.

Another time when a Villa Colombo resident was being aggressive and racist toward Chandar, she went to ask a nurse to get the situation under control.

"The nurse laughed and ignored it," Chandar said in disbelief.

The situation with the resident escalated and Chandar ended up snapping and yelled at them; a misstep that got her banned from Villa Colombo Vaughan for a month as it was deemed abuse.

"They threatened that if I ever come on the property they will call the police and charge me with abuse," she said.

This particular incident was investigated by the ministry and, according to Chandar, to get both sides of the story they would only speak to the resident in question and Chandar's mother, who can't speak due to the Alzheimer's.

"That's discrimination!" said Chandar, who is her mother's power of attorney and her only advocate.

"They ignored my voice and told me to move my mom or I will be banned. My mom shouldn't be the one who is being effected by all of this."

Shortly after Chandar was able to move her mom to a different floor in the home. Her mother's care improved but then the pandemic hit and things quickly spiraled.

The home closed mid-March and residents were eventually confined to their rooms after five cases of COVID-19 were confirmed on the floor. But family was allowed to see their loved one's via FaceTime.

"The first time she was smiling and laughing. The second time she wouldn't wake up. She refused to open her eyes. The third time she looked ghastly pale. I didn't understand what was happening," recalled Chandar.

But the staff told her everything was "fine".

"She's 'fine'? Was I seeing something no one else is seeing? I questioned my sanity over and over," Chandar said. 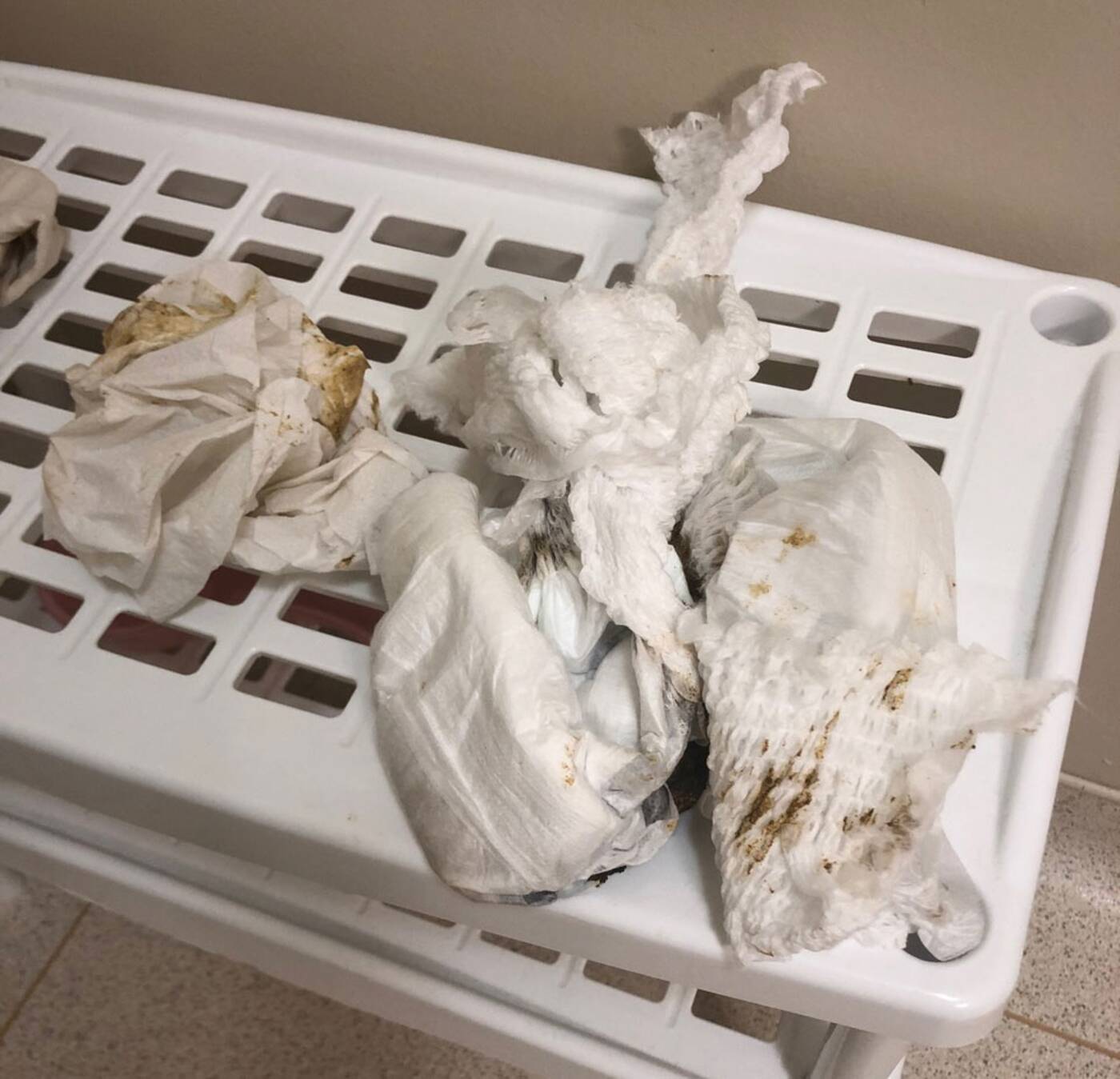 Sharon Chandar shared this photo of soiled diapers at the long-term care home.

Turns out her mother had a raging fever, although tested negative for COVID-19, and hadn't been eating. On April 21, Chandar was then given permission to go into the home to try and get her mother to eat.

"I took a look at my mom and I was mortified. I didn't know what I was looking at. I thought she was a cancer patient. She was ghastly white, her skin was dry, she was contorted in a pretzel. Her legs were bent out of shape, she was laying on her back moaning, and crying," she said.

Her mom had an infection in both eyes that had gone undiagnosed and untreated. She hadn't been fed anything but water in four days and had also developed pneumonia in both lungs.

"No one noticed any of this! I was bawling my eyes out because I'm leaving her in a nursing home and she's gone through so much in the last two years. She has no voice. She can't tell them that she's in pain or that she has pus in her eyes. All I see is she's flinching and I don't know why! My heart is breaking for my mom," she said through tears.

When the pandemic hit most of the regular staff left and were replaced with workers from temporary agencies and this caused even more problems.

"Nobody's around. There are supposed to be four people on staff," she said, describing her difficulties getting staff to get medication, assist residents in pain or to change diapers.

For example, after Chandar finally got antibiotics for her mother, the combination of her existing medication with the new antibiotics gave her mom severe diarrhea.

While Chandar brought up concerns that the mixture of drugs was problematic she was told it was "fine".

Yet, her mom was left sitting in her soiled diapers for hours and as a result developed open wounds and bed sores. None of which were treated, Chandar alleges.

"Every day I woke up I was afraid that they would stop me from coming to see her and that was the last time I would ever see my mom," she said.

Then one day Villa Colombo Vaughan told her she was no longer going to be allowed into the home to help care for her mother. But after she showed them a picture of her mother's condition she was granted a few more days.

On May 14, Chandar made the decision to remove her mom from the care facility to live out the rest of her days at home.

"My mother is my world. If my mom is going to die, she will die at home with dignity, love, and respect. I made a mistake to believe she was better off. I failed her when I put her in long-term care. I listened to others tell me it was the best thing for her. I put her life in the hands of a corporation looking for profits and cost containment. I failed her," she said.

Gloria is now back at home with her family, but many other people are still inside the long-term care facility.

According to Villa Colombo Vaughan's website, 18 people have died from COVID-19, but Chandar says many more died from lack of care.

"There's no care and they're left in the corner to die. This has been happening for the last two years to my mom and many other people. They are left in their rooms, confused, crying, suffering, neglected.  It has to stop! They deserve to be treated with dignity and respect,"she said.

She emphasized that it's not the nurses or PSW's fault, but rather places blame on the corporations who run the homes and the government.

"These PSWs and nurses are so undervalued. They're heros. This is the responsibility of the corporations and the government to be on top of it. They should be held accountable."

"My mother suffered because of the management and the ministry of long-term care is 100 per cent aware of what's happening. No one cares for the elderly because they don’t generate cash flow," she added.