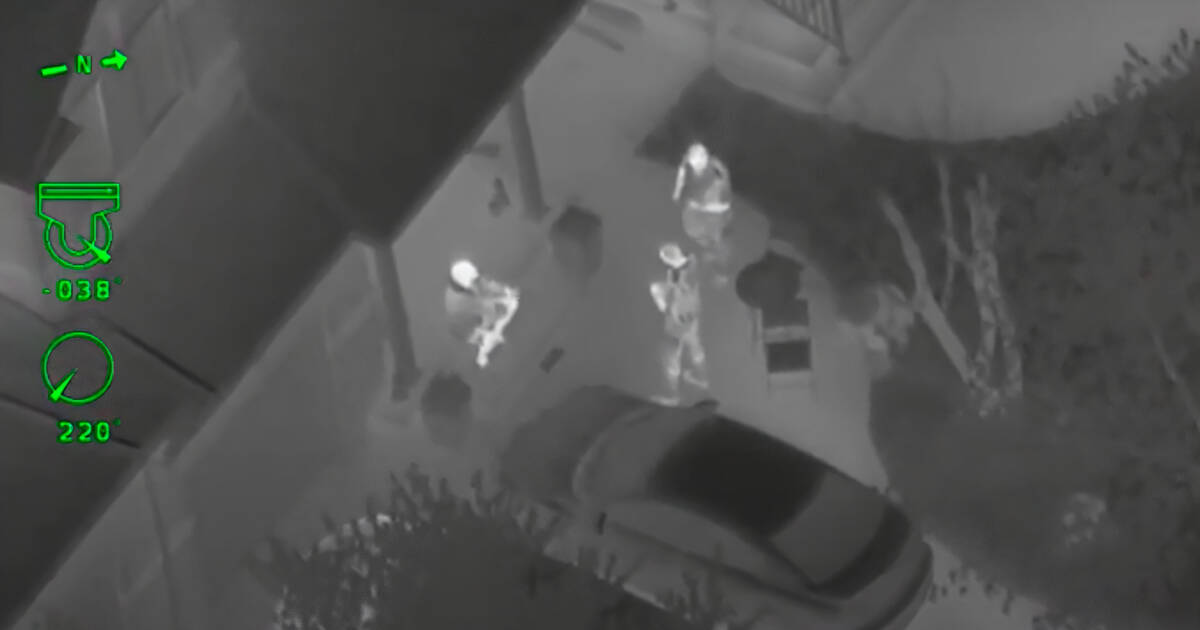 Two men — yes men, not teens — have been arrested and charged in connection with a series of what York Regional Police (YRP) called "laser attacks" on the force's Air2 chopper.

YRP said in a new release on Wednesday that officers were hit with lasers in three separate incidents, on three consecutive nights while flying over three different parts of the GTA.

It is not yet clear if the strikes were related, but they all took place between 11 p.m. and midnight.

Police released video footage from the first two attacks in an effort to show just how seriously they take these potentially fatal laser stunts, and how easily they can locate people from the sky when they want to.

The first attack happened on Thursday around 11:25 p.m. when the police chopper was on general patrol over Rutherford Road and Islington Avenue in Vaughan. Police say both the pilot and tactical flight officer were"struck by a bright light source."

Crew members "engaged in safety measures" and directed the officers to a residence where they believed the light had been shot. There, they found and arrested a 44-year-old Vaughan man. The suspect has been charged with mischief endangering life, endangering security of an aircraft in flight and unlawfully projecting bright light into navigable airspace.

A 52-year-old man was arrested on Friday night and charged for all of the above, plus obstructing police, after firing a laser at Air2 from the balcony of a hotel on Birchmount Road near Enterprise Boulevard in Markham around 11:55 p.m.

The sky cops had been assisting on a break and enter investigation at the time, and were able to work with ground troops to locate and arrest the suspect.

The third laser strike, which took place on Saturday around 11:30 p.m., happened while Air2 was on general patrol near Bathurst Street and Jefferson Sideroad in Richmond Hill. An investigation into the incident is ongoing and police have yet to locate a suspect, though it stands to reason that they'd very much like to.

"York Regional Police reminds the public of the potential harm laser pointers can cause," wrote the police force in its release on Wednesday.

"Health Canada warns that a split-second look into a laser pointer can result in a condition called flash blindness. This is similar to the effect you get during flash photography, where the image of the flash remains in your eyes for a few seconds, then fades away."

"However, for a pilot in control of an aircraft flying over populated areas, the consequences can be very serious," YRP's release continues.

"Those who aim these pointers at aircraft are putting lives in danger, not only in the aircraft but on the ground, as there is a significant potential for harm to the pilot as well as the prospect of a crash."