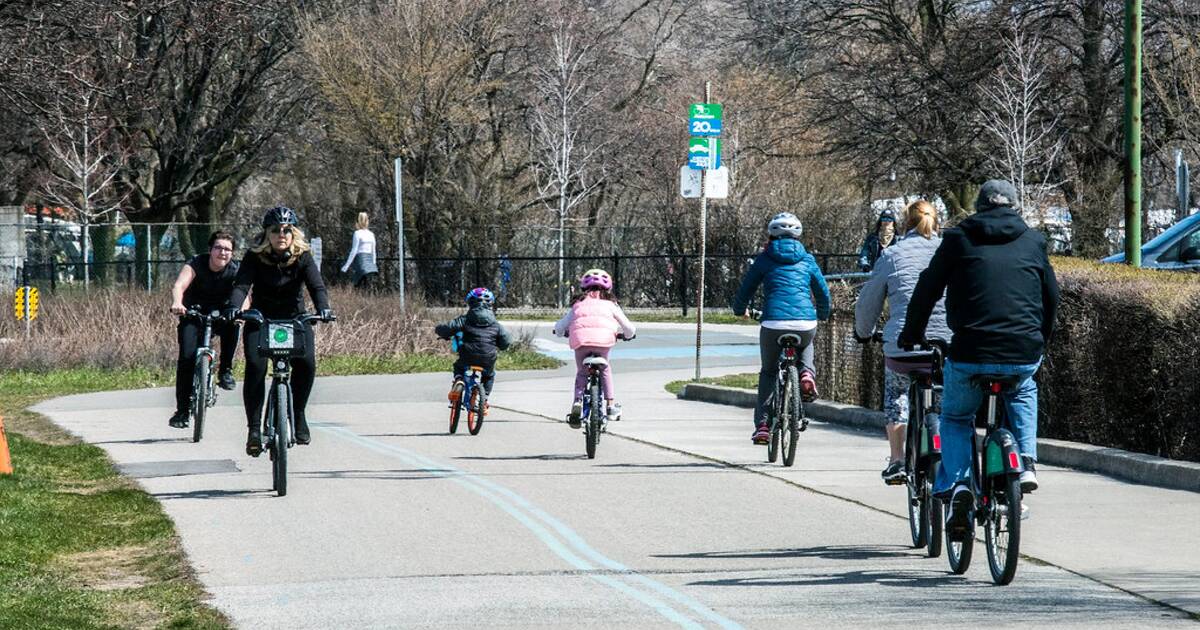 Toronto officials have been working on a plan — titled ActiveTO — to give pedestrians and cyclists more space to safely spread out while enjoying the outdoors amid the pandemic. And while the pedestrian part of the plan has been wildly successful thus far, details of the cycling section have only just emerged.

The City announced this morning that a staff report, which is scheduled for consideration by City Council later this week, proposes expanding key parts of the cycling network for a total of 40 km of expanded and accelerated routes.

This includes the installation of approximately 25 kilometres of new bikeways as well as additional cycle tracks on routes in the council-approved Cycling Network Plan, as part of the ActiveTO program.

#ActiveTO is creating more safe space for cyclists and pedestrians all around Toronto. Accelerating our cycling network and creating temporary lanes that make safer, more connected routes for people on bikes will be a key part of our city’s restart and recovery plans. pic.twitter.com/u90iErFUlH

"An expanded cycling network aims to allow people on bikes to move around Toronto safely, to better connect those on bikes to the places they need to go, and to mirror major transit routes," reads a City release about the announcement.

"The proposed plan includes flexibility so that bikeway installations can be adjusted based on considerations such as changing traffic volumes, and the evolving needs of residents and businesses in the wake of the pandemic."

In addition to these projects, the City is also proposing the acceleration of the Bloor West Bikeway expansion, which would see new cycle tracks on Bloor Street West, from Shaw Street to Runnymede Road.

The staff report also addresses other gaps in the network, including locations in North York and Scarborough.

If approved, the cycling network would be expanded quickly through temporary installations by repurposing curb lanes along several key corridors, according to the City.

Bloor Street East, University Avenue/Queen's Park Crescent and Dundas Street East would be among the first installations, and most of the additional lanes and tracks would be built with temporary barricades and include minimal change to the existing street design.

"While vehicle traffic volumes are currently very low, City traffic data shows that a significant number of people have continued to rely on cycling as an important transportation choice over the past several weeks," notes the City's release.

"The data also suggests that many people are choosing cycling instead of riding transit, and typically cycling volumes in Toronto increase as temperatures warm up."

Cities across the world are opening up streets to create more space for safe physical distancing. Expanding our cycling grid is the right thing to do — for our health care workers, for our own mental and physical health, and for the health and safety of our city.

As a part of ActiveTO, the City is also in the process of creating more than 50 km of "quiet streets," which are neighbourhood streets that are only open to pedestrians, cyclists and slow moving, local vehicle traffic.

The City has also been closing portions of major roads adjacent to trails on weekends and holidays to make space for people and ensure there's room to be physically active and respect physical distancing.

"We know how to make our roads safe for cyclists. We know that we need to build an expanded, city-wide grid of protected bike lanes, so that people can get to work and across the city without fear," said University-Rosedale City Councillor Mike Layton in the City's release.

"Along with community groups and local residents, we have been advocating for a protected bike lane along these routes for some time. Now, it's clearer than ever that we need to act – not just to protect cyclists, but to facilitate physical distancing and reduce virus transmission."