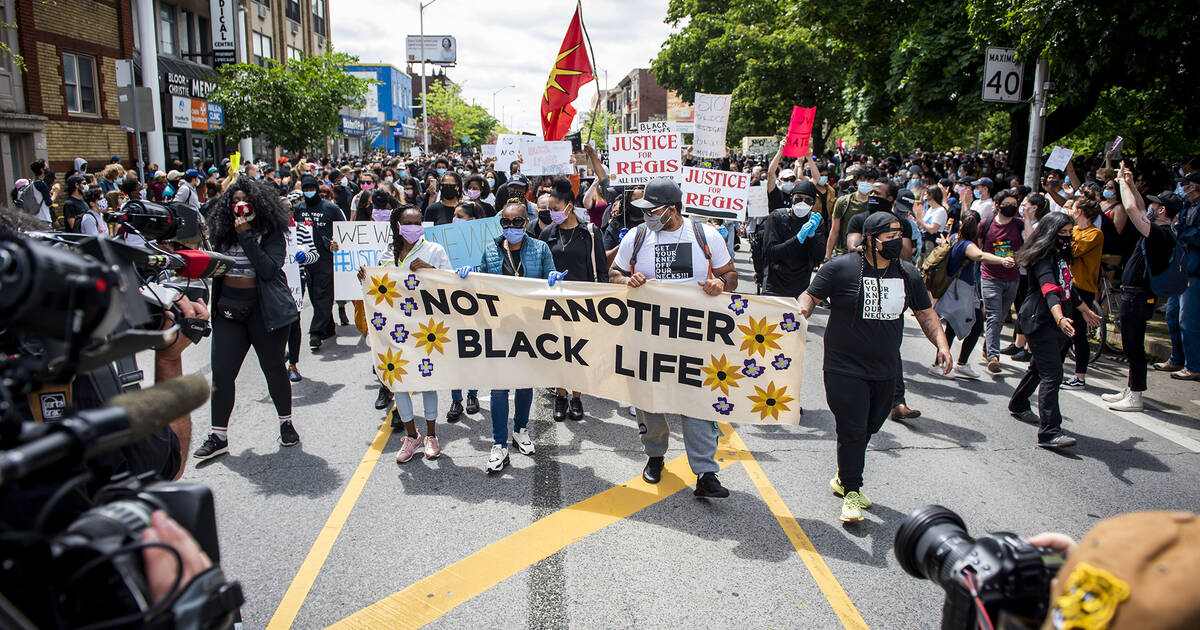 Supporters from across Toronto and beyond took to Christie Pits park Saturday afternoon to march for Regis Korchinski-Paquet, a 29-year-old woman who died after falling from the 24th-floor balcony of a Toronto apartment on Wednesday evening.

Not Another Black Life, the group behind the rally, reiterated throughout the day that it was a peaceful protest to respect the wishes of Korchinski-Paquet's family.

The voice behind this speech is that of artist, activist and educator @Keoshaloveee. Learn more about the important work she does here: https://t.co/6x2LoKdF6q #JusticeForRegis https://t.co/d8RFFJIBBy

Thousands of attendees were required to wear PPE and instructed to maintain a six-foot distance from others.

Sounds from the protest in Toronto today as marchers made their way along Bloor St. #TorontoProtest #JusticeForRegis 📹 Imani Walker pic.twitter.com/PHHDYAAwx6 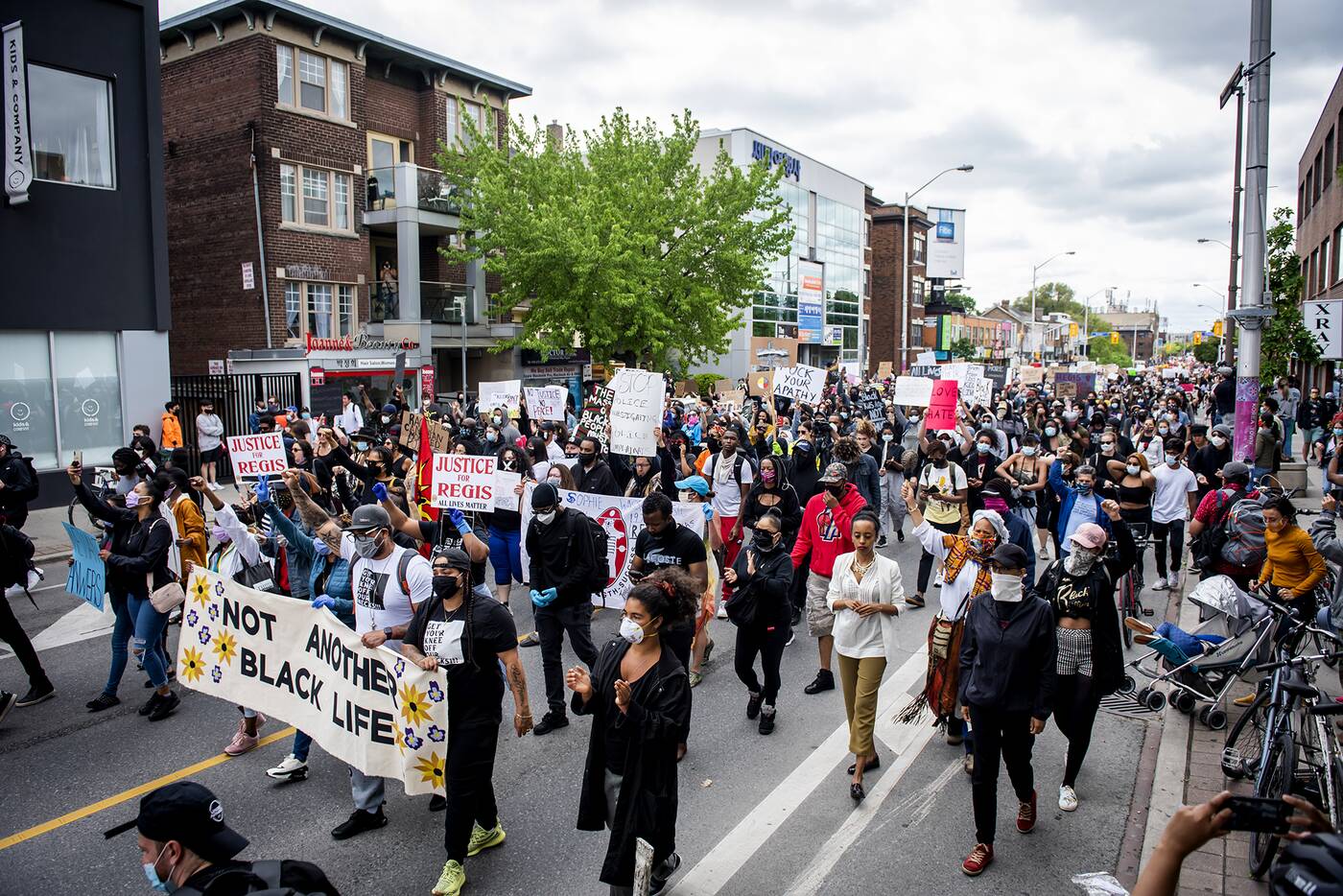 Yet, the cause of Korchinksi-Paquet's death is still unclear because she was alone in the apartment with police officers at the time. Initially, her mother, Claudette Korchinski​​​​-Beals, called the police to get help for Korchinksi-Paquet, who was in a state of distress. 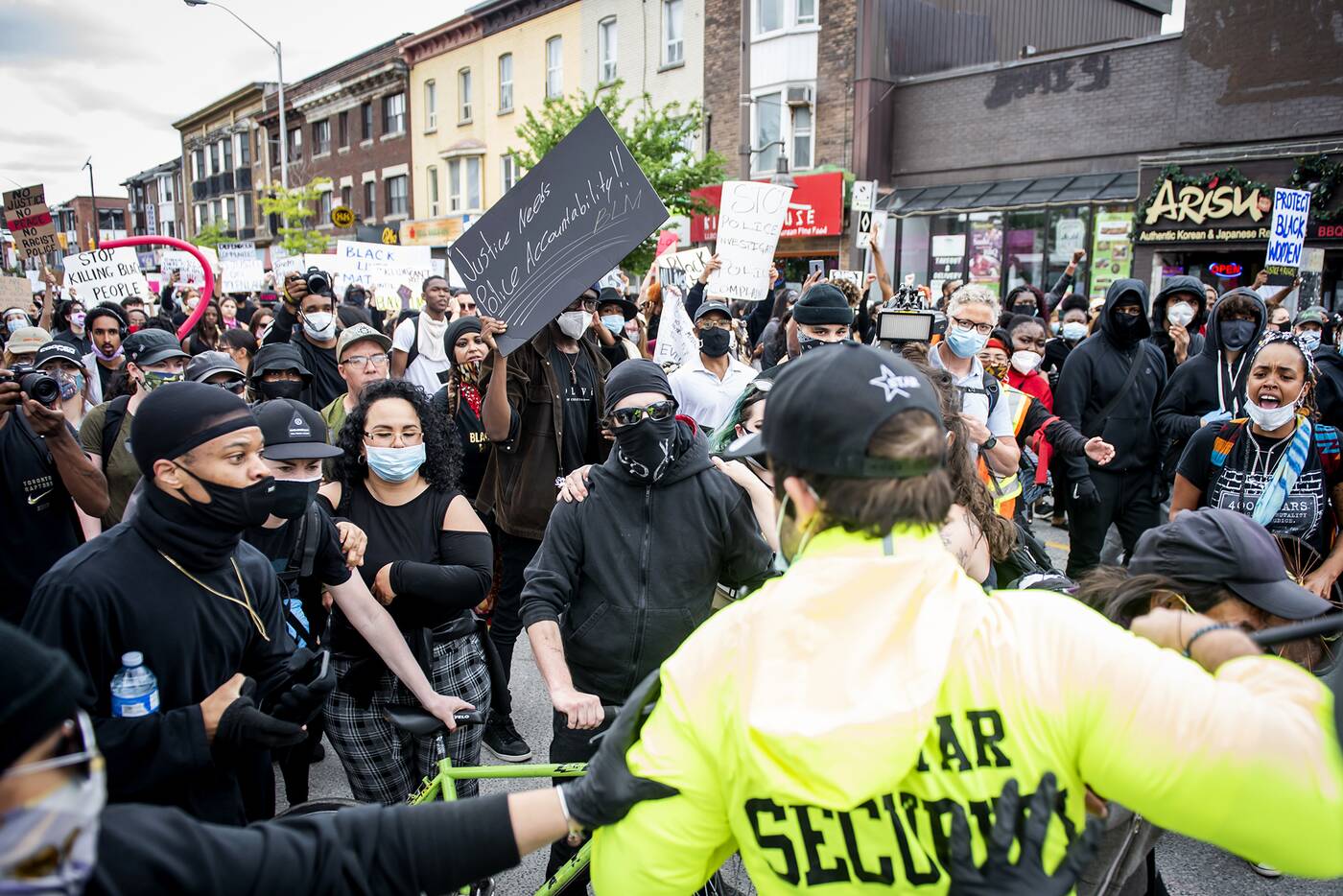 The Toronto police have not disclosed information because the Special Investigations Unit, Ontario's independent police watchdog, is now investigating the case. 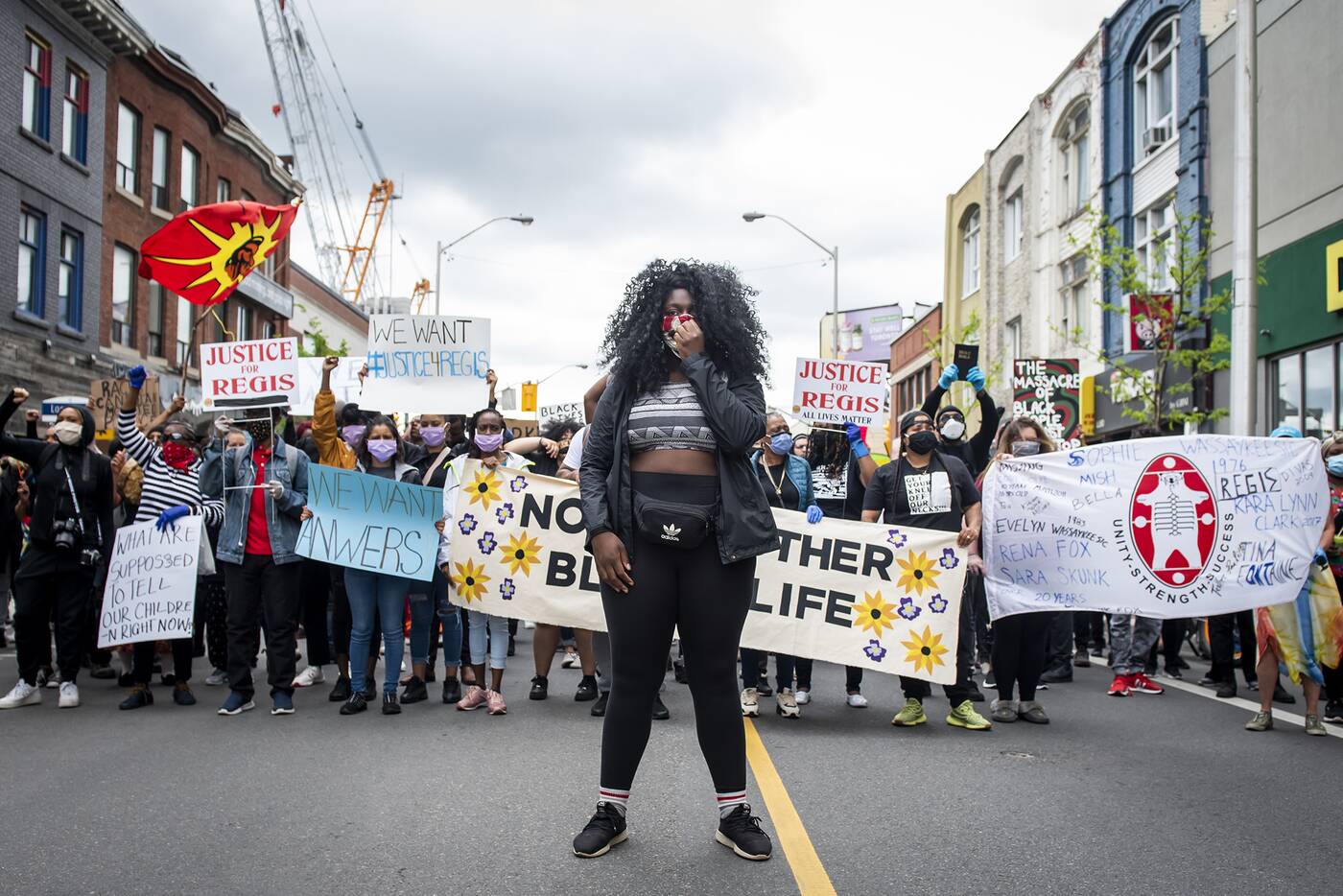 "A lot of times when people call the police for mental health issues, it ends in death — and it shouldn't," said Latina McLean, a supporter at the rally. 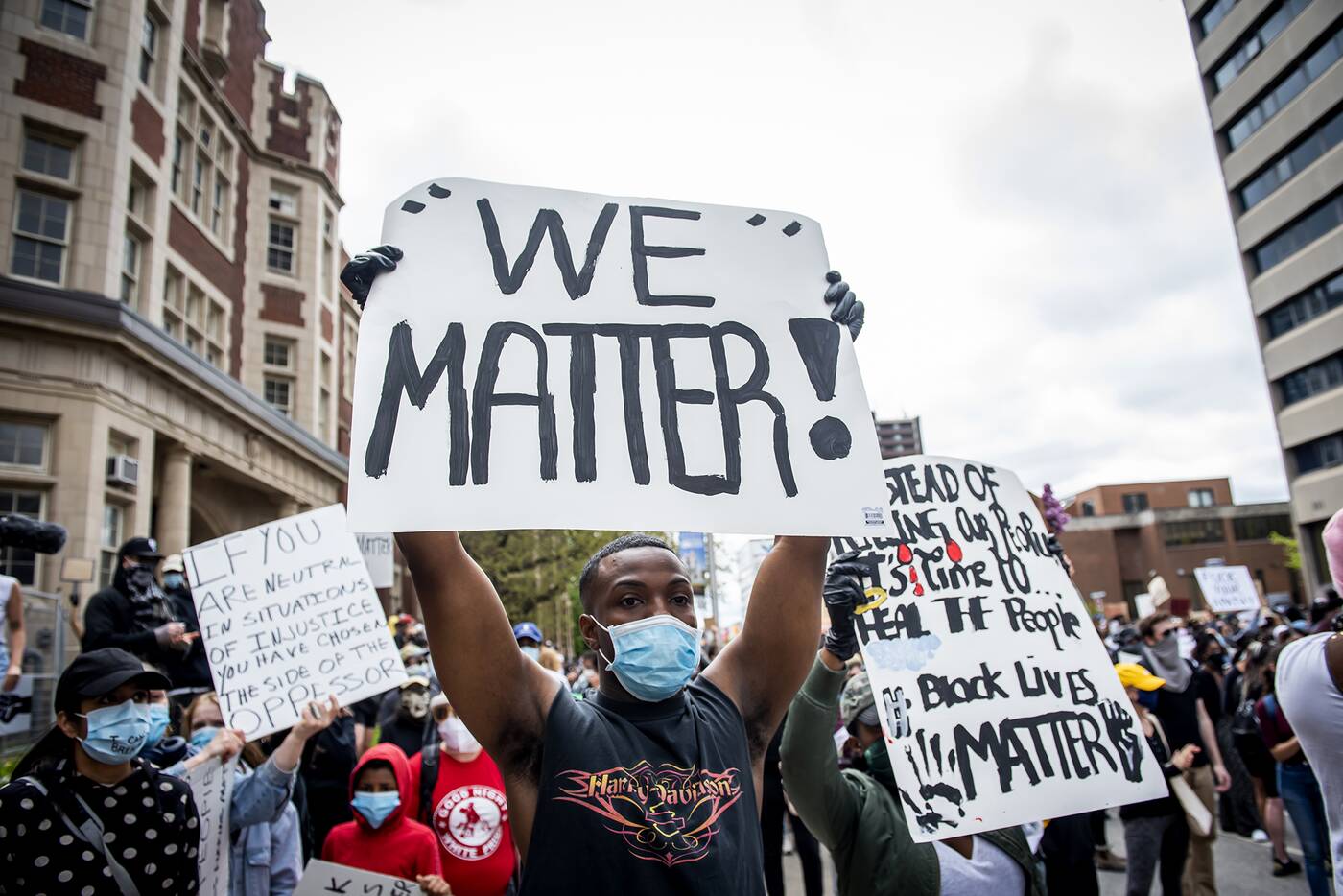 McLean pointed to better training for the Toronto Police as a solution because she says the police in this country are not equipped to handle mental health cases. 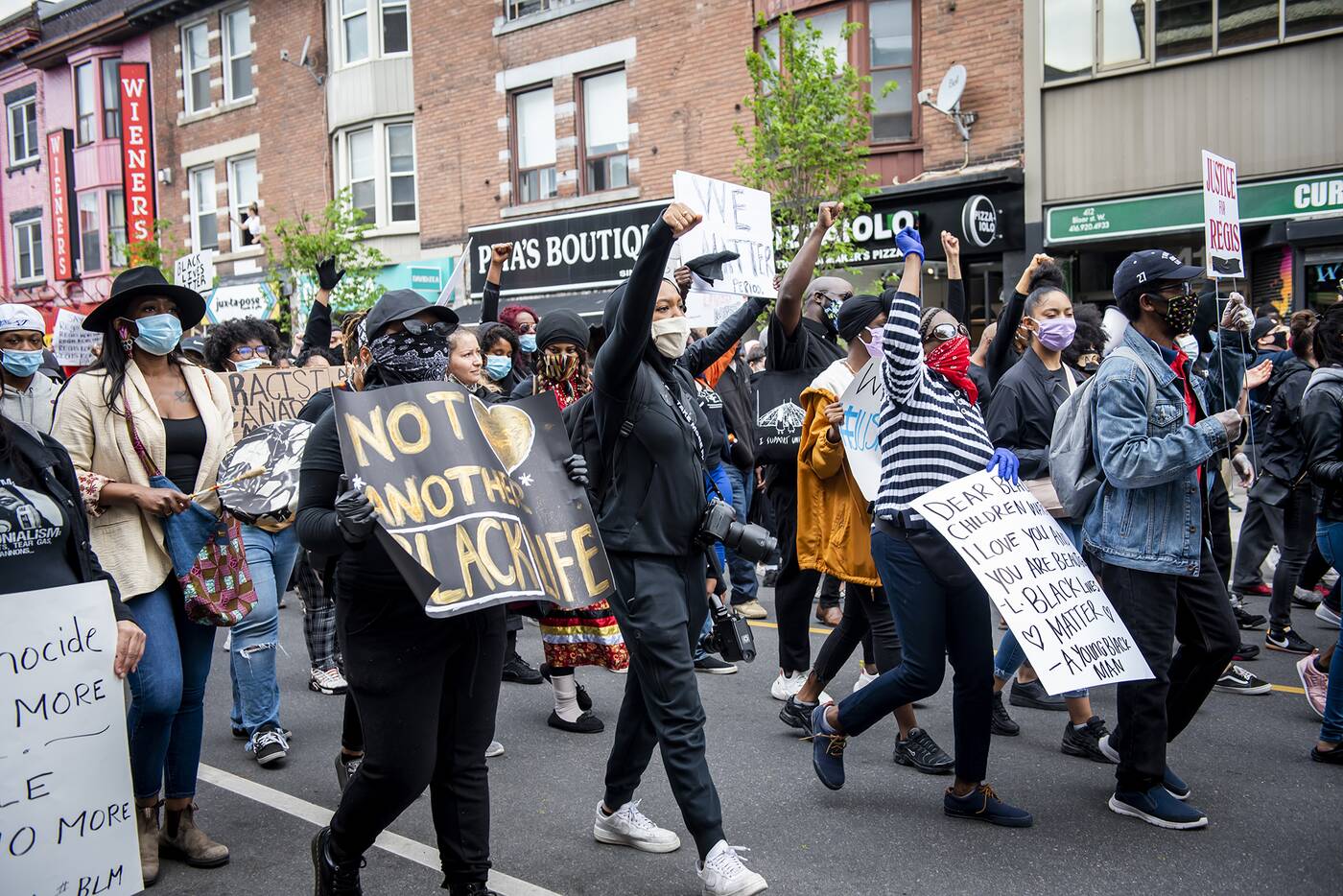 "Jermaine Carby was killed by Peel Police in Brampton in 2014 after a mental health crisis. The families are still fighting for justice. So I don't trust them (the police)," said McLean. 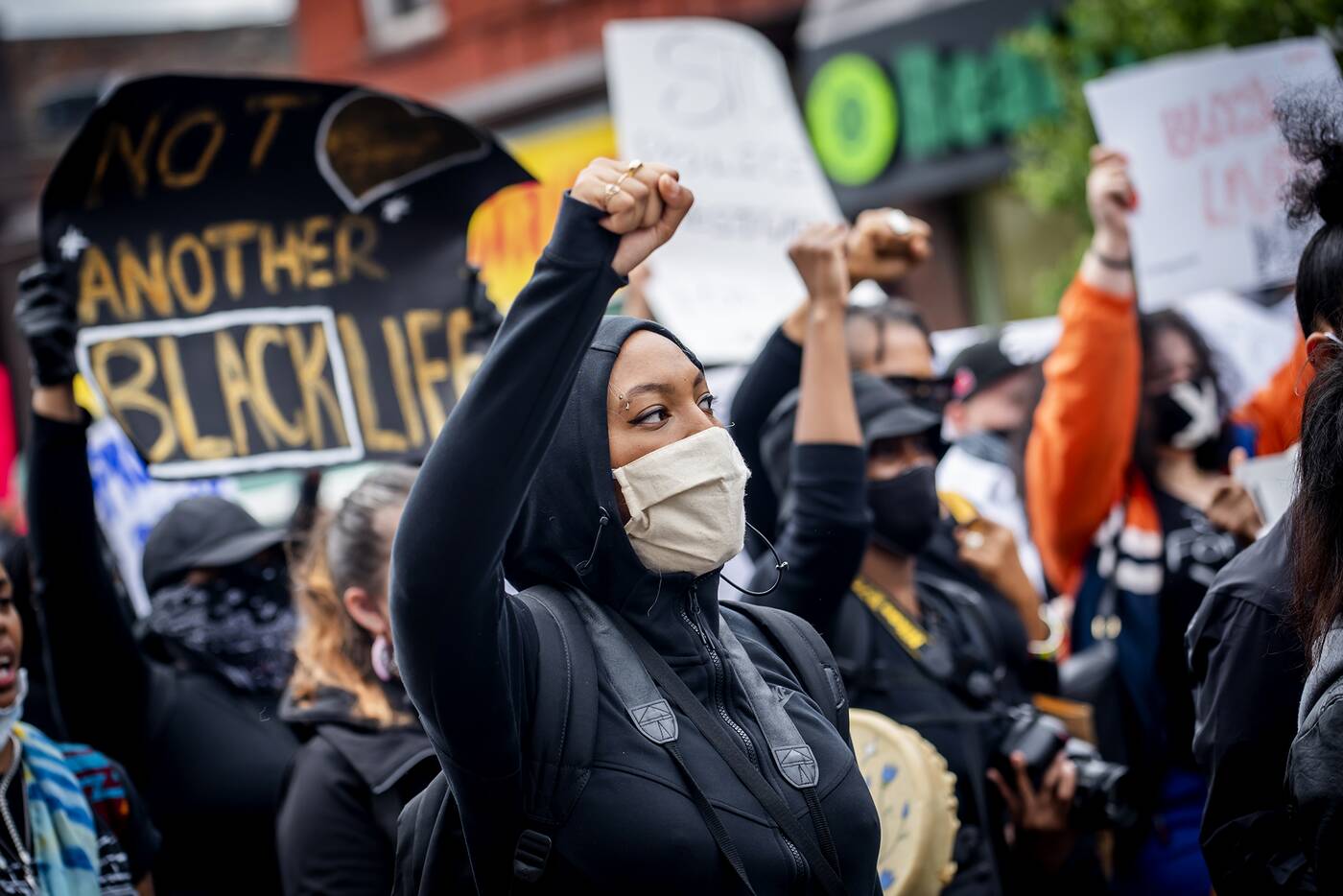 The sentiment of not trusting police was shared by many at the rally, including those with mental health concerns of their own.

"As someone who has their own mental health issues, I don't trust the police. You're taught not to. I came out to make a demonstration to show some accountability is needed," said a demonstrator who only identified as Cocoa G. 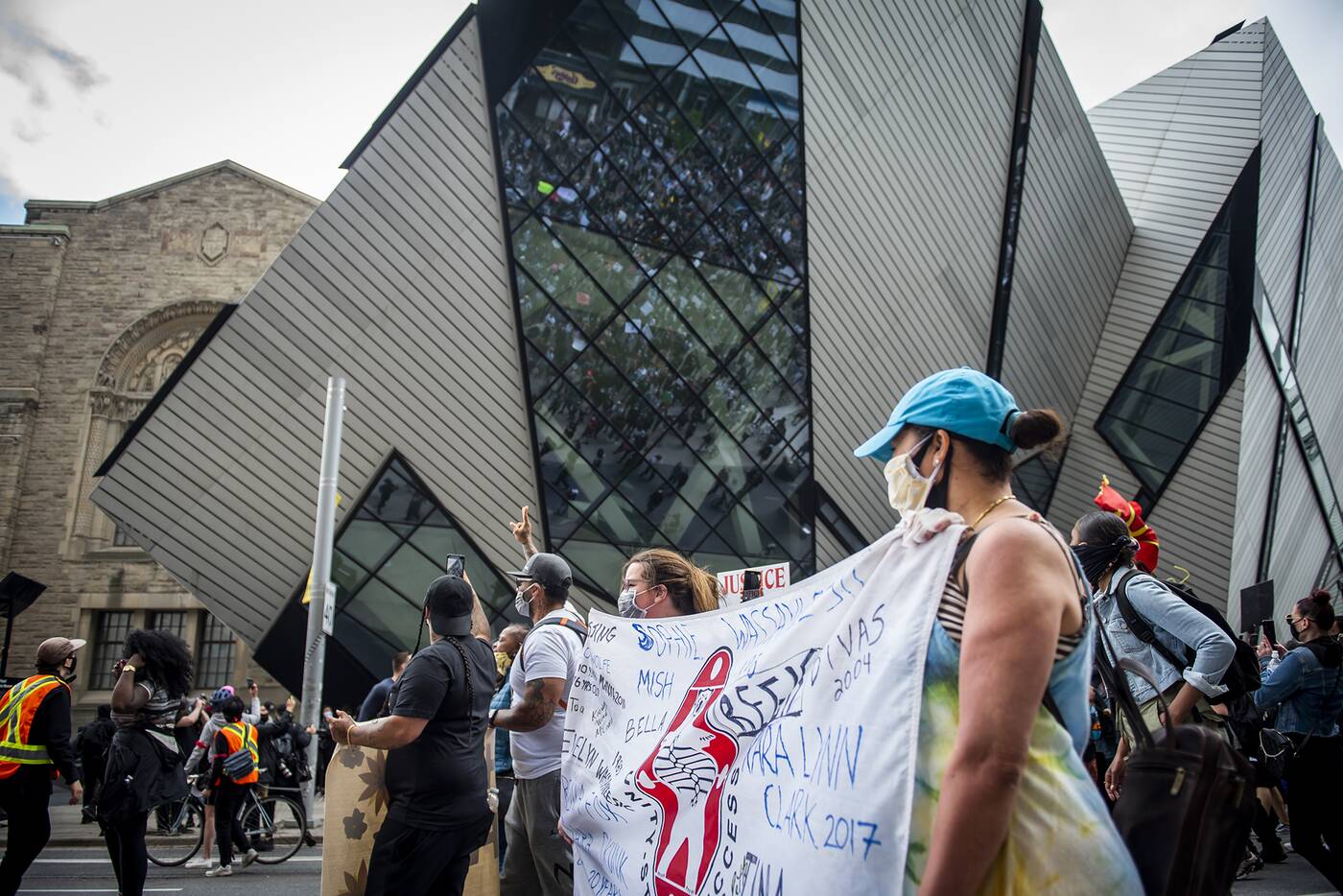 The rally also called on Toronto Police to reexamine its relationship with the Black community.

"Justice for Regis. Rest in peace Regis. We're here to spread the message that racism does exist in Canada, it's in your own backyard. We need people to stop being ignorant. I encountered it personally many times," said CJ Mayers who travelled from Brampton to attend the rally. 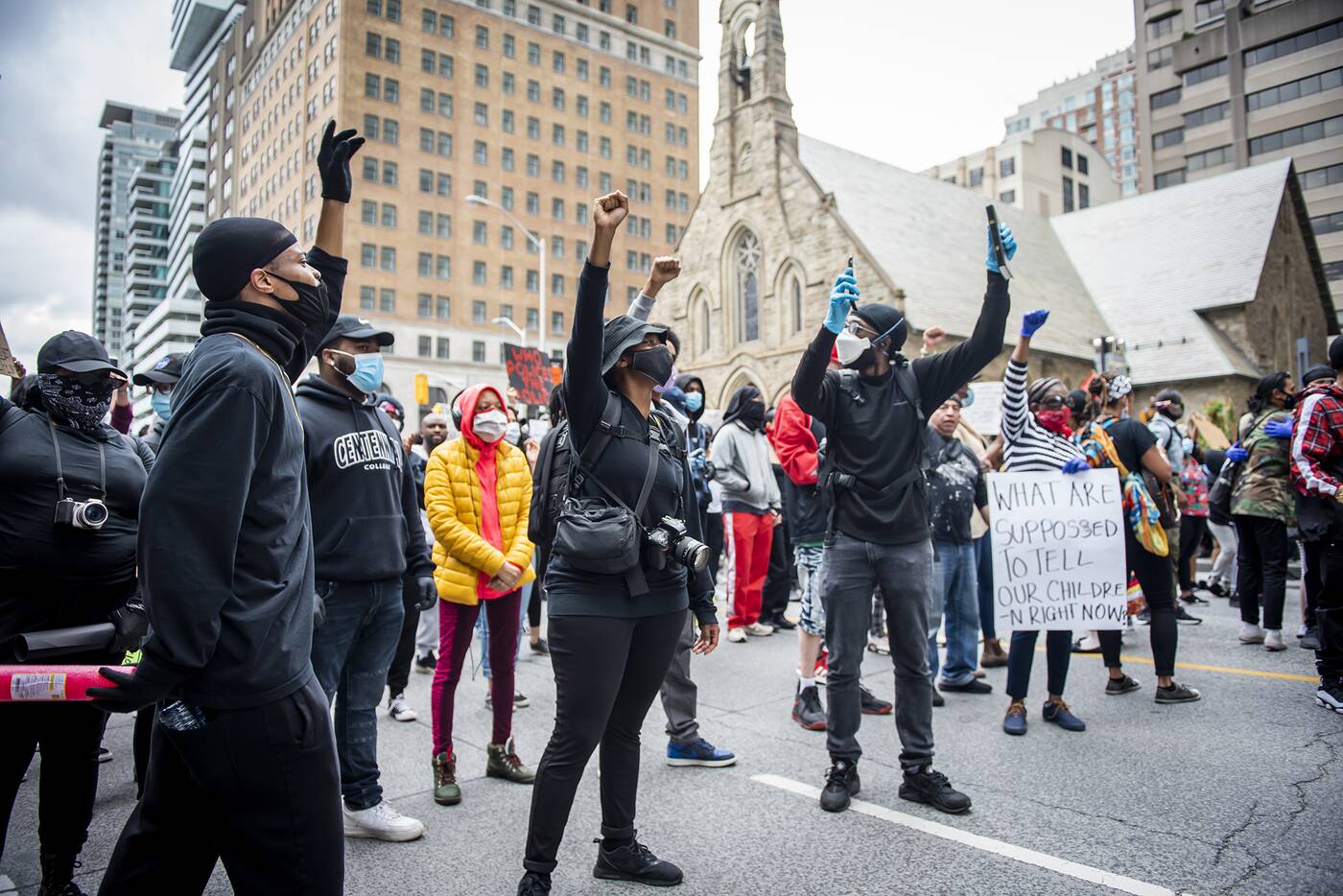 A day prior to the march, Mayers made headlines after a man showed up to his home and hurled racial slurs at his family.

"If that didn't happen to me, regardless I would have come out today because I want there to be real justice. We need to come together and unite — we're seeing the whole world protesting right now,” said Mayers, referencing the Black Lives Matter protests in Minneapolis.

"Stop killing us!" Current situation in downtown Toronto. Tension is at the maximum after an enormous peaceful march, a group of people decided to stay in front of Police museum three days after the death of Regis Korchinski-Paquet. #JusticeForRegis #BlackLivesMatter pic.twitter.com/9RqrGJJKga

Still, Toronto Police are asking people to refrain from a rush to judgment.

"Unfounded allegations that police officers pushed a woman to her death from a balcony, in the absence of evidence or fact, perpetuate a false narrative that the police are the enemy," the Toronto Police Association said in a statement regarding the Korchinski-Paquet case. 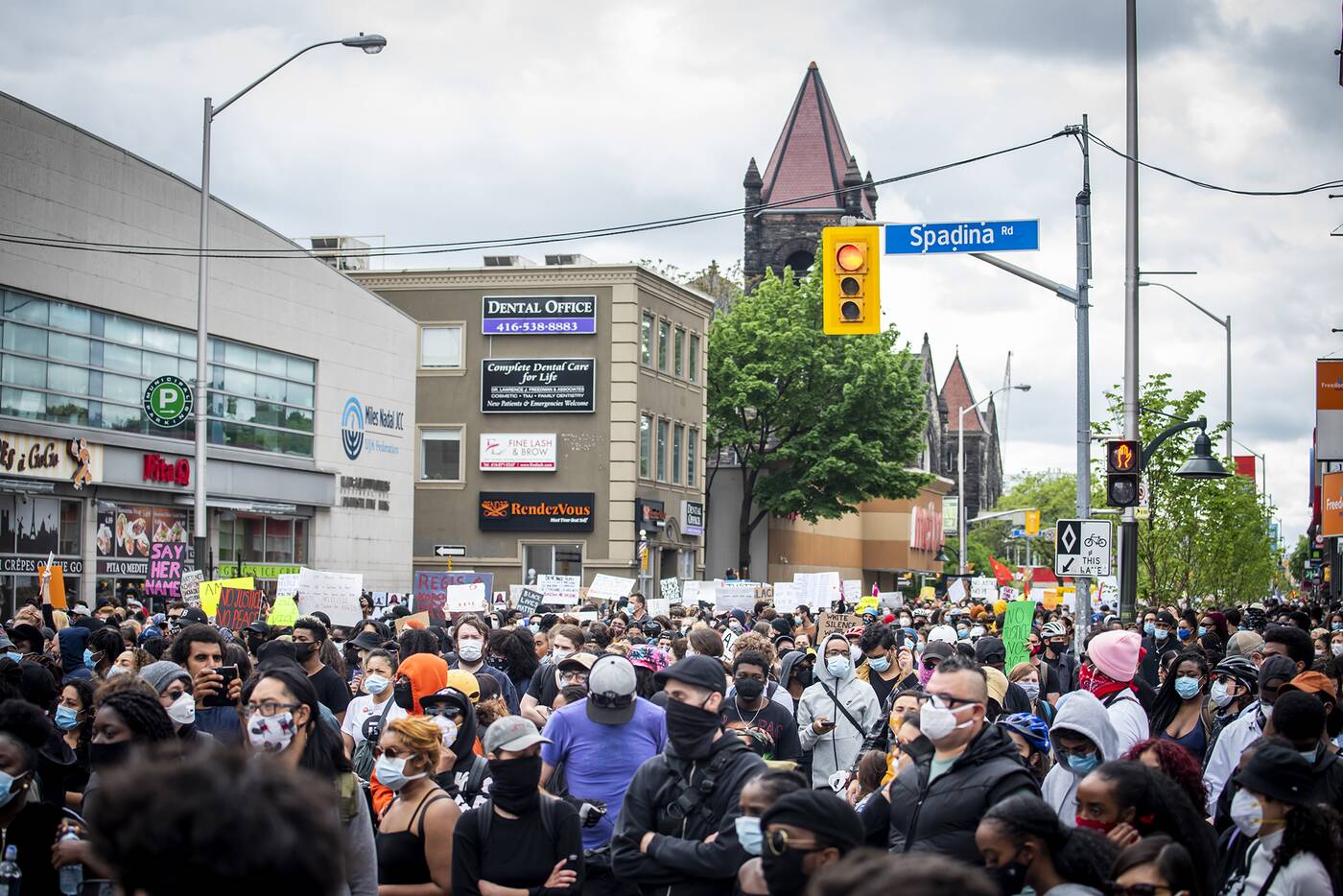 The rally was diversely filled with people who had suggestions of their own for Toronto Police.

"The more and more money that they make, the more complacent they get. The TPS budget grows higher and higher every year. They keep getting more money and that keeps telling them what they're doing is okay," said Thomas Speta, who says he attended the rally as a White ally, while holding a sign that read 'Defund the police.' 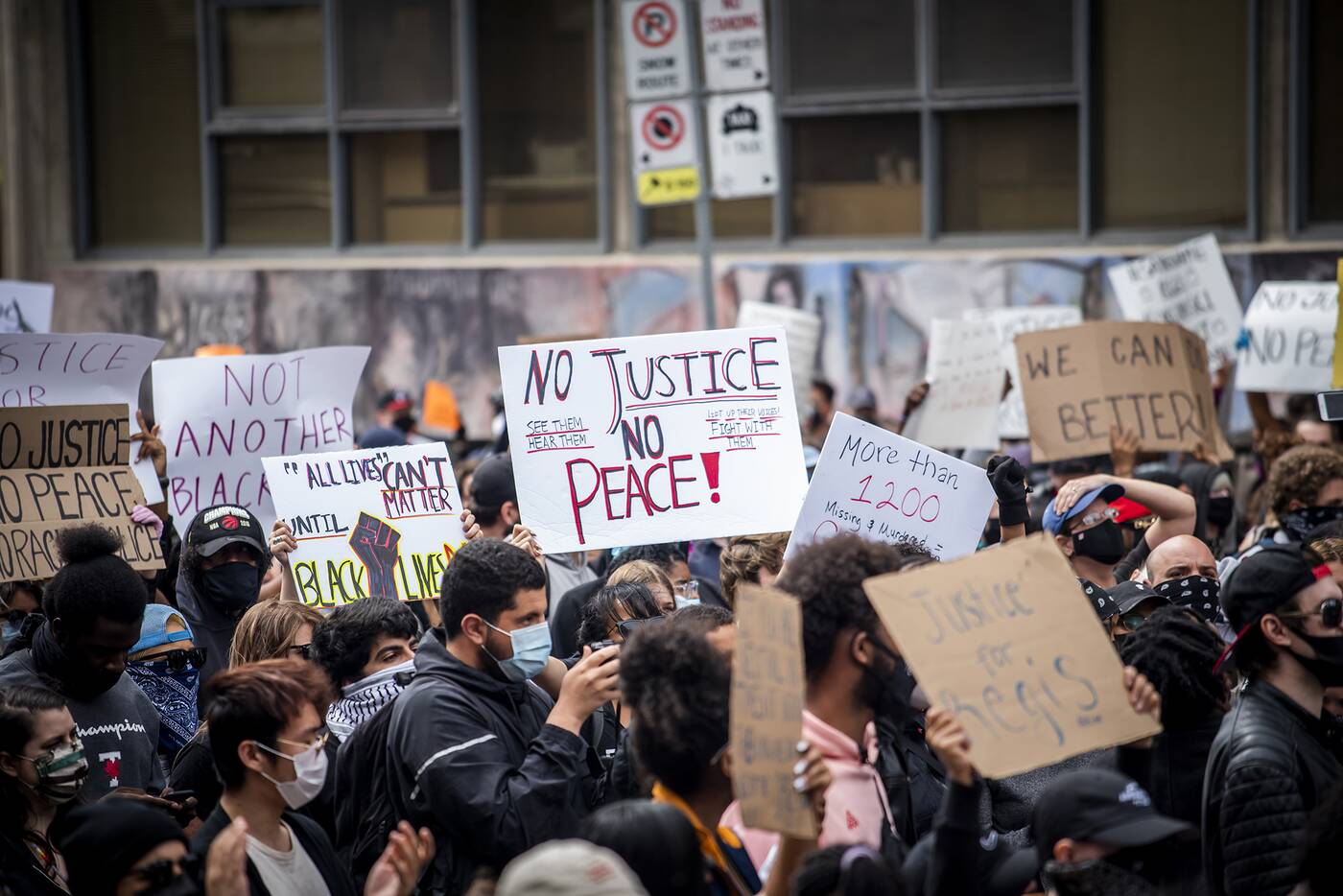 The SIU investigating the case of Korchinksi-Paquet is described as a civilian law enforcement agency which investigates incidents involving police officers where there has been death, serious injury or allegations of sexual assault. The unit is independent of the police. 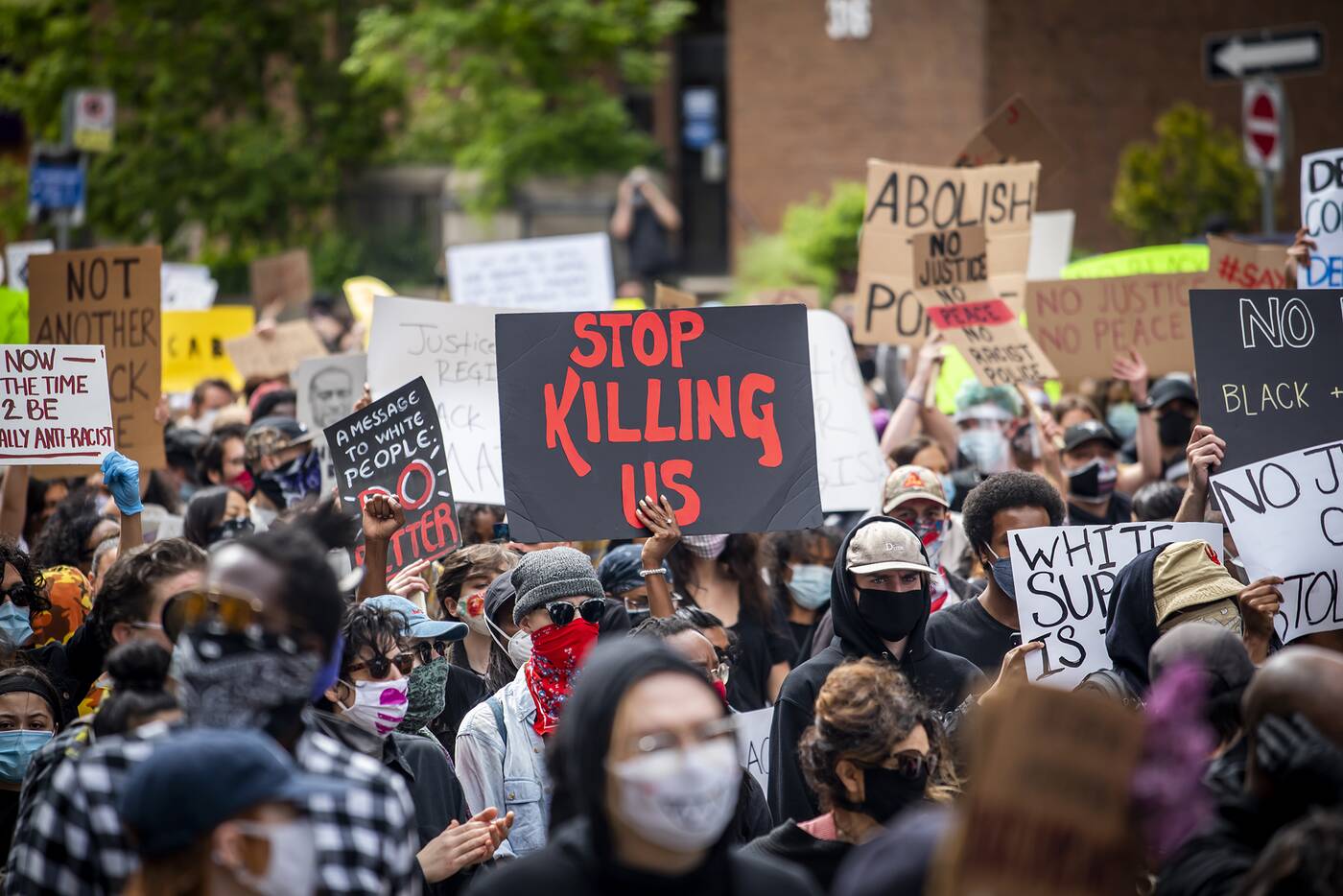 In their statement, Toronto police also expressed, "We are aware that this narrative, speculating on the events leading to Ms. Regis Korchinski-Paquet's death is circulating on mainstream and social media" and "The TPA supports a full and transparent SIU investigation."

Yet, for attendees of the #JusticeforRegis march, this is a narrative that's been echoed far too many times. 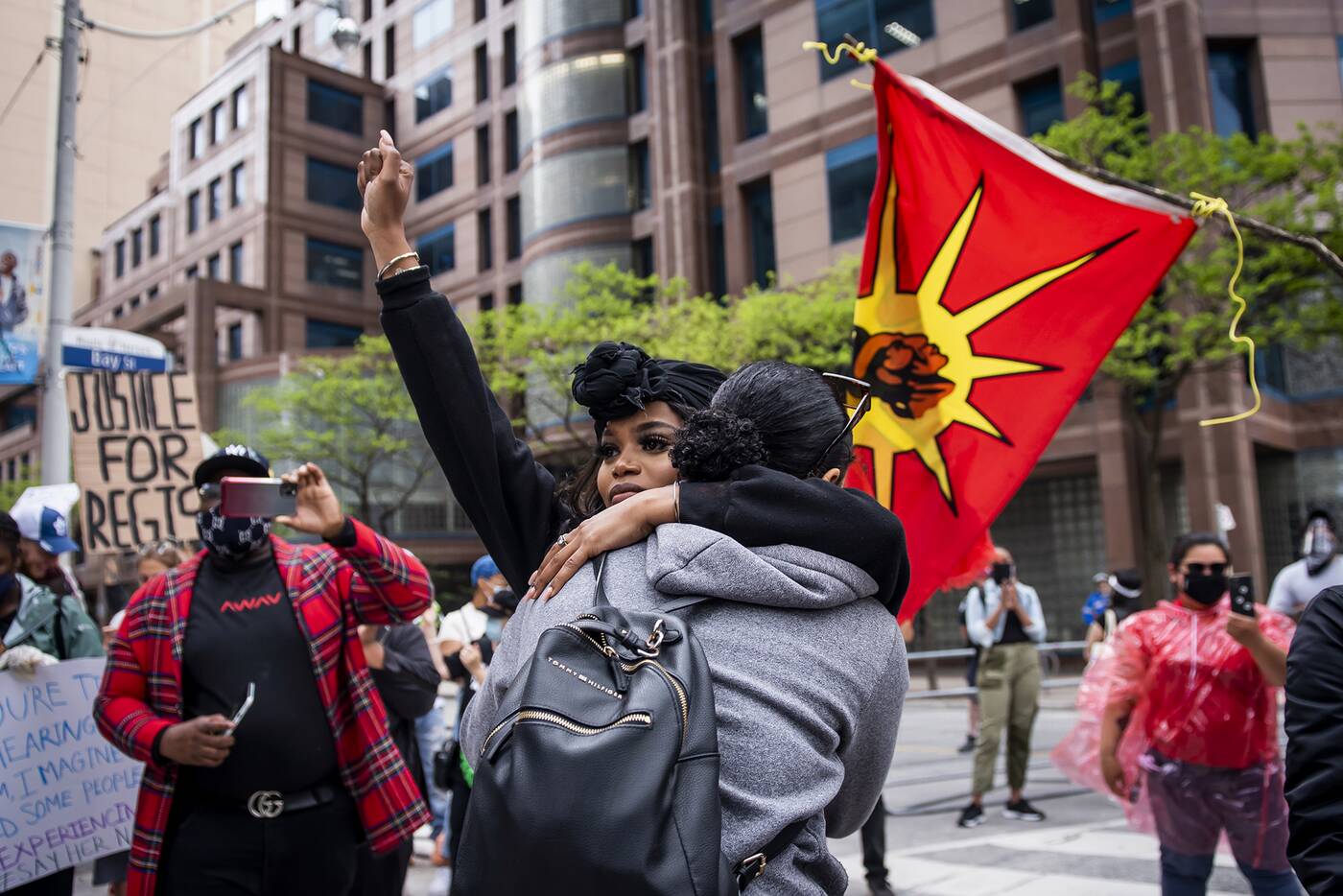 "No one was there with her, only the cops. That means anything could have happened. Why did she end up dead? Police are supposed to help people, help calm them down and protect them but why did her body end up over the balcony?" said Tthi Lung of Asians for Black People, a group that attended the rally as allies and handed out PPE. 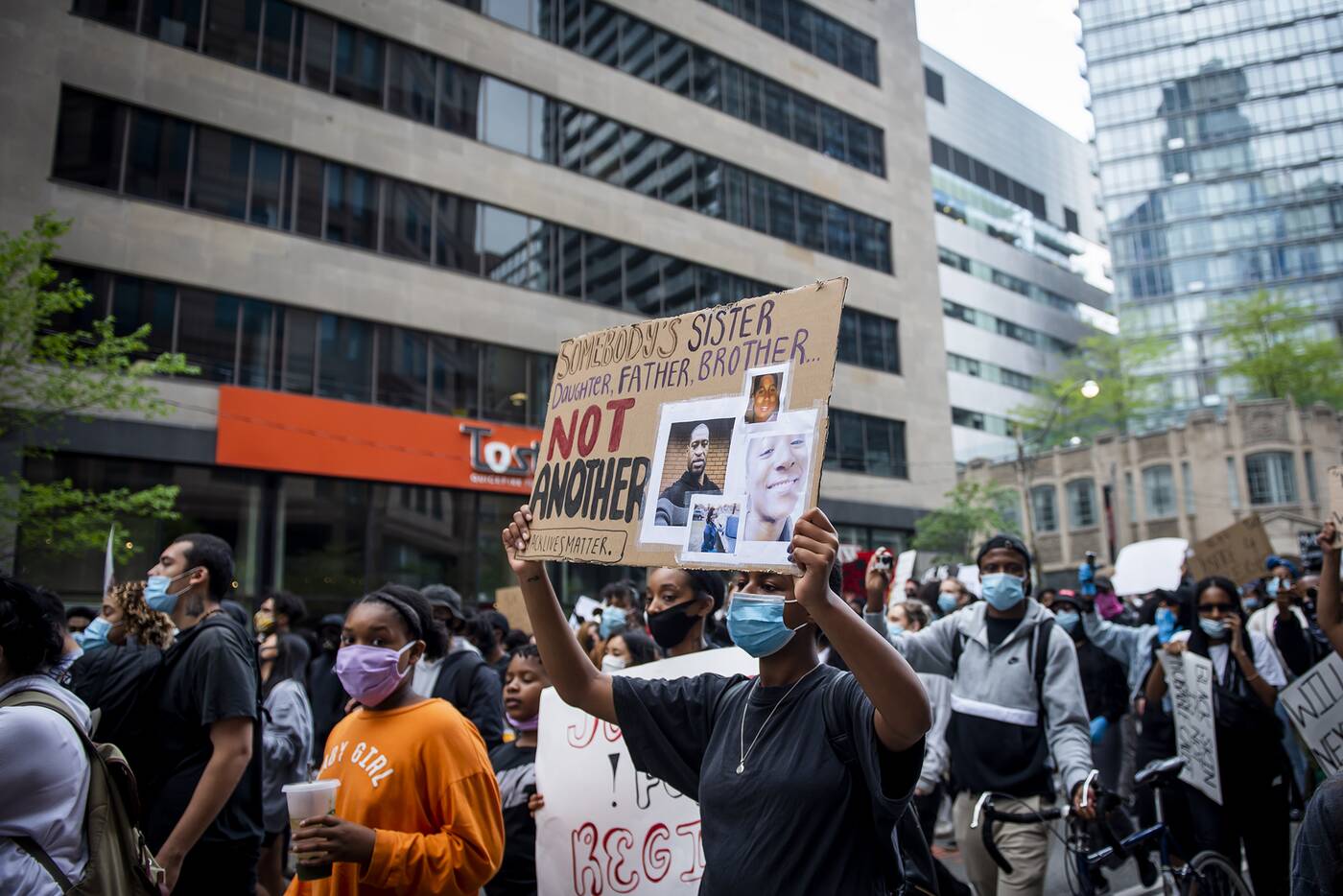 The rally made its way down Bloor and Bay Streets, before ending in front of Toronto Police Headquarters near Bay and College. 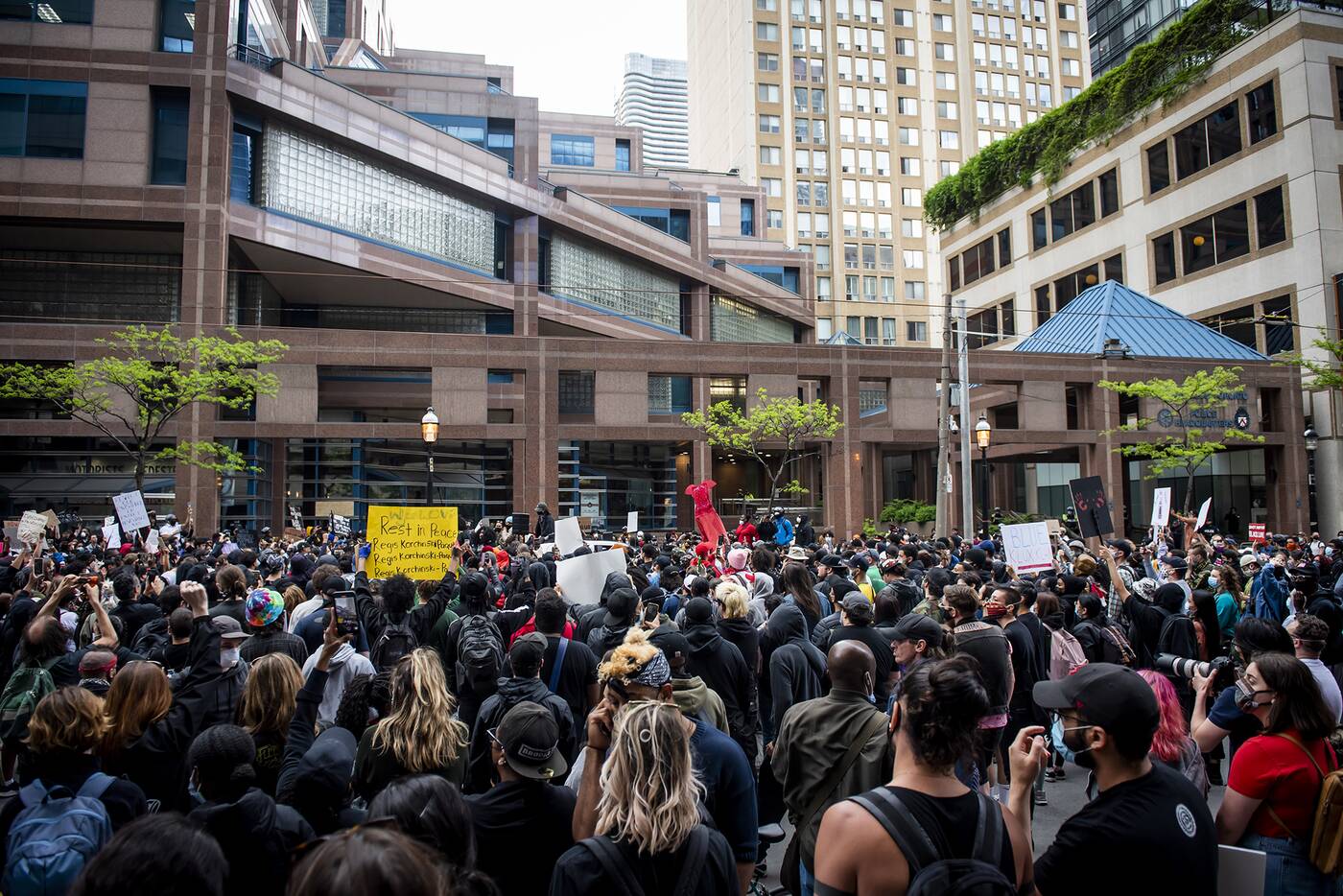 As the public awaits an outcome for the case of Regis Korchinski-Paquet, one thing is certain: the Black community in Toronto wants change and won't be silent about it. 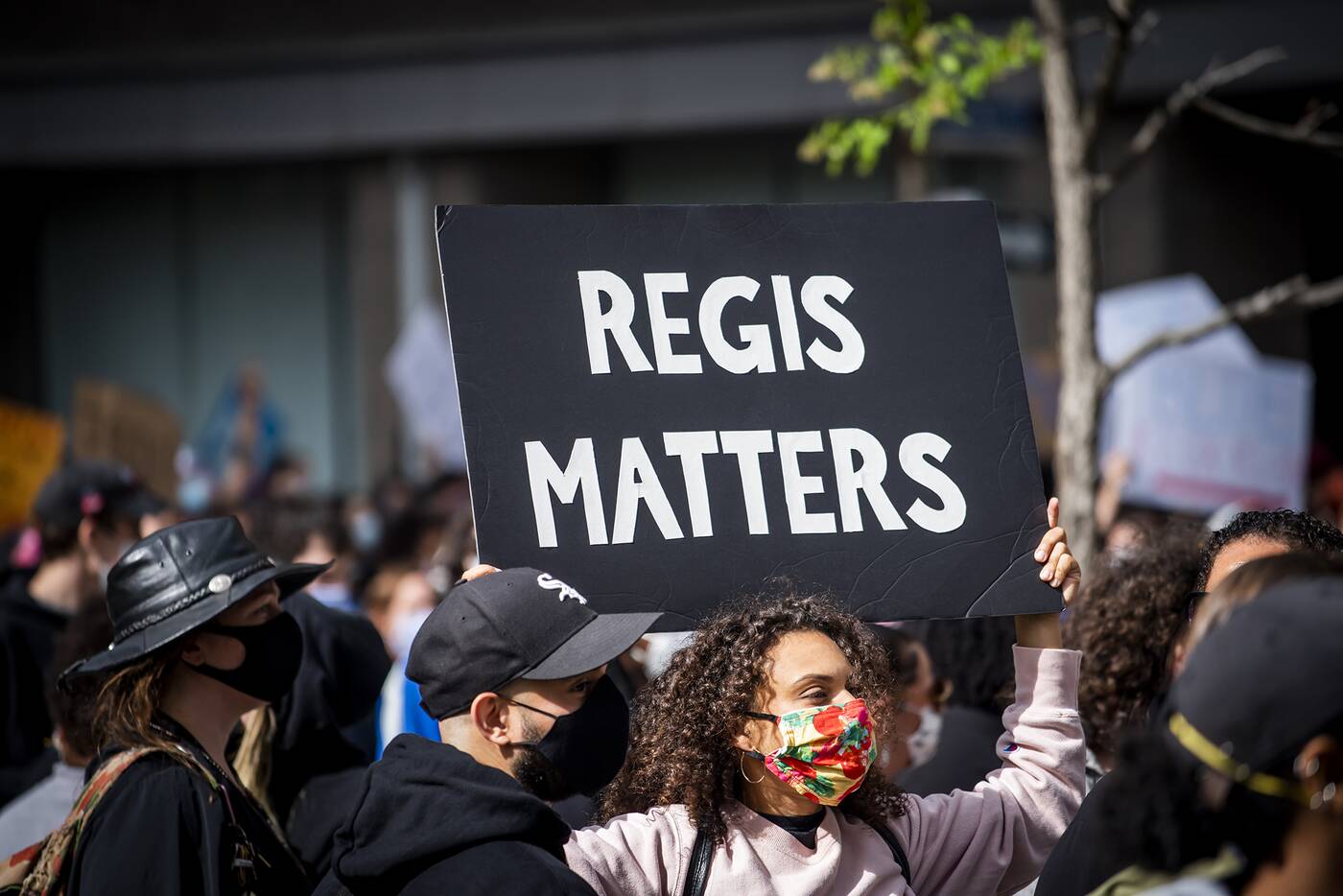 by Imani Walker via blogTO
Posted by Arun Augustin at 8:48 PM