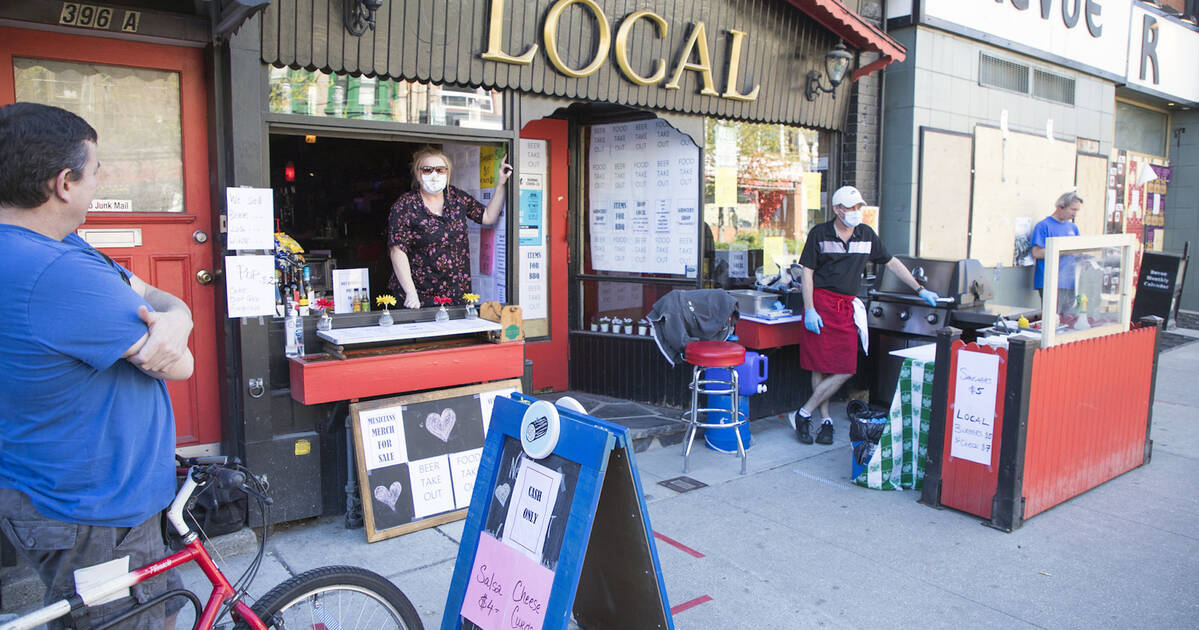 Restaurants in Toronto are taking their service to the sidewalk while they're still not able to open or extend their businesses to socially distanced patios.

The state of limbo for local restaurants has led to curbside cookouts and garage door windows opening to sell booze and food, especially as the weather starts to get warmer.

Wenona Lodge has been temporarily closed up until last Thursday, when they began serving food and booze out of their roll-up garage door window from behind a chalkboard menu, and they've "had a great start" according to owner Phil Cacace.

"Having a roll-up window, and being in such close proximity to Dufferin Grove, we felt that we were in a position to make a run at the takeaway model," he says.

"I think we've really nailed it with our park-friendly Muffuletta, something that my dad used to make us for school lunches. Goes really well with a couple cold cans of beer."

The roll-up window gives Cacace peace of mind since patrons don't have to step inside to be served, and he says that they have plans to keep expanding the menu and that it "feels great to be back in the restaurant."

Some people are trying out experimental pop-up ideas at this time, like Danny Barna's Larb Shack, which appeared in the Canis space after Danny Barna collaborated with local restaurateur Mark Kupfert to reach out to Jeff Kang (of Canis) to ask to use the restaurant for the concept.

Larb is a kind of Asian meat salad, and there were already lineups down the block for contactless takeout on their first day, May 22.

"It has been interesting to launch a pop up in the time of COVID and social distancing," says Gigi Rabnett, one of the co-founders of Larb Shack. "We thought everyone ordering was respectful, kept their distance, and were super polite. It was nice to see and felt very Canadian."

Hours of our Pop Up Shop: Friday May 1st - Monday May 4th 2:00pm - 6:00pm Cash Only More details, with further dates & times TBD . Stop by this weekend, say hi 👋🏻 and pick up a treat for yourself!! #missyou #roncystrong #wegotthis #GLB #thelocal #shoplocal #roncesvalles

The Local and Petty Cash have also been doing curbside cookouts, setting up BBQs in their front patio areas.

At The Local there have been items for sale like groceries and booze in addition to takeout burgers, and Petty Cash has been selling $10 BBQ plates, margarita kits and beer.

Last year, Wynona Skydome was being prepared for dinner service. This year, we'll be transforming our patio into a one day Pop Up Bottle Shop tomorrow! 😷😎☀️🍷We'll be offering bottles from our wine list, fresh pasta kits, some fresh veg baskets, fresh foccacia, tirimisu and @halecoffee coffee to go! Come stop by from 11am until we sell out. Plus, we'll be offering 10% off meal basket deliveries with any purchase on Saturday too. We'll have protocols in place for lines and contactless payment, so dont forget to bring your masks! #supportlocal #popupevent #popup #bottleshop #torontotakeout #torontolife

Wynona (not Wenona) in Leslieville has combined the two ideas somewhat to transform into a limited-time pop up bottle shop selling wine, pasta kits and groceries like coffee and veggies.