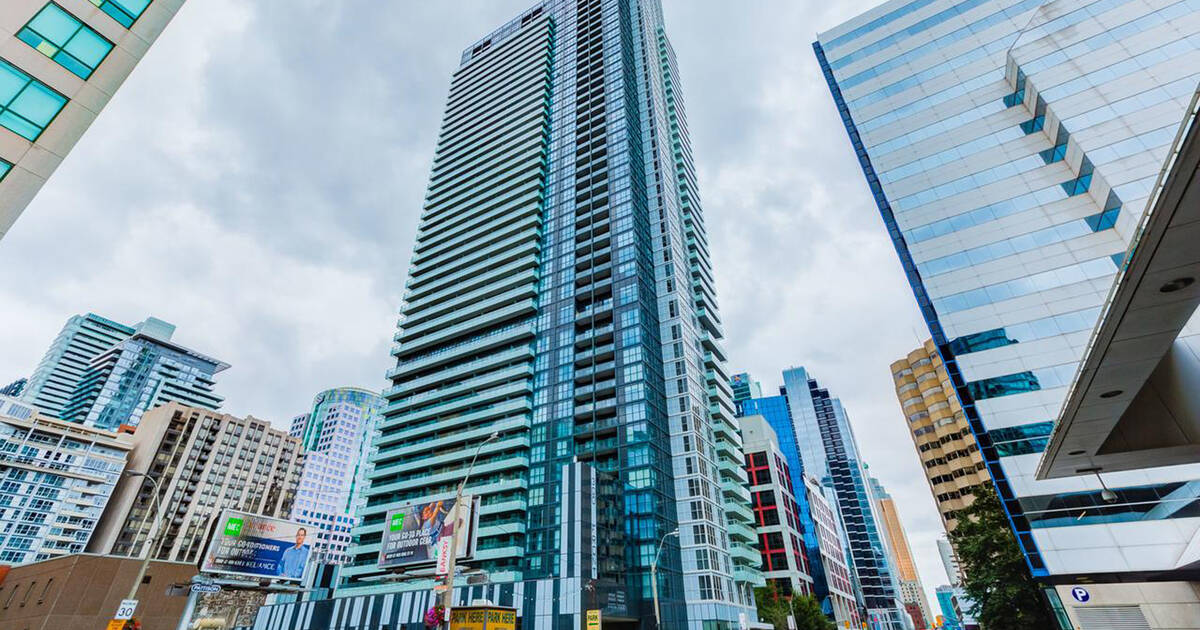 Residents at 300 Front Street West are frustrated that management hasn't put a stop to short-term rentals in the building.

"Our safety is genuinely at risk," one tenant, who wished to remain anonymous, told blogTO.

This isn't the first time 300 Front Street West has come under fire for continuing to allow short-term rentals during the pandemic. In April, CBC reported that condo owners were continuing to rent out the units despite government regulations.

In a letter shared with blogTO from the condo board, a ban on short-term rentals was issued on April 8 and the key exchange was stopped immediately. But these measures haven't been enough to fix the problem, according to one tenant.

"This building feels like a by-the-hour motel for hookers," they told blogTO, detailing numerous incidents that have escalated enough to warrant calls to the police.

For example, a month ago someone was stabbed in the building during an altercation. Police later arrested a 25-year-old man and charged him with aggravated assault.

But just a little over a month later another fight  broke out in the hallway that was so aggressive the police had to come break it up.

The incident reports the tenant has submitted to management describe people in the lobby with suitcases, multiple large parties and a revolving door of people being allowed into the building without keys or fobs.

"There have always been short-term rentals in the building. Property management usually helps facilitate the short-term rentals by holding keys with the concierge and booking through Del Suites. When COVID-19 became a bigger issue, management stopped accepting keys and urged owners to enter long-term leases," they said.

But a quick search through Del Suites site shows there are still plenty of condos available for short-term rentals.

"What’s happening now is owners are putting keys in lockboxes out front, literally hanging [the boxes] on a tree next to the Starbucks, and just having guests bypass the concierge completely," explained the tenant.

When blogTO reached out to the Toronto Standard Condominium​​​​​​ Corporation No. 2238 (TSCC2238),  who governs 300 Front Street West, they said that they were aware of the situation.

"The Corporation actively monitors its property to ensure that lockboxes are not posted in contravention of its governing documents. We are aware of two lockboxes which have been installed on City of Toronto property nearby to our building (but off of our property) and have contacted 311 to have them removed," they said in a statement.

And while there hasn't necessarily been more short-term tenants coming in the building than usual, the tenant blogTO spoke with did note that the type of people coming into the building is concerning.

"I witnessed a parade of escorts coming into the building while waiting for Uber Eats to show up," they said, adding that him and his girlfriend almost got into altercation with some of the short-term tenants in the elevator when they began making racist remarks.

"We’re not happy about the situation," they said.  "[Management] won’t interfere with people coming into the building with suitcases and the concierge told me that if someone has keys, they’re allowed in. I was shocked at how little effort they’re putting into this."

The tenants blogTO spoke to say they fear for their safety and feel powerless about the whole situation.

"Management [needs] to actually enforce the rules. Tracking the keys and fobs, imposing minimum lease-terms and actually speaking to the owners would go a long way," added the tenant.

TSCC2238 assured blogTO they're doing what they can to enforce the regulations and emergency orders.

"If the Corporation becomes aware of owners who are renting their unit in breach of the emergency orders, it has and will continue to take appropriate enforcement action to obtain compliance," they said.

They also noted that short-term rental accommodations were allowed if they're for people who need housing during the emergency period – like healthcare workers who need to self-isolate.

"Outside observers should not assume that all persons arriving at our property are doing so in violation of the emergency order," said TSCC2238.