Things are starting to get ugly in Hamilton 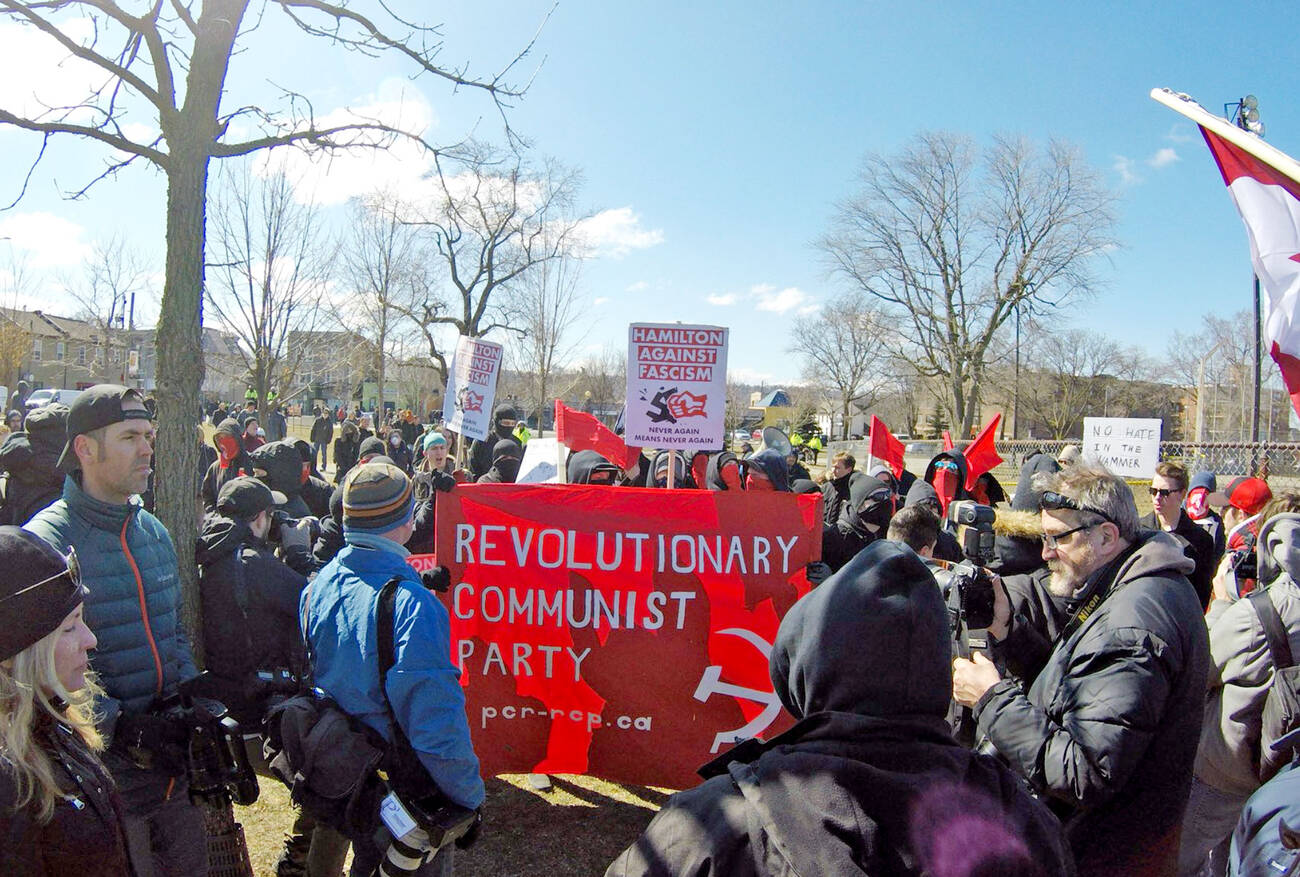 The polarizing, combative style of political discourse that's been sweeping the U.S. in recent years (you know, antifa vs. the alt-right and such) is creeping into Canada more and more, it seems.

A dual protest held just outside the GTA yesterday, on the recently-vandalized Locke Street in Hamilton, Ontario, illustrated this well.

About 150 loud, angry people from opposing groups gathered at Victoria Park on Sunday to "shout at each other," according to the Hamilton Spectator, though their reasons for doing so were a bit unclear.

The drama started with the creation of a Facebook event called Patriot Walk on Locke, which was said to have been organized by "far right wing groups" such as The Proud Boys, Soldiers of Odin and Ontario Northern Guard.

The Patriot Walk was scheduled, apparently, to protest the actions of 20-30 masked people who caused about $100,000 worth of damage to local businesses during a vandalism spree earlier this month.

tomorrow's fascist goon show in hamilton--where local proudboys are organizing w racist militias and neo-nazi wannabe biker goofs--hasnt even happened yet, and they are already planning the next one. these losers play hard at being ambitious. pic.twitter.com/lhapksT8Q2

A second group that calls itself "Hamilton Against Fascism" was quick to refute the initial event's purpose and book a demonstration of its own at the same time, in the same place.

"A collection of anti-immigrant and alt-right hate groups - Soldiers of Odin, the Proud Boys, and the III% 'Militia' among them - are planning a 'Patriot Walk on Locke'," reads that event's description.

"They're hoping to cast themselves as more than the racist, xenophobic goons they are by capitalizing on public sympathy for Locke Street. We won't let them!"

This "Locke Street Anti-Fascist Counter-Rally" was created for members of the anti-fascist group to "confront and denounce this cynical attempt at re-branding by 'western chauvinist', white supremacist, Islamophobic fascists."

The protests went off as planned, according to reporters, though a heavy police presence – including officers from Hamilton, Toronto and Waterloo – kept things well under control.

No injuries or arrests were reported, though some attendees were said to have clashed with or disrespected police.

Lots of peaceful people out today in Hamilton to let racists and fascists know that they are an insignificant and outnumbered.

The Hamilton Against Fascism group considered the event a victory for their side on account of how unsuccessful the Patriot Walk was.

A failure for what they called the "sad nazis" was a victory for them.

The ones "celebrating" their failed march by gathering around the swastika in the ground. pic.twitter.com/ys2wY3ZFlP

"Faced by a large and militant opposition consisting of Hamilton Against Fascism and our community allies... the fascists were wildly outnumbered," read a post published to the HAF Facebook group following the rally.

"Today was a resounding defeat for the far-right in Hamilton, and a huge victory for anti-fascist forces."

by Lauren O'Neil via blogTO
Posted by Arun Augustin at 9:38 AM