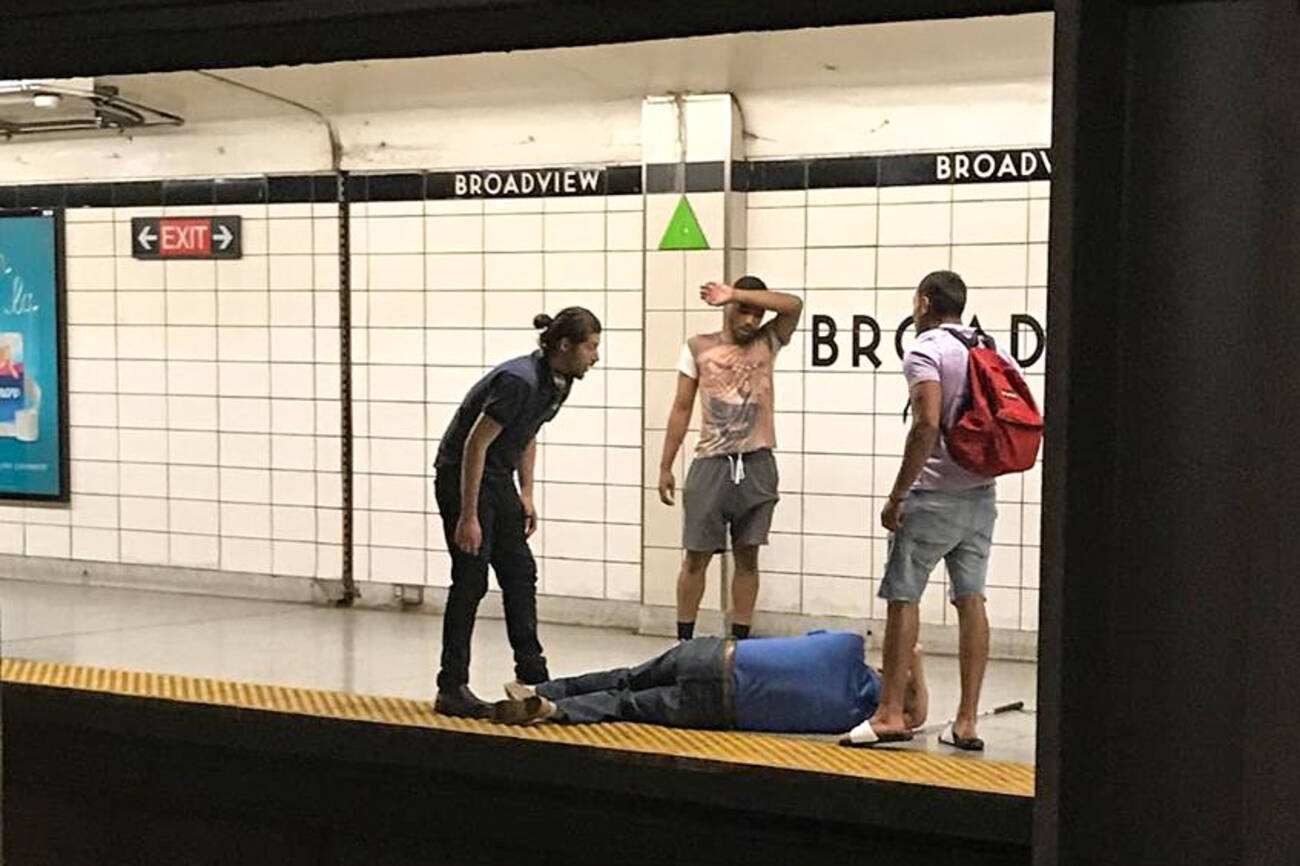 Not every shocking incident involving Toronto's transit system is a bad one — though, if not for a few brave travellers, this definitely could have been.

Three men are being hailed as heroes today after rescuing a passenger who'd fallen onto the tracks at Broadview Station Thursday afternoon.

In a a now-viral Facebook post, witness Julie Caniglia explains that she heard a faint voice calling out "help, help me please" upon arriving at Broadview Station.

Upon looking out from the platform, she and another passenger saw a man lying on the tracks with a walking cane. The man was blind, according to Caniglia, and had been injured in his fall from the platform.

"Without hesitation the man you see in this picture, in the animal shirt, jumped into the tracks to pull him out," she wrote on Facebook with a photo showing the injured man surrounded by three others.

"Thankfully, two other men showed up to help as well and this story has a happy ending," she continued. "Please pass this photo around, these men need to be recognized as good Samaritans. If they hadn't reacted so quickly, the outcome would have been horrific."

The man who'd fallen was rushed to hospital with minor injuries, according to TTC officials, but those who had saved him were gone by the time the agency's chief superintendent arrived at the scene — just like actual superheroes.

The TTC says that, at the time of the incident, another customer on the platform was quick to push the blue button that cuts off power to the deadly third rail, which could electrocute anyone who touches it.

Still, the unknown man in the animal print shirt risked his life to save another by jumping onto the tracks of an active subway line.

Nearly 3,500 have now commented on Caniglia's post in less than 24 hours, many to praise the rescuers and ask that they come forward for recognition.

This has not yet happened, a huge fan base is already waiting if and when they reveal themselves publicly.

Either way, the story is cheering a lot of people up during an otherwise trying time for Toronto.

"Just when you thought the world was a bad place, hope returns," commented one person on Facebook. "Thank you."

"As a subway operator on Line One, I know from personal experience how fast a situation like this can deteriorate," wrote another. "I know too the dangers these guys were exposing themselves to by helping this man. A brave and kind act."

by Lauren O'Neil via blogTO
Posted by Arun Augustin at 11:15 AM