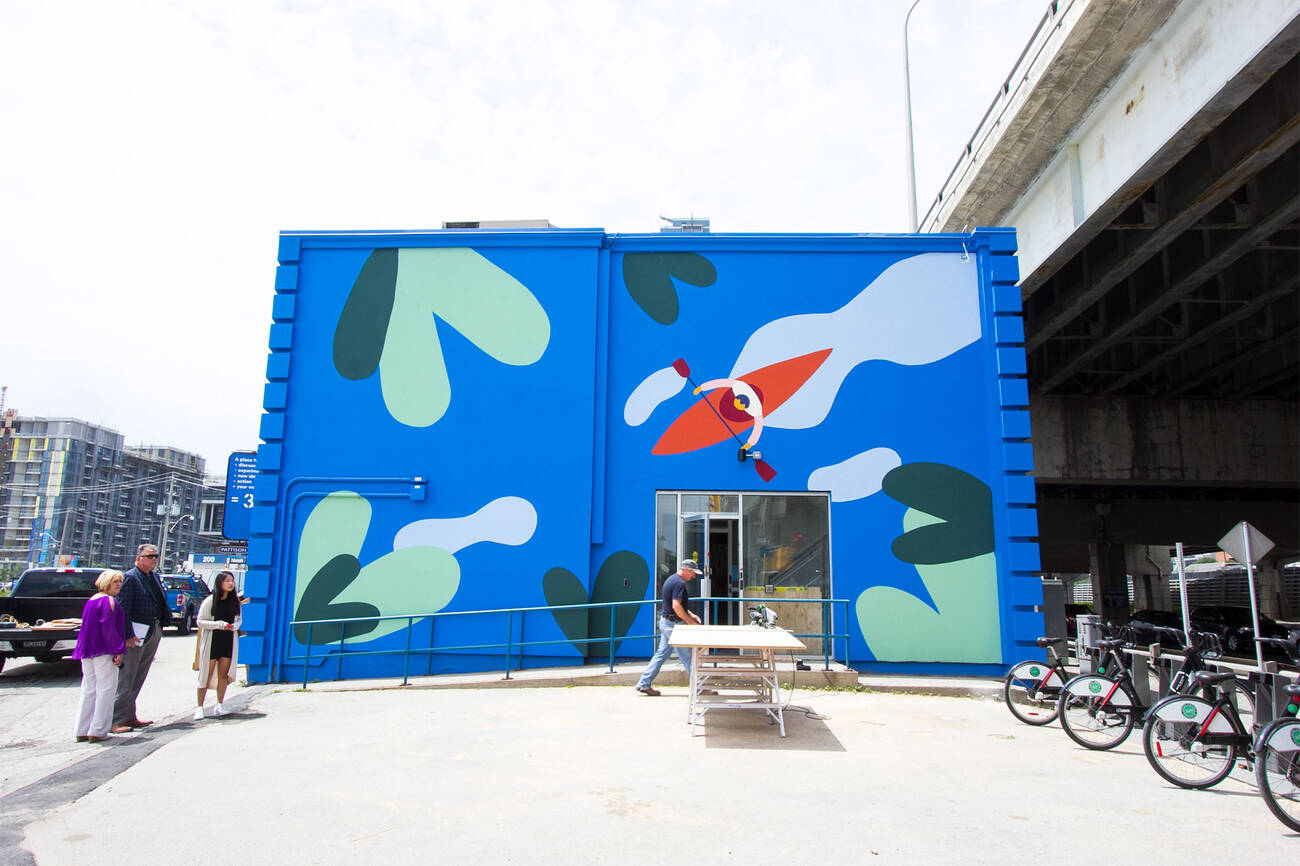 Though the details of Toronto's neighbourhood of the future have yet to be fully hashed out, it looks like Sidewalk Labs – the company responsible for Quayside – is moving ahead at full-speed.

At the end of the month, the Alphabet-owned organization will be opening its Toronto headquarters to the public following a weekend preview earlier this month. 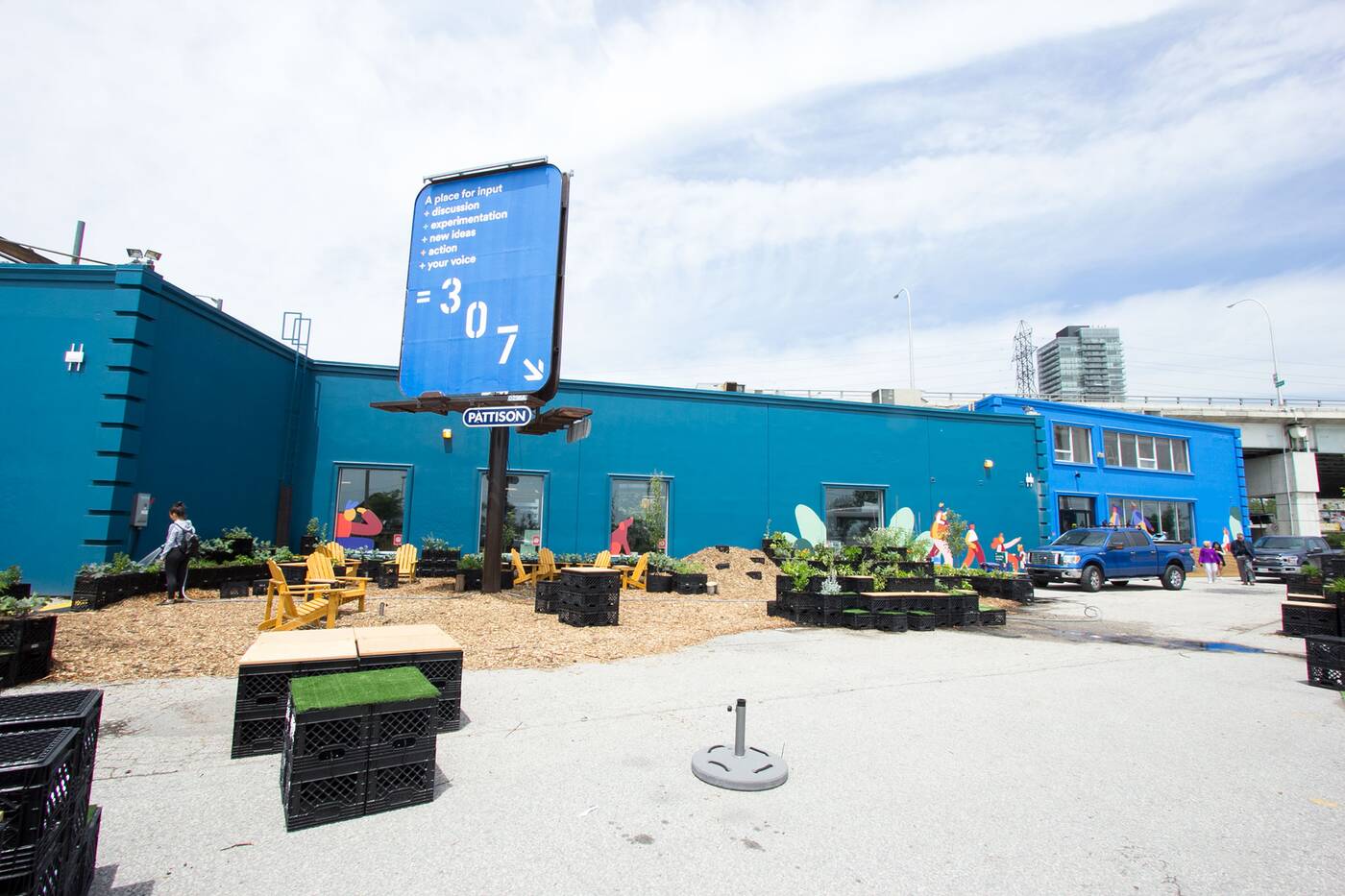 The office and community space – referred to as 307 after its address at 307 Lake Shore Boulevard East – will be open every weekend to the public starting June 30 between noon and 6 p.m., with future workshops and talks planned for the communal downstairs area of the building.

Also expect a monthly series called Open Sidewalks which will include things like performances, workshops and more prototype tests. 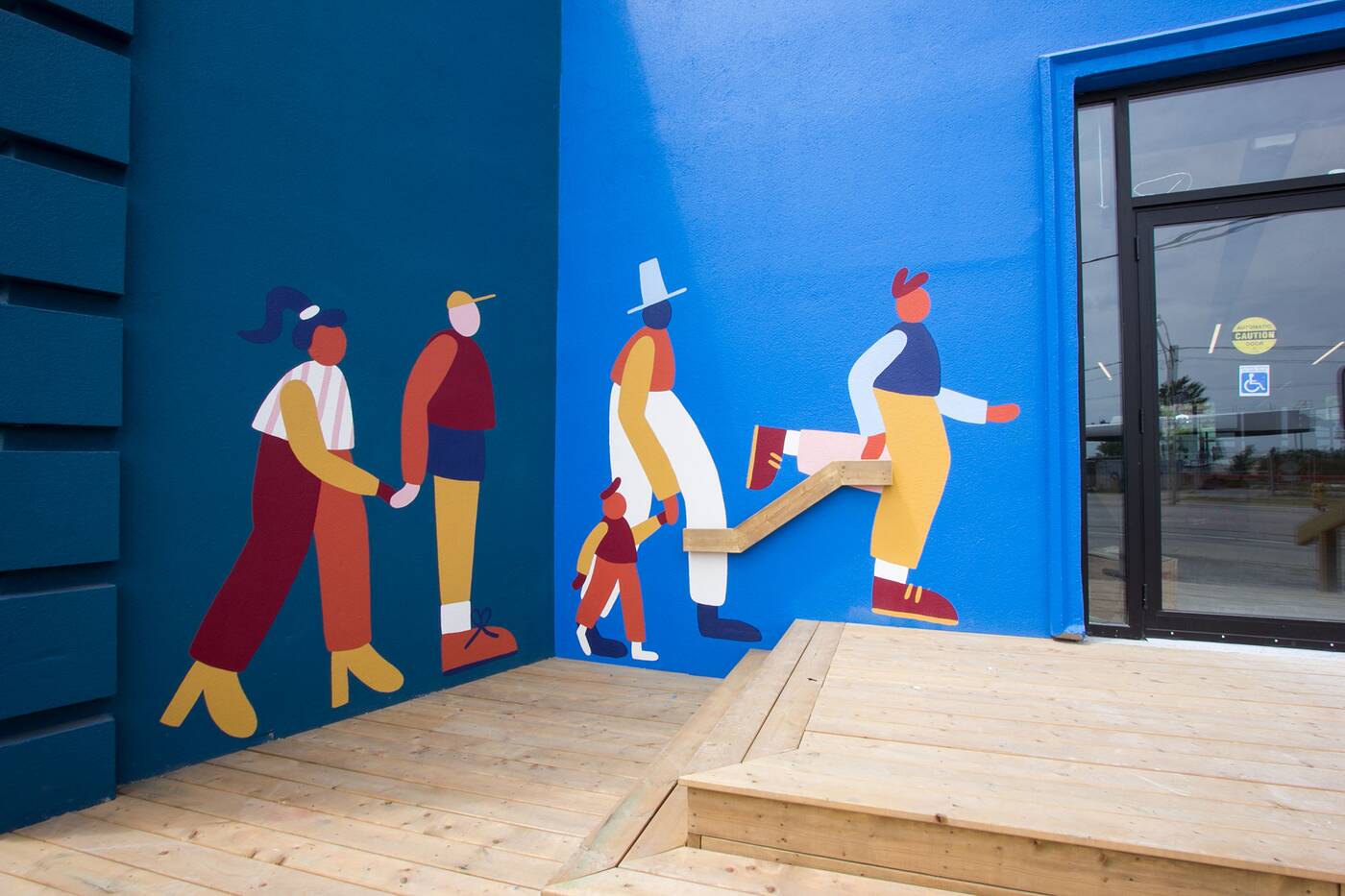 Coated in a bright blue facade with a colourful figures by Montreal-based artist Cecile Gariepy, a motif which runs through the office space, 307 is a sight for sore eyes when emerging from the dusty chaos of Queens Quay East. 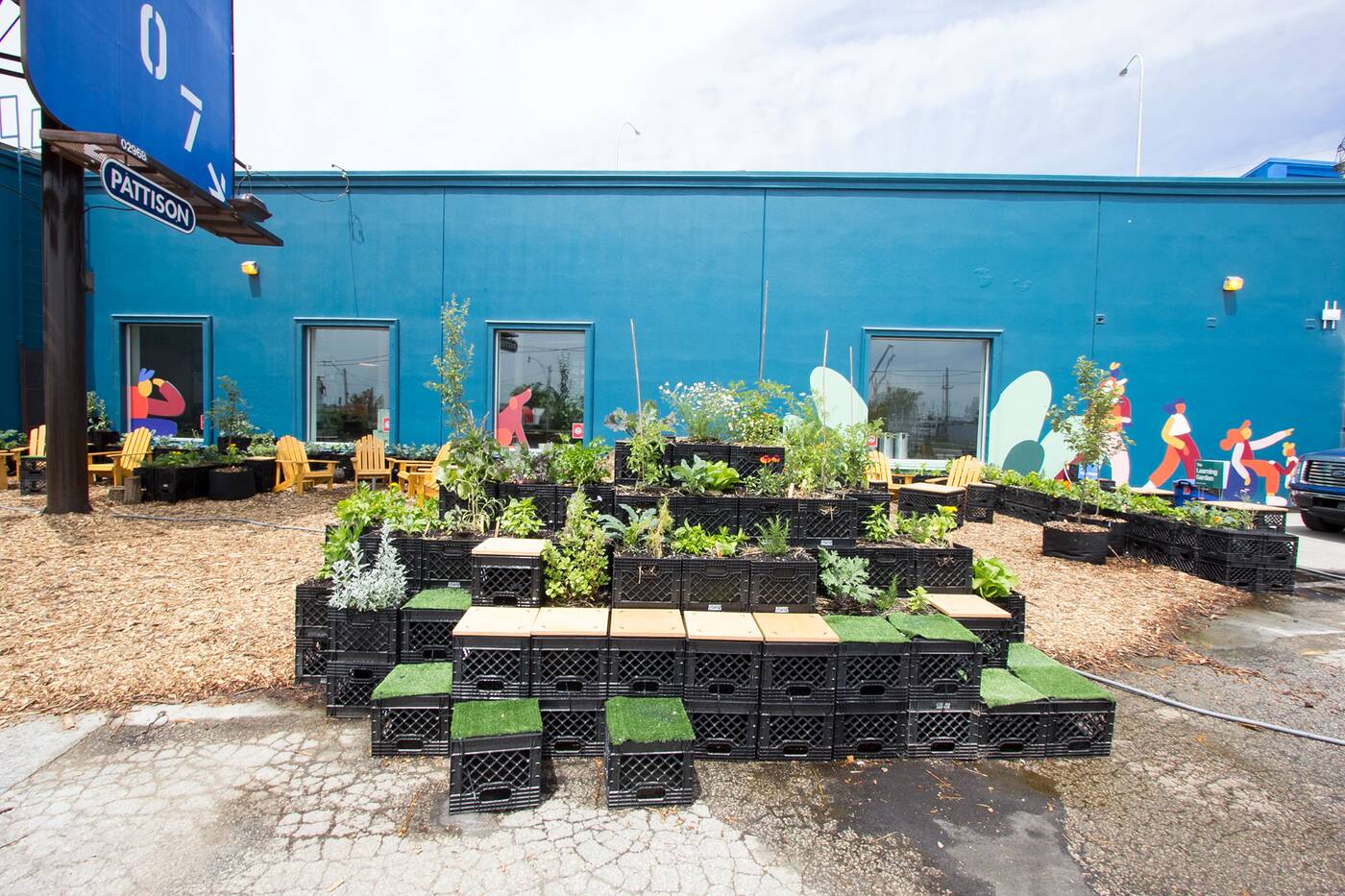 Designed by Lebel & Bouliane, it features a community garden of greens like mint, kale, and chamomile using milk crates as planters. Also called The Learning Garden, the modern garden concept was developed in partnership with the urban agriculture company Bowery. 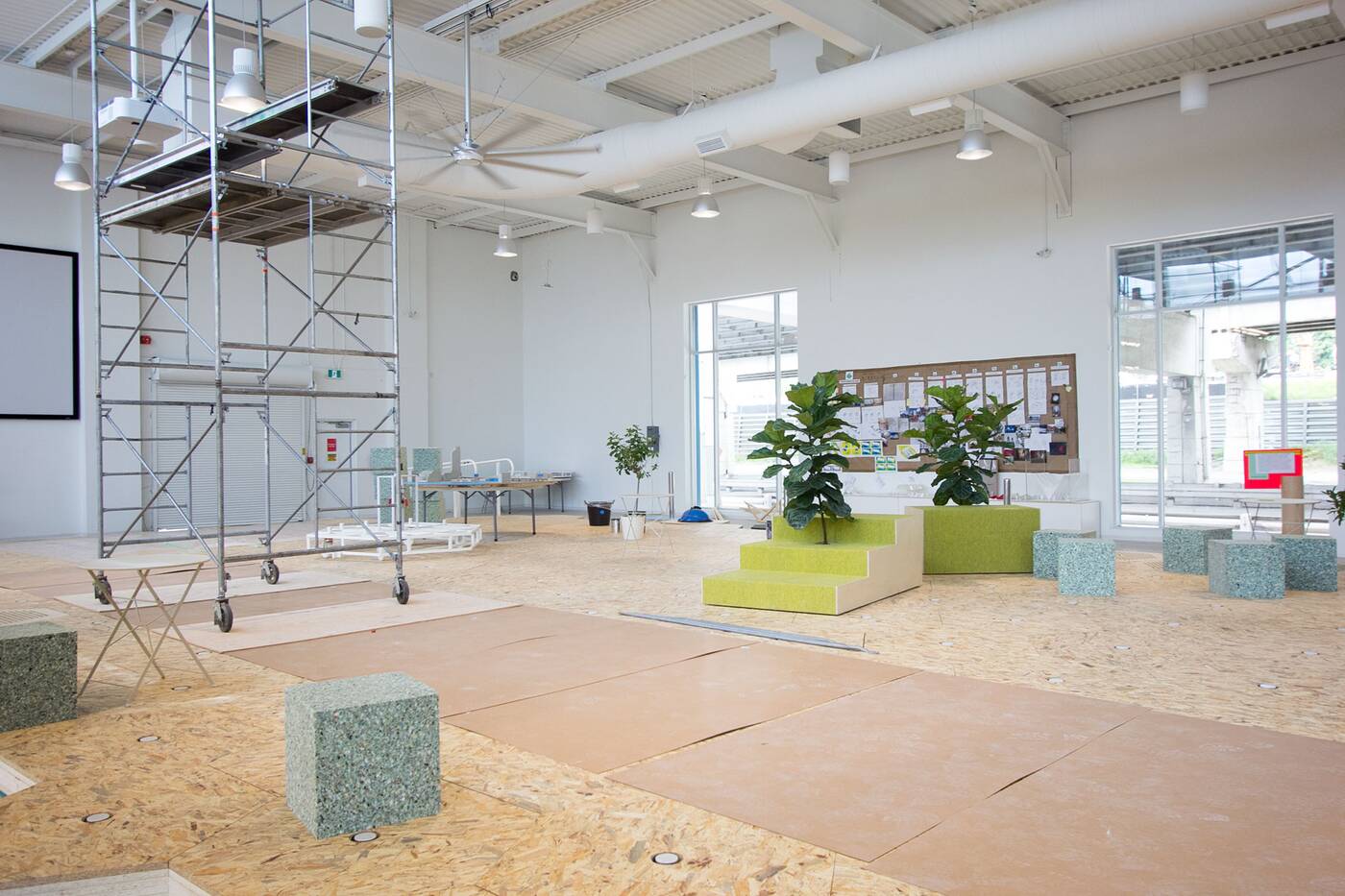 Once a fish processing plant, the sprawling headquarters benefit from plenty of natural light and high ceilings – exactly what you'd expect a Googe-affiliated space to look like.

Employees of Sidewalk Labs will have their offices on the second floor of the building, while the first floor reserves some space for meeting areas and a reception. The main attraction of 307 however is its interactive space, where all the demonstrations will take place.

The real goal of the space is prototyping: new inventions and ideas for Quayside will eventually be tested out at 307 to gauge reactions from the public. A 'feedback wall' full of sticky notes will let the Sidewalk Labs team know how users felt about the experience. 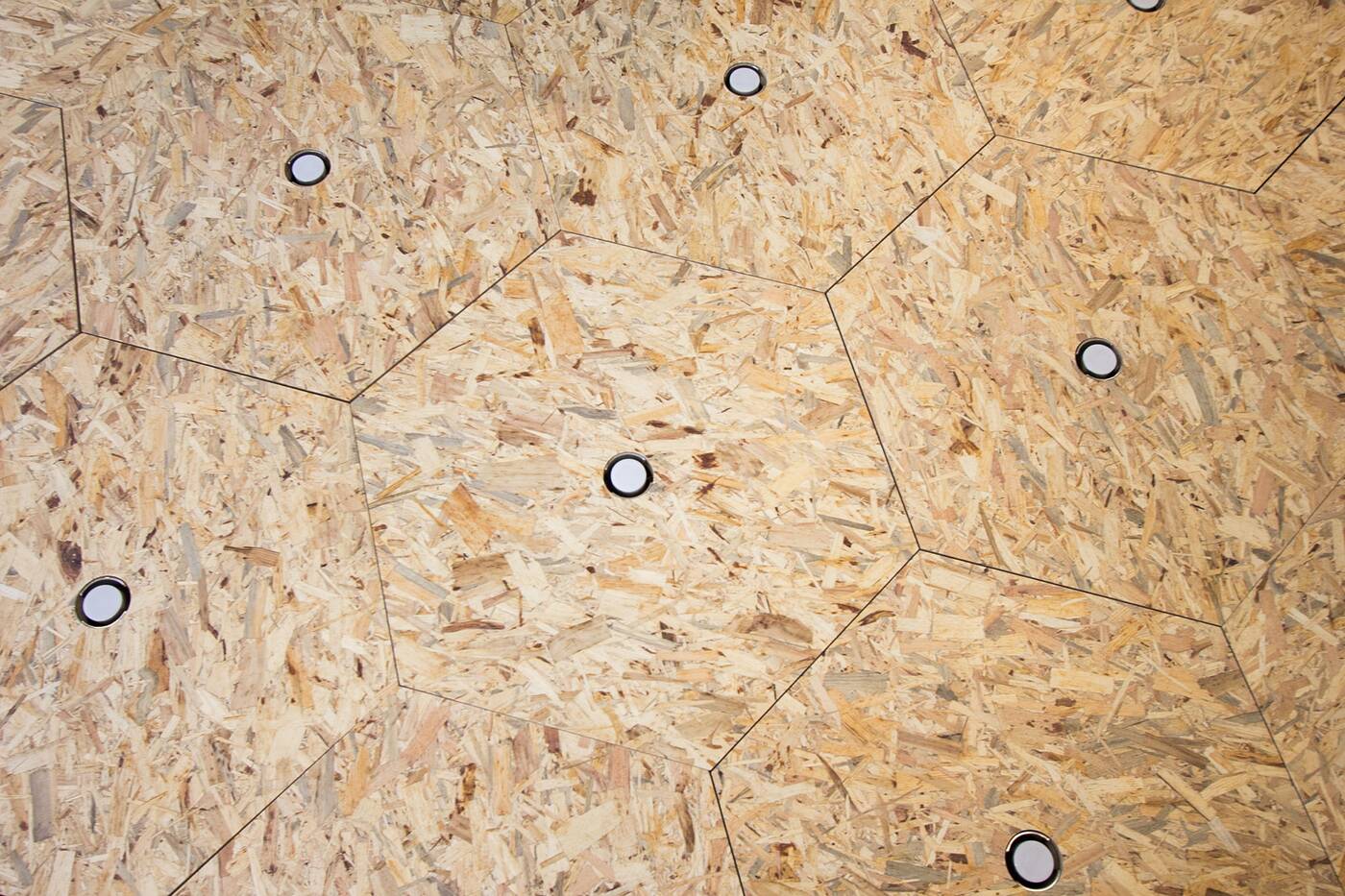 One prototype on display right now are designs for Quayside's potential 'dynamic streets'. This hexagonal flooring is a wooden version of Sidewalk Labs' future modular pavement with lights which will eventually be heated and programmed to control self-driving cars. 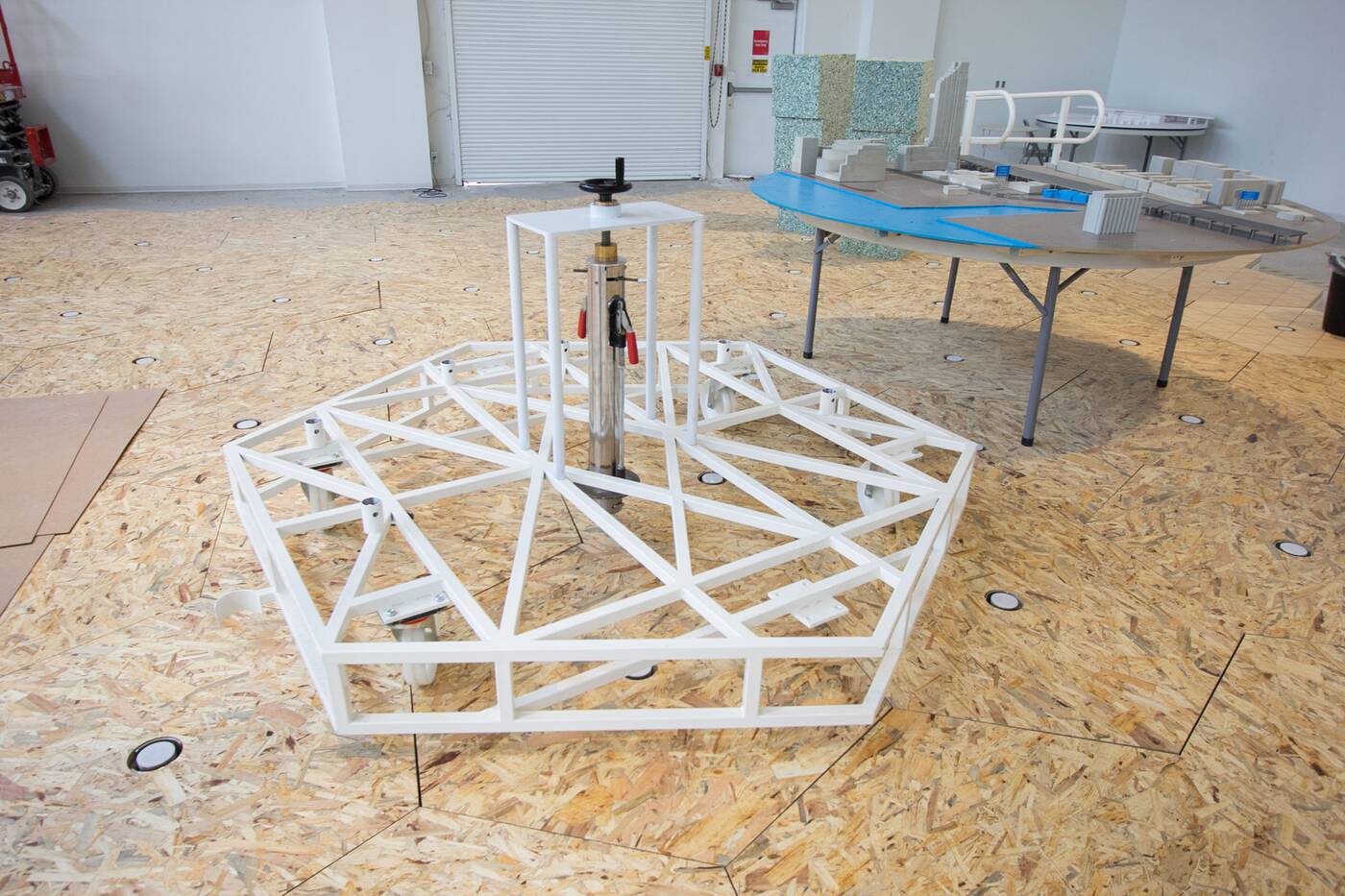 It's easy to imagine a whole city street comprised of modular pavement, and even cooler to see the machine – hypothetical as it may be – that will be eventually able to remove each individual hexagon with ease.

Overhead, a 'The Big Ass Fan' cools the whole building down using digital electricity, which according to a sign, moves as much air as 36 regular ceiling fans while suing 75 per cent less energy. 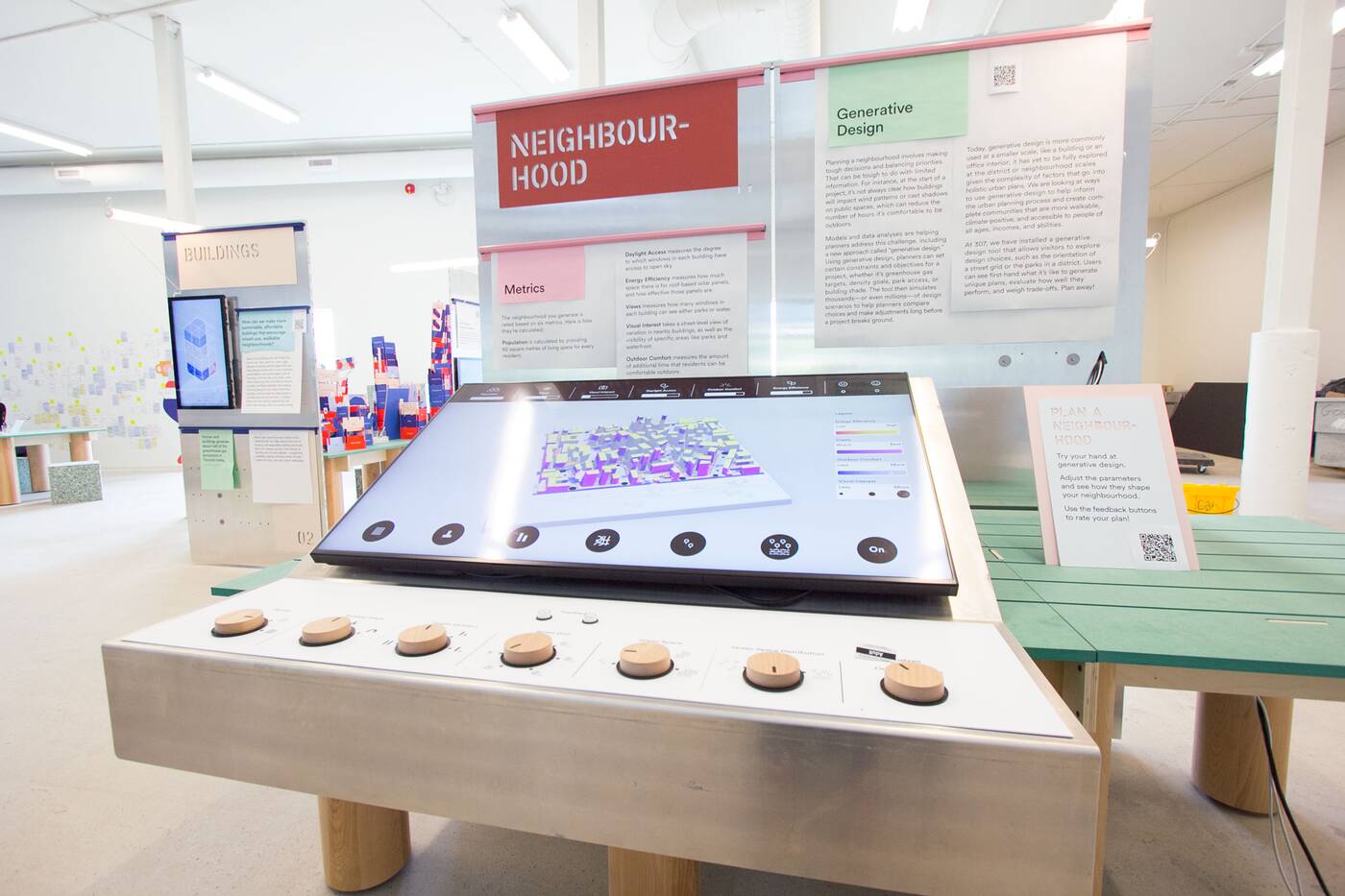 Other unique displays in the interactive area include a generative design game. Created in partnership with Montreal's Daily Tous Les Jours and KPFUI, this Sims-like device allows you to control neighbourhood aspects like 'green spaces' and 'density' using wooden knobs.

The result is a map that changes according to the variables you've assigned, with a goal of achieving the perfect living conditions. After playing around with the game you'll soon realize that no conditions are ever really perfect, just ideal – well played, Alphabet. 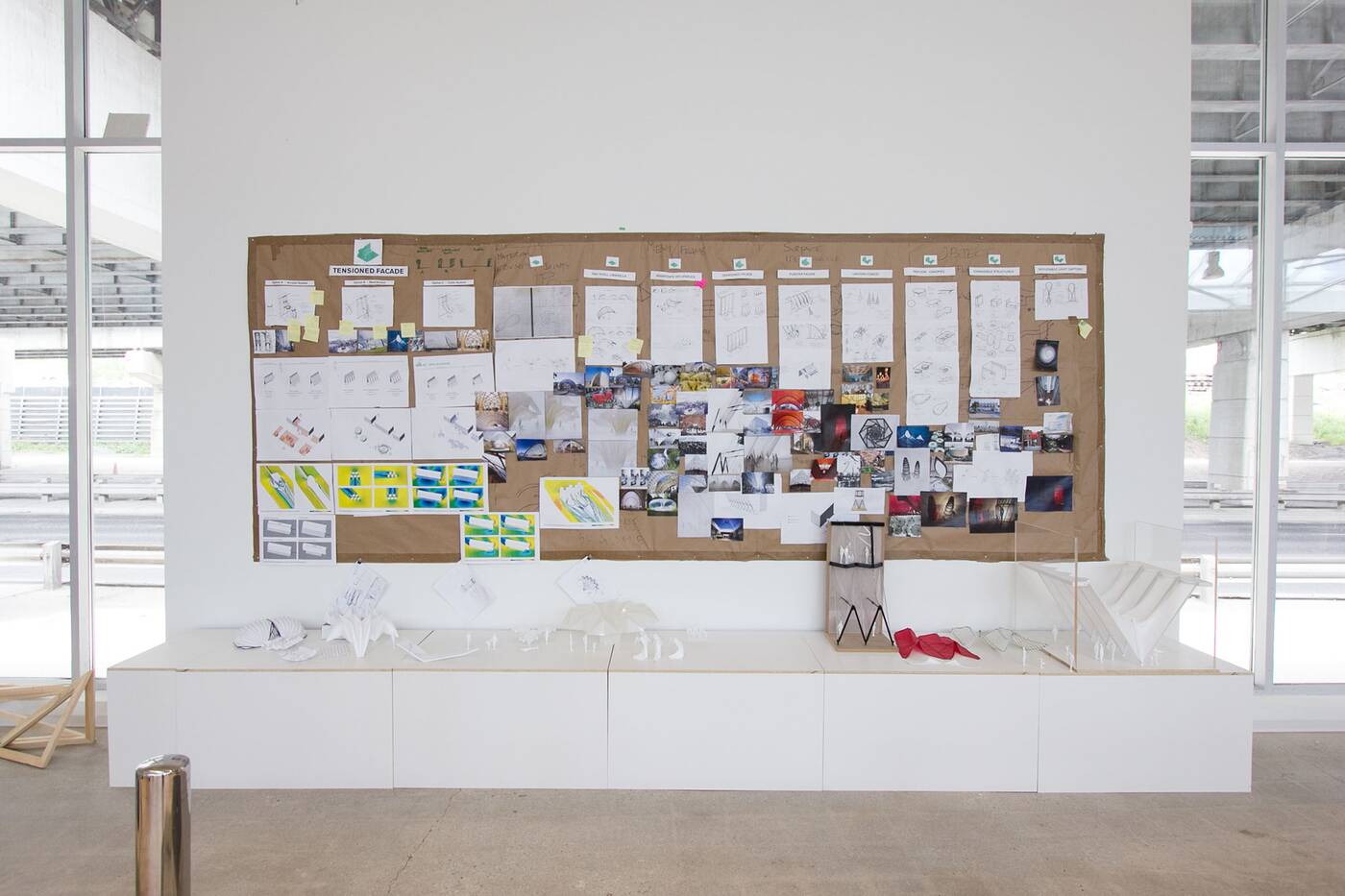 A board on the wall features prototype designs for optimizing outdoor spaces in the face of Canada's harsh weather. With some mockups by Toronto design firm Partisans and engineering team RWDI, one drawing includes the endearing idea of designing rain jackets for buildings. 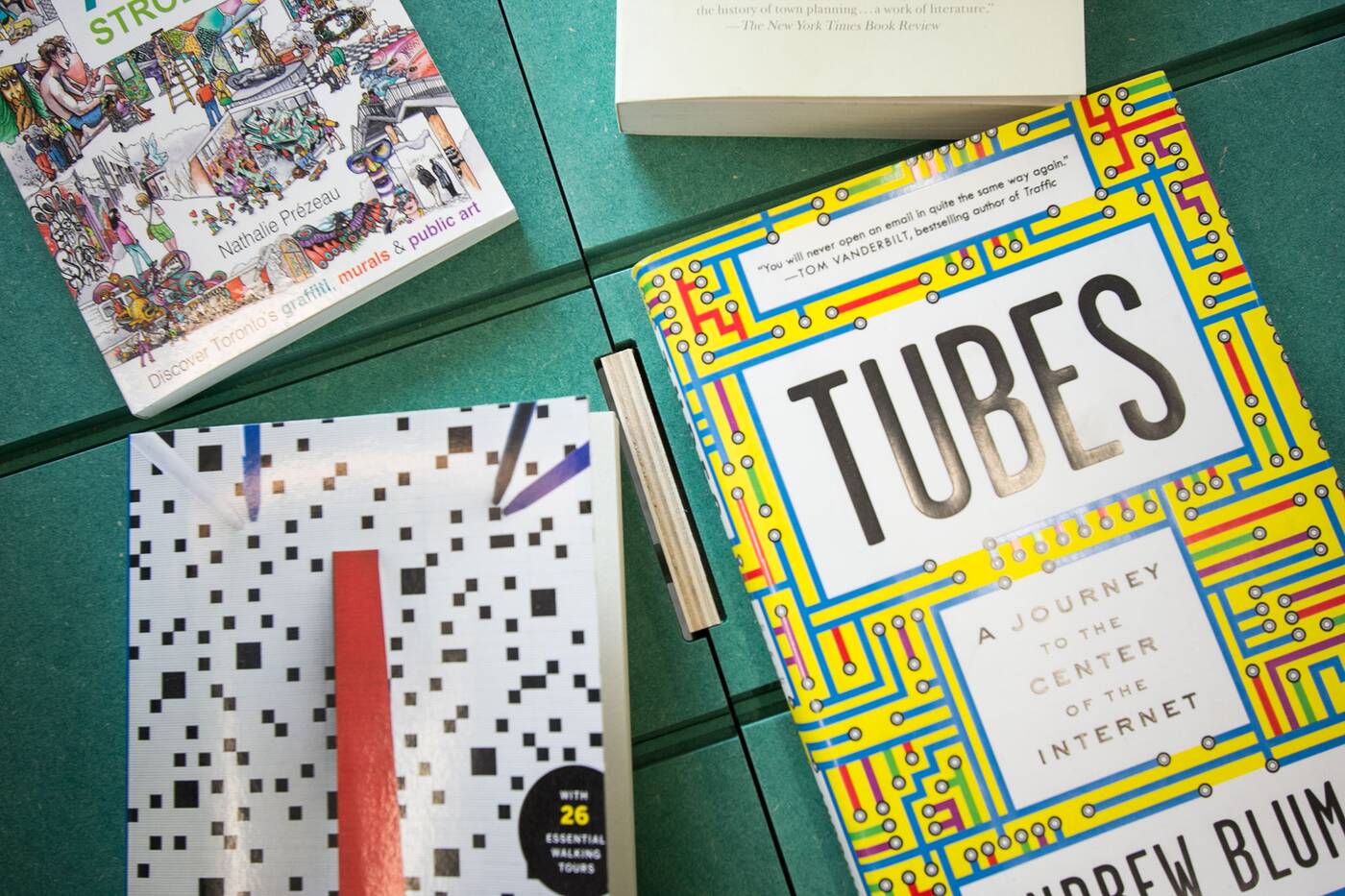 Alongside kids' arts and crafts tables revolving around community and home, the Sidewalks Labs library (a table covered in books) provides reads about city infrastructure, design, and sustainability. 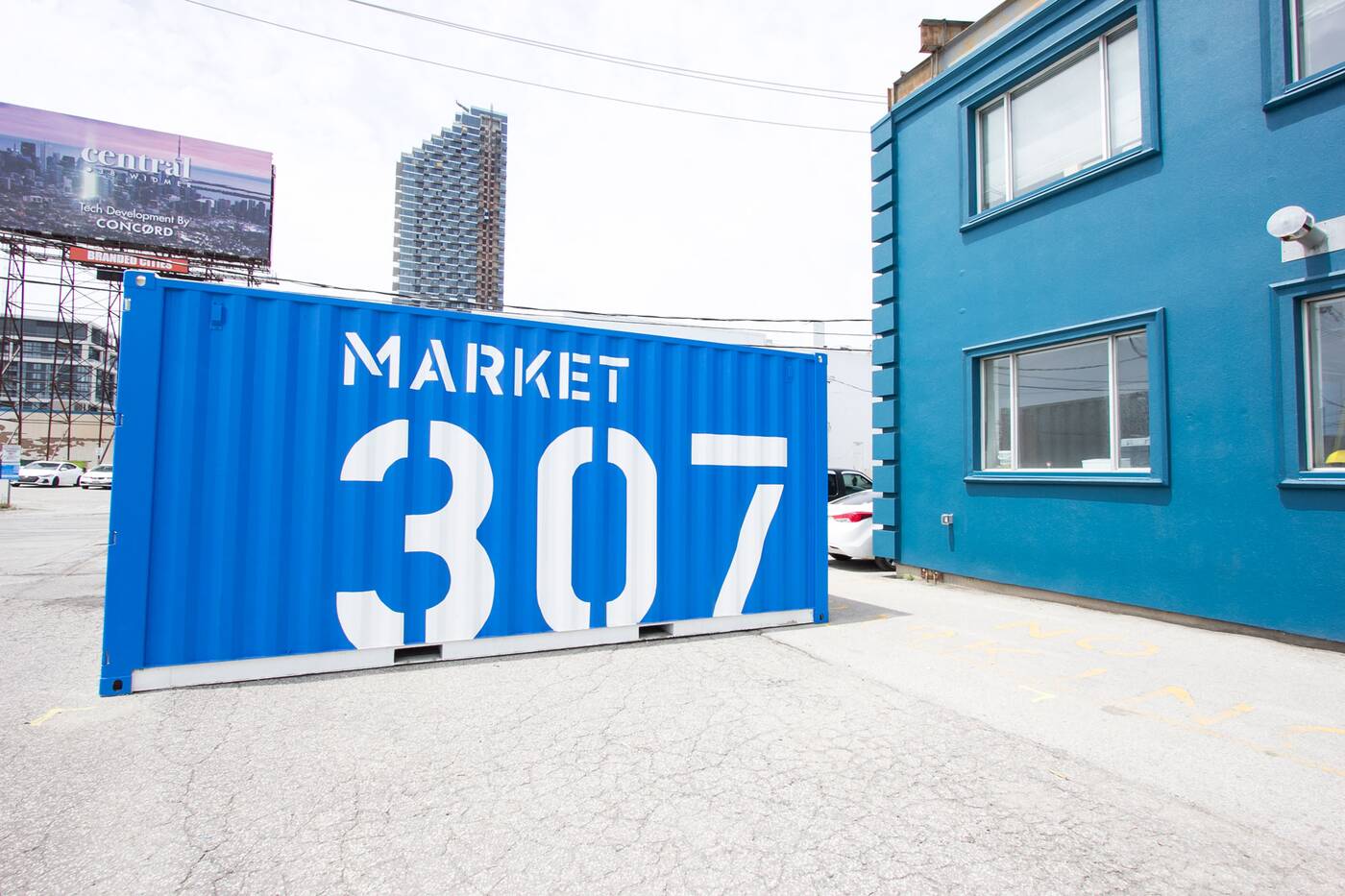 If you have concerns for the Sidewalk Labs team regarding Toronto's pending smart city – there are plenty questions to be asked about data collection – these bright blue testing grounds are likely the right place to have them answered. 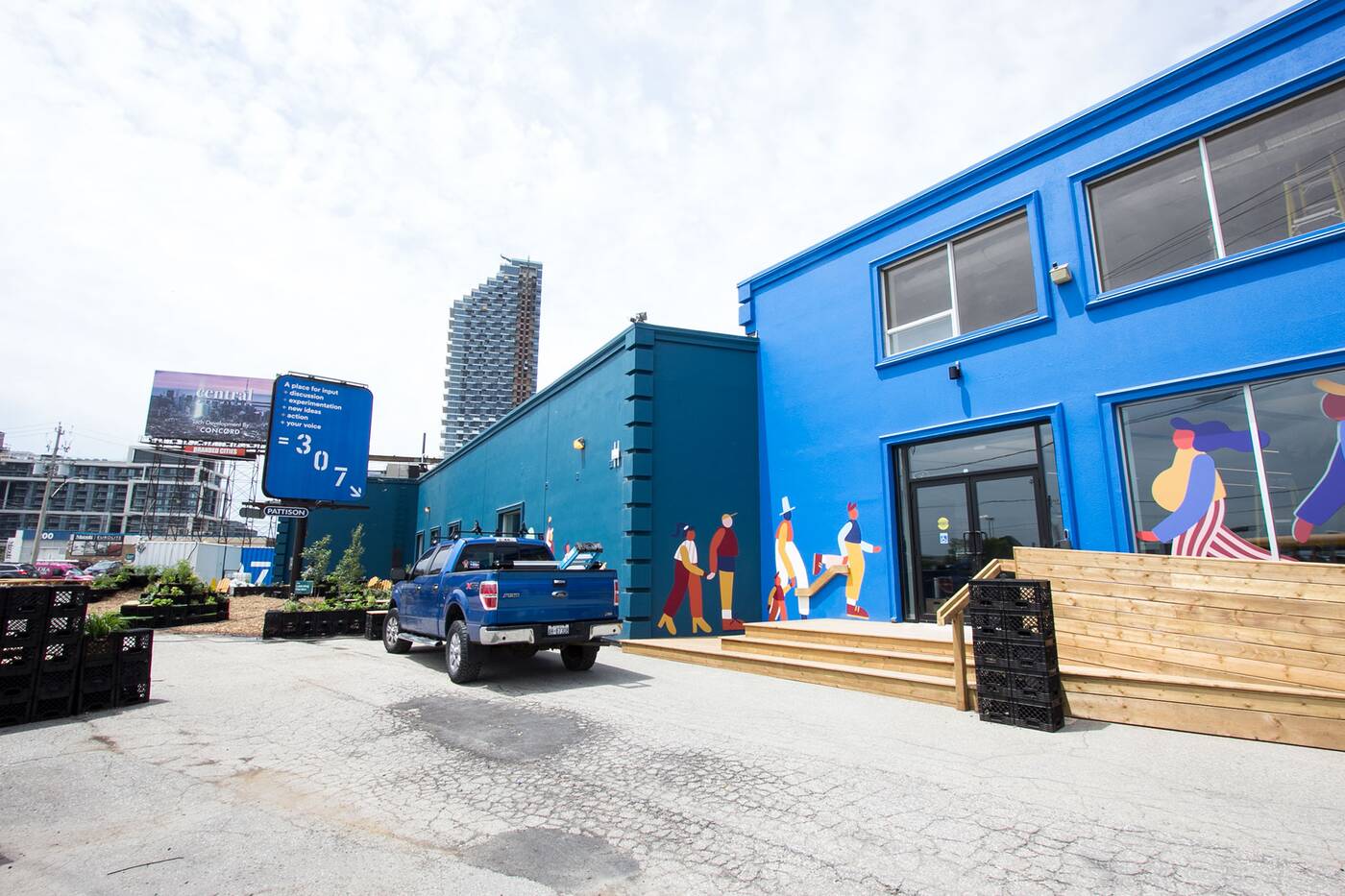