The top 30 Indian restaurants in Toronto by neighbourhood 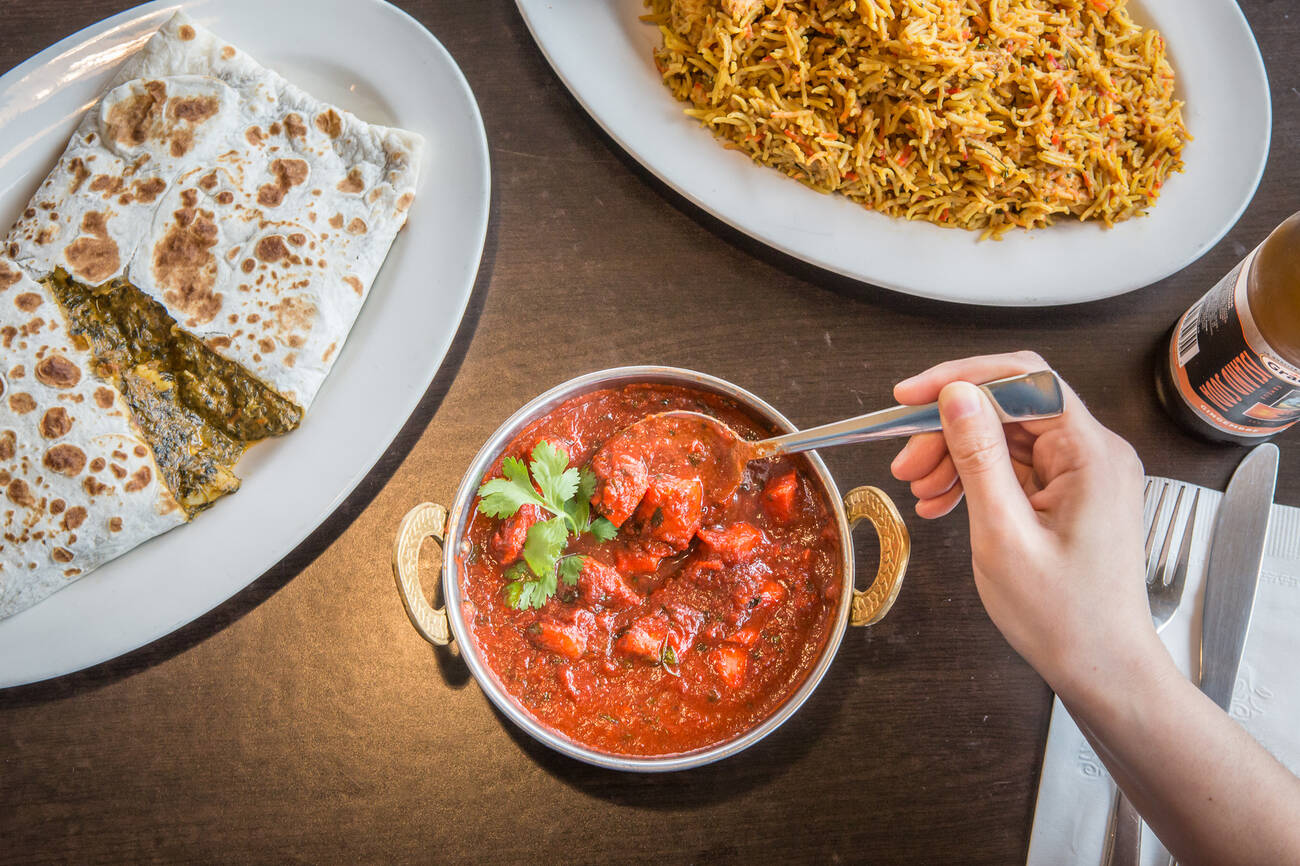 Indian restaurants in Toronto have competition by the hundreds, but you can almost always depend on these spots to do samosas, chana, and masala right.

Here are my picks for the top Indian restaurants by neighbourhood in Toronto.

Serving up the best of its namesake, Roti Cuisine of India has a big selection of roti and a variety of curries, meats, and veggie options — all served in a super lowkey space on Dupont.

The white table cloths at The Copper Chimney will probably look a little saucy when you’ve finished your meal. A comfy hole-in-the-wall, this spot feels like a best kept secret with amazing sizzling plates and affordable prices.

Unique cocktails and trolley food delivery, street-style, are all part of the experience at Indian Street Food Co. Presentation here is half the fun, as are dishes like the kerala beef sandwich on a burger bun.

Yet another restaurant to close down briefly due to a fire, South India Dosa Mahal is up and running once more and continues to serve its purely veggie fare and massive dosas. 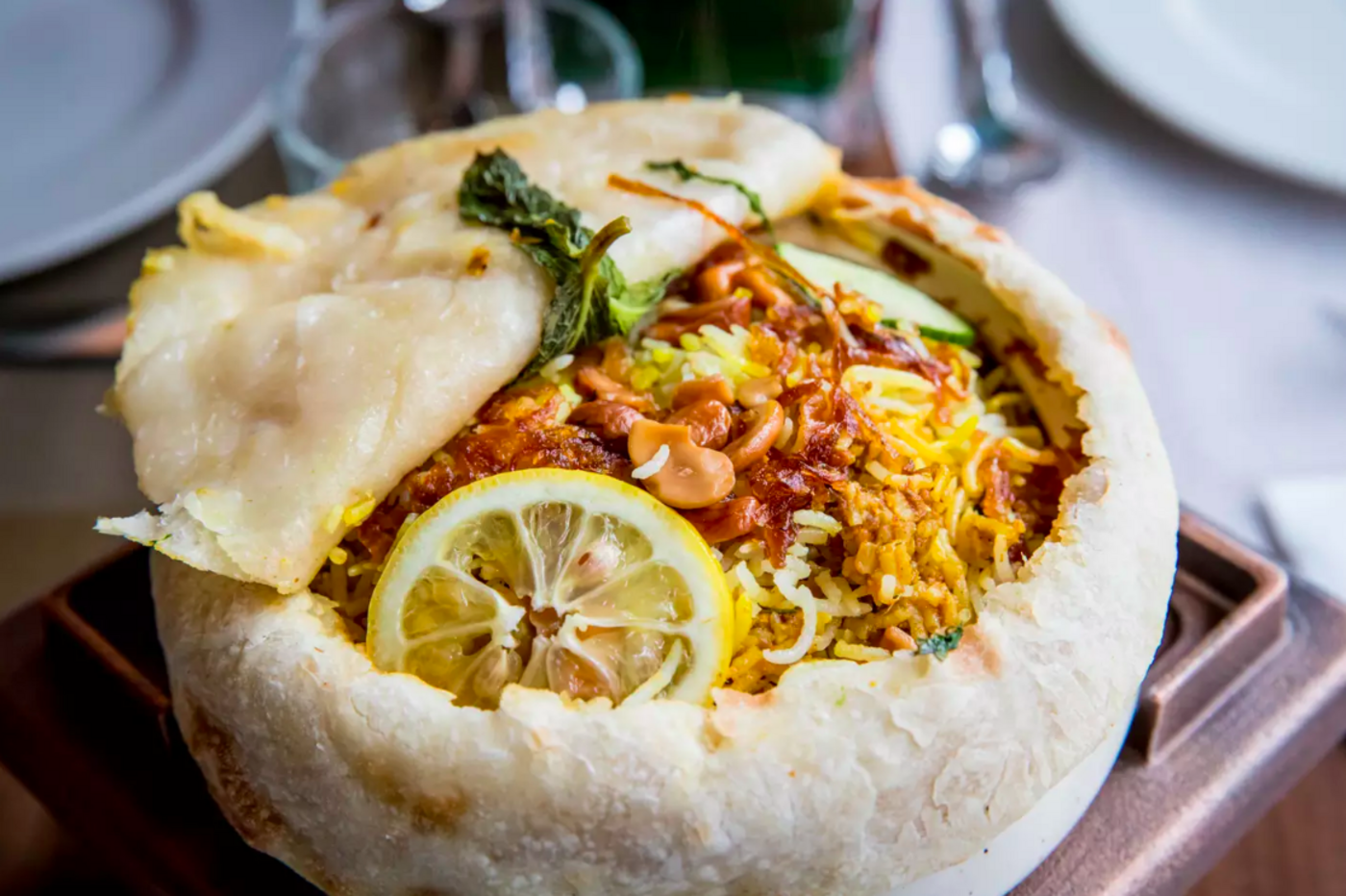 The chicken dum biryani at Khau Gully comes in a naan bowl. Photo by Jesse Milns.

North Indian dishes are the specialty at Butter Chicken Factory, a pretty white-bricked walled restaurant that serves its tasty naan in baskets with checkered paper.

Truly India is a family-run vegetarian restaurant that should not be slept on. This hot table on O’Connor Drive may look humble from the outside but is a serious contender with delicious naan and cheap veggie curries.

Empire Grill offers luxurious plates of Indian food in a fancier environment. Brought to us by the ex-chef at Kamasutra, this place is run by an Indian food veteran.

Transforming the former space of Indian favourite 259 Host, Aanch is an upscale endeavour with a modern menu of rosemary-spiced naans and a really delicious paneer tikka masala.

The very hip Tich Indian restaurant has much less of a fine-dining feel and more of  a casual Lakeshore eatery vibe. Grab a glass of Indian single-malt whisky and pair it with some pakoras and tandoori chicken with a side of delicious salad.

Indian Roti House may be a takeout spot first and foremost, but there are a few fold-out tables that will allow you to enjoy the unreal rotis and mango lassi here. 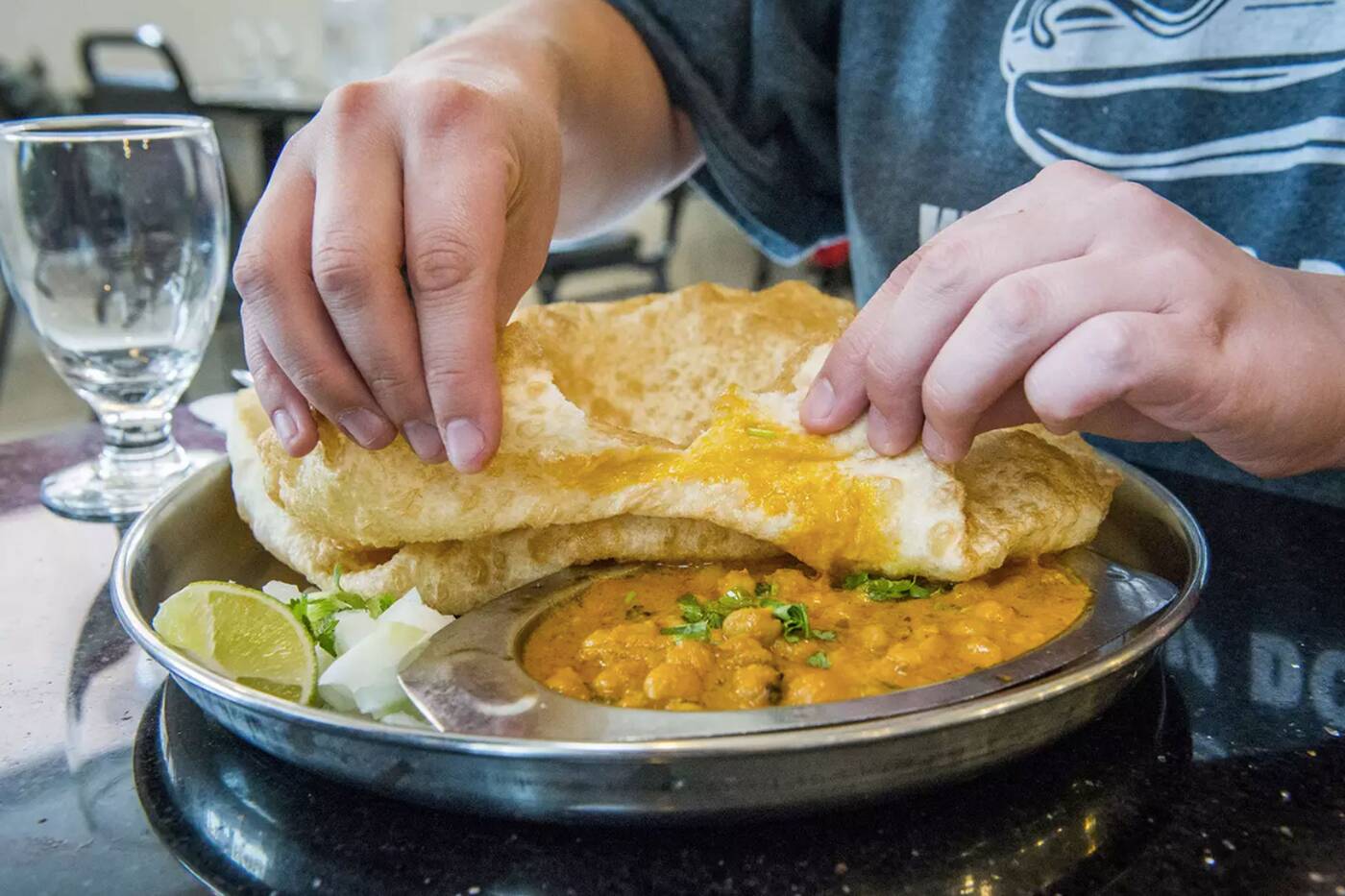 Everything is vegetarian and vegan at Udupi Palace in Little India. Photo by Hector Vasquez.

A go-to for tourists visiting the nearby St. Lawrence market, Bindia is comfortably reliable for freshly made North Indian dishes coming straight out of the clay oven.

The ultimate cure to office hanger, Aroma offers a popular lunchtime AYCE buffet — just make sure to come early since it gets wall-to-wall packed here. Also a go-to option for theatre-goers pre-TIFF.

What started off as a strip mall joint in Etobicoke, Maurya continues its legacy on Liberty Street with a minimal joint that makes delicious samosas and a phenomenal saag paneer curry roti.

Step downstairs in the basement that is Udupi Palace, a restaurant that completely makes up for its lack of ambiance with unreal vegetarian meals like chana bhatura and vegan dosas.

The all-day buffet located at the back of India’s Taste is fresh, offering North Indian options for lunch and dinner. Your meal comes with unlimited naan, desserts are tasty and prices are totally inexpensive.

Veggie Thali is one of Vic Park’s best kept secrets. Ditching the dairy, this basic spot serves completely vegan dishes on silver trays. Whether or not you decide to dine in at this minimal eatery is up to you. 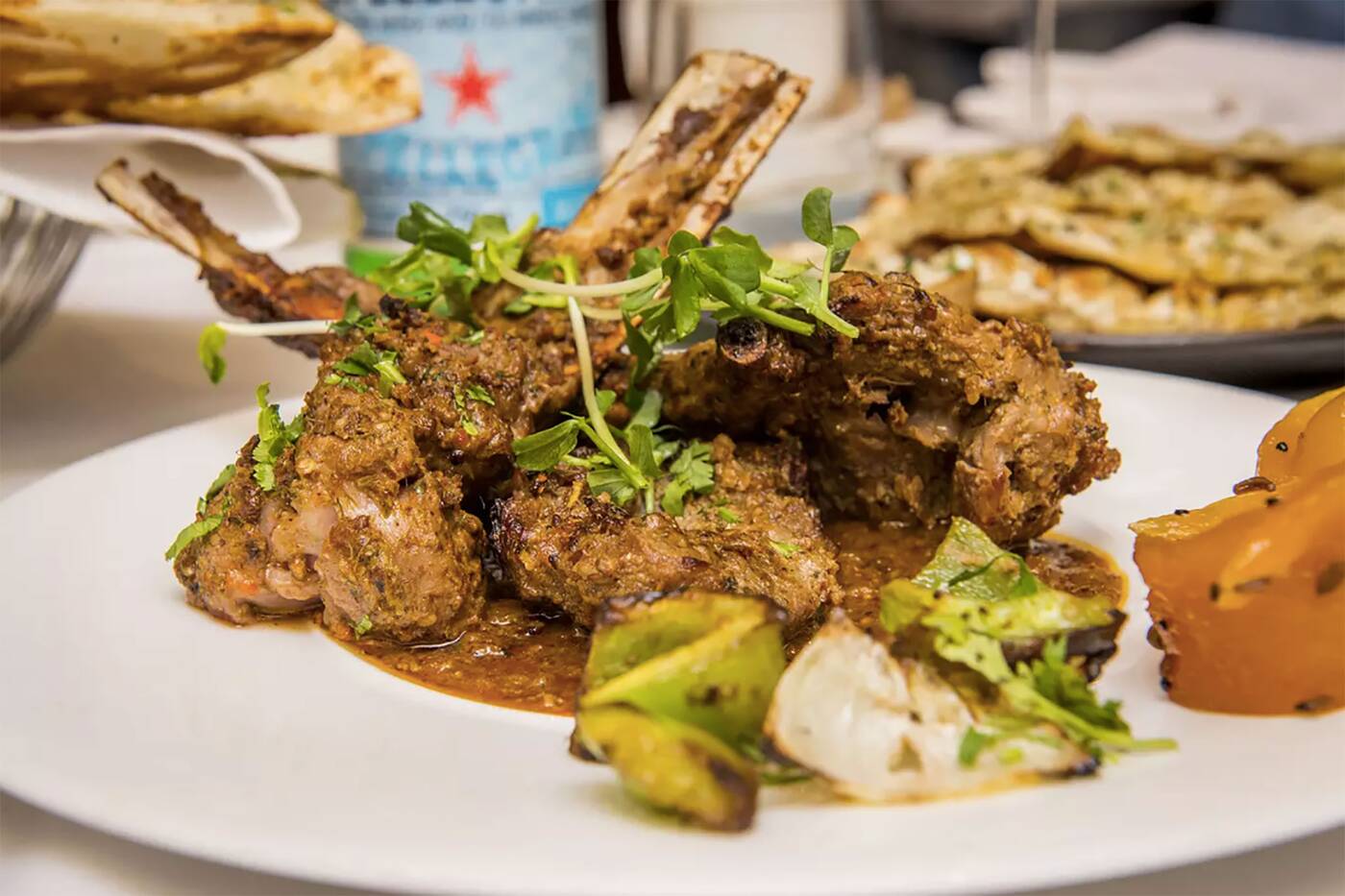 Despite its lacklustre appearance, the dosas at Glory of India are notoriously good, and their thali meals are always generous. The best part – it’s super cheap.

Siddhartha is tiny spot that serves best as a takeout joint. Right across from the Opera House, you’ll usually find people waiting for fresh-made naan wraps.

Whether you’re a first-timer or a longtime fan, it’ll never cease to amaze you how full you can get at Little India's lunchtime buffets, which are both delicious and affordable.

The best part about Bhoj Indian Cuisine is that you can choose your spice levels right off the bat, which is perfect for those who can't do spicy, and those who can't get enough.

Despite being a strip mall joint on Pharmacy, the interior of Lageez is surprisingly elegant, albeit a little narrow. You’ll find saffron rice with cinnamon, cardamom and clove, and butter chicken made with fresh tomatoes.

For those passionate about wine and Indian food, Pukka has a wine program curated by the sommelier at Scaramouche to pair with classy twists on Indian dishes. 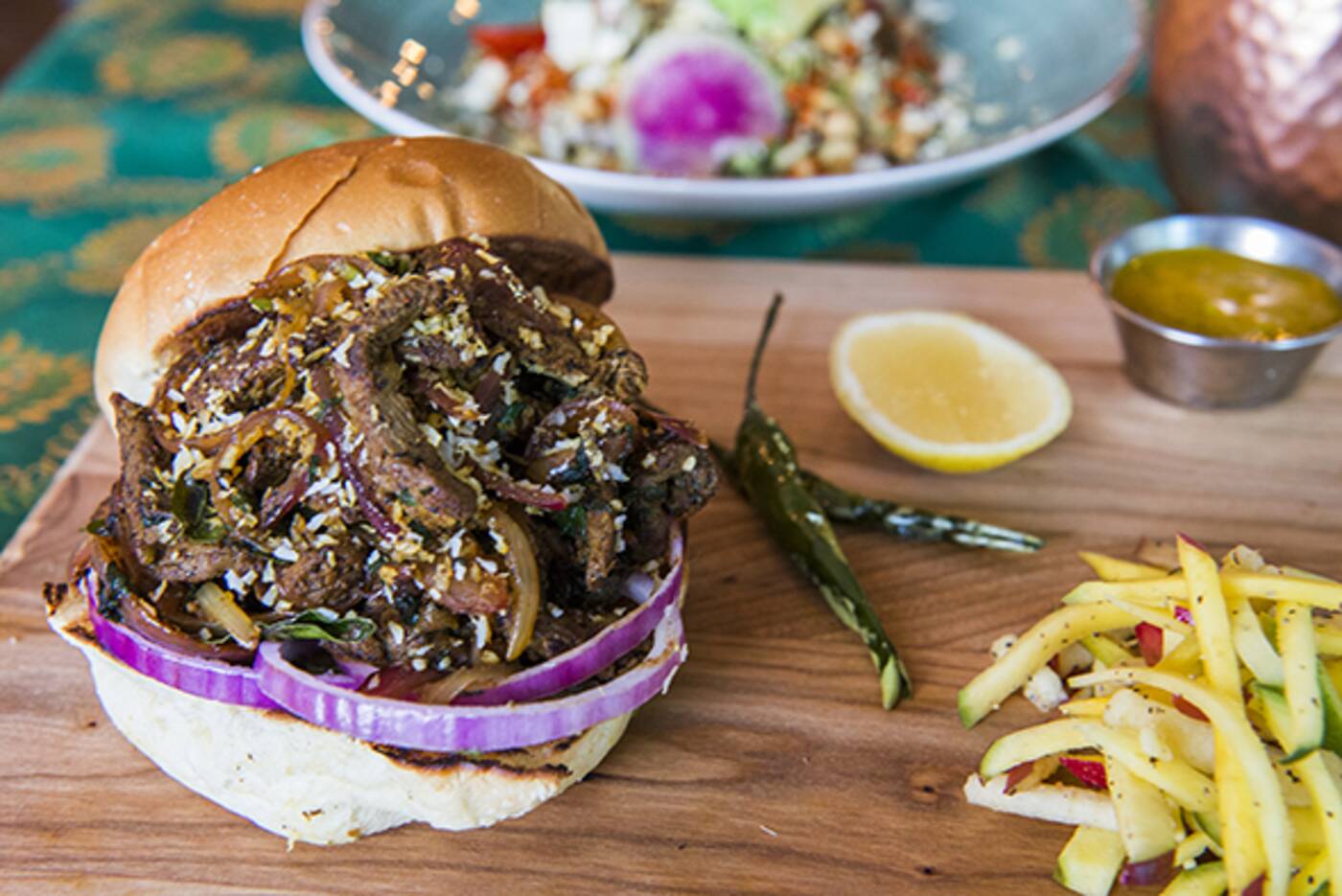 Modern twists on Indian food are on the menu at Indian Street Food Co. Photo by Hector Vasquez.

Colaba Junction is an energetic spot where you order at the lunch counter and have your food brought to you. Focusing on a particular area in Mumbai with multiple cultural influences, dishes here are definitely unique: case and point the paneer lasagna.

Hurry Curry's Mutual Street location is definitely more geared toward students than it's original spot off of Dufferin, with convenient curry bowls which are perfect to go, and also oddly mismatched offerings of tacorritos as well.

The upscale Khau Gully is probably best known for its chicken dum biryani, a glorous rice dish that comes encased in naan that will definitely satisfy your Indian fare cravings.

Chef of India is certain an uptown favourite that rarely disappoints. While not necessarily the best bang for your buck, it’s reliable and both the buffet and a la carte dishes are tasty.

You’ll love the vibrant interior of Bombay Street Food, a playful space that has a fun menu of street-inspired Indian eats. The pav buns are a huge standout, and the cardamom coffee is an amazing aromatic accompaniment.

Naturally, being in Yorkville, The Host is a fine dining restaurant serving cocktails and a famous tandoor menu of freshly-grilled eats from their clay oven.

by Tanya Mok via blogTO
Posted by Arun Augustin at 7:54 AM