10 schools in Toronto are now teaching students in tents 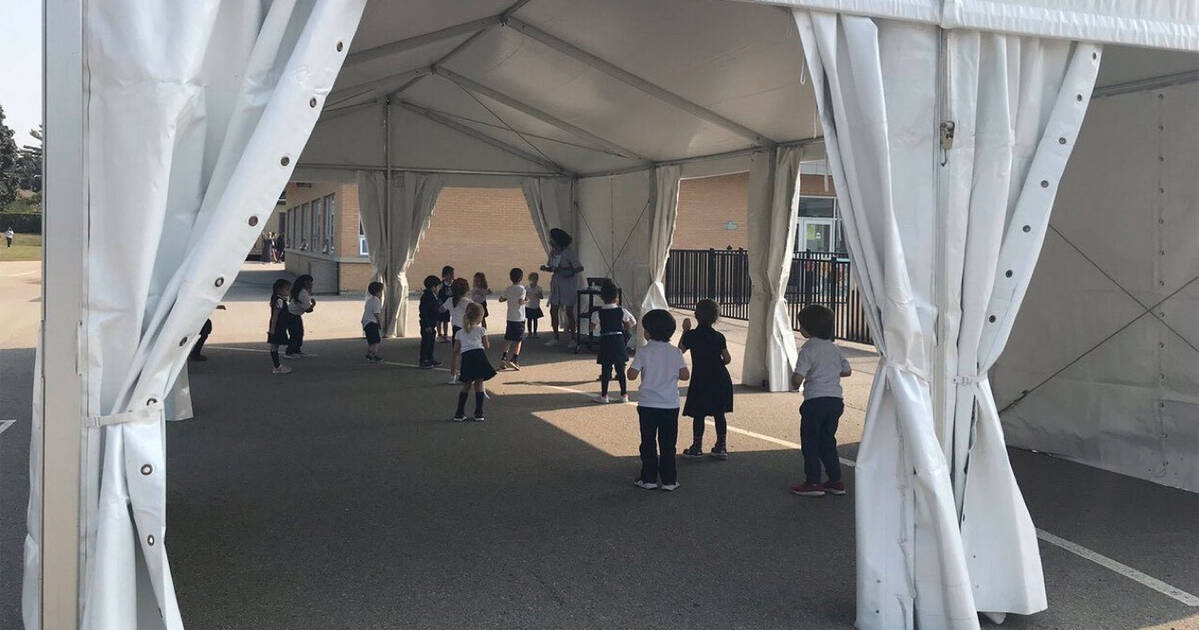 The Toronto Catholic District School Board (TCDSB) has launched a tent classroom pilot project in 10 of its schools across the city — and now they’re hoping to find heaters to keep them warm in the coming winter months.

The project is similar to the models Denmark and Norway have adopted for students, which is focused on outdoor learning and education that isn’t restricted to indoor classrooms.

“We had many meetings in July and August that went to 3:30 in the morning, and one of the motions that got passed was to try out some outdoor attendance because we all know the outside is a much safer place to be than indoors in this COVID-19 world that we find ourselves in,” said Norm Di Pasquale, TCDSB trustee for Ward 9.

The tents which cost $100,000 were funded by the federal contingency funding for local initiatives and priorities. They were set up between Sept. 24 and Sept. 29 and welcomed their first cohort of students on Wednesday.

St Eugene tent is up and classes have already been using the outdoor space to support safe learning. @Markus4Ward2 @TCDSB @TCDSBdirector pic.twitter.com/JF1boougPK

Di Pasquale said the school selection was focused on the city’s COVID-19 hotspots and only for elementary schools, as well as a choir school “where they're going to try singing inside” —  singing indoors is not permitted under COVID-19 restrictions.

A few schools across the country have also introduced outdoor learning environments, and one private school has actually brought in plexi-glass barriers.

School boards however and the Ontario ministry of education have not created a streamlined outdoor option.

The tents are similar to those that are used for outdoor weddings and can accommodate up to 60 kids. The tents can also be tied up and closed at night for safety measures and to prevent anyone from entering them.

“Two different classes could potentially go in. The pilot is scheduled to last for four months, so we'll probably start with one class at a time and then sort of see if we can make more work,” Di Pasquale said.

Dan Kajioka the CSPC Chair at St. Victor Catholic School and CPIC Chair of Ward 7, said it would give him peace of mind to know that his daughter can socially distance herself from other kids all while learning outside.

“Because maybe they’re learning and then it snows and then they’re just learning in a different way...It could be a permanent thing, you know, potentially normal. It's an exciting thing. I think you're making a difference in how kids learn,” said Kajioka.

Our new tent classroom!! Installed this morning and already in use for Phys Ed!! #WeGotThis @Markus4Ward2 @TCDSB @floracifelli @TCDSBdirector pic.twitter.com/fif6PDFZc6

The Equinox Holistic Alternative School holds outdoor classes, as well as schools in Northern Ontario, said Di Pasquale, so outdoor learning has always been on the periphery.

“The purpose of the pilot is just to see, ‘Is it viable? What are the challenges?’ [Then] we address those challenges and should we have a successful pilot, I think we would start to tend to the rest of our schools.”

After the end of the pilot, data will be collected on staff experiences, student experiences, custodians, and presented to the Board of Trustees with the recommendation on whether the pilot should continue, be stopped or expanded.

However, with the winter months right around the corner, the trustees are hoping to find arrangements to keep the project running smoothly and are hoping for businesses to donate heaters or lend them to the classroom tents.

Di Pasquale said it would not be ideal to buy heaters because the pilot project could be temporary.

“I mean, if there are people out there with industrial heaters who would be willing to lend them to us, it definitely knocks out like a significant question that's raised by the community.”

Kajioka shares his concern and said the board could end up stuck with heaters if they buy them so he’s hoping the community can step in as well.

“We’re asking ‘do you have heaters basically?’” and because it’s a pilot it still has to be determined what equipment will work, so there could be a risk, he explained.

The pilot project is the first streamlined project of its kind in Canada.

“There's definitely a lot of excitement from the community, from teachers, from staff. We’re all very excited,” said Di Pasquale.

by Raneem Alozzi via blogTO
Posted by Arun Augustin at 2:48 PM