Finding love in the middle of a pandemic is undeniably hard when you consider the fact that most of us are staying home more and socializing less (or not at all), but it's a little bit easier if you have friends that are willing to go to extreme — and hilarious — lengths to help you find it.

Fortunately, that's the boat Wesley Knowles is in at the moment. Because for his 24th birthday, his friends created a campaign called Find Love 4 Wes complete with posters, a website and a powerpoint presentation — all in the hopes of helping him find that special someone. 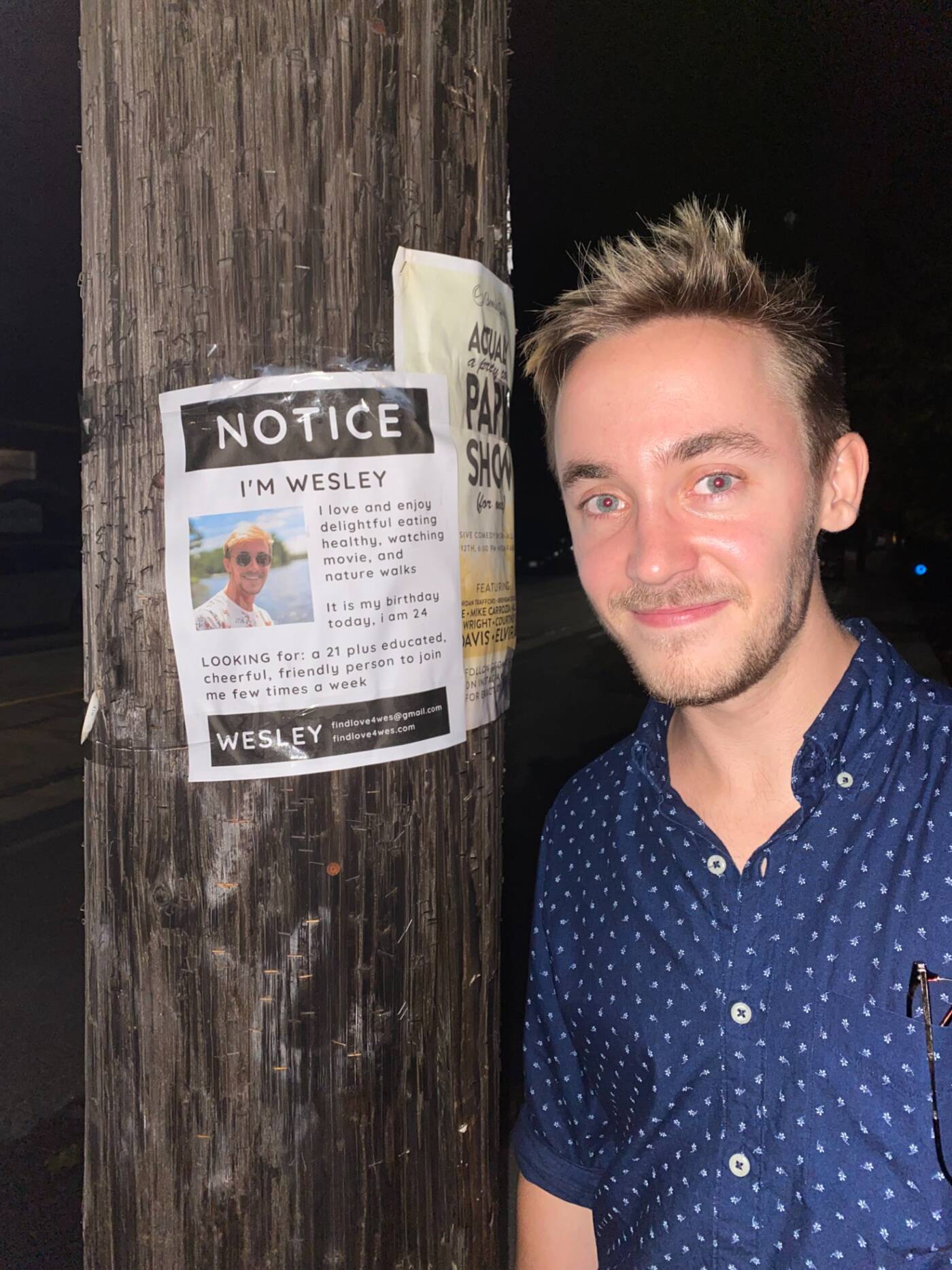 Wesley Knowles beside the poster intended to help him find love, made by Adam Sharanewych

"He kind of set the bar for birthday presents really high," said Adam Sharanewych, Knowles' friend and the creator of Find Love 4 Wes, when explaining that Knowles flew his girlfriend out to Vancouver to see him for his birthday last year.

"It was a really sweet gesture so I was like, Wes' birthday is coming up so I have to think of something."

Sharanewych told blogTO he was partially inspired by Knowles' top notch birthday gift, but also by the Ciao Roberto posters that have popped up all around Toronto in recent months. The combination of the two gave him the idea of making an all-out, public attempt at helping his friend find love.

"I didn't think they were going to get me anything," Knowles said. But get him something they certainly did.

First, Sharanewych built the website that includes photos of Knowles, a link to his Instagram profile and a submission form that asks questions such as "What is your Spirit Animal?" and "How much do you hate traffic?"

He then made the posters and put them up around Toronto with the help of their friends, including throughout the Roncesvalles neighbourhood and on Knowles' mom's driving route.

Then, on Knowles' birthday, Sharanewych presented a powerpoint slideshow explaining the gift during a Zoom call with all of their friends.

Knowles and Sharanewych on a Zoom call with their friends

"I thought they were joking," Knowles said. "I didn't believe them."

But it was far from a joke. In fact, Knowles had actually walked past the posters several times in his neighbourhood before the big reveal without even noticing.

And, much to their delight, the attempt to attract interested members of the opposite sex seems to be working so far, at least to some extent.

Knowles said they've gotten thousands of website hits, dozens of submissions, and even some new Instagram followers since they launched the campaign to help him find love just a few days ago.

Sure, some of them are little odd, but Sharanewych said most of the responses so far have been positive.

And while Knowles has yet to meet any of his potential suitors, he says he definitely intends to.

"I think best-case scenario would definitely be to meet somebody from this list," he said. "It doesn't mean falling in love with them, but meeting someone would be a pretty hilarious story."

Sharanewych, meanwhile, has some advice for anyone looking to meet someone in the age of the pandemic: "If you're looking for love in these trying times, you've got to get creative. You have to think outside the box and if you can do something to help out your friends, definitely do it even if it's just to get a laugh out of them."

But regardless of how this (love?) story turns out, Knowles said he's simply grateful to have good friends that are willing to go to such extreme lengths for a laugh.

"It's awesome having friends as cool as this," he said. "It's not often that you get a gift that's this creative and cool that doesn't cost a lot of money."

by Mira Miller via blogTO
Posted by Arun Augustin at 5:48 PM