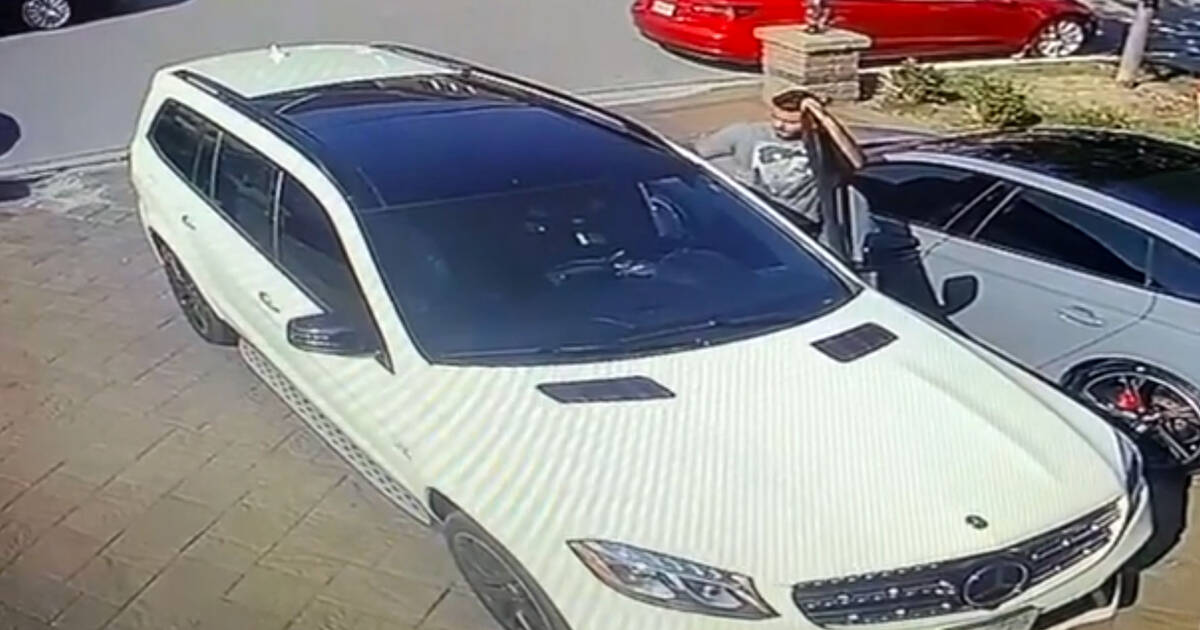 A Brampton family, whose car was stolen on Sunday in a brazen car theft that was caught on video, feel that police aren't doing enough to assist them.

The incident happened on Sept. 27 around 3 p.m., when a man was showing his family’s car to two individuals who had reached out after seeing the ad on Autotrader.  Because of recent car theft incidents, he invited some of his friends over so that the interaction was supervised.

His sister, Sanjot, who does not want her last name shared said two men arrived driving a Mercedes S550. “If you know cars, you know that’s an expensive car so we didn’t expect that this would happen.”

But Sanjot said as soon as the men arrived, one of them forced his way into the driver’s seat to inspect the car and repeatedly asked to test drive the car which her brother didn’t initially allow. Her brother was also leaning on the SUV so as to keep a close distance to the car.

He agreed to let the man test drive the car and personally inserted the key while his friends were about to get into the backseat of the car before the man in the driver’s seat quickly took off.

“He slammed the door, reversed like a maniac and speeds off behind the Mercedes,” she said. “They could’ve killed someone, it’s a residential area, there could’ve been kids.”

Sanjot said her brother and friends tried to chase them down in their cars but they had gotten too far away by then. They found a traffic constable who took a report and said someone from Peel Regional Police would be in touch soon.

However, Sanjot said no one has gotten in touch despite the family having ample video footage and several tips indicating the identities of the men. She then posted the surveillance footage on Instagram which quickly began making the rounds on social media.

I’ve seen so many videos of cars being stolen in Brampton, but I never thought it would happen to us. My brother posted our GLS63 AMG 2018 license plate CFAN 375 on autotrader. An individual by the name of Raj called my brother to ask to come to see the car today around 3pm. They were both wearing masks, one was a sardaar wearing a kara and an adidas track suit, the other was dressed in all black. Him and his friend came in a black Mercedes S550. As you can see my brother was with all of his friends showing these two individuals the car. One of them sat in the car to check it out, my brother had the key in his hands. They then asked to test drive the car. As my brother was walking to the passenger side, they took the key, drove off like maniacs and could have killed someone. I’m not making this post to find the car. I’m making this post to tell everyone that you need to be VERY careful in Brampton. DO NOT trust anyone and please be aware of your surroundings. My family was lucky enough that they just stole our car today. To those two trash people that stole our car, put my brother, his friends, and my family at risk, I hope you get caught and go to jail. People work so hard for what they have. I know my dad works day and night for everything we have. You people have no right to take anything from anyone. Please stay safe everyone.

Sanjot said she called Peel police several times in the last 24 hours and was told yesterday that the constable assigned to their case was not available and that she should call again later.

Media relations officer Const. Danny Martini said if an officer is already assigned to the case, it would imply that it has been reported, and therefore it would be under investigation.

Once the officer is working they will continue their investigation, the family can also reach out at that time by calling or emailing, she said.

“We’re pissed off and we don’t feel safe. I feel helpless. I feel like I’m doing [the police’s] job,” she said.

After posting the video, Sanjot said they’ve received a lot of support but also a lot of backlash because of fraudulent carjacking incidents in the area.

Earlier this month a 20-year-old Brampton man was charged with six criminal charges including robbery and dangerous operation of a stolen motor vehicle.

In August, Peel police recovered more than $4.2 million in stolen vehicles after taking down a car theft ring and charging 21 people.

by Raneem Alozzi via blogTO
Posted by Arun Augustin at 6:48 AM