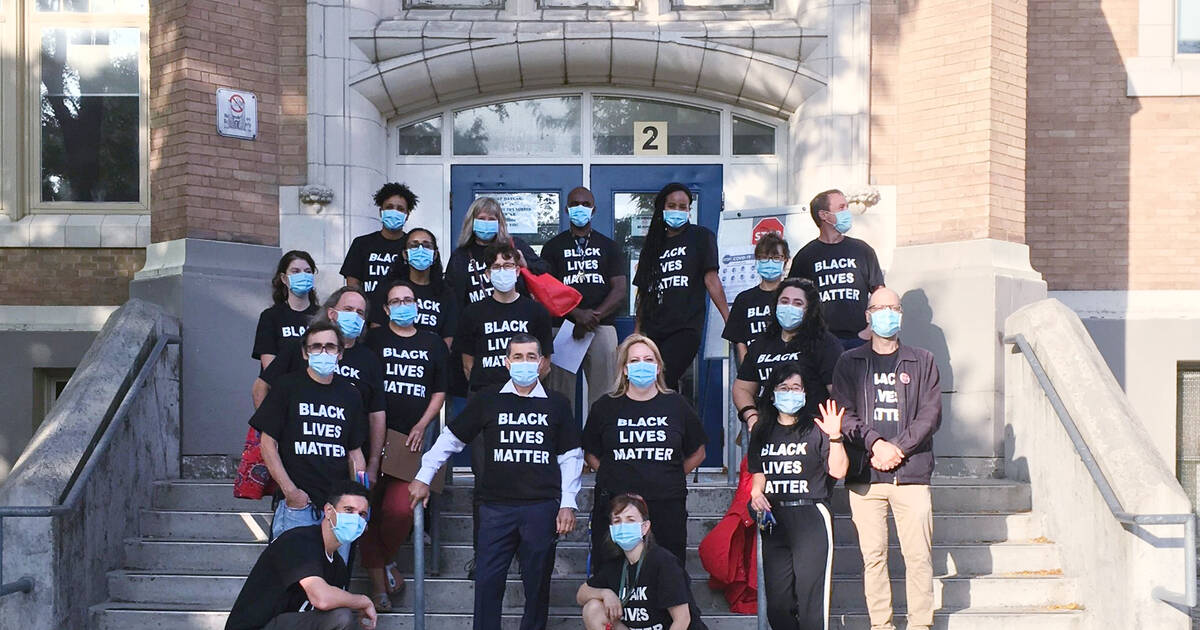 A Toronto high school has taken a stand against racism — as cafes and artists have before — with the principal, vice principal, teachers and staff wearing shirts reading "Black Lives Matter" on the first day of classes.

Photos of the staff at Oakwood Collegiate Institute wearing the shirts standing on the steps of the school have gone viral, one on Facebook garnering more than 500 likes and a post on Twitter getting more than 200 likes.

Though there are some dissenting comments from the usual Internet trolls, most are making comments like "fabulous," "love this," "awesome" and "powerful and beautiful."

Lesley Wallace, the school's vice principal, said the initiative was a collective effort with several staff members suggesting it.

"I added the Think Other, Think OCI to the back (of the shirt)," Wallace says. "It's kind of like our slogan, we have a mantra that we say each day on the announcements."

The mantra goes: "Take care of yourself / and each other / Strive to be the best you can be / Don’t be afraid to be different / Be an original / Take risks / Think outside the box / Think Other / Think OCI."

It is important for teachers to acknowledge that student's lives matter, that racism exists and that staff is committed to "challenging white supremacy and anti-Black and anti-Indigenous racism," says Mitch, an English, Special Education and Native Studies teacher.

"One of my students made a parallel in class - that just playing the land acknowledgement without actions that challenge anti-Indigenous racism is like wearing a T-shirt without commitments to challenge anti-black racism," Mitch says. "Wearing the T-shirt is a symbol of that commitment to do the work."

At first, the staff members wearing the T-shirts were greeted with smiles and the typical teenage aloofness of 'cool,' says Wallace.

"Later on, in classes, students started asking if they could purchase one as well. Other students told their teachers that they were impressed and knew that this came directly from Oakwood teachers and not some directive or mandate," she says.

Wallace says she's most proud of people responding to the photo with comments saying they're alumni or will be attending Oakwood soon.

The high school has implemented several strategies to fight racism within their own walls.

"Our school is not perfect and is a microcosm of society but we work everyday to address oppression at a classroom and school level," says Wallace.

The school administration follows a Restorative Justice model for discipline that aims to show students the impact of their actions and allow them to repair any harm they've caused. The goal is to reduce the disproportionate suspension of Black students within the TDSB.

The school also offers English and art credits centring around First Nations, Métis and Inuit cultures and voices. Active student-driven groups like QSA and AfroCan address the needs of marginalized Black and queer youth with initiatives throughout the school year.

Every single student deserves to feel as safe as possible this school year, so the solidarity of the staff at Oakwood Collegiate is definitely exemplary.