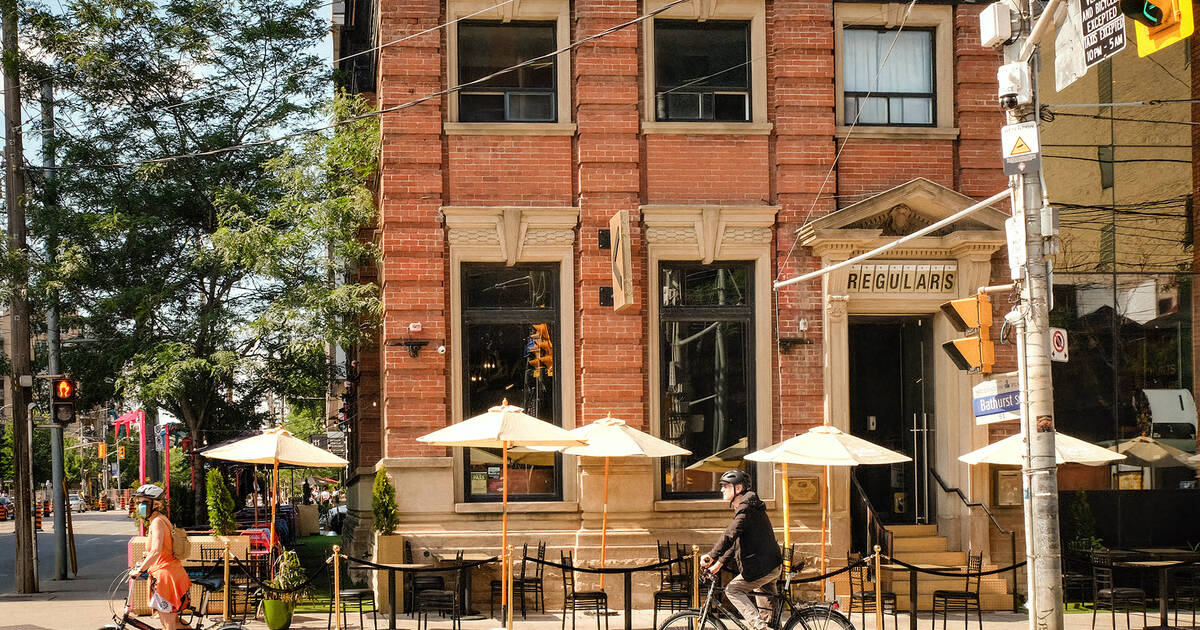 Though this weekend was one of the few we have left to enjoy perfect patio weather in Toronto, it was not a good one for bars, especially for a number of establishments along King West, including Regulars Bar.

The two-year-old watering hole at King and Bathurst is just one of several bars that unfortunately reported outbreaks of COVID-19 among both staff and/or patrons in the last few days as case numbers in Ontario continue to spike, especially among people under 40.

Approximately 600 people who were potentially exposed to the virus between Sept. 13 and 22, Toronto Public Health (TPH) reported on Sunday, with three employees testing positive.

The business made a social media post that same day to notify customers of the news.

DEAR REGULAR'S FAMILY In an effort to be transparent with our guests and community, please note that three of our staff members have tested positive for COVID - 19 with an exposure period from September 13th - September 22nd, these staff members went into quarantine at an early stage. We are happy to announce that these staff members are in good health and recovering. If you have not been contacted by Toronto Public Health you are not identified as having had close contact and are viewed as low risk, however if you visited our establishment during those days please monitor symptoms and take the necessary precautions. Toronto Public Health has commended Regulars on our cooperation throughout the investigation and have deemed there is no ongoing risk and cleared us for normal operations. HOW WE ARE KEEPING YOU SAFE - All employees must be wearing a mask upon entry and throughout the duration of their shift. - All employees are temperature checked upon entry before they start their shift. - All employees are required to wash their hands thoroughly and continuously throughout their shift - All staff is mandated to maintain a 6ft distance from colleagues and guests when possible. - All employees must sanitize their hands regularly throughout their shift at one of our many sanitizer stations. - Each guest table is given their own personal sanitizer - Washrooms are cleaned upon every visit by a dedicated employee. - All High contact surfaces are covered with ProtekPak (antiviral & antimicrobial surface protection) - All Surfaces are cleaned regularly to ensure a safe sanitary environment. Regulars Management Team,

"In an effort to be transparent with our guests and community, please note that three of our staff members have tested positive for COVID - 19," management wrote on Instagram.

The bar also stated that Toronto Public Health has already reached out to those most at-risk for contact, but that all who frequented the bar during the aforementioned period should monitor themselves for symptoms.

Also, that the bar has since been permitted to resume normal operations, and what it has allegedly been doing to help keep employees and guests safe.

But some residents posted videos of the Regulars patio during the summer that do not seem to show strict adherence to provincial pandemic guidelines, especially physical distancing.

@cityoftoronto @blogTO Is this what Stage 2 means Toronto? Regulars Bar, management and the people who worked there as well as customers seem to be completely oblivious to social distancing and masks. WTF!! #COVIDIOT #covid19to #Toronto pic.twitter.com/jCWfDVOFFS

Still, in its notice about the outbreak, TPH thanked the bar for its cooperation both during the investigation and with implementing proper measures during this time.

The province has been seeing a surge of cases in recent weeks, with new daily case counts hitting numbers we haven't seen in months — 926 new patients were confirmed over the weekend alone.

Premier Doug Ford implemented a strict 11 p.m. last call and midnight closing time for bars province-wide on Friday, though the outbreaks at Regulars and other bars had already happened by that point.

Yonge Street Warehouse just announced seven infections on its premises, with a contact period earlier this month, while three King Street bars were shut down after the city found "people infected with COVID-19 were employed at more than one of these locations," among other concerns.