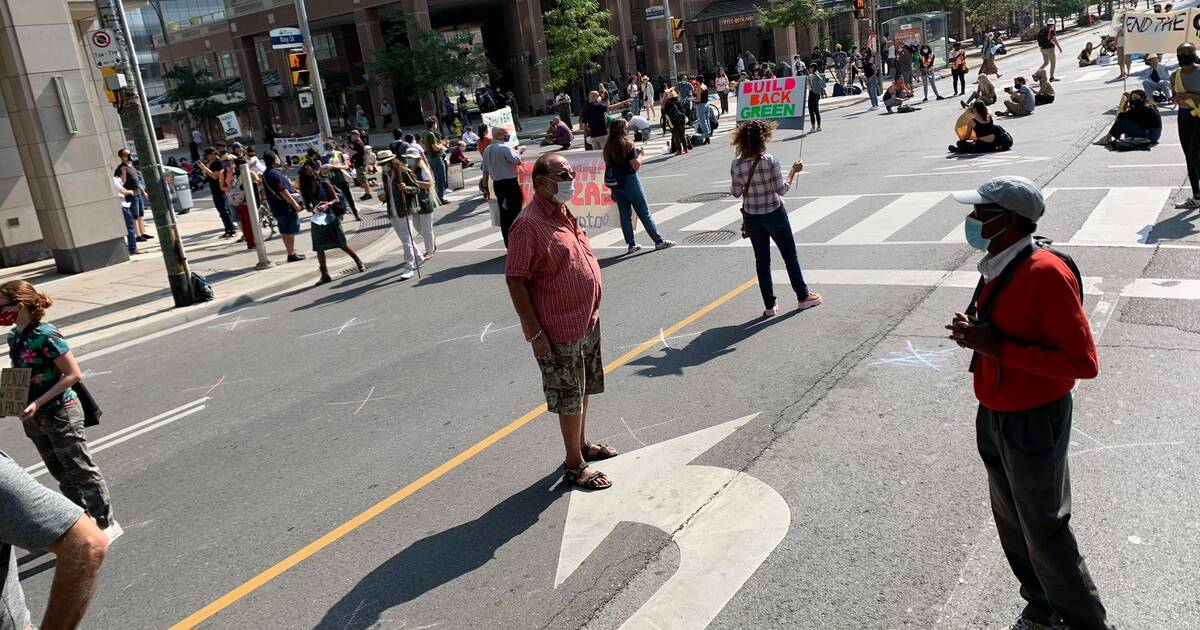 Climate activists blocked off the Bay and Wellesley intersection in downtown Toronto this afternoon to hold a socially distanced sit-in and demand immediate action on climate change.

The protest, organized by Fridays for Future Toronto, is one of many Global Day of Climate Action demonstrations taking place all over the world today, including in other Canadian cities such as Halifax and Vancouver.

What a huge success! With masks and socially distant, hundreds of thousands returned to the streets, demanding climate action, in over 3200 places on all continents, including Antarctica!
The fight for a future doesn’t end here. This is just the beginning.#fridaysforfuture pic.twitter.com/vVanewJ8mF

In Toronto, activists gathered from 12 p.m. to 3 p.m. at Bay and Wellesley streets for the protest, and participants were asked to remain six feet apart, wear a mask and practice hand hygiene to avoid spreading COVID-19,

The Climate Revolution In Toronto! https://t.co/6cD2KpSYtE

Marshals were also on scene to direct protestors to designated seating areas for the sit-in and to enforce COVID-19 regulations.

Protestors meanwhile held signs with sayings like "Break free from fossil fuels" and "People for the planet," and repeated chants such as, "When our future's under attack what do we do? We fight back."

At one point, Indigenous drummers and singers also performed an inspiring song for fellow activists.

Indigenous singers and drummers share a song with youth, seniors, and everyone in between, Torontonians rising up on Bay street, calling for action on climate change. @TOforFuture pic.twitter.com/yZfX35RsuC

Before the pandemic hit, youth-led Fridays for Future groups all over the world had been hosting weekly strikes to demand swifter and more drastic action on climate change — a movement which was first started by Swedish teen environmentalist Greta Thunberg.

Why ⁦@fordnation⁩ have you refused since you began governing to meet and listen to our young people ⁦@TOforFuture⁩? It is simply wrong. Show some respect. pic.twitter.com/9w6kFhMRQQ

The arrival of COVID-19 forced most of these in-person demonstrations to a halt, but today young advocates returned to the streets to demand that governments put a greater emphasis on transitioning away from fossil fuels and invest in a greener future for all.