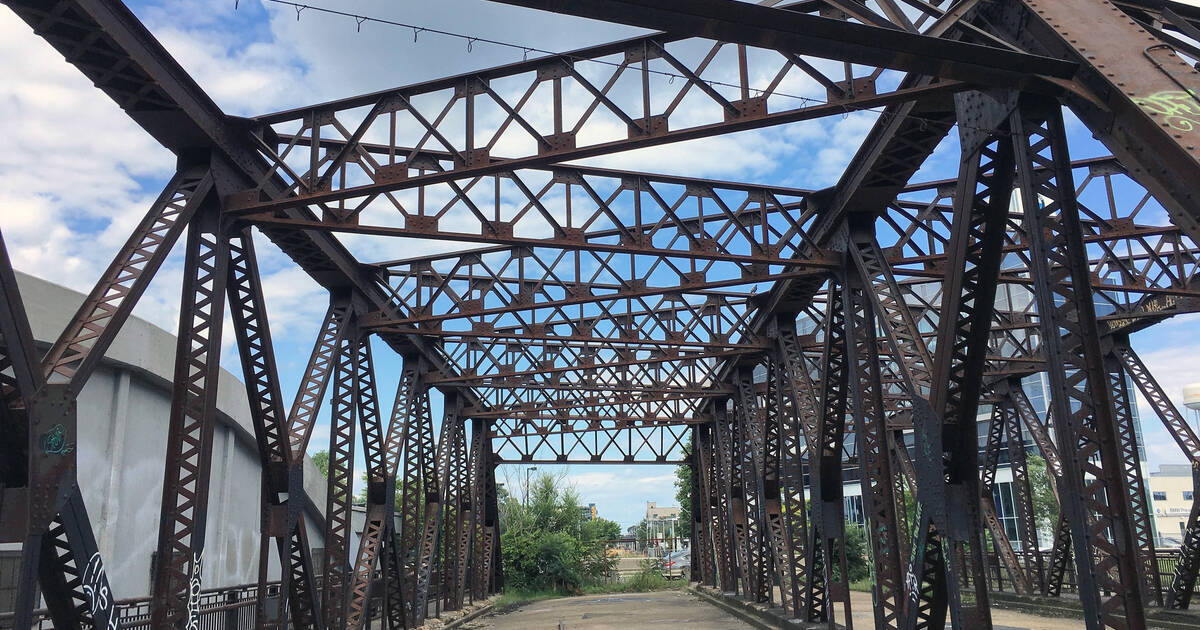 If you've lived in Toronto long enough, you've probably come across a few of the city's various hidden streets. And if you're even a bit of a local history buff, you probably also know about some of Toronto's lost street names.

But what about the ghost streets that can still be found around the city, abandoned roads that have yet to be completely wiped from the urban environment? Stumbling upon one of these is like encountering a time machine, where you can travel to an earlier version of Toronto.

I won't profess comprehensive knowledge of Toronto's abandoned streets, but I'm happy to share the ones that I've encountered and explored over the years. 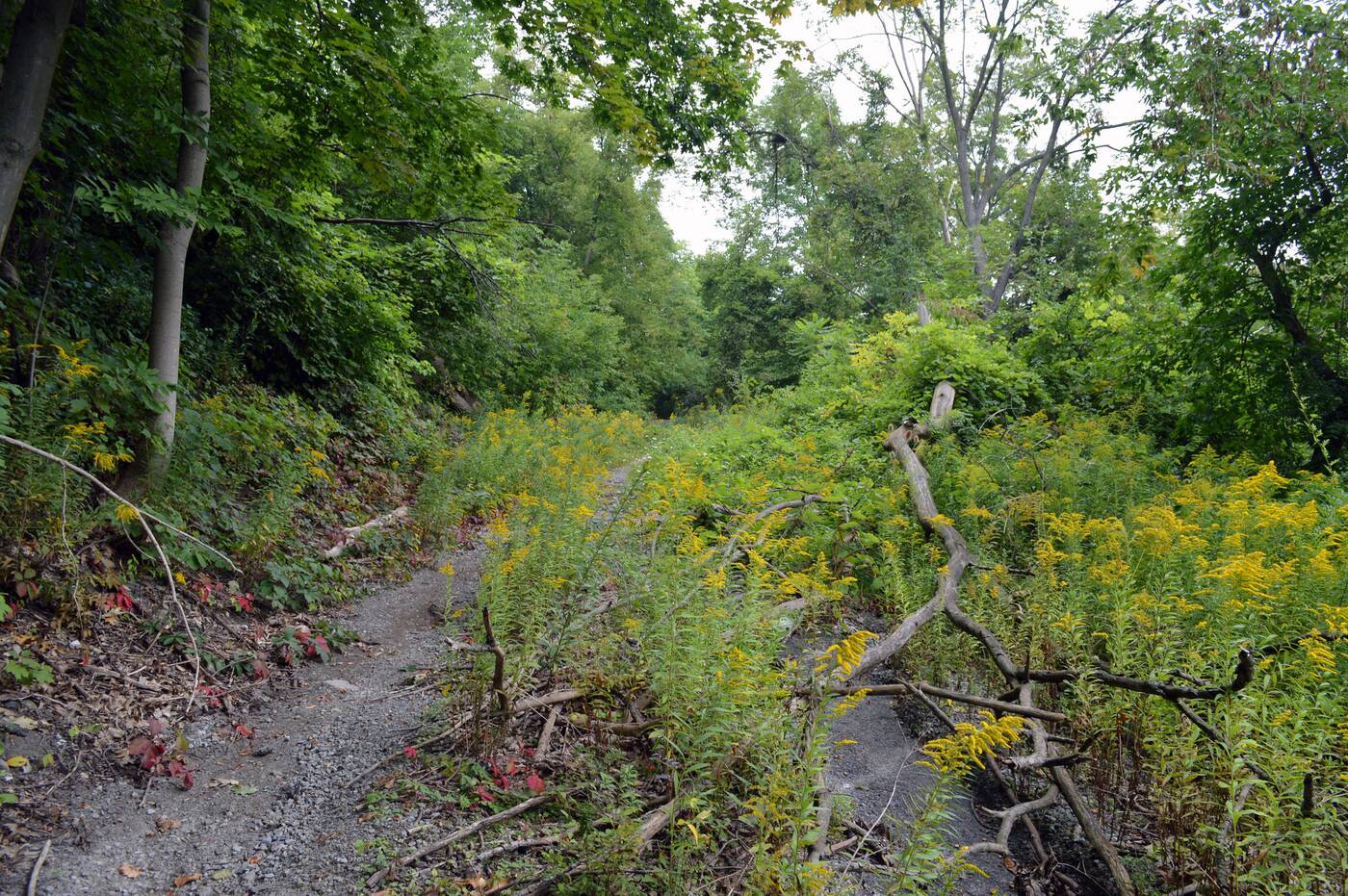 Despite the overgrowth, you can still see the old route of Pottery Rd. Photo by Patrick Cummins.

My favourite of the bunch is probably Pottery Road, which was far different before the Bayview extension was built.

If you look at a map, you'll see that there are two sections to this street: the main thoroughfare that runs up the wall of the Don Valley beside Todmorden Mills and a tiny section to the north beside the Loblaws parking lot at Moore Ave.

Believe it or not, these used to be connected back in the day, and you can actually still see very obvious signs of the route the street once took. In fact, you can hike much of the route on foot to this day. 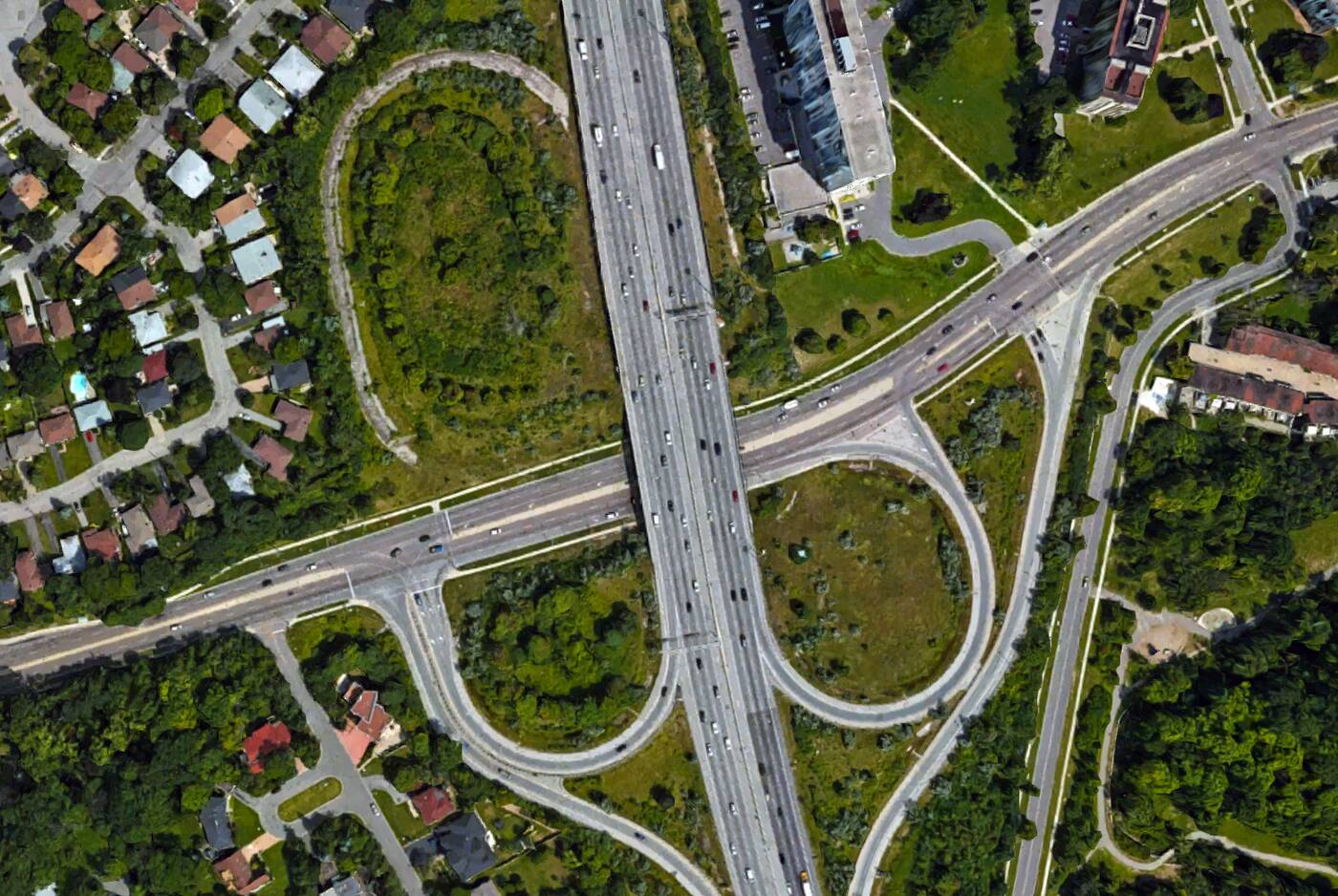 One of these ramps is not like the others. Image via Google Maps.

For a ghost street that feels a bit more post-apocalyptic, the abandoned DVP off-ramp near York Mills is worth a visit. It's actually only been out of commission since the mid 2000s, but it has that wonderfully eerie look of disuse that hints at how slowly our infrastructure is reclaimed by nature.

A similar situation can be found at Indian Line near the 427 and Finch Avenue West. The last portion of this road was closed in 1992, but some remaining sections are so prominent, they're still marked on Google's maps. 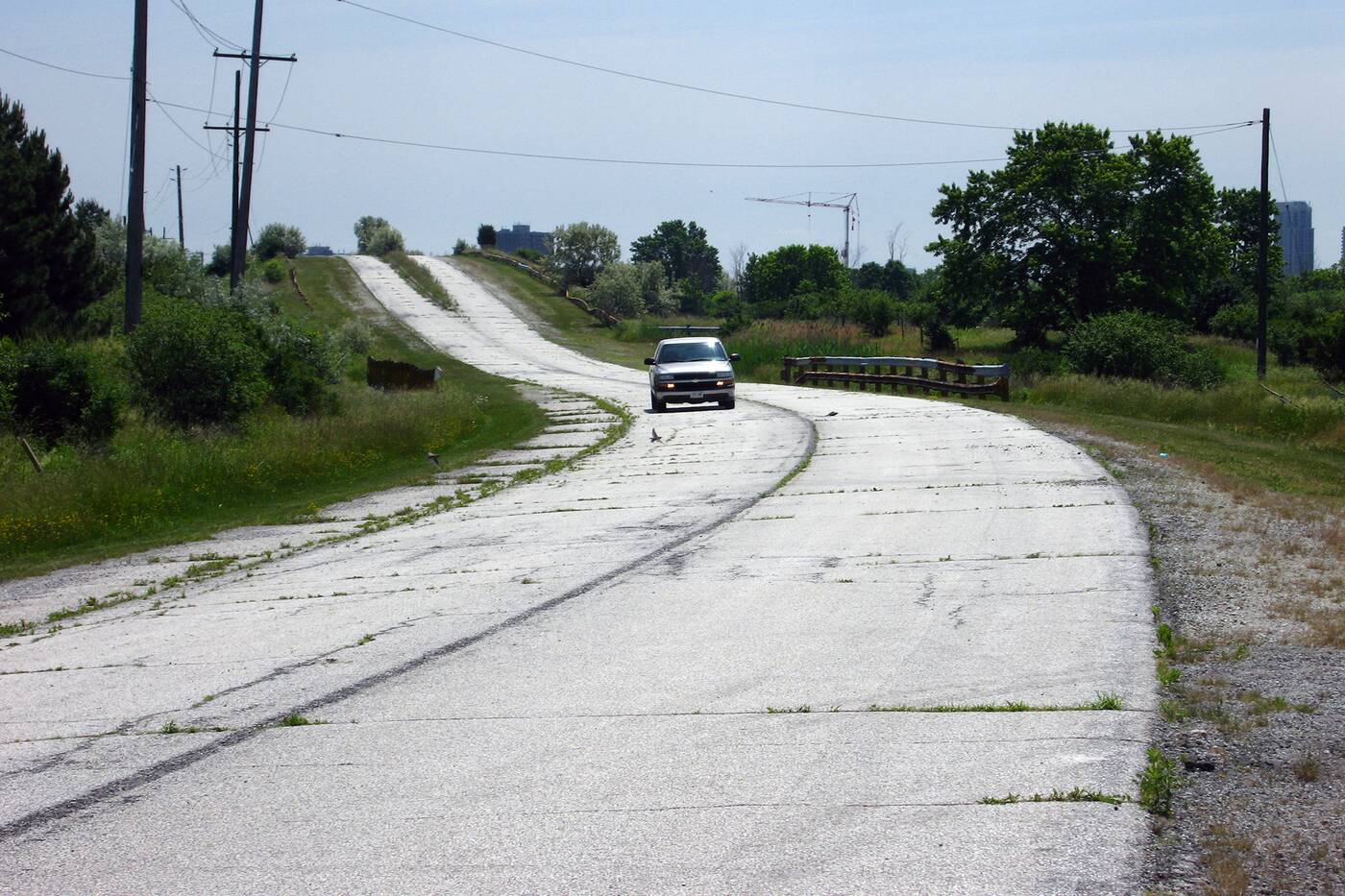 Indian Line was relegated to its current ghost status over the course of many years, starting with the arrival of the 427. What's so amazing about it today is that parts of it are extremely well preserved. It's a bit of a concrete jungle in sections, but there remains an allure here.

One of my favourite bits of ghostly urban infrastructure in Toronto isn't really a street, but the old Eastern Ave. Bridge that you encounter when travelling along the Lower Don Recreational Trail.

Not only is it easy to make sense of the old road alignment when you venture onto the bridge, but it's a secluded place to soak up the strange charm of this portion of the Don Valley, which is both natural and industrial (for now). 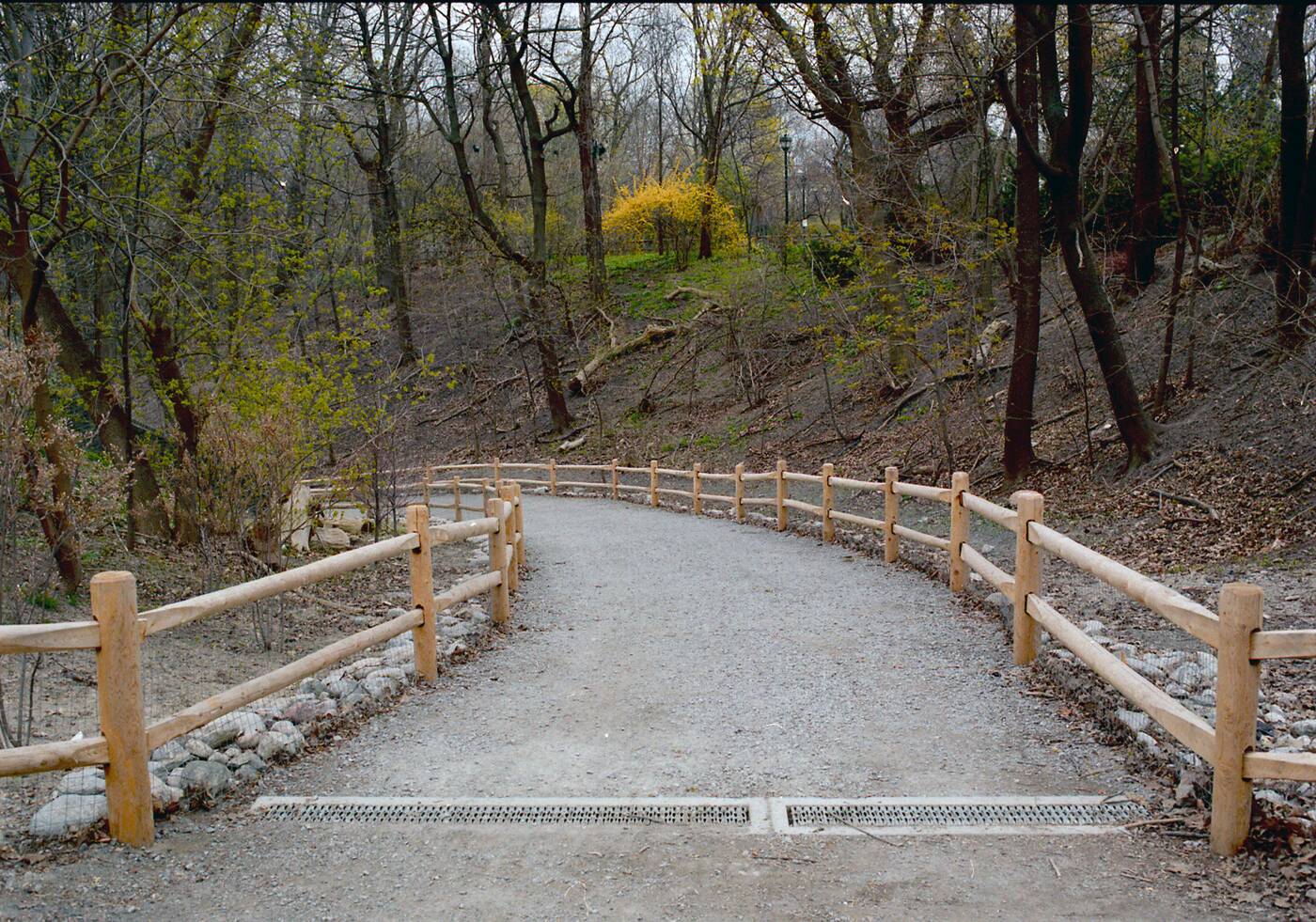 Now used as a hiking trail, Milkman's Lane was quite obviously an old roadway. Photo by Adityo Sastromuljono.

There's a host of other abandoned or sometimes re-purposed roadways scattered across Toronto as well, from the Don Mills Bridge to Milkman's Lane, and Old Post Road. All are worth taking note of and considering the degree to which they suggest that the city is in a continual state of flux.

It's easy to forget this, of course, but when you encounter one of these apparitions, the sense of history as an active process dawns you as if someone say "boo!"