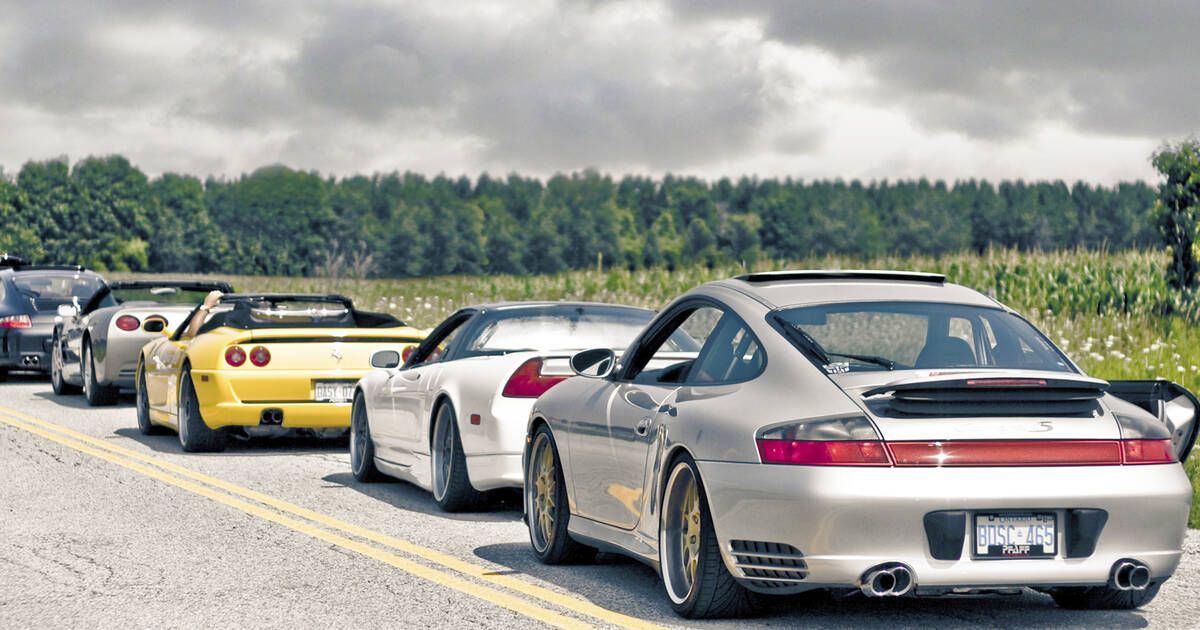 Less than a week after more than 1,000 people were busted breaching provincial gathering limits at a car rally in Ancaster, the street racing yahoos were at it again this weekend, this time in Wasaga Beach.

Visitors were finally barred from entering the area on Saturday night after thousands of people poured in to attend the H20i car meet in the beachside town of just 20,000 residents starting Friday.

Ontario Provincial Police (OPP) told the CBC that physical distancing at the illicit event was "not even a possibility" as they struggled to seize vehicles, make arrests and issue tickets among the large crowd for stunt driving and emergency order-related offences.

Cops were also harassed by some of those present as tensions escalated and they tried to maintain control of the group.

Additional officers from York Regional and Peel Regional Police had to be called in for backup for the event, which law enforcement had anticipated might get out-of-hand.

OPP responded to a massive unsanctioned gathering in Wasaga Beach Sept 25-27, 2020.
Some of what we witnessed as seen from #OPPAviation pic.twitter.com/30Z98be3N4

Not only was the get-together obnoxiously large and in complete disregard of the global pandemic, but also featured dangerous and infuriatingly disruptive driving antics not limited to drifting, speeding and burnouts.

From the looks of this Wasaga Beach story on Snapchat tonight, it sure looks like the recently implemented provincial rules about outdoor gatherings are being totally ignored. Streets full of loud cars for #H10i, an unsanctioned car rally. Plenty of OPP units on scene. #COVID19 pic.twitter.com/En76KT2A9T

Locals of the municipality near Barrie — as well as Ontarians in general — are furious about the incident, to say the least, especially as COVID-19 case numbers keep on spiking in the province.

Of particular concern is the fact that numbers are now highest among young people under 40, ostensibly the key demographic that has been getting out to patronize bars and socialize as the summer comes to a close.

To everyone shaming the Wasaga Beach rally: it takes courage to admit you have both a micropenis AND a 2003 Honda Civic

Today's stats marked the highest number of positive diagnoses we've seen in a one-day period since the health crisis began as the provincial government starts to re-implement stricter lockdown measures such as closing bars earlier in the evenings and cutting social gathering limits provincewide.

Many are condemning attendees for their brash idiocy, and local authorities for not being tough enough with enforcement — something that has been a running complaint lately, even from Premier Doug Ford.

Wasaga Mayor Nina Bifolchi called out the event, referring to it as an uncontrollable "invasion," but said in a statement that officers did the best they could under the circumstances.

What are you going to do about the Wasaga Beach Rally of morons? Find them, fine them in a big way and put organizers in jail.Small fines & warnings don't work,get tough. Bring in the military if necessary.These A'holes are costing taxpayers money and spreading the virus. FIX IT

In an ultimate act of arrogance, some participants have seemed to show zero remorse, even vowing to return again next year: one car buff who travelled to the meet from Montreal told CTV News "We took over, and we're going to take over again next year, 100 per cent."

The Wasaga Beach Fiasco is just another example of stupid , irresponsible, actions committed by young people who have absolutely NO concern for ANYONE’S health or safety . Their parents must be SO proud ! F’N IDIOTS .

As select groups continue to disobey pandemic orders so brazenly, we'll have to see how much worse the second wave gets as we move into flu season — and whether an earlier form of lockdown will be brought back to keep things in check.