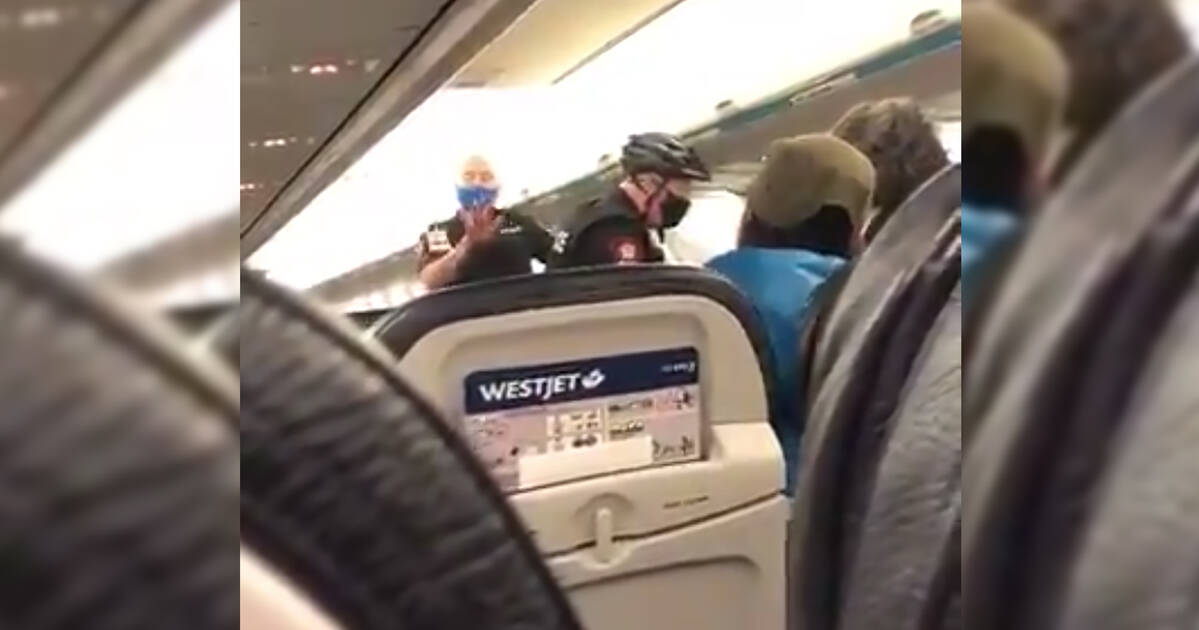 Hundreds of WestJet passengers aboard an already-seated flight from Calgary to Toronto were furious on Tuesday morning upon learning that they wouldn't be taking off after all due to an unmasked infant.

Yes, by the admission of the airline itself, Flight 652 was abruptly evacuated (for "security and safety reasons," as one irate flyer says he was told) over a young child's failure to wear a face mask.

"Earlier today my family endured the most horrific and dehumanizing treatment onboard a WestJet plane," wrote the 19-month-old girl's father, Safwan Choudhry, on Twitter following the incident.

"My wife was threatening to be arrested and forcibly removed unless my daughters, 3 yrs and 19 months, would wear a mask. While my 3-year-old wore her mask, the 19-month-old was hysterical."

"Several WestJet crew members wrongfully citing [Transport Canada] policy for enforcing my 19 months to wear a mask," he continued. "Eventually, the entire flight was cancelled and all passengers were removed from the plane."

Choudhry linked to the Canadian government's COVID-19 information for travellers website, which clearly states that children under 2 years old "should not wear a mask."

Earlier today my family endure the most horrific & dehumanizing treatment onboard @WestJet plane. My wife was threatening to be arrested & forcibly removed unless my daughters, 3 yrs & 19 months would wear a mask. While my 3yrs wore her mask, the 19 months old was hysterical. pic.twitter.com/MHnaTnKgCU

WestJet, which recently implemented a "zero-tolerance" mask policy that could see non-compliant customers banned from using their services for a full year, confirmed on Tuesday that the flight in question was cancelled due to mask issues.

"Flight 652 from Calgary to Toronto was cancelled last night after guests travelling on employee travel passes chose not to comply with the Transport Canada order related to the wearing of masks on-board the aircraft for all guests 2 years and older," said the Canadian low-cost carrier in a statement to CTV.

Choudhry's 19-month-old daughter was identified as an infant on her boarding pass, meaning that she was indeed exempt from the mask policy. It wasn't the baby that caused the problem, however, according to WestJet: It was the family's three-year-old daughter.

"WestJet would like to clarify that there were two children, and we were not requiring the infant to wear a mask, but did require the other child, who is over age two, to wear one," said WestJet spokesperson Lauren Stewart to CBC News.

"We are disappointed that this issue ended ultimately in a flight cancellation for all guests on board."

Choudhry and other passengers maintain that the toddler had been wearing her mask without incident, though, and flight attendants had taken up issue with the younger child.

The father of two told CBC that he and his wife even tried to get their 19-month-old to wear a mask while the crew watched on, despite government policy.

They stopped after the child grew so hysterical that she threw up, at which point he says they were asked to leave the plane.

Racists at @WestJet got police to force a family off flight over 19-month-old's inability to keep mask on.@WestJet, is child abuse your policy? You let passengers yell #racism at them on board + masking made the baby so hysterical she vomited in her mask.https://t.co/r1MiSje78q

Whatever happened, Calgary Police and airport officials were eventually called in to speak with the group. Some 45 minutes later, the flight was cancelled and the captain told passengers to disembark the aircraft.

"While the sudden shocking decision by WestJet to cancel the entire fight moments before take-off caused some passengers to hurl racist and Islamophobic remarks at my family, we are incredibly grateful and humbled by the overwhelming support and love from a majority of the passengers," wrote Choudhry on Twitter.

"We wish to extend our sincere regards and prayers for the passengers who had to endure any form of discomfort and hardship, we're glad to learn that most passengers have made it to their destination," he continued.

"Anybody with experience raising young children knows you can't just order a 19 month old child to stop her tantrum. It takes patience and love to calm a child of that age down, which were something Westjet and the police did not afford her," wrote one.

"They forced a 19-month-old baby to cry so hysterically that she threw up," wrote another. "WestJet, the very least you could do is apologize."