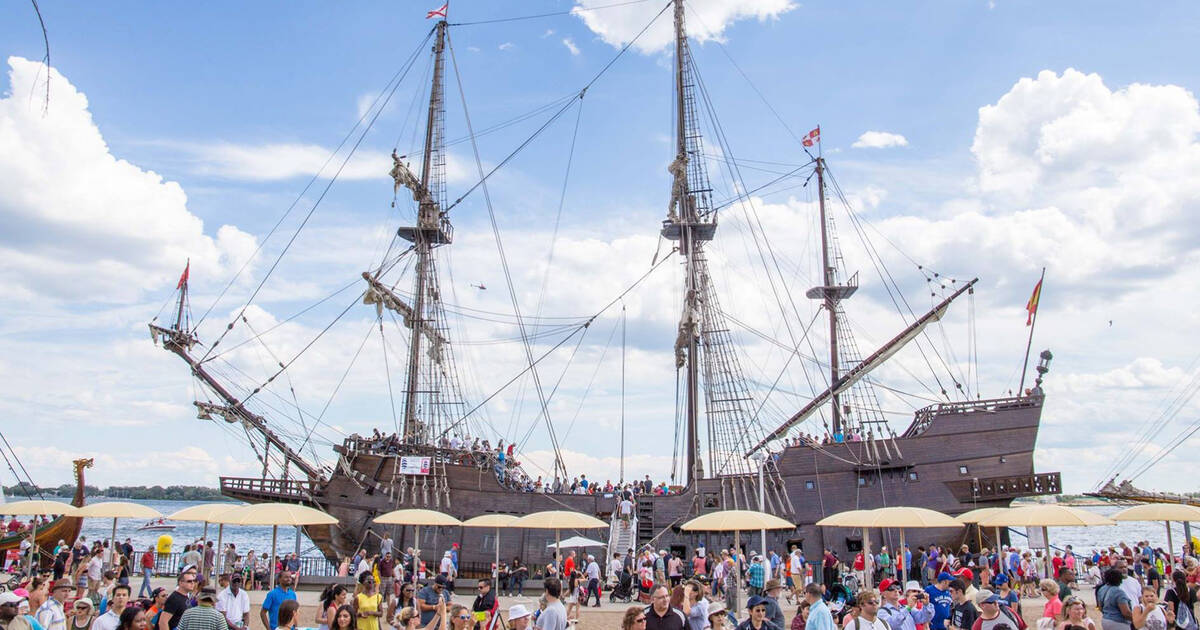 The Canada Day long weekend in Toronto for 2019 offers plenty of things to do, see, eat and drink over the next three (very hot) days. Food and music festivals are part of the fun while the tall ships are coming in. If you're planning ahead for fireworks, we've got you covered.

Indie Fridays (June 28 @ Yonge-Dundas Square)
A new season of indie music kicks off at YDS with the first set of free performances from Logan Staats, Wake Island and Janette King.
Bud Light Dreams (June 29-30 @ RBC Echo Beach)
Zedd, Rezz, Louis the Child and Nghtmre & Slander are just some of the EDM/house/trance DJs dropping by to play at Echo Beach.
Waterfront Festival (June 29 - July 1 @ Sherbourne Common)
The Maritimes are coming to Toronto at this year's Waterfront Festival featuring a fleet of tall ships, market and traditional music and performances.
Pedestrian Sundays (June 30 @ Kensington Market)
Kensington Market is going car-free for the day during this huge street festival with music, dancing, games, food, activities and shopping.
Tom's 50th Anniversary Celebration (June 30 @ Tom's Dairy Freeze)
This Toronto institution for ice cream is celebrating the big 5-0 with an all-day party including free hot dogs and cotton candy, activities and music.
Christie Pits Film Festival (June 30 @ Christie Pits)
The Christie Pits Film Festival is back with its 'dynamic duos' theme that starts with a free/PWYC screening of Rafiki in honour of Pride.
Urbani_t (June 27-29 @ Nathan Phillips Square)
This big arts, fashion and music festival continues this weekend with vendors setting up shop in the Square alongside shows and more.
Queen's Plate Festival (June 28-29 @ Woodbine Racetrack)
Dress your best for this annual festival that sees some of the world's fastest horses racing, plus live entertainment, food and drinks.
Diversity Festival (June 29-30 @ David Pecaut Square)
Toronto's diversity is on full display at this big festival with food, music, performances, fashion, shopping and art from around the world.
Community Sundays (June 30 @ MOCA Toronto)
The MOCA is opening its doors for free this Sunday, allowing access to all of its exhibitions throughout the museum.
Taste of Asia (June 28-30 @ Kennedy Road from Steeles Ave E to Clayton Drive)
Over 120 vendors are setting up shop at this big Asian food festival with flavours from different countries, performances and shopping.
Ribfest (June 28 - July 1 @ Centennial Park)
It's ribbing season and this massive festival is celebrating 19 years of sticky and sweet goodness with a long weekend of food, music and a big midway.
Duke Eats Festival (June 29 @ Finch and Keele Commercial Centre)
Food trucks and local vendors are serving up a huge variety of eats at this big food festival with a craft market, kids activities, entertainment and more.
Sustainable Block Party (June 29 @ Organic Garage in the Junction)
Back again is this big block party dedicated to vegan goodies of all kinds with a huge variety of plant-based food, eco-friendly vendors, speakers and more.
Plastic Crimewave Syndicate (June 28 @ Velvet Underground)
It's a night of high-fi fuzz and plenty of feedback with Chicago's Plastic Crimewave Syndicate's comic free rock sound.
GOT7 (June 30 @ Scotiabank Arena)
Get ready to swoon as the boys of K-pop mega group GOT7 are dropping by Toronto as part of their Keep Spinning international tour.
Toronto R&B Sounds (June 30 @ The Baby G)
Soulful grooves and smooth sounds are on as Toronto's local emerging R&B singers drop by for an night of intimate song.
Nick Murphy (June 30 @ The Danforth Music Hall)
While you might know him as Chet Faker, Nick Murphy is stripping down his sound and getting back to himself with a set of personal indie tunes.
Brazil (June 28-29 @ Cinesphere at Ontario Place)
Director Terry Gilliam's 80's-drenched dystopian fantasy sees the tables turning on a bureaucrat that becomes an enemy of the state.
Ask Dr. Ruth (June 28 - July 4 @ Hot Docs Ted Rogers Cinema)
The one and only Dr. Ruth has been dishing out sex advice for the last 30-plus years and this new documentary looks at her trailblazing career.
The Blair Witch Project & Hellraiser III (June 29 @ Revue Cinema)
It's a night for psychological thrillers and outright horror as the Revue screens both The Blair Witch Project and Hellraiser III in 35mm.
Eye Myth Art/Experimental Film Fest (June 29 @ 187 Augusta)
New art and experimental works by Canadian and international filmmakers are on at this festival, plus drinks and discussions.
Tyga (June 29 @ Cabana Pool Bar)
Rapper Tyga is setting the mood at this huge poolside party with an afternoon of beats and support by Jed Harper and Chris Laroque.
Sunnyside 21 (June 29 @ Sunnyside Pavilion & Cafe)
The Canada Day weekend celebrations are going down at Sunnyside with DJ Derrick Carter spinning the beats alongside Richard Brooks and Miz Megs.
Summerdaze (June 30 @ 54 Fraser Ave)
A stellar lineup of DJs are on at this outdoor party that includes producers from Burning Man, plus food, drinks and artisans on-site.
Annex Summer Night Market (June 28 @ The Tranzac Club)
Local artists, crafters, musicians and makers are dropping in for this summertime night market that's fundraising for the programming at Workman Arts.
TKEES SWIM Pop-Up (June 29 - July 31 @ TKEES SWIM)
Hit the beach in style with new pieces from TKEES popping up for the weekend to feature swimwear and accessories, treats and music.
Flamingo Market (June 30 @ Buddies in Bad Times)
Local LGBTQ2SIA+ business owners and makers are on hand with a big range of goodies at the special Pride edition of this market.
Ontario Vintage Market (June 30 @ Evergreen Brick Works)
Vintage hunters from all over the province are dropping by for this monthly market with a huge, curated selection of clothing, art and antiques.
Toronto Jazz Festival (June 21-30 @ Multiple Venues)
It's the last weekend to catch performances by musicians from all over the world as the Jazz Festival wraps up for another year.

by Lisa Power via blogTO
Posted by Arun Augustin at 9:55 AM