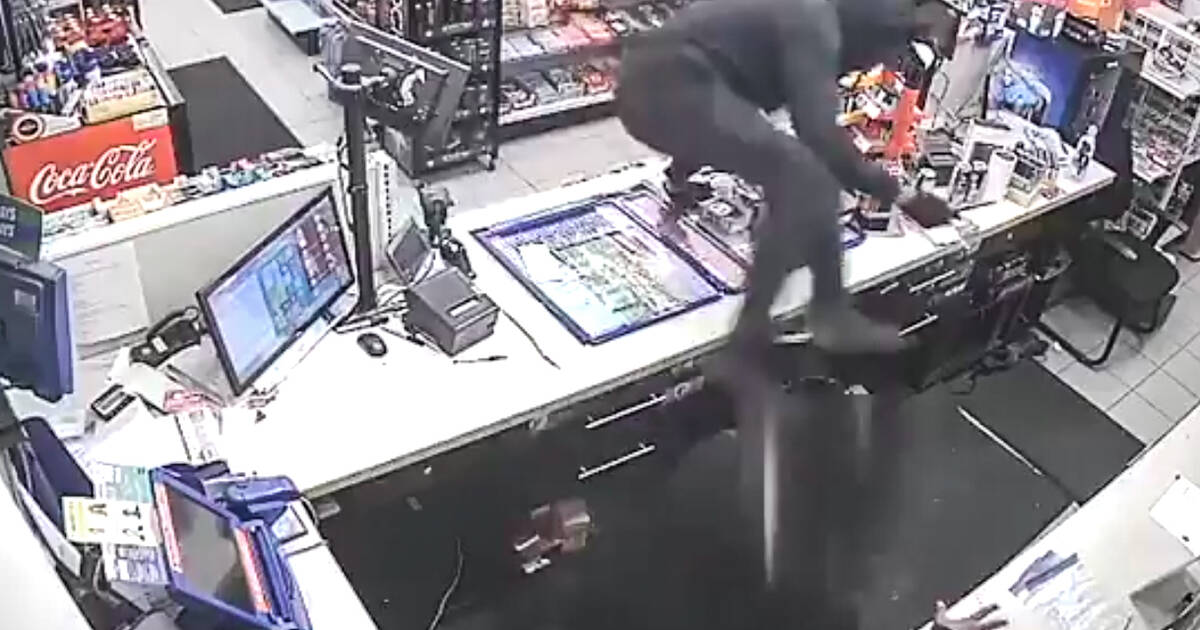 Police are searching for the man who was captured on camera viciously and relentlessly assaulting a gas station attendant near Toronto's St. Lawrence Market in the early morning hours of June 13.

Toronto Police Service Hold Up squad Inspector Lauren Pogue appealed to the public for help in identifying the suspect during a press conference on Wednesday morning, calling the attack "unprovoked and entirely without cause."

Surveillance footage from the scene, released by police today, shows the suspect entering what appears to be the Esso at 176 Front St E. around 4:08 a.m. on Thursday, June 13.

Without hesitation, the suspect jumps over the counter and brandishes a knife.

Toronto Police are looking for a suspect caught on camera during a violent gas station robbery near Front and Sherbourne Streets earlier this month. https://t.co/tctKfNfEps

Police say that the suspect told the gas station employee to open the cash register and lie down on the floor. The employee is said to have immediately complied.

The suspect then emptied the cash register of all bills and coins before turning back to the gas station attendant — who was still lying prone on the floor — and, for no apparent reason, stomped on his head multiple times, rendering him unconscious.

He fled the same way he came, with a leap over the counter, and fled the area. Once located, the employee was taken to hospital with a fractured skull and orbital bone as well as cuts and bruising to his face.

That poor gas station attendant. This is horrible😥

Police are appealing to the public for help in identifying the suspect, who is described as black man in his mid 20s, between 5'8" and 5'10" tall, with a muscular build.

He was wearing a baseball hat and a dark hoodie pulled tight around his face at the time of the robbery, as well as black gloves and black Converse Chuck Taylor sneakers.

Anyone with information is asked to call Toronto Police at 416-808-7350 or submit their tips anonymously via Crime Stoppers.

by Lauren O'Neil via blogTO
Posted by Arun Augustin at 11:06 AM