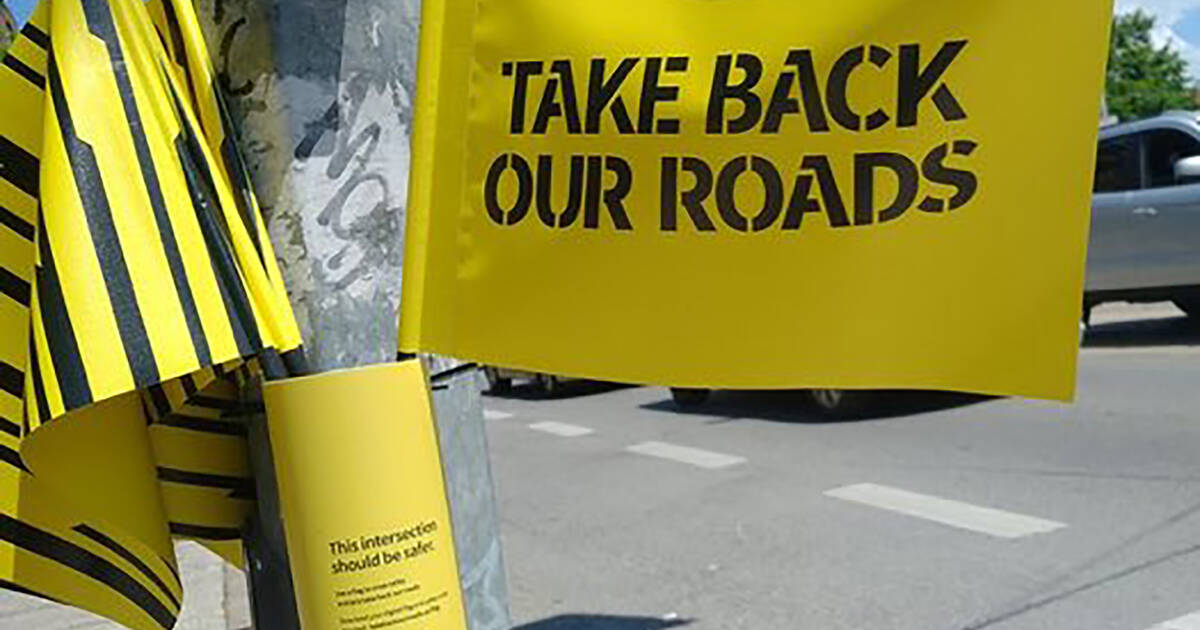 City officials asked an insurance company to remove yellow flags they placed at nine intersections across Toronto  — without permission — for pedestrians to hold while crossing the street.

These flags were part of Aviva Canada’s Take Back Our Roads campaign, the first step of a $5-million initiative, which was not approved by the City of Toronto.

The company placed their yellow flags on city-owned poles at dangerous intersections and encouraged pedestrians to hold them while crossing the street.

The endeavour was aimed at improving roads safer, but it was branded.

It was an advertisement? Taking advantage of increased pedestrian deaths to draw attention to your insurance product? https://t.co/QK2gRzewCY

“We support Aviva Canada’s efforts in enhancing road safety in Toronto, but permission was not sought from the City of Toronto,” a city official said yesterday.

Road safety is an ongoing issue in Toronto. Last week, Mayor John Tory announced that the city was reducing the speed limit on 50 streets.

But, there is little evidence the yellow flag strategy is effective, city spokesperson Brad Ross said. The Department of Transportation in Seattle cancelled a similar initiative because there was insignificant impact.

Aviva Canada responded by stating that their venture was about “starting a conversation,” but they “absolutely respect the guidance from the City of Toronto and their request to remove the flags.”

9. Why does this make me angry

Because if these ‘tech enabled flags’ have anything to do with data collection, they will inherently undercount pedestrian activity at the intersection. pic.twitter.com/JnTZJZcmh0

Take Back Our Roads is a social impact initiative, part of a long-term investment in “data-driven solutions,” according to the company's press release. Aviva was using their data on insurance casualties to identify dangerous roads in the city.

Gil Meslin, a Toronto urban planner, took issue with the flags because they were "blaming the victim."

"The problem here is not pedestrian visibility," he said, standing at one of the intersections the flags were placed. "It is drivers who race through yellows and run red lights to make it down the road to the next red light 30 seconds sooner."

Road safety is an enduring issue in Toronto, but Aviva’s initiative might not be the solution.

by Hannah Alberga via blogTO
Posted by Arun Augustin at 8:01 AM