A mysterious delivery robot named Geoffrey is being tested in Toronto 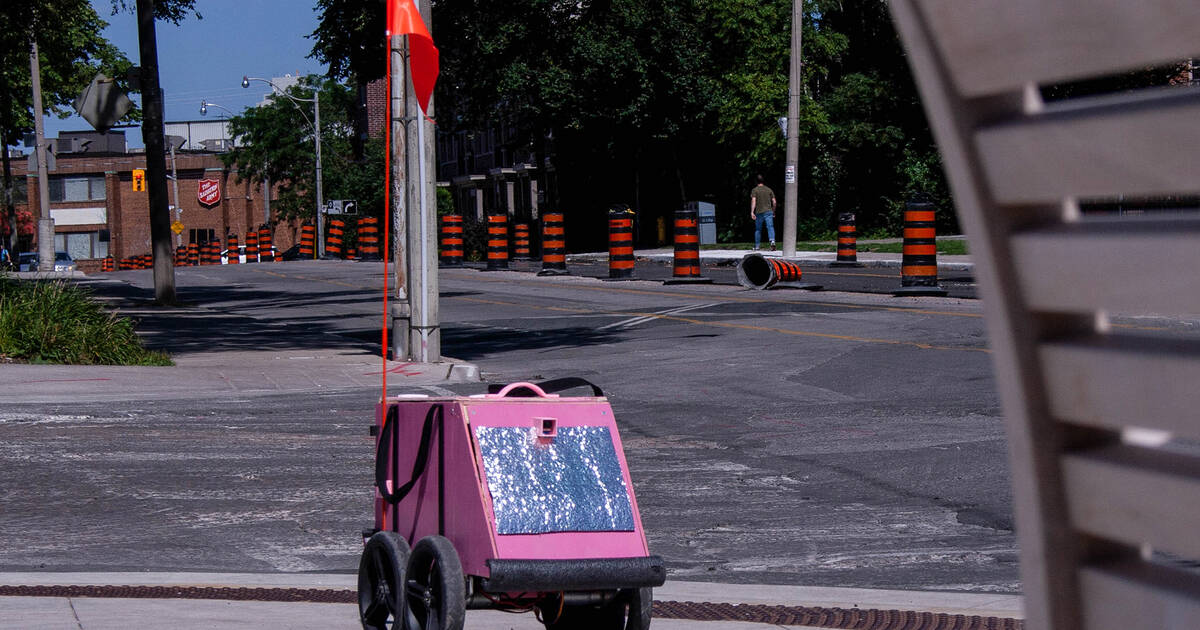 The future of food delivery is cute, pink and weighs roughly the same as a domestic house cat.

His name is Geoffrey, and he's not really a "he" given that (most) robots don't have genders — though you'd be forgiven for anthropomorphizing the thing. I mean, it has hearts for eyes.

Named after computer scientist Geoffrey "the godfather of machine learning" Hinton, robot Geoffrey has been turning heads in downtown Toronto over the past few months simply by traversing city sidewalks.

Photos and video footage of the pink bot have been popping up all summer on social media networks alongside questions about what the heck it is, and who controls its actions.

One YouTuber spent nearly seven minutes chasing what he called the "self-driving mystery box" up Yonge Street without ever getting an answer. Instead, he himself was accused by passersby of controlling the robot.

He wasn't controlling Geoffrey, but someone else was — from inside the office of a Toronto tech startup called Tiny Mile.

Geoffrey the A.I. delivery bot passed me the other day near Adelaide St W & Peter St in Toronto pic.twitter.com/rsBp7ViiSO

"If you swap a car for a little robot, it's a huge win for society."

The goal is to eventually swap many cars for many little robots that can deliver food within a one-mile range in just 15 minutes by travelling at speeds of up to 6 km/h.

Not only would such a system reduce C02 emissions, it would allow people who normally couldn't afford restaurant delivery to access pre-made food and spend their time in other ways.

"Only the top 10 per cent in Toronto is able to afford delivery," says Tartavull. "The poorest people are the ones who will spend the most time cooking at home... if you were able to make delivery available for 50 cents, that would change things enormously."

Restaurants, too, would stand to benefit from using bots to deliver food locally instead of relying on delivery apps like Uber Eats, which charge them a 30 per cent commission.

Even current delivery drivers could pivot to a safer, more comfortable job: Operating robots from home using something akin to a video game system for true contactless service.

"It's very hard for me to imagine a future in which we don't have these robots," says Tartavull. "Four years ago we didn't have Uber Eats. I didn't have a smartphone in high school... and I'm not even that old!" 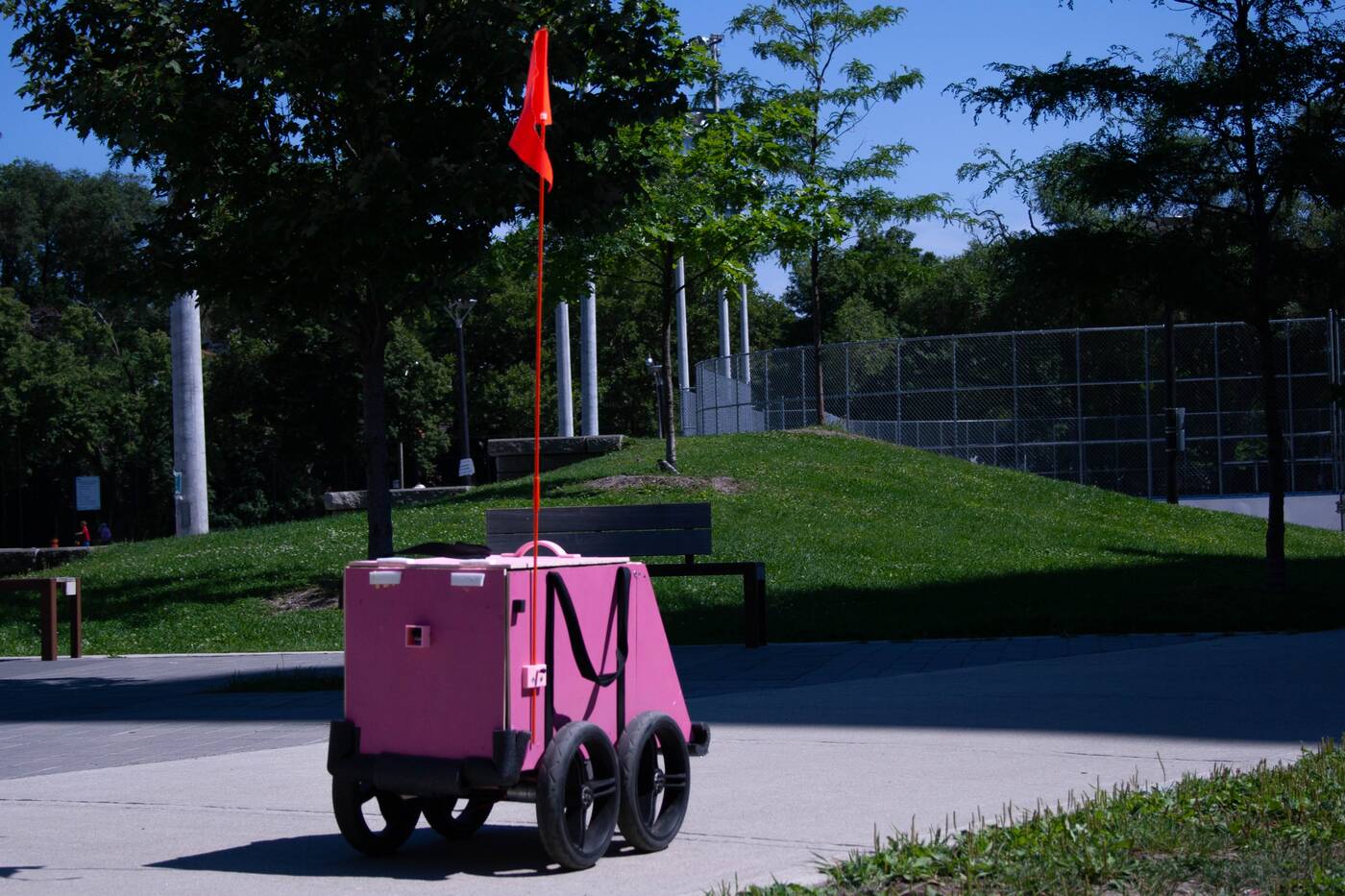 While the CEO of Tiny Mile believes that ground-based, remote-controlled delivery robots are inevitable, he also admits that bringing the system to scale will be difficult.

"We've been working on it for more than a year and we still have only a couple of robots on the streets," says Tartavull. "We're just getting started."

At present, there are two or three Geoffrey prototypes cruising around downtown Toronto on any given day, each of them controlled by a Tiny Mile employee through a proprietary software application.

The remote pilots rely on a GPS system and five wide-angle cameras stationed around the robot to guide them through downtown Toronto.

Tartavull likens the experience to "a hard video game" with a full screen video feed, a little map that shows you where to drive, and an Xbox controller joystick.

On the rare occasion that Geoffrey gets stuck or falls over, humans seem happy to help.

When asked about fears of vandalism or theft, Tartavull said his team has actually experienced the opposite.

"People in Toronto are so nice," he said. "A few times the robot has fallen on the curb and people immediately went and put it back."

Weighing just 10 lbs with a 12-hour battery life, Geoffrey and his intended uses are as impressive as he is adorable — and that's intentional. 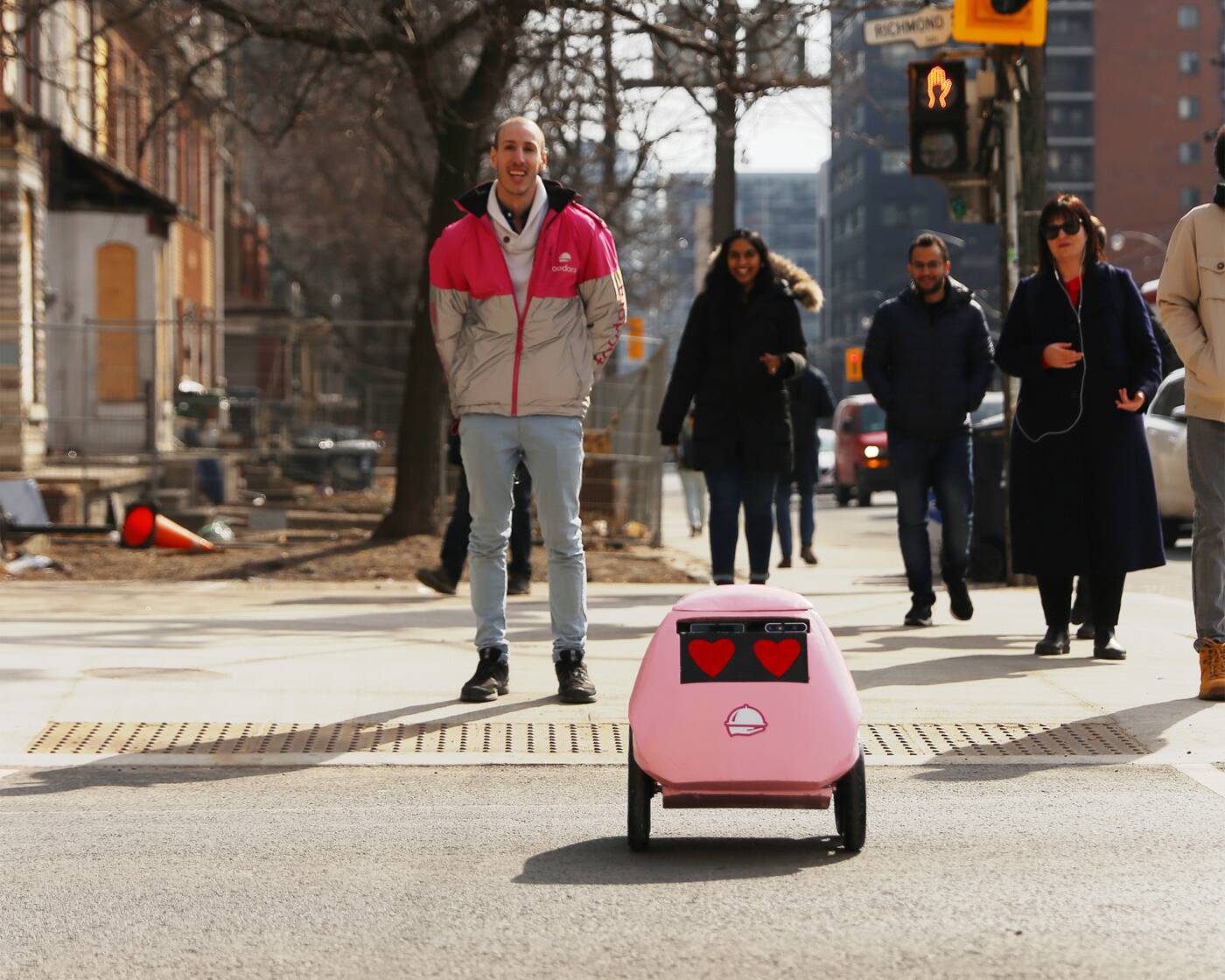 A whole team of Geoffreys were commissioned for use in Toronto by Foodora last spring, before the company pulled out of Canada.  Image via GlobeNewswire.

"The prototype now is pretty boxy," says Tartavull of the delivery robot, "but the original one is rounded. Some people are afraid of robots, so we tried to make something with sort of baby features — everything people find really cute."

The rounded model he refers to is the one seen in most press materials for Geoffrey, while the boxy model is what people have been spotting around downtown Toronto this summer.

Tartavull said this team devised the boxier, less polished model to test out new features such as a microphone, speaker and screen that can display text for consumers.

Once new features are developed, they can be integrated into the cuter model... though it seems as though most people find the boxy model pretty cute too — or at least interesting enough to stop in their tracks and gawk at.

"When I drive this with a joystick, everybody is taking pictures," said Tartavull, noting that more than 50 per cent of people who walk by Geoffrey stop to look and take photos.

"I made the very first version in my little apartment and I took it for a ride around my block and everyone who was walking just stopped... they stopped talking and turned around to look."

It's hard to say why, in a city where truly wild and unusual things happen on the streets all the time, people have become so obsessed with a little pink robot.

Tartavull thinks futurism and science fiction have something to do with it.

"We've been talking about robots in society helping us for decades," he says. "This is something they can touch and see… the realization of that dream."