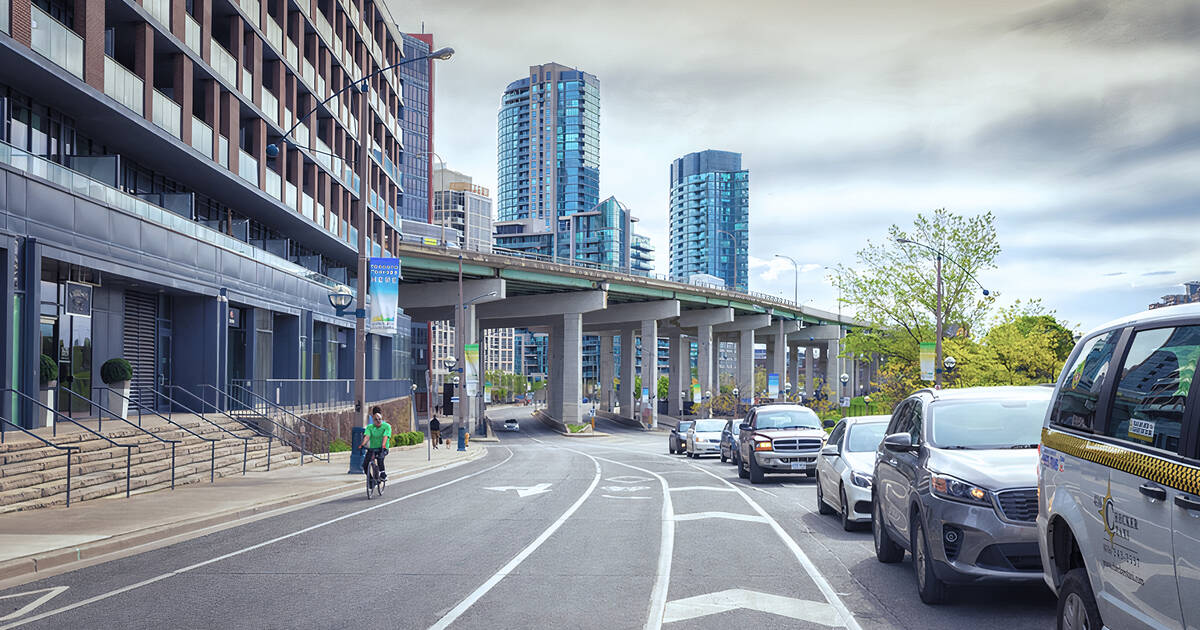 A proposal facing Toronto's Planning and Housing Committee on Tuesday could see the city moving to make major condo developers help out with the ongoing affordable housing crisis instead of making matters worse.

Residents have long bemoaned watching swaths of their neighbourhoods — including some of their favourite institutions — be destroyed for uninspired condo towers that very few locals could ever actually afford to live in, and the rate at which this type of housing is going up in Toronto continues to astound.

There have been calls for more affordable housing in Canada's least affordable city for some time now, to little avail.

But the proposal from Chief Planner Gregg Lintern would mean as much as 10 per cent of the units in new condos erected in some parts of the city would have to be made into affordable rentals or owned homes.

Buildings of a certain size in most of downtown, along with North Toronto, portions of Scarborough and other boroughs, would need to meet the requirement.

In other parts of the city, such as Etobicoke and North York, this would drop to five per cent. For purpose-built rental buildings, it would be three per cent.

The units allocated as affordable housing would also have to stay that way for 99 years, a huge win for tenants struggling to keep up with the more than $2,o00 it costs to rent a one-bedroom apartment in the city, on average — a figure that is actually considered low thanks to a huge price dip from the health crisis and restrictions on short-term rentals.

"The proposed draft amendments reinforce the City's policy objectives for providing a full range of housing across the city and supports the plan to ensure new housing opportunities are targeted to low and moderate-income households and affordability is provided long-term," the proposal reads.

"Inclusionary Zoning is a land use planning tool that enables municipalities to require new development to include affordable housing [and] will be a key policy tool to help the City achieve its target of approving 40,000 affordable rental homes and 4,000 new affordable ownership homes by 2030."

I met residents and advocates today to discuss the homelessness crisis in Toronto.

They agree - we need immediate short term supports for those experiencing homelessness, while also a commitment to work towards long term goals such as building more affordable housing! #topoli https://t.co/kHH8L7QVnY

Mayor John Tory recently asked the federal and provincial governments to help fund thousands more affordable housing units in the city, in part to help the growing homeless population, a demographic that has become harder to ignore in recent months.

There is also Canada's new $1 billion Rapid Housing initiative, which was announced just this week, that will help to build new affordable modular housing in cities across the country, as well as convert existing buildings into affordable units.

But why not ask wealthy corporations that are rapidly changing the face of the city (to many residents' detriment) to share some of the responsibility, too?

All Canadians deserve a safe and affordable place to call home. Today, Minister @HonAhmedHussen announced our government's new #RapidHousing Initiative, that will quickly create new affordable housing across the country, including here in Toronto. For more:⬇️ #ScarbTO https://t.co/JP4H523Ntk

And hopefully that's something that Lintern's Inclusionary Zone plan would do.

Coupled with other motions like a new vacant home tax, middle- and low-income people struggling to get by in notoriously pricey Toronto may soon find suitable housing a little more within their reach.