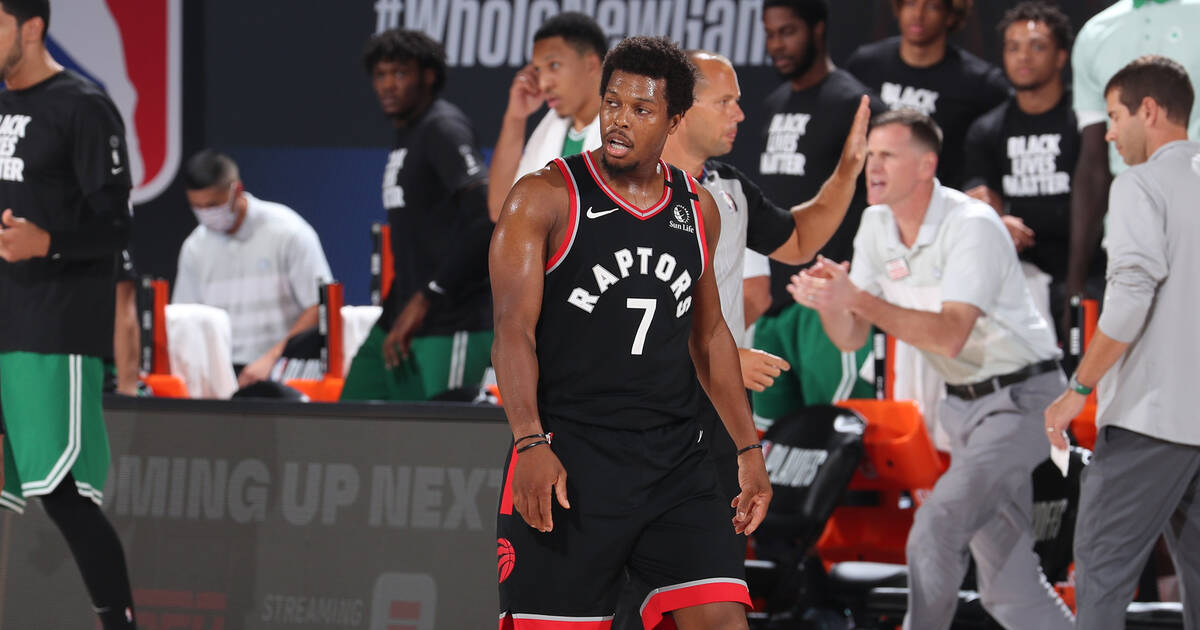 Toronto is reeling today in the wake of another intense NBA Playoffs game that really could have gone either way before the Raptors clinched a win in their typical dramatic, never-say-die fashion.

With a 125-122 victory against the Boston Celtics in double-overtime on Wednesday, the defending NBA champions will live to fight another day.

Kyle Lowry goes off for 33 PTS (6 3PM) and sinks the game-clinching jumper as the defending champion @Raptors win in 2OT to FORCE A GAME 7 Friday at 9:00pm/et on TNT! #NBAPlayoffs

Down by three in the series, Toronto's otherwise solid season would have come to an abrupt end last night had Boston won, crushing all hopes of a back-to-back championship run for Canada's only NBA team.

It was a nail-biter, to say the least — one that many are calling "the best game in the bubble" to date.

Fortunately for our hearts, the Raptors managed to forced a Game 7 in the Eastern Conference semifinals.

They'll face off against the Celtics inside the NBA bubble at Disney World this Friday and, if successful, will go on to play the Miami Heat in the Eastern Conference finals.

It's hard to say how Game 7 will go, but recent history suggests that the Raptors won't lose because they can't lose.

If you don’t love the heart of the @Raptors we need to have a talk. Everything you want in a defending champion who lost their best player in free agency. Incredible.

Many are predicting that Toronto will come out ahead on Friday with their teamwork and grit.

They're also placing a lot of faith — and rightfully so — in six-time NBA All-Star Kyle Lowry, who logged 33 points, eight rebounds and six assists during last night's game to help even the series.

Lowry, 34, played a whopping 53 minutes on Wednesday night — a fact that he laughed off when it was brought up by EPSN.

"Damn, that's what it was?" he said in a post-game scrum of his 53-minute tenure on the court. "Ride 'em like Seabiscuit!"

The veteran Raptor had some monster plays, as always, but so too did teammates Norman Powell (23 points), Fred VanVleet (21 points), OG Anunoby (13 points), Serge Ibaka (13 points) and Pascal Siakam (12 points.)

As they've proven time and again, the Raptors don't need one star to carry the team — even if fans get weirdly obsessed with that kind of thing.

Lowry does play like one, though, as fans and experts were pointing out in spades after last night's gobsmacking victory

It's not only Toronto fans and analysts loving on Lowry right now, either — dozens of fellow NBA stars weighed in on Twitter last night to show love for the Philadelphia native, who joined the Raptors in 2012.

From Dwyane Wade exclaiming "Kyle Lowry!!!!" to Terrence Ross tweeting "My mf'n vet. K Low put em away," there was no shortage of reverence for the point guard circulating last night.

Said Joel Embiid: "Kyle Lowry is not appreciated as he should be. #Winner."

Some say it might be time to start considering a Lowry statue outside Toronto's Scotiabank Arena, as he is, and I quote hundreds, "the best Raptor" of all time.

"[Lowry] is an elite clutch performer, always comes up with the big play at the biggest time, a steal, a bucket, takes a charge," wrote another. "Best Raptor ever!"

Raptors coach Nick Nurse praised Lowry's game last night, but only as much as he gave kudos to every other player on the team.

"That's what the tough players do and he is, man. He is a great one. He's fun to watch. He's the ultimate competitor. Toughness and he steps into it. He's not afraid of the moment. He made some big ones for sure. He played great."