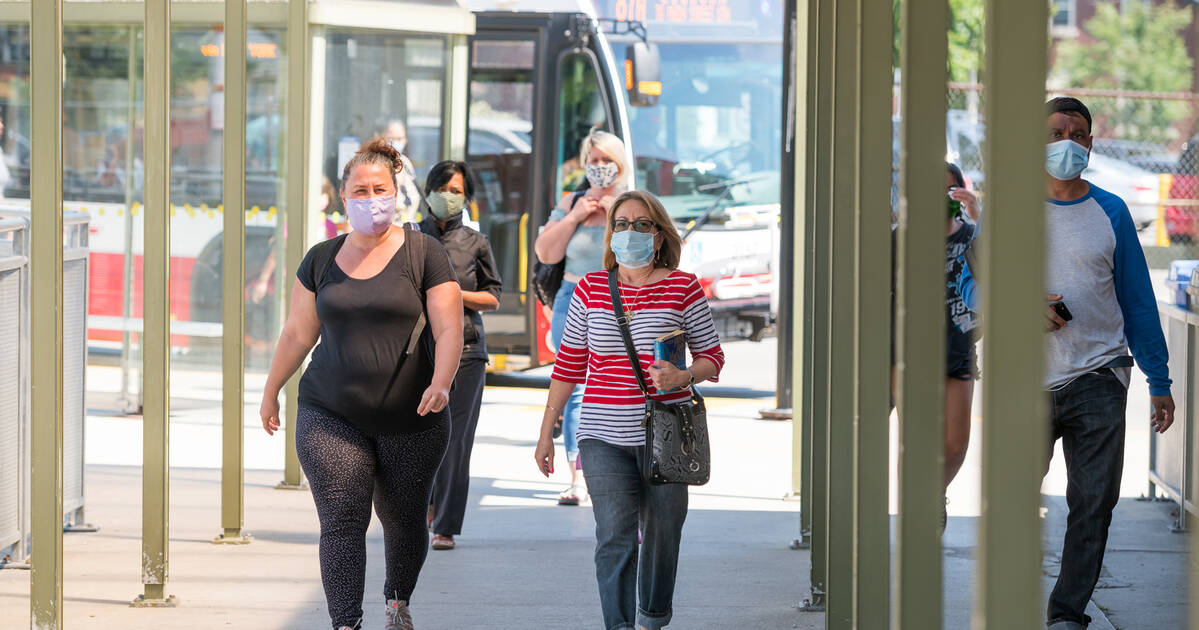 The TTC moves approximately 1.7 million people on a typical weekday and while that number dropped dramatically during the pandemic, ridership is on the rise again and this means the TTC Customer Service agents are as busy as ever.

They are fielding questions, complaints and everything in between from 7 a.m. to 10 p.m. every single day.

If you've ever looked at the responses on Twitter you'll notice that each tweet has a signature, indicating that a real live human responded.

Hi, there are fare inspectors working, yes. They should certainly be wearing masks, properly. That is a rule. If you wish to make a complaint about an incident, you can do so here: https://t.co/6MmfzMu0Pb ^KJ

So what's it like being the human behind @TTChelps? blogTO spoke with Dustin Manley, who's been a senior customer service representative since February 2019, to find out.

"On a typical day we get 150 contacts from the public per day," he said, explaining that they didn't notice a decrease in volume when the pandemic hit.

That roughly works out to almost 55,000 complaints and questions a year but it's not like there's a huge team of customer service people to handle those.

There are 25 people on the entire team to handle the Twitter account, the phone line and investigating complaints.

Hell of a time to have everyone crowded on the subway @TTChelps. Hundreds of people on the platform after you went out of service at woodbine. Next subway in 12min? I’d like a refund for the one stop ride, plz 🙄

"It's not the easiest job and it can get a bit daunting when there's a shut down on line two during rush hour and it seems like you have all of Toronto tweeting at you," said Manely.

"Pre-pandemic there were a lot of the questions regarding service delays, like buses not arriving at schedule time," Manley said.

The most frequent question is about why there are always delays on line one approaching Lawrence Station.

"There are 65 trains operating on line one," explained Manley. "As they approached their terminal station at Finch they approach Finch faster than they can be redirected."

@TTChelps service stopped for the night but no announcement was made, you have a bunch of people sitting on an out of service train waiting for it to move at young

Another common complaint is about weekend closures.

"On a typical weekday night [the TTC] only has 2.5 hours to do track repairs and other upgrades. So the weekend upgrades are necessary but we do understand it's an inconvenience," added Manley.

Since the pandemic, Manley and his colleague have noticed more inquiries and complaints around if there are enough vehicles on the road.

And the TTC has been trying to address this. According to Manley they've designated 150 vehicles to "run as directed", which means that when they get a lot of complaints about crowding or wait times on a specific route they can call into transit control and see if they can reallocate a vehicle to add extra service to that route.

SERIOUS QUESTION
@takethettc @TTChelps is covid over? How is it ALLOWED to have a crowded bus when outdoor social gatherings cannot exceed 10ppl? @CP24 .... shouldn’t there be a limit of how many ppl can get on a bus? This is ridiculous pic.twitter.com/8T2hjZI2kN

There's also been a growing number of complaints about mask wearing.

"We're working hard to keep informing customers on the importance of wearing masks. We share the concerns with our team and we're doing as much as we can to inform our riders about how to wear a mask," Manley told blogTO.

"We've done internal audits compliance has been growing over 90 per cent and it's great that the people of Toronto have been stepping up and we're hoping that this continues to pick up."

I stand by my statement yesterday. YOUR NOSE MUST BE IN YOUR MASK TO WORK. @TTChelps this is what we’re saying. If we don’t feel safe even around your drivers. What does that tell you?? pic.twitter.com/5tuz6B0tGQ

But regardless of how many times Manley or someone on the team has to answer a question or respond to a similar complaint, he told blogTO, it's rarely frustrating.

"I've been able to get creative and put together Twitter threads to answer common questions. It's also a good opportunity to answer as many customers as we can. If people bring a concern to us we try and address it," he said.

This can be in the form of road suggestions, directing customers to personnel who can handle the issue or even coordinating with transit control for real-time updates.

"We know it's frustrating because we take the TTC. We keep that in mind and we understand they're not expressing frustration at us," said Manley, who has lived in Toronto for 10 years and has never owned a car.

"We do care. We want to make [people's] day a little bit better and we do our best to run things smoothly. We look forward to helping the city even during this trying time."

Hi Kirsten, I'm sorry to hear this. We have over 100 shuttle buses available servicing the 4 affected stations. Service on the University/Spadina side of Line 1 is fully operational and there are bus and streetcar transfers available from the Yonge side of Line 1. ^DM

And while Manley has found ways to make dealing with the onslaught of questions and complaints bearable he told blogTO that it's the compliments that really make the job worthwhile.

"The compliments do mean a lot to us. That sticks with you," he said sharing a story about a compliment he received earlier this year.

"I remember this one compliment from a physician. It said 'I wanted to thank the bus driver whose quick thinking saved this man's life.' The customer went into cardiac arrest and [the bus driver] got this man to hospital and saved their life.

They're still around today because of that driver. That just blew me away. It really made it all worthwhile. I thought this is why I work with the TTC to help people out and make sure these stories are told," Manley told blogTO.

Hi Kaif, unfortunately those buses are in traffic congestion like the other vehicles ^DM

He also recounted a more recent event when he and another TTC helps member managed to reunite a rider with their phone.

"That was team work," he said. "Things like that mean a lot; it's good to make a difference."

It was recently Manely's last day on the job and while he told blogTO his departure is bittersweet, he wanted to make sure that the public knows that everyone on the team is truly doing their best to serve TTC riders.

"I just want people to know that we're people, we ride the TTC too, and sometimes when there are issues or delays those affect us but we work together to get people where they need to go as efficiently as possible. We're human. We care about you."