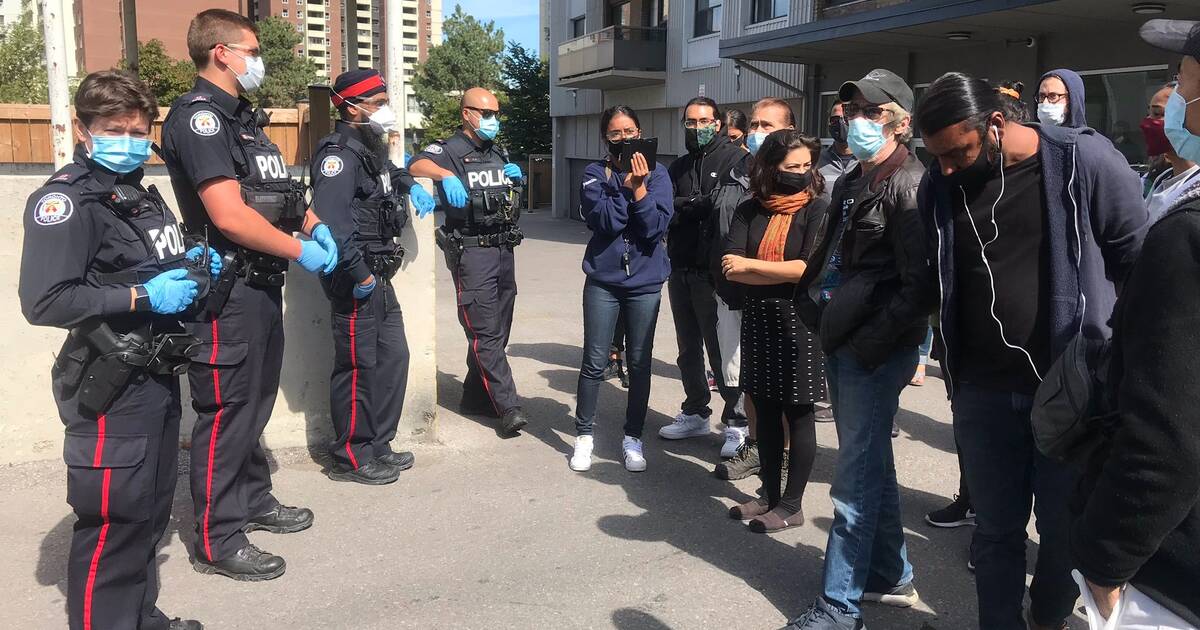 Toronto protesters engaged in a tense standoff with police outside the apartment building at 108 Goodwood Park Court this afternoon and successfully prevented a resident from being evicted.

Tenant advocates and neighbours of the resident facing eviction showed up to the East York location early Monday afternoon in preparation for police and sheriff presence, and officers arrived on the scene shortly after to carry out the eviction.

Sheriffs are here at 108 Goodwood Park to evict a tenant. No one should lose their homes during a pandemic and the neighbours here are organized and committed to making sure that won’t happen. There will be #NoCovidEvictions here! IG Live here: https://t.co/oJxBRAN8TA pic.twitter.com/MHdTk7rXXp

Upon their arrival, advocates communicated with police that they believe the tenant should not be facing eviction, since she is prepared to pay rent, she just simply cannot afford to retroactively pay for many months all at once and is instead requesting a repayment plan that is within her means.

Protestors also explained to police that they believe evictions should not be enforced throughout the pandemic, pointing to widespread encampments throughout the city as evidence that there is nowhere to go when people lose their homes in these times.

Cops are here. Tenants are explaining that COVID evictions are not right and we will not stand for it. This a landlord and tenant matter, and the police should leave. #NoCovidEvictions pic.twitter.com/fQkhpadSaM

Police, meanwhile, simply stated that they had spoken to the sheriff and were informed that there was an expidited order to evict the tenant.

But while protestors told police they believed there was no reason for them to be there as this was a landlord/tenant matter, additional officers arrived on the scene.

In total, according to Keep Your Rent Toronto — an organization focused on preventing COVID evictions — 14 police officers came to Goodwood Park to try and enforce the eviction.

Toronto Police Services are under municipal jurisdiction. What’s going on here, @JohnTory ? These are YOUR COPS, not the province’s. https://t.co/eFrZXOgTqz

Advocates also pointed out that Mayor John Tory has previously said that Toronto police do not actively enforce evictions unless there is a public safety concern, which is confusing considering the number of officers that showed up to help evict one single tenant.

.@JohnTory said that Toronto police don’t enforce evictions — so why are they here in Goodwood Park right now trying to do just that??? #NoCovidEvictions pic.twitter.com/jvsugQfZeJ

But despite the number of police on the scene, advocates formed a human blockade to prevent them from being able to enforce the eviction.

And when it became clear they weren't going anywhere, officers eventually left without accomplishing their goal.

Tenants and supporters successfully organized to prevent evictions in Goodwood Park today! No one will lose their homes under our watch. We will continue to defend each other. #NoCovisEvictions pic.twitter.com/qwtm4FpCf3

Protestors then celebrated and told police not to return to their neighbourhood.

Tenants of Goodwood Park celebrate and warn the sherrifs not to return to their neighbourhood as the enforcers of #COVID19 evictions leave having failed to carry out the eviction today.@Peoples_Defence #NoCovidEvictions pic.twitter.com/JuuPdgyzYO

"Tenants and supporters successfully stopped evictions in Goodwood Park today; preventing an indigenous sister with mental and physical health concerns from being thrown in the street," wrote People's Defence, an organization of poor and working people fighting evictions in Toronto, on Instagram.

"12 squad cars with armed cops showed up to enforce the eviction. It is not under their jurisdiction to enforce evictions- as stated by @johntory himself. When it became clear that tenants were bold in their demand, both sheriffs and cops left the neighborhood," they continued.