You can explore this incredible glowing tunnel in Ontario 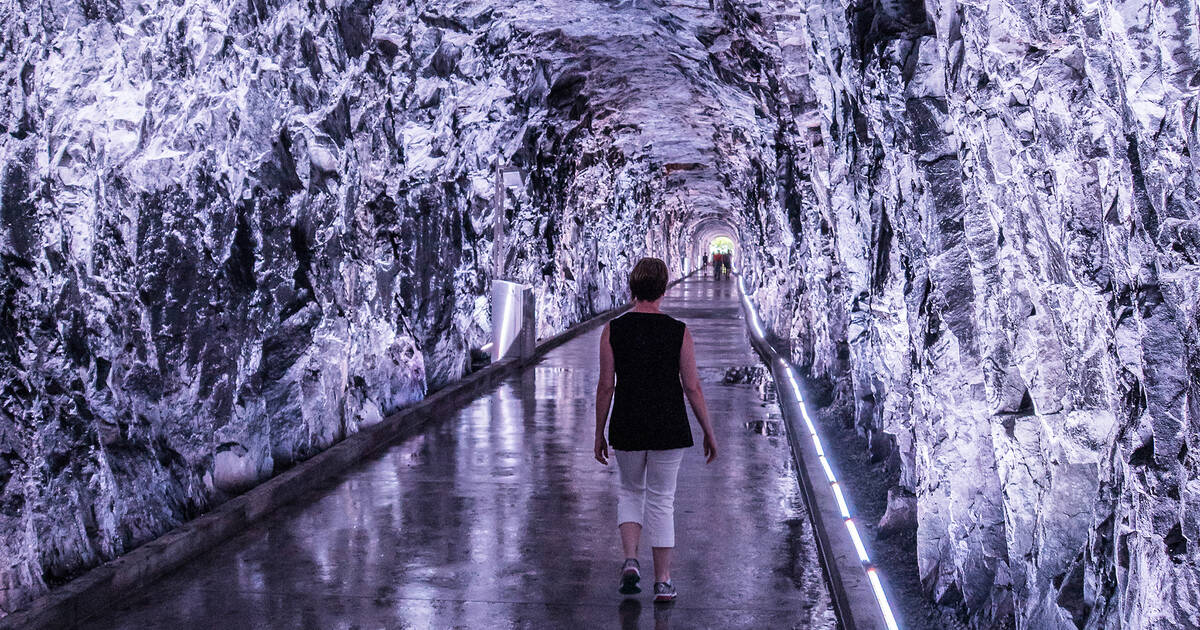 There's something profoundly alluring about an abandoned tunnel. Upon entering, you can't but help but wonder about its original purpose and the history that's contained in its reinforced walls. Problem is, there are very few of these places that are safe to explore.

Fortunately, Ontario is home to one of the most remarkable tunnel destinations in North America.

The Brockville Railway Tunnel, originally built between 1854 and 1860, was the first of its kind in Canada. It actually pre-dates the country's more celebrated western tunnels laid out for the Canadian Pacific Railway. 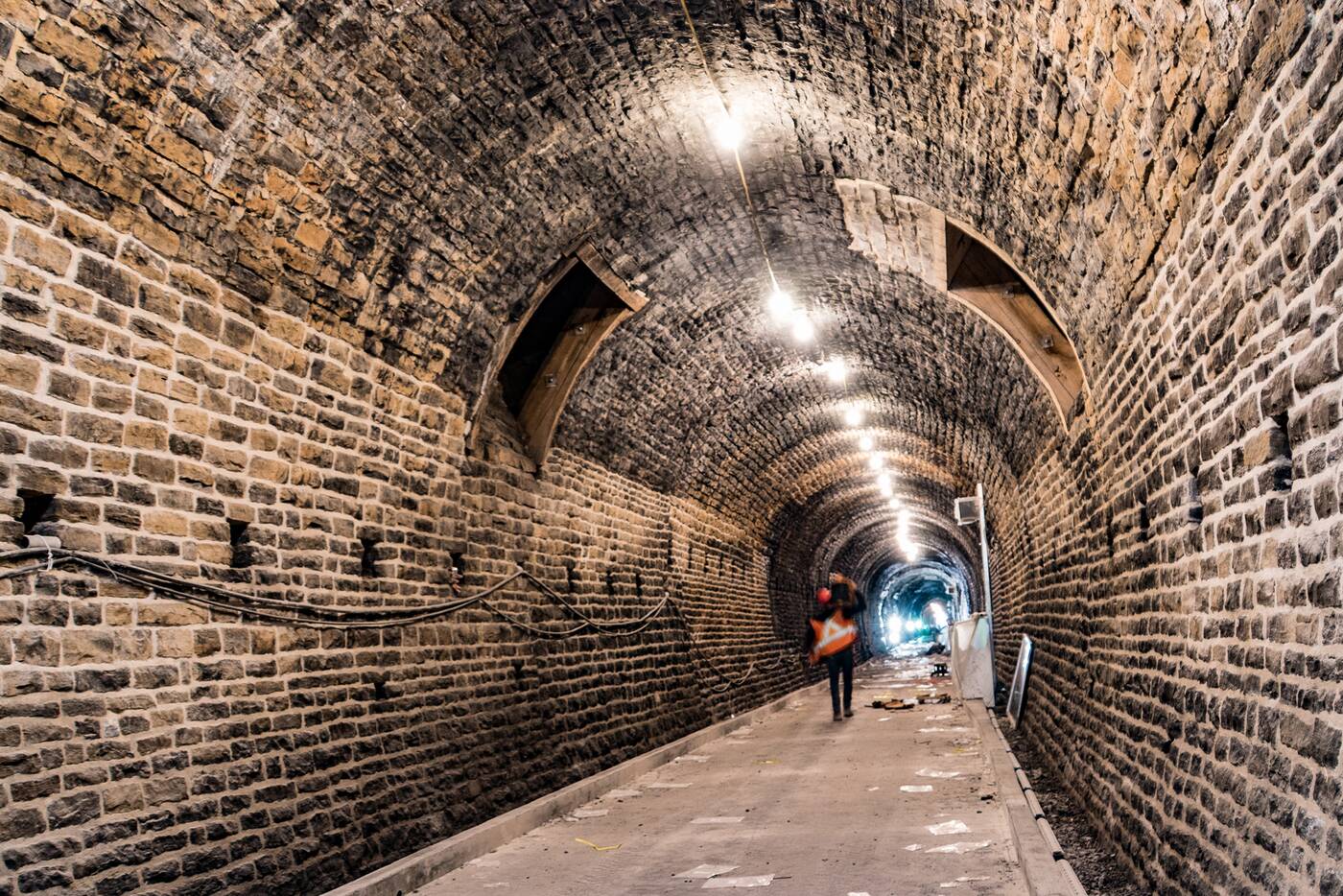 After decades of neglect and deterioration, it was miraculously restored as a pedestrian passageway that's proving a major tourist draw for the small town east of Kingston on the St. Lawrence River.

Renovation efforts commenced in August 2016, and the first stage of the tunnel officially opened in 2018. It's been a local hot spot since. 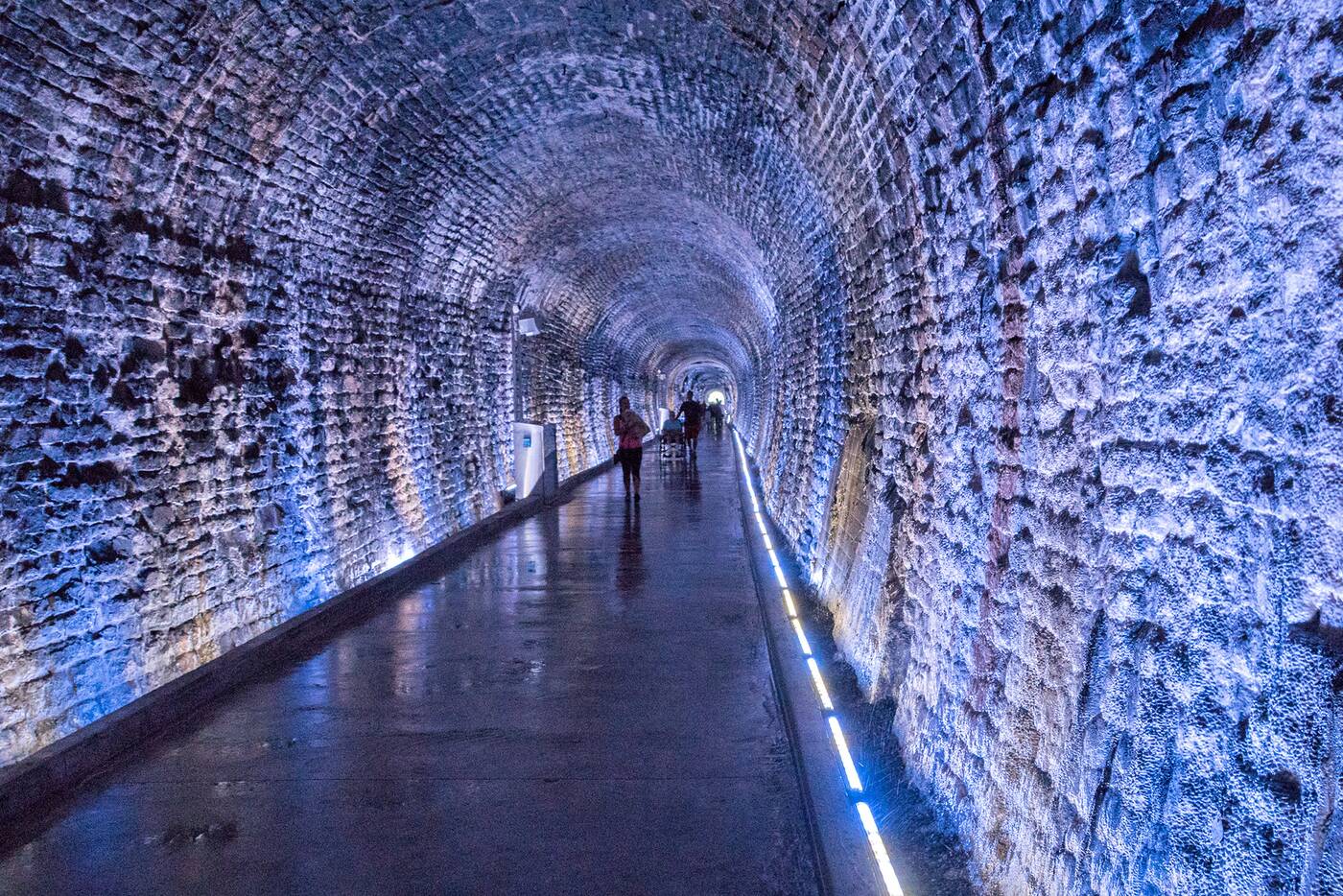 The LED lights in the tunnel rotate colours, which gives an ethereal effect. Photo by Keith Hare / Brockville Railway Tunnel.

The 525-metre passageway features a stunning LED light show that changes colours as people travel underneath downtown Brockville. The stunning rock walls are immediately reminiscent of the Stockholm subway system. 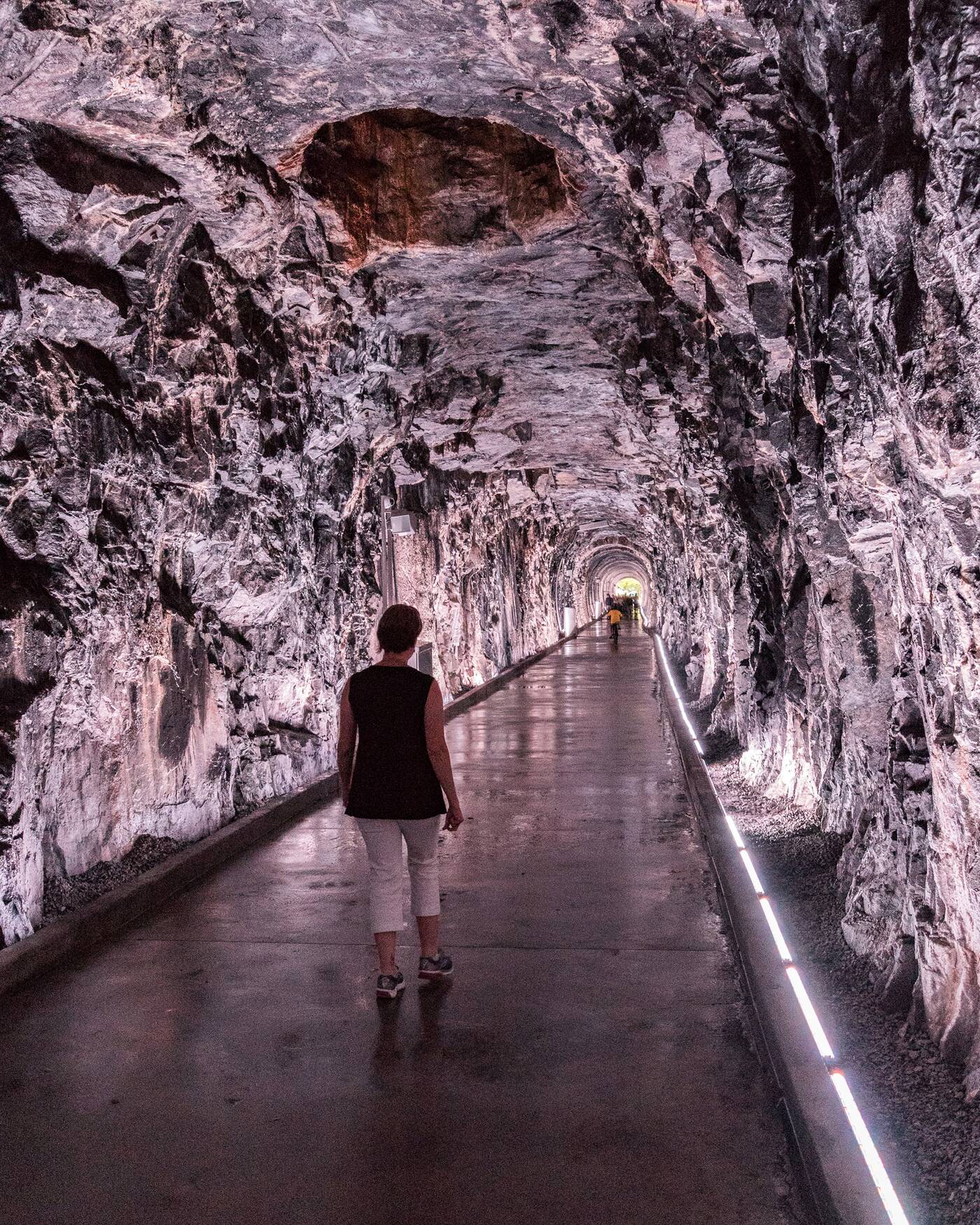 While the tunnel has a certain degree of polish thanks to the renovations, the groundwater that occasionally collects at the bottom offers amazing reflective photo opportunities. This is Instagram heaven. 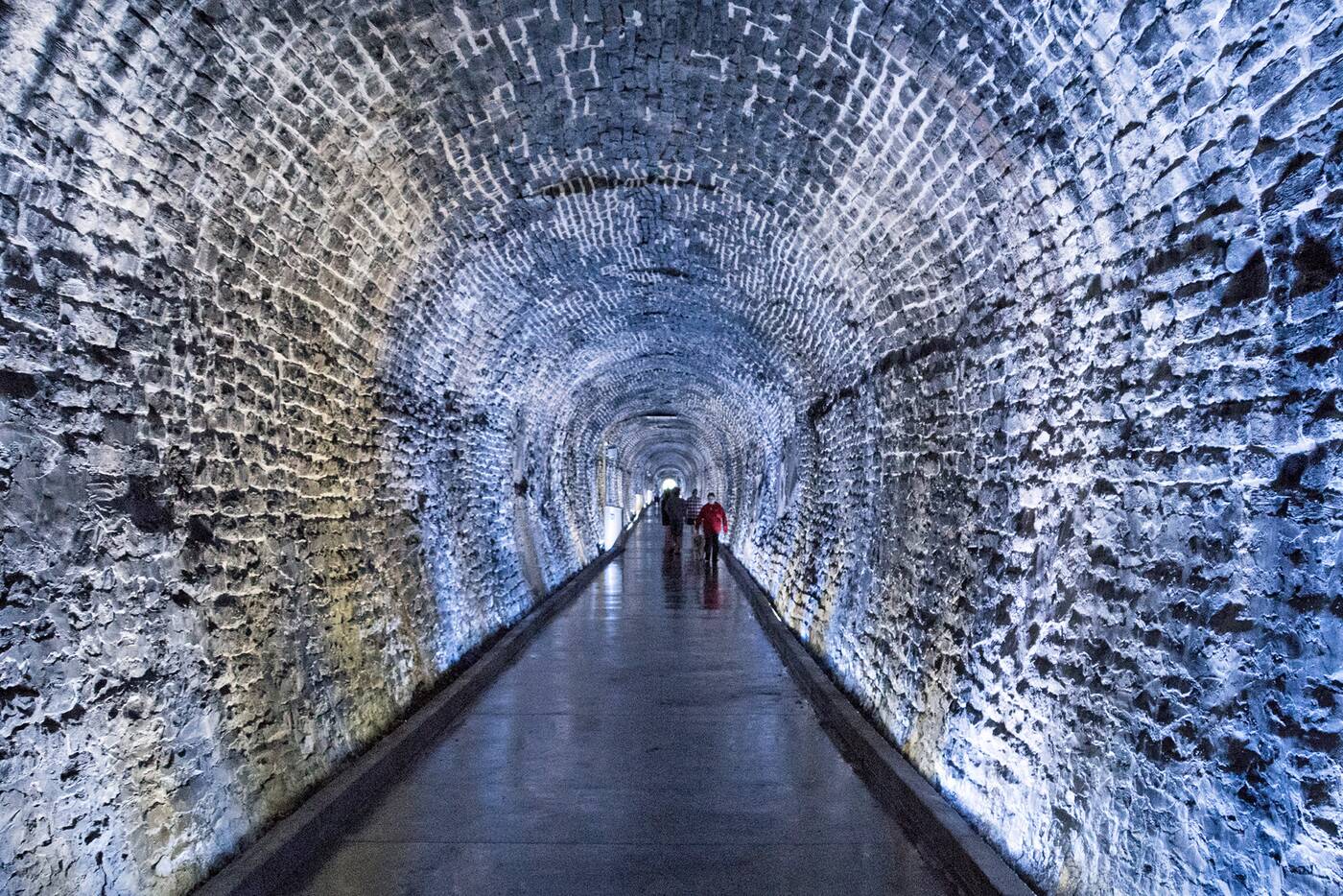 The restored tunnel is only phase one of Brockville's long term vision to create a Railway Park at the site. Future phases involve the redevelopment of the former railway Gorge property north of the tunnel and the railway lands to the west. 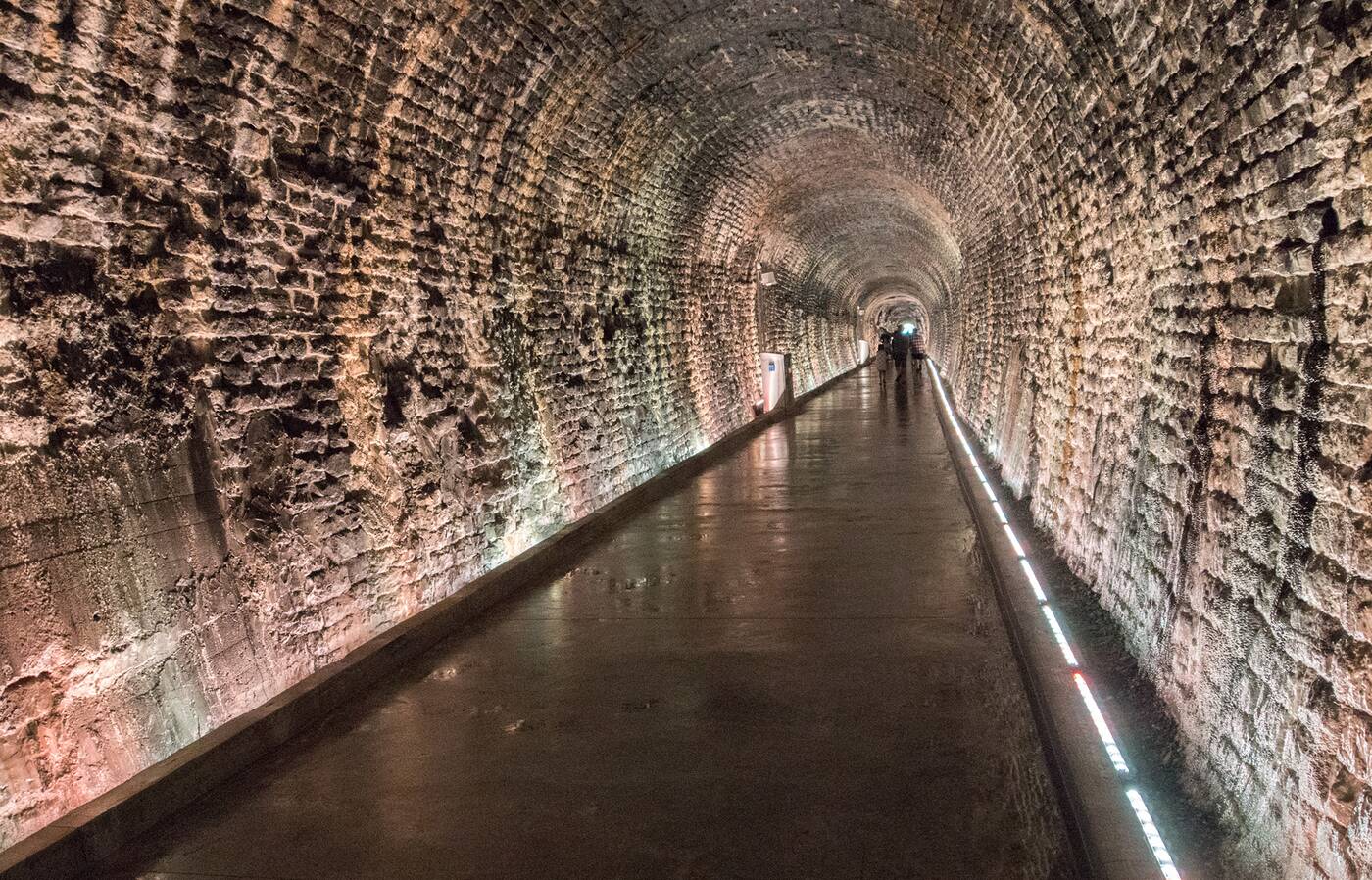 One of the other colour profiles in the LED light show at the tunnel. Photo by Keith Hare / Brockville Railway Tunnel.

Those projects will surely enhance the site, but there's no need to wait to check it out. The tunnel is definitely the centrepiece and looks spectacular.

The Brockville Tunnel is currently open daily from 9 a.m. to 9 p.m. including holidays until mid October. Face masks are mandatory and social distancing is being enforced. See the website for the full COVID-19 rules.

by Staff via blogTO
Posted by Arun Augustin at 3:48 PM