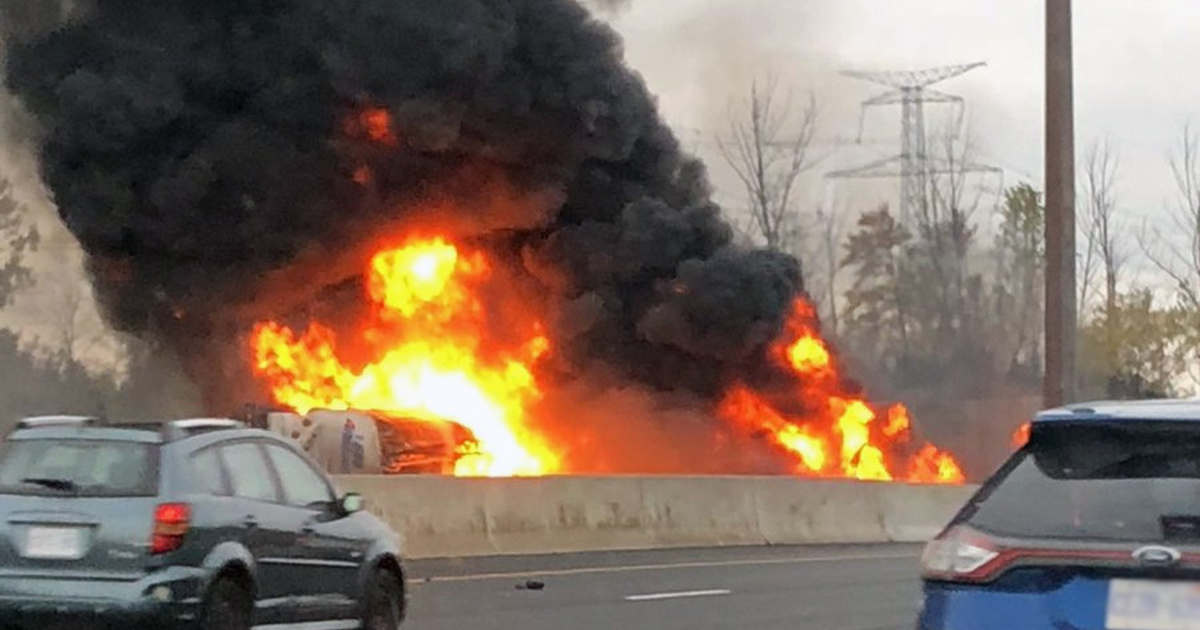 Multiple people are dead and hundreds more are sitting in traffic with their cars turned off this evening rush hour after a tanker truck burst into flames on Highway 407.

All eastbound and westbound lanes of the 407 between Keele and Dufferin are currently closed due to what Ontario Provincial Police say was a multi-vehicle collision that occurred shortly before 5 p.m.

Tanker fire on #Hwy407 between Dufferin and Bathurst https://t.co/cXmTmYjTIX

"The collision is massive. The fire is still burning," said OPP Sgt. Kerry Schmidt around 6 p.m. on Wednesday in a video shot on scene.

"The investigation will take some time while they continue to fight the fire," he said. "There are still a lot of questions that need to be answered."

Huge fire on #hwy407 blocking the road. It’s quite a thing to see, and probably very sad for someone’s family today. pic.twitter.com/sFAEqALJDe

Witnesses, all of whom are still on the 407 and unable to move, describe a terrifying scene with flames shooting up to 40 feet in the air.

Sitting 6 car lengths away from the firemen with the Jeep turned off #fire #407 #toronto pic.twitter.com/iMXQvN3Zwr

Large plumes of smoke can currently be seen above the area from all over the city.

@globalnews Fire on 407 could be seen over Thornhill neighborhoods around Dufferin and Centre Streets. pic.twitter.com/qXRNP8xp3b

From afar, the smoke can be seen wafting across the Don Valley.

407 CLOSED both directions between Keele and Dufferin due to a fuel tanker fire in the westbound lanes near Keele. If you're heading home, save your toll and take an alternate route #yyz #yyzroads pic.twitter.com/FG8GOXqkt0

Police are appealing for witnesses and advising all motorists to avoid the area if possible as firefighters work to control the situation.

by Lauren O'Neil via blogTO
Posted by Arun Augustin at 4:04 PM