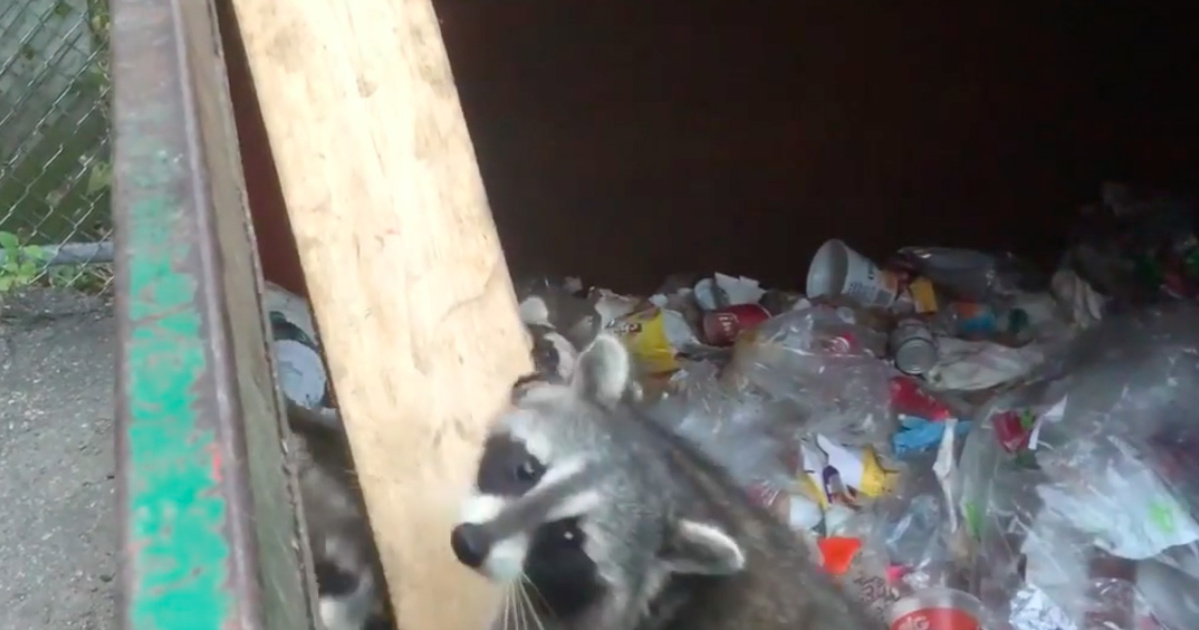 A lucky brood of fat raccoons has somehow managed to rope humankind into helping them eat lots and lots of trash, every night, with zero consequences (aside from high blood sugar, probably.)

A Toronto-based Reddit user who goes by the handle u/thecameralovesyou posted some really cute video footage late last in which six, heavy-set nightbois climb out of a dumpster by way of a wooden plank.

Filmed by her husband, a school caretaker, the clip opens with a shot of the raccoons not-so-patiently chilling inside a big green garbage bin behind a local school.

"Alright guys, you ready?" says the caretaker as he inserts a piece of plywood into the dumpster, one end resting on the ledge to serve as a ladder of sorts.

Before it's even halfway in the dumpster, multiple raccoons are standing up and reaching for the plank with their little raccoon hands.

Ramp in place, the critters scurry out of the school dumpster, one by one, and up a tall chain link fence — presumably toward wherever they live.

"You're eating too much, buddy," jokes the caretaker as an obese raccoon wobbles past the camera at one point. "Bye guys!"

My husband is a school caretaker and has to let these chunky boys out every morning. (I apologize on his behalf for the vertical video.) from r/aww

What's crucial to note here is that this wasn't a one-time rescue job. These raccoons plop into the dumpster almost every night in search of sweet, delicious trash.

"When he came to this school, he was given the run down of what needed to be done, including 'let the raccoons out of the trash'," explained the original poster about her husband's job.

It's clearly a task he enjoys, based on his cute running commentary, and one that these little trash angels might very well depend on.

u/thecameralovesyou didn't reveal where, exactly, her husband filmed the (now multiple) videos in Toronto, but did take the time to explain why our city's raccoons are so fat and bold to people on Reddit who were shocked by their size.

"Toronto raccoons are like a whole other species," she noted. "They live amongst us, like chunky wild cats."

by Lauren O'Neil via blogTO
Posted by Arun Augustin at 11:45 AM