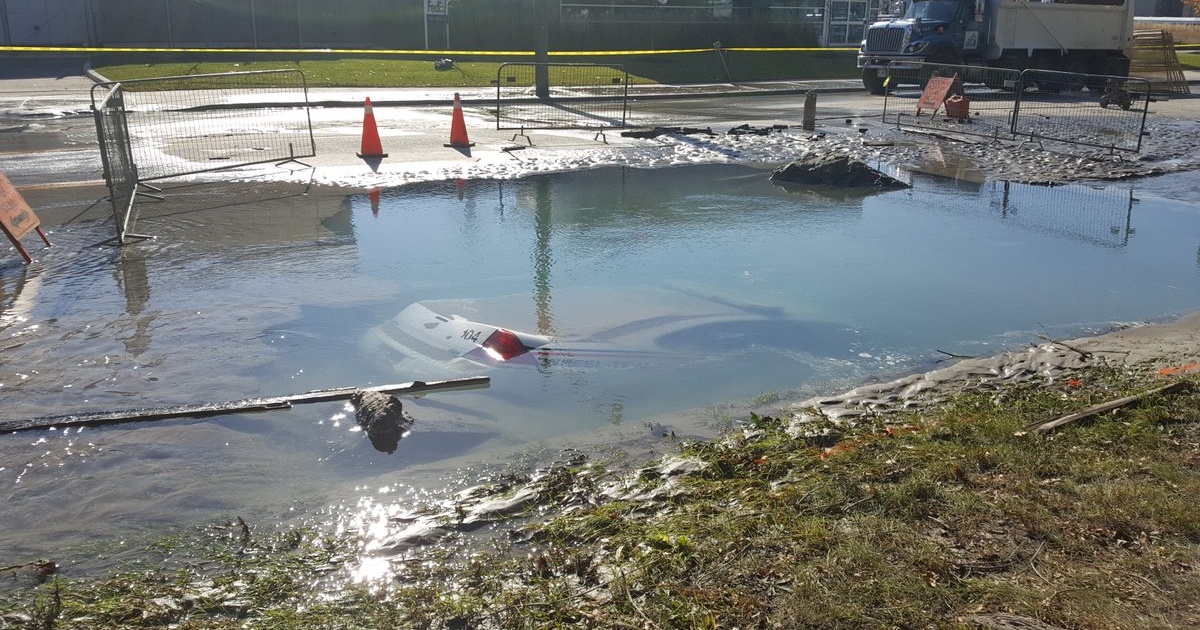 City of Toronto crews have finally managed to rescue the TTC inspector's vehicle that fell victim to a massive sinkhole on Commissioners Street early Tuesday morning — but experts say that the situation is far from isolated.

A crane was used to extract the vehicle, according to TTC spokesperson Stuart Green, but not without some challenges related to the source of the hole itself: Flooding caused by the explosion of a roughly 100-year-old water main running beneath the road.

The TTC vehicle from earlier has been rescued from r/toronto

The vehicle's driver was able to escape without injury long before it was fully submerged—a process that's said to have taken a few hours. The car is now being assessed to determine its condition, but, as Green jokes, "we have it sitting in rice."

Longer than expected bath time. Once it's determined safe and confirmed the car is not sitting on a gas line, for example, we'll haul it out and towel it off. Its tires are going to be all wrinkled! pic.twitter.com/xErexXl1Mg

Like the series of severe thunderstorms that flooded Toronto's downtown core this summer, the high-profile sinkhole incident has many concerned about our very old and ever-aging underground infrastructure.

At least seven similar sinkholes have been reported this year, according to the Toronto Star, which notes that the average Toronto water main is 59 years old.

Thirteen per cent of the city's water pipes are between 80 and 100 years old and 11 per cent have hit the century mark. Roughly 1,400 of these water mains break every year on account of corrosion and thinner-built walls.

A dramatization of the sad state of Toronto infrastructure. TTC vehicle swallowed by a sinkhole. Just classic. https://t.co/B688ITE0kJ

In the Port Lands, where almost everything is built on top of marshland, flooding (both natural and of the broken pipe variety) is of particular concern.

Fortunately, the city is working with Toronto and Region Conservation Authority and Waterfront Toronto to address the problem via 'The Don Mouth Naturalization and Port Lands Flood Protection Project.'

The goal is to transform the mouth of the Don River into a "healthier, more naturalized river outlet, while simultaneously providing critical flood protection to 240 ha of Toronto's eastern waterfront" by 2024.

That should help address the sinkhole problem, at least in the Port Lands — plus, we get an entire new island out of it.

by Lauren O'Neil via blogTO
Posted by Arun Augustin at 7:19 AM