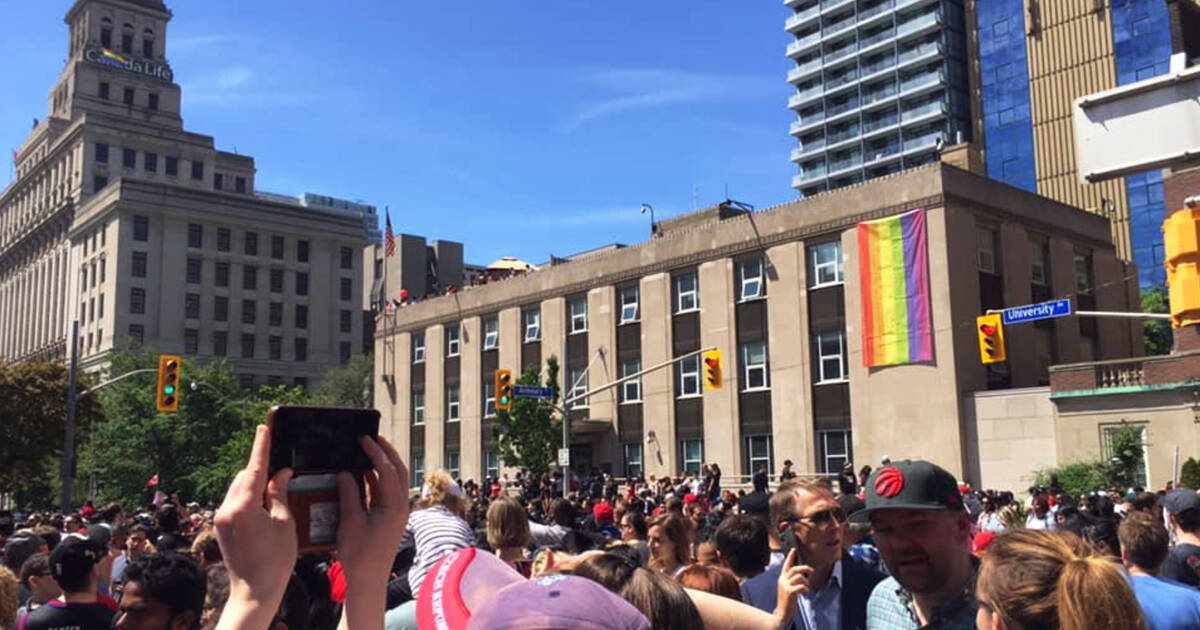 When the Toronto U.S. Consulate’s request to fly the pride flag was denied by the U.S. State Department, they found another way. And everyone is applauding them for it.

In an act of defiance, the U.S. Consulate draped the pride flag over the side of their building on University Avenue, which doesn’t require government approval.

For the 6th year, we are proudly raising this beautiful Pride Flag at the U.S. Consulate in Toronto to mark June as #PrideMonth! @usconstoronto will also march in the @PrideToronto parade to honor #Stonewall50 — one of the landmark moments in the fight for #LGBTQ rights. #PrideTO pic.twitter.com/A2DtyvNcQz

Toronto’s U.S. Consulate wasn’t the only one to have their request denied.

NBC reported that embassies and consulates around the world were told they couldn’t fly the flag this year.

In an interview with NBC News, U.S. Vice President Mike Pence, who has been heavily criticized for supporting conversion therapy, said, “On the flagpole of our American embassies, one flag should fly and that’s the American flag and I support that.”

thank you @usconstoronto - this act of inclusion and acceptance means more especially given your VP was against it and you still found a way! 👭👬🌈🏳️‍🌈🏳️‍🌈🏳️‍🌈🏳️‍🌈

Many were confused with the move as Trump tweeted a surprisingly supportive message for LGBTQ+ folks at the beginning of Pride Month.

....on the basis of their sexual orientation. My Administration has launched a global campaign to decriminalize homosexuality and invite all nations to join us in this effort!

Under Barack Obama’s administration, pride flags were allowed to fly outside government buildings.

by Mira Miller via blogTO
Posted by Arun Augustin at 8:11 AM