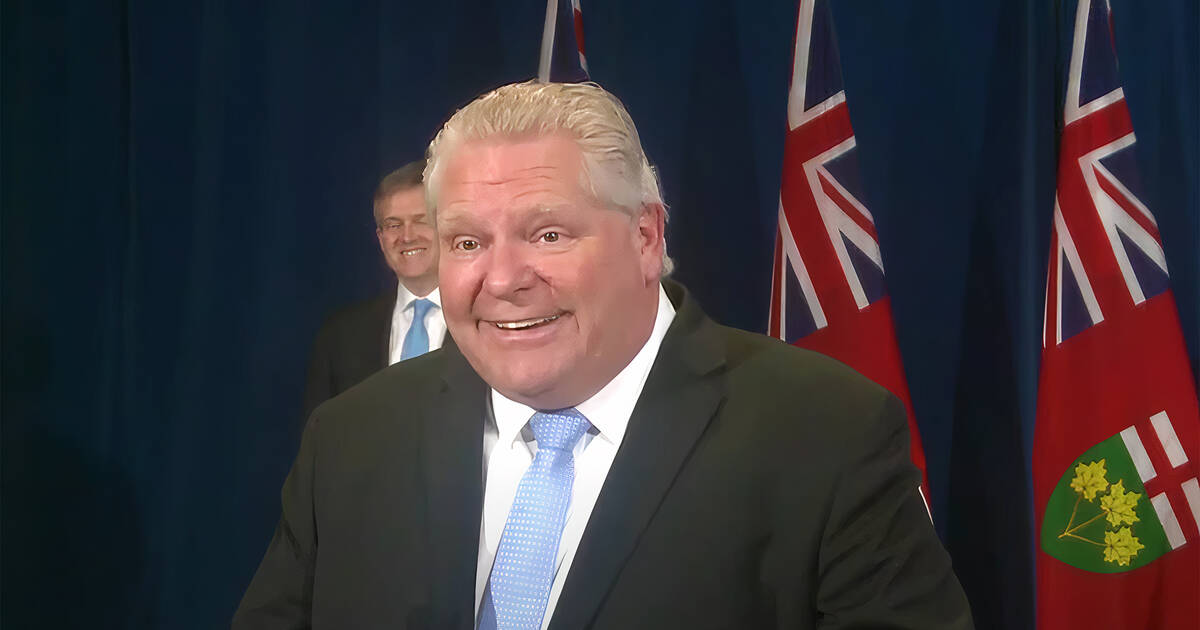 Many Ontarians have found themselves warming up to Premier Doug Ford a little more since the onset of the COVID-19 pandemic as they've watched him take the podium at his daily media briefings.

He's handled the situation pretty well, all things considered, and though the content of his speeches is serious, he's managed to pepper them with some memorable little zingers that have brought smiles to peoples' faces, whether he intended to do so or not.

Some of his absurd statements have made headlines and added some much-needed levity to the provincial pandemic updates.

Here are some of the best ones in recent memory:

a few months ago we all called doug ford a timbit and now i actually like the guy. very confused about things right now

Ford, who is quite noticeably not a small man, has referred to himself as a gorilla at not one, but three different pressers this year. And, not just any gorilla: an 800-pound one, to be exact.

Back in late May, the province was struggling to maintain decent coronavirus testing rates, and saw dips below 10,000 tests per day, which was far less than the capacity at the time.

Of the testing numbers, Ford said "Am I frustrated? Yeah I am frustrated but I have confidence in the team. I will be like an 800-pound gorilla on their backs every single day if I have to until I see these numbers go up" to media on May 21.

He used the phrase again on Aug. 11, saying he had been calling Education Minister Stephen Lecce multiple times a day in the lead-up to back-to-school this month. "I called the Minister the other day four times. I'm onto him like an 800-pound gorilla and he's a little guy," Ford joked.

Just a few days later on Aug. 14, he said it again, this time vowing to fight like an 800-pound gorilla for a new hospital in Windsor. He also that day called it his favourite saying, which he has made quite evident.

Any group of people who have grossly misbehaved during the health crisis have been classified as "yahoos" by the premier, whether it be the anti-lockdown protesters in April, the house partiers in Brampton in July ("you'd think the cheese slipped off the cracker with these people," he said on the 27th), or the hundreds attending a streetracing meetup in Ancaster just two days ago.

"If we weren't so backlogged on MRIs, I'd send you for an MRI to get your brain scanned"

Oh yeah, and about those yahoos — the streetracing ones, specifically — Ford had some tough words to offer them, which ended up making viewers crack up a little.

"If we weren't so backlogged on MRIs, I'd send you to the MRI to get your brain scanned, because I just don’t think there's anything in there," he near-shouted on Sept. 21.

Lmao. Not Doug Ford saying he will ask them to go for MRI if there weren't backlogs. 😂😂😂😂😂😂😂 Ontarians, stay at home and stop stressing this man

"A few fries short of a happy meal"

Ford certainly hasn't been shy in speaking out against people who continue to host large gatherings and backyard parties amid the health crisis, calling them reckless and careless, among other things.

He also doesn't think highly of their intelligence: "They're a few fries short of a happy meal," he said on Sept. 17, a nice follow-up to his cracker comment above.

Doug Ford is good for the colloquial man-of-the-people banter. The other one is: "I was on it like an 800 lb gorilla".

Ford is definitely a proponent of enjoying a good cold beer once in a while, but based on how he talks about weed, he doesn't seem to be much of a smoker.

He's referred to "doobies" multiple times, like everyone's dad has at one point done.

On the topic of people being ticketed for drinking in public parks, Ford had this to say on Aug. 14:

"They're making it legal to go out and smoke a joint, a doobie, a reefer, whatever the heck they call it nowadays... I wouldn't want my kids walking by with a bunch of dudes smoking marijuana, but if a couple guys are sitting there quietly at a picnic bench having a cold little beer, who cares?"

And on Sept. 4, he begged young people socializing not to pass their marijuana around: "[People] shouldn't be sharing anything. I don't care if it's those doobies, joints, whatever you want to call them, or drinks, or anything; just don't share 'em, simple. And wear a face covering."

He then continued on in his classic boomer dad lingo, saying that if people just abide by provincial health and safety guidelines, everything will be "hunky dory."

"God knows I need a little bit of exercise"

When asked about potentially opening up golf courses back in Stage 1 of lockdown on May 8, Ford said he understood the case that people were making for getting out onto the green.

He also let us all know that he's a terrible golfer, despite having a lot of friends who are heavy into the sport.

Who doesn't love a self-deprecating sense of humour?

"I make the best cherry cheesecake ever"

Doug's cherry cheesecake became famous after one single comment about it during a presser on May 11 led to huge demand for the recipe, which he was kind enough to provide in an adorable video segment a few days later. (Spoiler: it's pretty darn basic.)

At the lectern, Ford was talking about the fact that yeast, flour and other pantry staples were selling out at grocery stores as people were entering the bread-baking phase of quarantine.

"We will make sure we have those [baking supplies] on the shelves, it’s so important," he said. "And by the way, I make the best cherry cheesecake ever."

He went on to detail that he "does it from scratch. No recipe, I got it down pat." And then, a bit more of his characteristic self-deprecation in regards to his weight: "And you can tell I’ve eaten one too many cheesecakes. That's my problem."

Remember back when everyone was absolutely losing their shit over not being able to get a haircut? Like, people were literally taking to the streets because they weren't allowed to go to a salon, among other places, for a few weeks? That was fun.

It was back in May that Ontarians were getting antsy about such important things in life, and when asked when stylists would be able to return to work again, Ford reminded us that we're all in this together.

"Look at my hair, I look like a sheepdog right now," he said on May 14. "I think a dog groomer, I should go there and get a little clip myself."

He added that he lives with five girls so he "heard all the time" how badly everyone wanted to get their haircut.

"I don't have time for politics"

No, the province's top politician does not, in fact, have time for politics — or so he said on Sept. 10, really referring to the drama surrounding the Legislative Assembly.

"I hope the tone of the opposition is collaborative, I don't care what colour of party you're from... we need to work together," he said.

"I just hope they don't play politics, I don't have time for politics."

"There's a whole world outside Toronto"

Though those who live in rural Ontario may argue that Ford doesn't truly subscribe to this sentiment, the premier has reiterated a number of times that the province actually has more to it than just Toronto — shocking.

In his presser on Aug. 17, he told reporters that there is, in fact, "a whole world outside Toronto," and on Sept. 23 he stated once more that "the world doesn't revolve around Toronto" when asked why he held a conference in Huntsville.

His description of ragers

We all know Doug Ford's brother Rob liked to party, and it seems based on how Doug now describes parties that the duo may have seen some pretty bonkers nights in their earlier years.

The premier has been talking a lot about social gatherings lately, referring to a few of them as "wild backyard parties where people are drinking, hugging, kissing, spitting, every other thing they can possibly think of" on Sept. 17.

In the same briefing, he called organized weddings at banquet halls that are following health and safety measures far, far different than the "free -for-all parties where everyone is going hog wild swinging off the trees and everything," which are apparently a thing that some miscreants in Ontario are hosting these days.

On Sept. 18, he again mentioned crazy party antics like "hugging and kissing and swinging off the trees and spittin' and everything else."

Definitely does not sound like my kind of party, COVID or not.

I mean... am I not cool enough to be invited to a good ol' fashioned spittin' party?

Again, on the topic of the car rally in Ancaster this past weekend, Ford had a lot to say.

One journalist brought up the story of a female reporter who was attempting to cover the mega meet and ended up being harassed by attendees.

Ford called the group's actions "appalling," reminding men that they can definitely bully each other, but not women (???).

in response to a question about a female reporter being bullied during the car rally in Ancaster this past weekend, Doug Ford just said it's ok to bully a man, but not a woman because tough guys don't do that. daily briefing today. wow.

A few other one-liners of note: When Ford said on Aug. 31 that the provincial government would "move in like storm troopers" if COVID-19 became a serious problem in schools. Also, when he condemned America's "shenanigans" in regards to 3M masks, which they were no longer exporting to Canada.

"I’m just so disappointed right now. We have a great relationship with the U.S. and they pull these shenanigans? Unacceptable," he said on April 4.