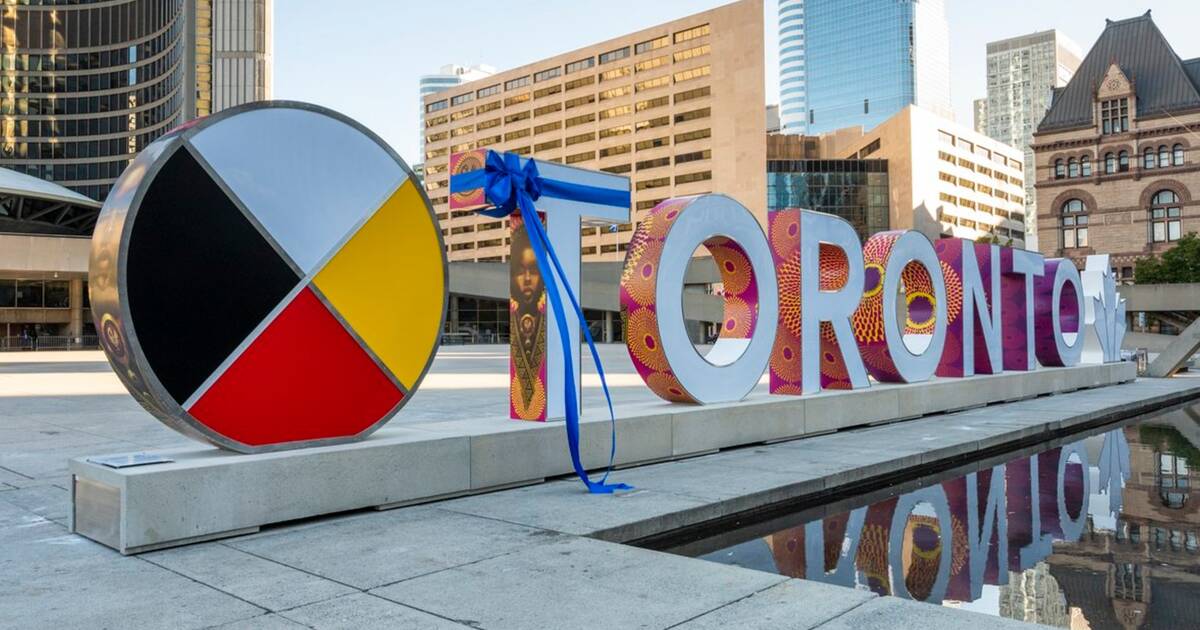 The new Toronto sign has been officially unveiled at city hall.

The sign is a more durable replica of the original (installed in July 2015 for the Toronto 2015 Pan American/Parapan American Games). It is illuminated, stands 10-feet tall and features a designed vinyl wrap on the outer edges of the of its letters.

On Friday, Mayor John Tory unveiled the new sign at Nathan Phillips Square. The first a vinyl wrap on the outer edges of the letters is designed by Toronto artist Danilo McCallum.

The old Toronto Sign was wrapped in the past — typically to promote events and projects. Previous wraps have included Pan Am and Parapan Am Games, a Nuit Blanche Toronto artist installation by JR, Toronto Neighbourhoods, Canada 150, My City My Six Exhibition, and Indigenous Iconography.

New TORONTO sign is in place. Mayor @JohnTory is going to welcome it in some fashion (smash a champagne bottle on it, or just gesture grandly?) at 10 am. pic.twitter.com/PGR5BWHov9

The new design recognizes the International Decade for People of African Descent which was introduced by the United Nations General Assembly to honour "a distinct group whose human rights must be promoted and protected."

"Our community has contributed so much to the fabric of this city and the country and I hope that we celebrate this as one of those victories," McCallum said at the unveiling.

"As a Torontonian, I'm proud that the city of Toronto chose to recognize Black people and a Black artist's work on the new sign. As a global city, I feel that this shows leadership and it sends a reminder that all of us should hold the city accountable in the face of injustices."

Watch the unveiling of the new Toronto Sign here: https://t.co/bPfICqmZil

While introducing the city's latest addition, Tory said the sign will be better than ever.

"We made it more durable, it has newer technology in it, it has a very important new skin on it."

Tory also said that the sign adds a bit of hope and joy for Torontonians, specifically during a time of uncertainty.

"I am pleased to see that as part of the unveiling of our new sign, the first wrap will recognize the International Decade for People of African Descent."

"This sends a powerful message to our residents and the world that Toronto is committed to ending anti-Black racism here and that we are prepared to make the systemic changes that are needed. I encourage all Toronto institutions to demonstrate their commitment as well."

The Toronto Sign is back! The @cityoftoronto unveiled the newly rebuilt sign along with its first wrap, Danilo Deluxo McCallum's Patterns of the People, in recognition of United Nations’ International Decade for People of African Descent. Learn more at https://t.co/wKQAO5RjLE. pic.twitter.com/L5rpWsR0Xn

According to the city, after more than five years, the original Toronto Sign was showing significant wear and tear, which prompted officials to build a new one instead of repairing the old one.

A Destination Toronto visitor survey found the Toronto Sign was one of the top three most visited attractions in the city and it is consistently ranked as one of the most Instagram-worthy spots.

by Tanja Saric via blogTO
Posted by Arun Augustin at 9:48 AM