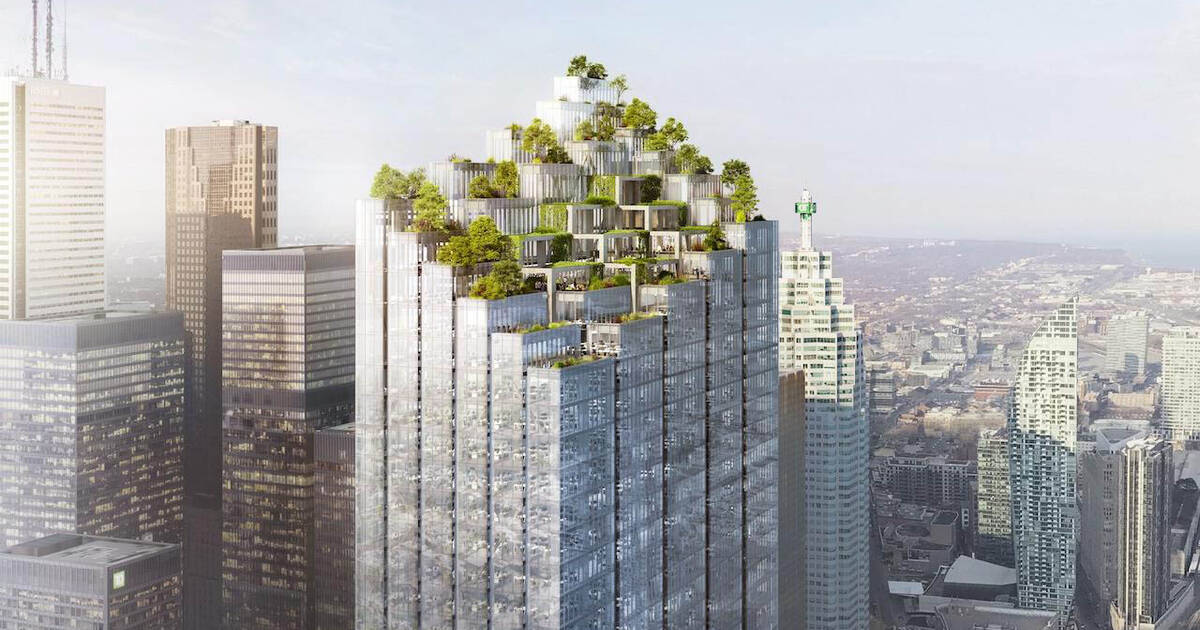 An unconventional office tower planned for the cozy lot beside Toronto's Union Station is set to tranform the city's skyline in a way that could give even the majestic CN Tower a run for her money. A short run, but a run nonetheless.

Called Union Centre, the proposed 264-metre-high building would be taller than the TD Centre and rank among the largest of its kind in Ontario, with 1.7 million square feet of office space and a 2,000-person event venue.

It'll also look mad cool from anywhere north of Front Street, thanks to glowing elevators that make the tower's exterior look like a soundboard equalizer as they go up and down—"a bit of vertical ballet on the skyline," as The Globe and Mail's Alex Bozikovic put it last week when unveiling new renderings for the project. 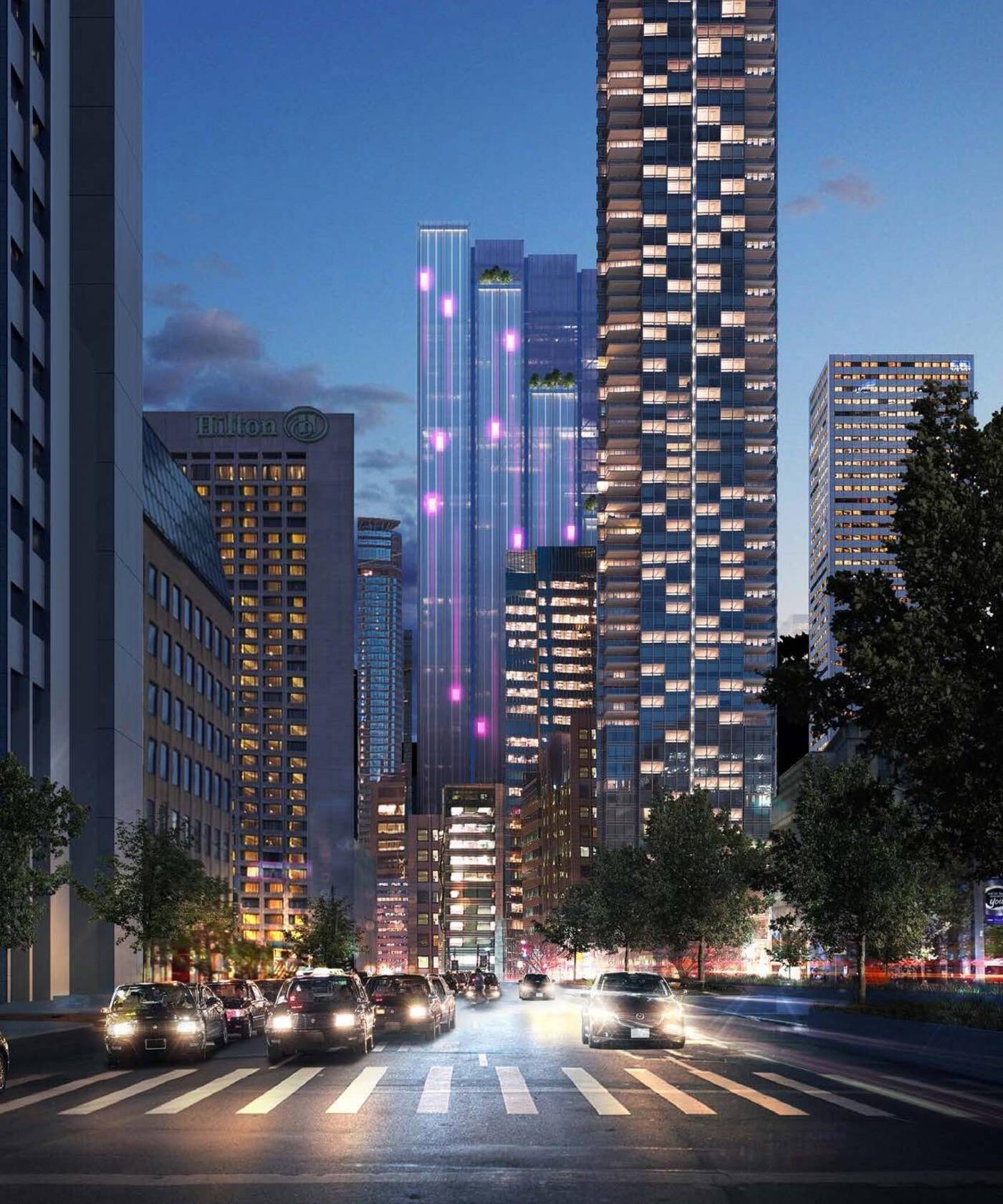 LEDs are proposed not only for the elevators but for the building's entire envelope so that Union Centre, like the CN Tower, could create its own light shows at night. Image via Urban Toronto/Allied REIT.

If the free light show isn't impressive enough, Bozikovic says that the elevators (of which 30 are proposed in total) might also have terrariums attached to them, which would give the effect of live plants moving all over the building when active.

And then there's the rooftop forest, landscaped and terraced with glass walls sheltering trees from the wind on their respective rooftop oases.

Amenities such as a gym and restaurant on these uppermost floors will boast unobstructed views of the CN Tower, Toronto Isands and glimmering Lake Ontario. 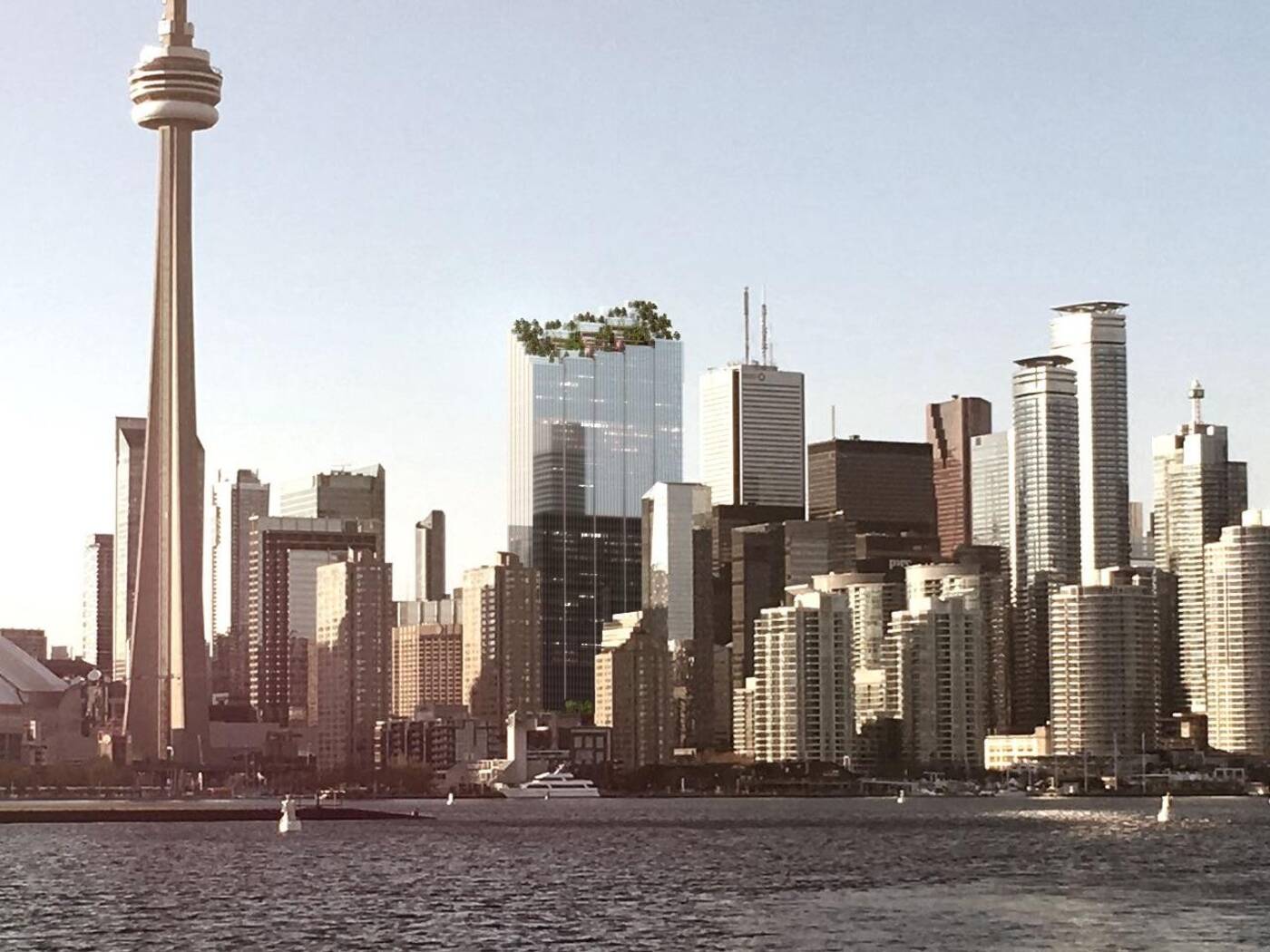 If built as proposed, the Bjarke Ingels Group-designed office tower would be quite wide, east-to-west, but incredibly narrow north-to-south. Image via Urban Toronto/Allied REIT.

At its base, the complex will feature several layers of public space connected to Union Station via the existing Skywalk, which will be rebuilt and incorporated into the new office tower's podium, according to Urban Toronto.

A tunnel running through the building will itself be green-scaped and closed off to traffic, save for vehicles heading to park or load and transport goods. New shops will be built into the tower's multi-level base and accessible via a network of escalators and elevators.

The building, which is planned for a tiny lot to the west of Union Station, behind an unmovable and incredibly important data centre, will be connected to the PATH for easy access to most major downtown Toronto attractions. 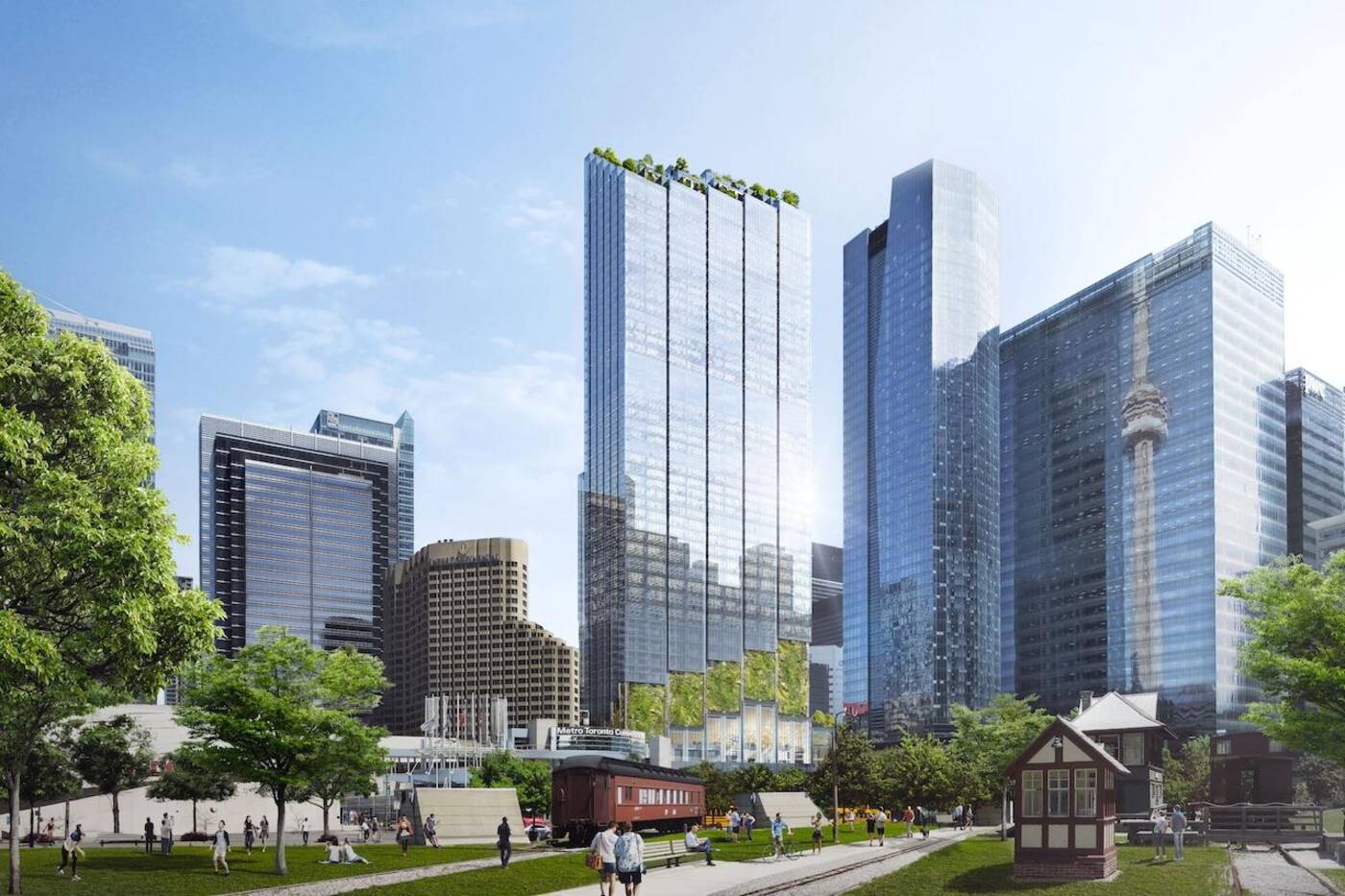 The centrally-located building will reside directly behind the data centre through which much of Toronto's internet traffic flows. The data centre cannot be demolished or moved, hence the skyscraper's narrow build. Image via Urban Toronto/Allied REIT.

Developers Westbank and Allied Properties REIT have enlisted Bjarke Ingels Group (BIG) to design Union Centre on the unconventional lot (owned by Allied) between Front Street and Station Street (which is also owned by Allied).

This is the same world-renowned Danish design firm behind what will eventually be one of Toronto's most impressive residential developments, as well as the massive, zipper-inspired Serpentine Pavilion in King West.

BIG partner Thomas Christoffersen told The Globe last week that the office spaces inside the 52-floor building, if designed as proposed, will be intentionally spacious and bare—flexible and warehouse-like with exposed concrete and soaring ceilings.

"Our idea was to do the most utilitarian building possible, creating the biggest floor plates we can," he told Bozikovic. "The base will be public infrastructure."

As for whether or not the gorgeous rooftop greenery will be open to the public (or reserved exclusively for office tenants) remains to be seen—but wouldn't it be nice to have a forest in the sky to visit every once in a while?