The top 41 restaurants near the Rogers Centre 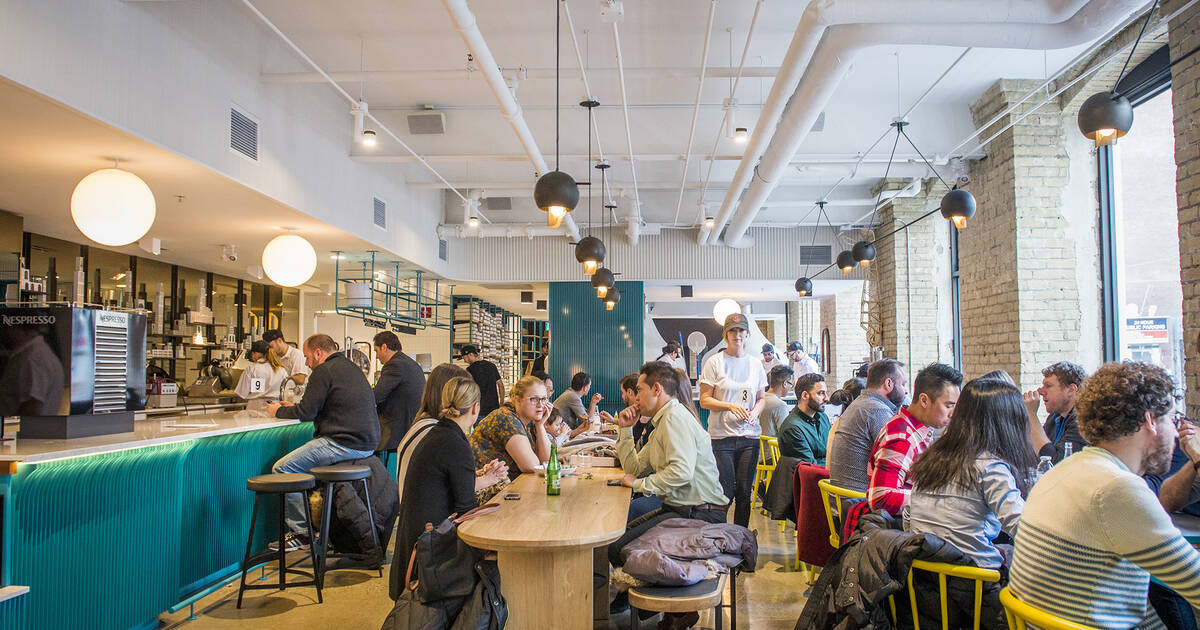 Restaurants near the Rogers Centre will keep all your bases covered as you head to your next Blue Jays game. If the idea of eating overpriced ballpark grub holds no appeal, there are a number of options in the area for both pre- and post-game food and drinks.

And don't forget: you can bring your own food into the Rogers Centre as long as it's wrapped, bagged or inside a container.

Here are my picks for the top restaurants near the Rogers Centre.

Not game for a ballpark dog? You'll find this sub shop on King West serving up another kind of foot-long for under $10. Order hot or cold subs to stay or go.

Coffee, smoothie bowls, poke bowls and grain bowls are what's on the menu at this fast casual spot on King West.

Found just a short walk away from the Rogers Centre near Peter and Adelaide is this quick service joint devoted to chicken and salad.

Found on Adelaide, this pizza joint churns out personal-sized four-slicers in seven to nine minutes. There's options for both vegetarians and meat lovers.

If you're coming from south of the stadium this takeout joint on Queens Quay is a good option. They offer both veggie and meat roti as well as samosas and veggie biryani.

With tons of experience serving pre-theatre crowds, and a quick-service grab-and-go counter for the really impatient, this Oliver & Bonacini establishment inside the TIFF Bell Lightbox on King West often has a game day special.

You'll find some of the best soup in Toronto at this fast casual spot on Adelaide. Add a wrap on the side and you're in for a hearty treat.

Sushi burritos and poke can be yours just a short distance from the Dome. Other offerings include sushi burgers, sushi bagels and an interesting take on fish and chips.

Make your way to Adelaide between John and Widmer to discover this build-your-own wood-fired pizza chain that's similar vein to Blaze or Pi Co. 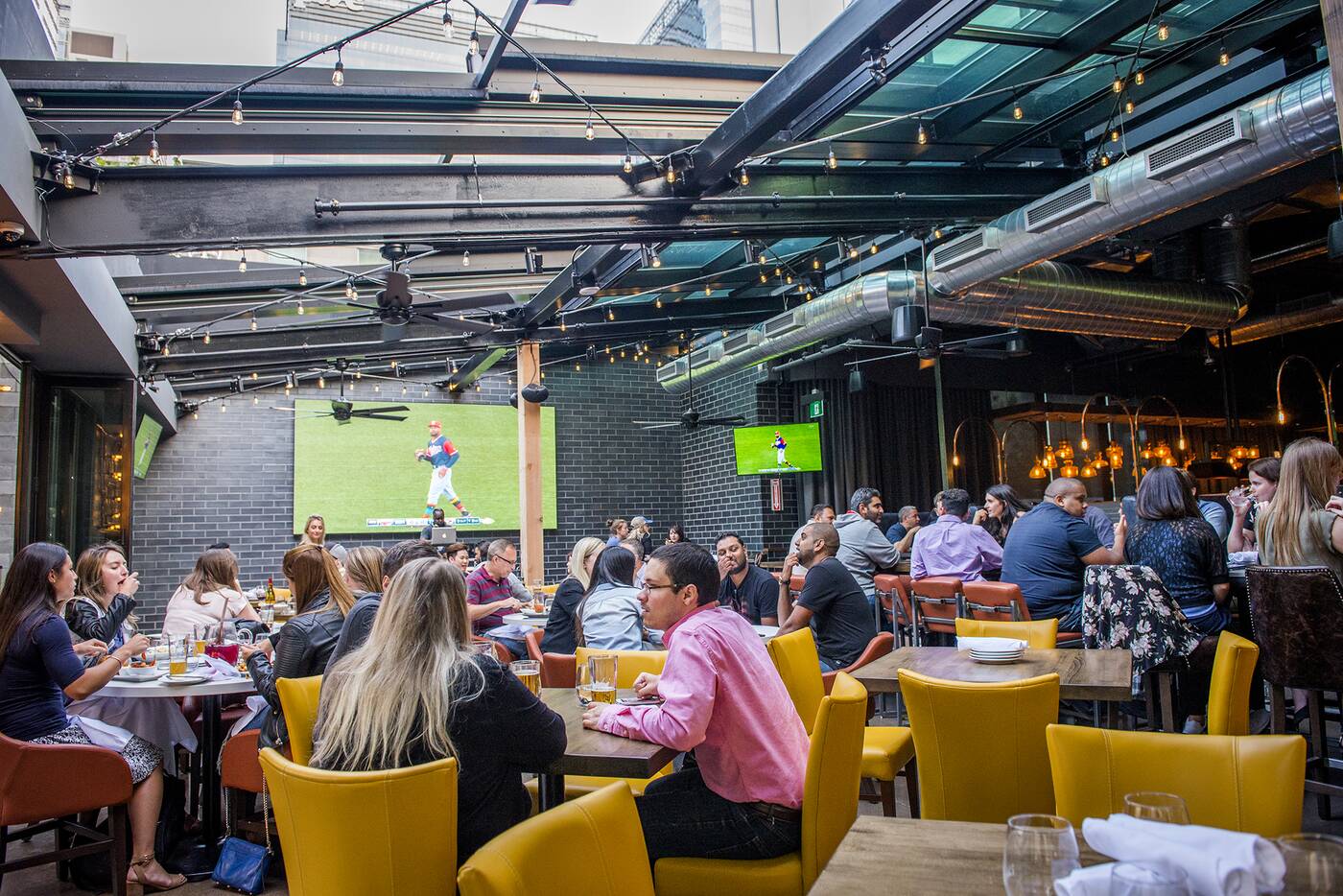 Make your way to the patio when you visit Kellys Landing. Photo by Hector Vasquez.

The waterfront brewpub is a prime spot for kicking back with a beer before or after a game. Here you'll find the whole lineup of house brews on tap, plus a menu of pretzels, pizza and wings.

Beer aficionados will appreciate the 36 craft brews on tap, two rotating casks and 100-plus bottles, plus a menu of pub grub and bar snacks at this dark and cramped King West pub.

Make your way to this CityPlace pub on game day and see the place decked out in blue and white. Food offerings include pizza and burgers.

What used to be Casey's is now this spot that is part of The Landing Group of restaurants. Of all the locations, this has to be one of their most high-energy ones, encompassing indoor and outdoor elements.

Toronto's biggest sports bar is conveniently located just a short walk from the Rogers Centre. It's essentially a mammoth man-cave complete with more TVs than you could possibly want, hundreds of taps and a menu full of pub favourites.

This King West bar is perfect spot to meet up with some friends before or after the game. The hangout boasts pool tables, ping pong and really good nachos.

Boasting an impressive draft selection with over 50 different beers on tap, this is another good spot to stop in for a cold one as well as snacky foods like nachos, garlic fries and mini bacon donuts.

This huge pub just outside the Rogers Centre on Front is serving over 40 draft beers and wings dressed with your choice of 40 sauces.

Just across the street from the Rogers Centre is where you'll find Toronto's premier destination for kids both big and small. Play nearly a hundred arcade games, enjoy live entertainment and munch on Canadian pub food.

This restaurant dedicated to the Great One is super close to the Rogers Centre so it isn't a bad bet for a pre- or post-game drink or snack. If the weather is nice head, upstairs to the Oasis rooftop patio.

The US-based chain pairs cafeteria style seating with big screen TVs and a wide variety of burgers, fries and shakes. 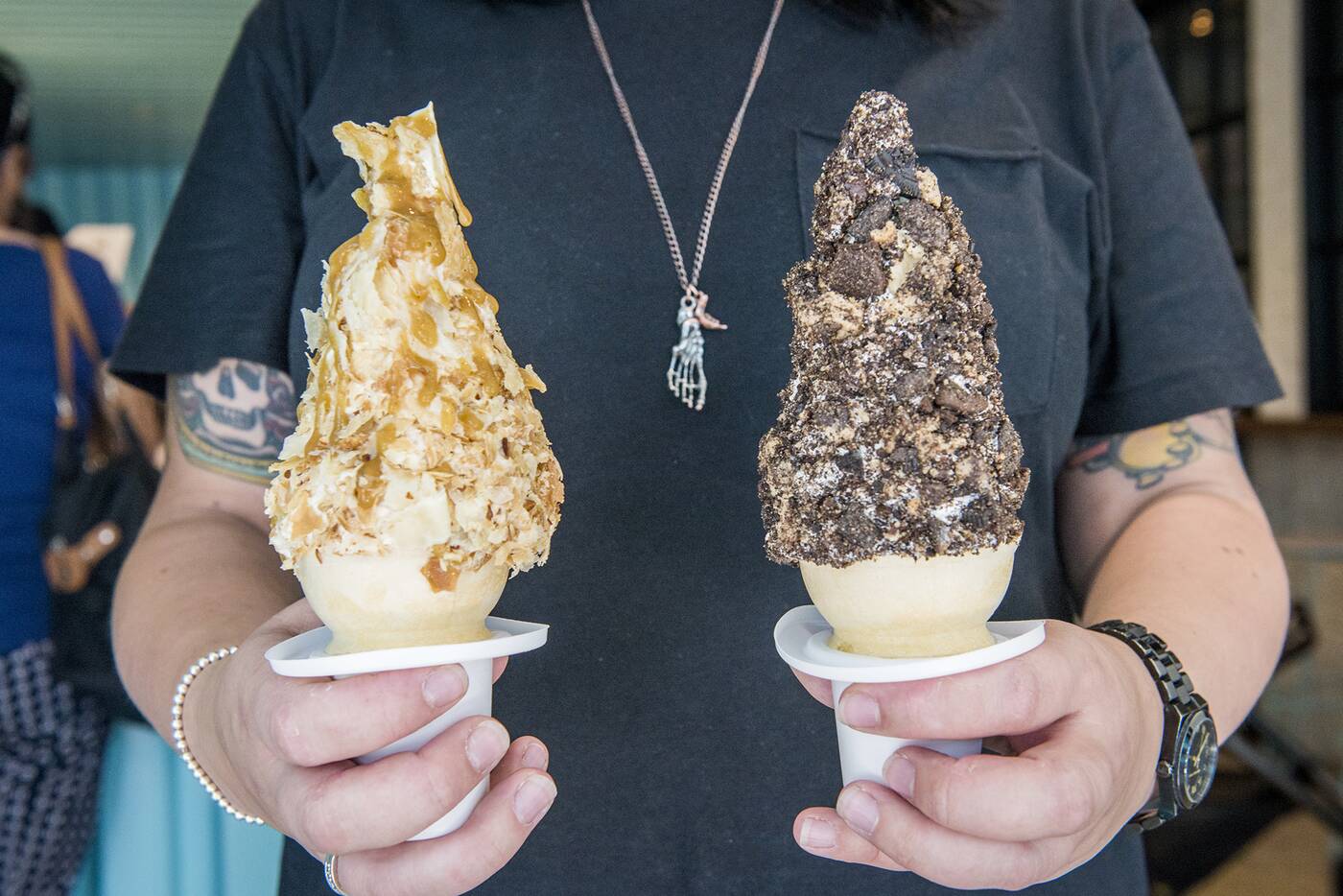 Grab a cone from Sweet Jesus before the big game. Photo by Hector Vasquez.

The third location of this Toronto coffee chain can be found inside the Harbourfront Centre. Grab a latte or a craft beer and a seat on the patio to take in a sweet view of Lake Ontario.

If you want a little sweet treat before or after the game, this might be your best bet. The cafe and bakery hidden away between Charlotte and Spadina specializes in French-inspired pastries with Asian flavours.

Beer ain't your thing? Quantum at King and Spadina will caffeinate you instead. They serve coffee, lattes and unique offerings like creme brulee cappuccinos.

The artisanal coffee shop near King and Spadina has a ton of specialty drinks and even more special baked treats and bon bons. 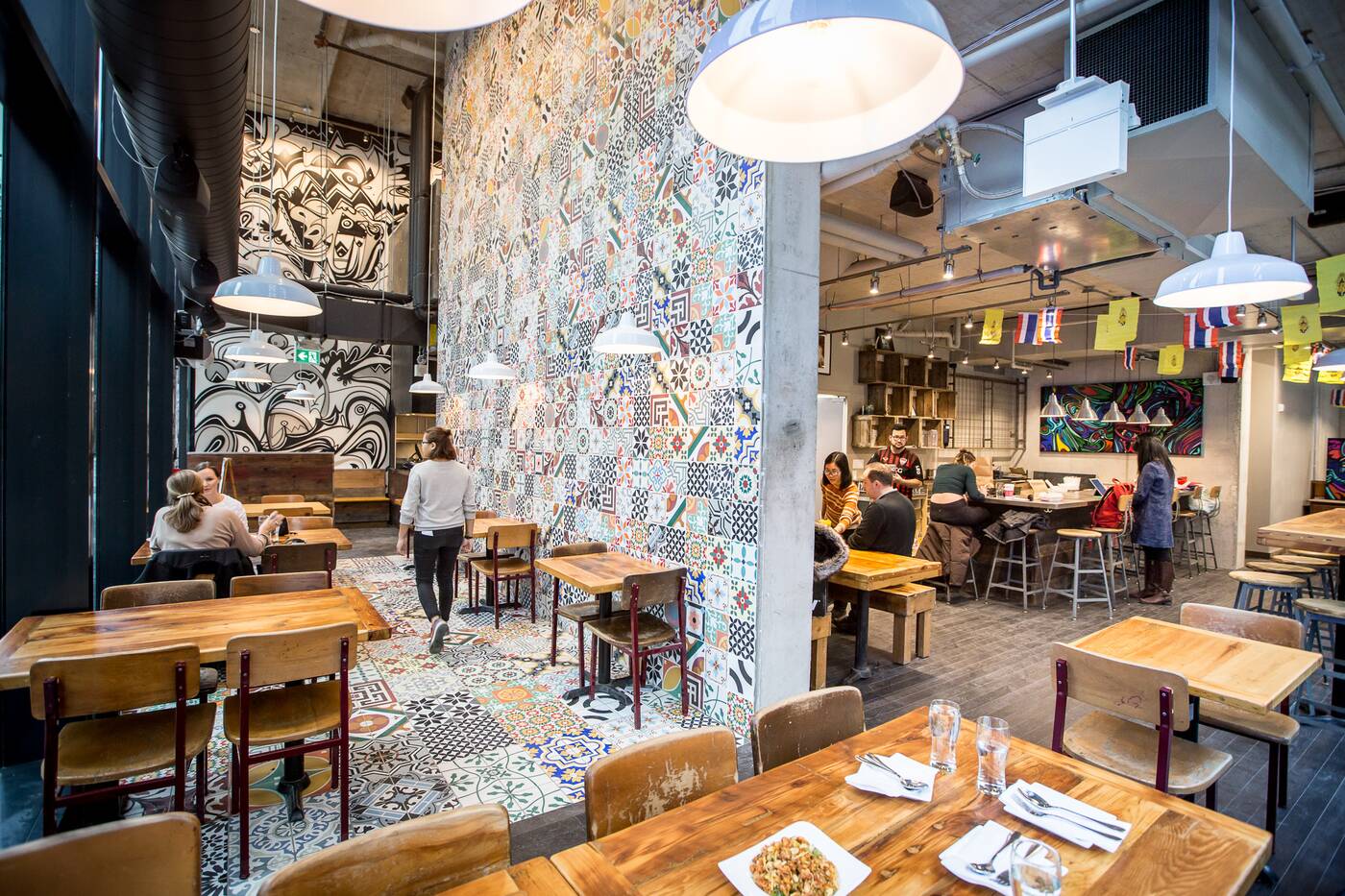 Khao San Road is just one of the many places to satisfy cravings for Thai near the Rogers Centre. Photo by Jesse Milns.

Best of the Rest

Here's a two-floored restaurant just minutes away from the Rogers Centre that serves up gourmet twists on traditional Indian dishes.

This King West joint reimagines typical BBQ fare through the lens of sharing-style small plates. The menu features items from the land, sea and garden.

Also located on King West is this restaurant that's reinventing bar food with healthy and even vegan options so that you can spend your calories on drinking.

While this restaurant resides right next to the Scotiabank Arena, it's not a far walk from the Rogers Centre. You can't go wrong with a burger and brew before the big game.

The Italian restaurant at John and Adelaide offers a menu of pizza and pasta to go along with its sprawling patio.

The Charlotte St. Thai restaurant doesn't take reservations, so you know you can always get a seat as long, as you're prepared to wait.

Dubbed LC Central, this location of the Mexican chain at King and John is a favourite for tacos, Mexican street corn and cocktails.

Soup dumplings, spareribs and Szechuan scallops and shrimps are just a few of the offerings available at this Chinese restaurant near King and University.

You can also satisfy cravings for some of the city's best Thai at this restaurant on Duncan. Make sure to book a reservation ahead of time so you won't have to wait in line.

The second location of the Mexican restaurant can be found along King West. It's a popular spot for tacos, enmoladas and boozy margaritas.

If you're craving for a traditional Greek meal before heading over to the Rogers Centre this restaurant on King West will do the trick. Order up the roast lamb, you won't be disappointed.

For over fifteen years this restaurant along King West has been dishing out lemon grass soup, green curry, pineapple fried rice and curry pad Thai.

Feeling experimental? Here's where you'll be able to sink your teeth into Western-inspired Asian dishes. There's taco, sushi and much more.

by Jaclyn Skrobacky via blogTO
Posted by Arun Augustin at 3:18 AM