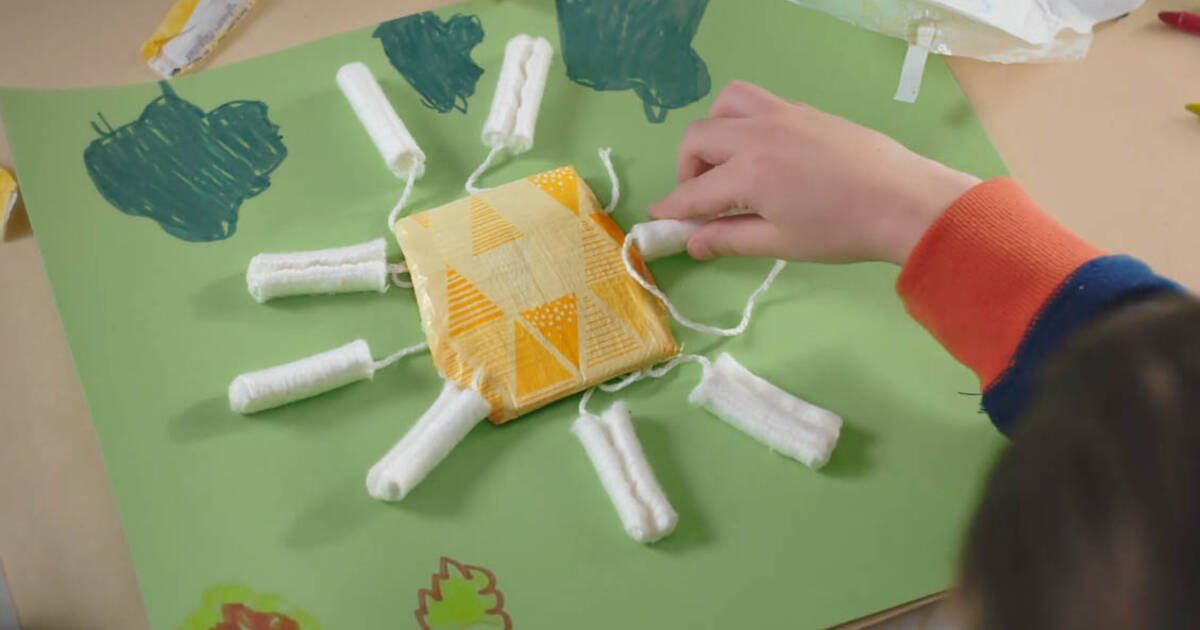 The City of Toronto wants you to know that recreational weed, should it fall into the hands of children, can pose as much a safety threat as anything else in your medicine cabinet—like tampons, for instance, or even maxi pads.

A chilling PSA released by Toronto Public Health on Monday demonstrates just how easy it is for kids to find and make use of nefarious items in Mommy and Daddy's bathroom.

The 30-second-long spot begins with a little boy, no older than 6, working on an art project at the kitchen table. We see him using safety scissors and white glue, but the work itself remains obscured until his mom comes in and asks what's up.

"I made this for you, so you can hang it up at work!" says the sweet kid as his unconventional masterpiece, made from feminine hygiene products, is revealed. Mom, low-key horrified, lets out an uncomfortable chuckle.

"Kids get into everything," booms a voiceover. "So always remember to keep cannabis locked up and out of reach of children."

The boy's father appears in a kicker at the end of the commercial and, clearly relieved that the child did not find and waste his little blue boner pills, reacts to the piece with a bemused "Oh!"

Comments have been turned off for the ad on YouTube and, based on how Twitter users are reacting, that's for a good reason.

Some are wondering why the city didn't choose a truly dangerous household item to illustrate their point—something like alcohol, for instance, or addictive adult painkillers.

Why are adults not asked to keep alcohol and cigarettes and pills in locked areas away from kids? Cannabis is safer than booze pills and cigarettes yet there is no campaign telling parents to lock it up.

"Let's not look at the opioid epidemic caused by pharmaceutical companies and your doctors," responded one Torontonian to the ad on Twitter. "Let's worry about this instead. This is honestly the dumbest narrative to keep pushing."

"Yes parents need a public announcement and health warning about keeping your marijuana away from children," joked another. "I think we know this already. Mind you the first substance I ever tried as a child was alcohol because it's everywhere."

Others simply find the premise stupid.

Shit what if my kids make art with my weed

In a piece for The Growth Op, writer Emma Spears also touches on "the implied sexism of being embarrassed by some tampons and a maxi pad."

Surely, if embarrassment was the goal, why not have the kid find Mommy's Spanx? Daddy's butt plug? A three-figure receipt from Taco Bell?

"Why would you waste money this way ?" one concerned citizen asked Toronto Public Health on Twitter. Others were less constructive with their feedback.

"We know that cannabis is not a benign substance and evidence shows there are a range of potential health harms. This campaign uses a lighthearted and creative approach to promote an important message," said Toronto's Medical Officer of Health Dr. Eileen de Villa in a release announcing the PSA on Monday.

"We know that kids get into everything," she continued. "This is why campaigns like this are so important to remind parents and caregivers that if they are intending to use cannabis, they should safely store their cannabis in a locked area and out of reach of children."

by Lauren O'Neil via blogTO
Posted by Arun Augustin at 7:43 AM