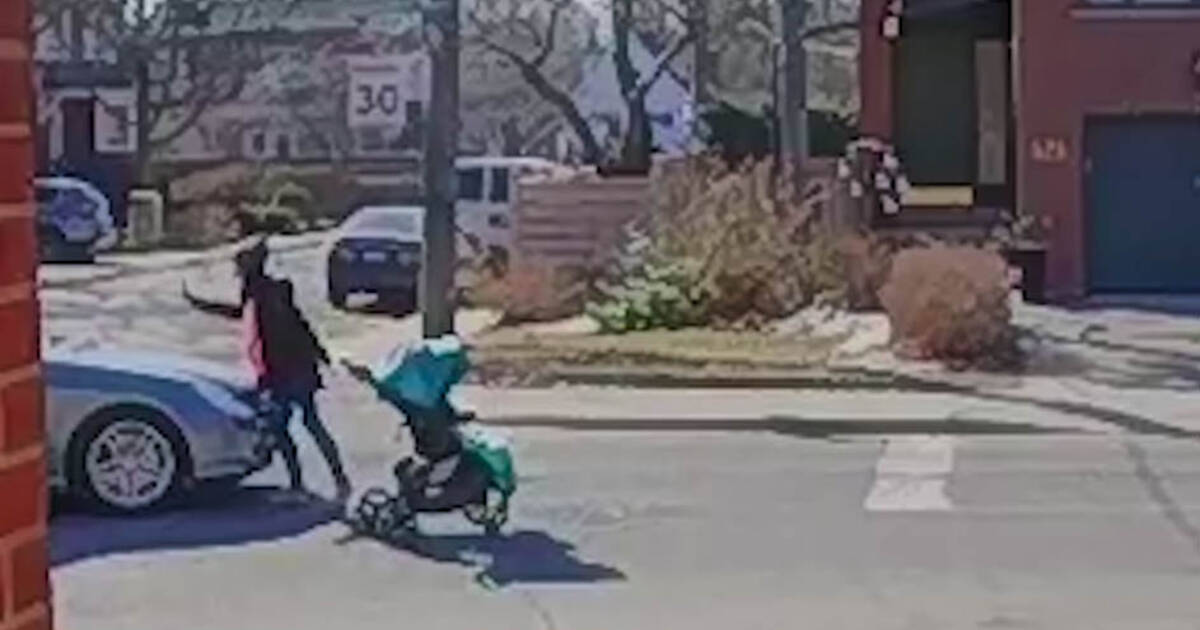 Dramatic video footage of a local woman facing off against the driver of a car that nearly rammed into her stroller at a traffic stop this week is currently making the rounds online, prompting many in the city to call for stronger traffic laws and better road etiquette.

"Mom loses it after car runs stop sign and nearly hits her baby," reads the caption of the video, which was uploaded to YouTube on Wednesday shortly after the incident took place.

"Due to the construction of the Metrolinx Eglinton LRT, a lot of traffic has ended up on the side streets and these occurrences are actually fairly frequent," wrote the resident who captured the scene with their home security system. "Although this one is maybe just a bit crazier than usual."

A woman almost got her stroller run over by a car in the middle of a Toronto street https://t.co/kH1IQQuTbz pic.twitter.com/1c7yV56iEg

The video in question, filmed around 10:25 a.m. on March 27, starts with footage of a woman walking down a Midtown Toronto sidewalk with a stroller. It is not clear whether or not a child is in the stroller she's pushing.

As the woman approaches the intersection, a car speeds through it in front of her. A second car follows the first without making a proper stop at the sign, prompting the woman to speed up and head it off, stroller first, in the middle of the road.

The woman starts banging on the hood of the silver vehicle while screaming "No! There's a child in this! There's a stop sign... You stop!"

As she pulls out her phone to take photos of the driver and their car, the driver starts to manoeuvre the vehicle around the woman who screams "are you f*cking kidding me?" and follows the car while leaving her stroller alone in the middle of the street.

The infuriated woman jumps on the hood of the car to no avail. The motorist is able to drive away as she slips off screaming something unintelligible.

A frightening scene. A scared parent. And 2 dangerous drivers. If you’re a parent you’ve probably felt this way at some point. All road users need to be more responsible, but it must start with largest vehicles that can do the most damage. City must enforce & build safer streets https://t.co/2OCOVcz5Nr

Many reacting to the video on Twitter are horrified by how the driver behaved.

"This is a daily occurrence in our 'hood due to LRT-diverted traffic," wrote another. "No traffic officers BUT parking officers ALWAYS giving tickets!!! Time to get it right Toronto."

I feel this woman 100%. Never felt so vulnerable as a pedestrian as when I was pushing a stroller. If anybody cuts you off, it's your baby that's going to take the hit. One time a car came so close to my stroller I could kick the door. And I did. You're in mama bear mode.

Others, however, are questioning how the woman handled the situation, suggesting that nobody should endanger the life of a child, or their own life, to win an argument.

"Seems like Moms ran out into the street to deliberately confront the driver. With her child leading the way," reads the top-voted comment on the YouTube video, which has now been seen nearly 20,000 times. "Great parenting skills.﻿"

"Let me be clear. THE CAR SHOULD HAVE COME TO A FULL STOP," wrote someone else. "However, she could clearly see the car was still moving and she sped up. She was using her carriage like a... I really don't know what. But it definitely put her child in a dangerous situation. The driver should have stopped but she made the situation worse.﻿"

RE: The video of the pedestrian with the stroller in #Toronto.

Sorry, but the moment she took both hands off the stroller to yell at the driver, I stopped being on her side.

When I'm walking with my 8 month-old, NOTHING will make me take both hands off the stroller.

Police told CP24 that they are aware of the incident, but it is not yet clear whether charges will be laid.

"A report to police has been made and it is with our 53 division unit now," said Sgt. Brett Moore to the news station on Friday morning. "I am going to let people make the decision in terms of what happened on that video."

"It is an open investigation but really we have to look and see what happens when cars and people come together," said Moore. "It is really about courtesy on our roads."

by Lauren O'Neil via blogTO
Posted by Arun Augustin at 9:13 AM