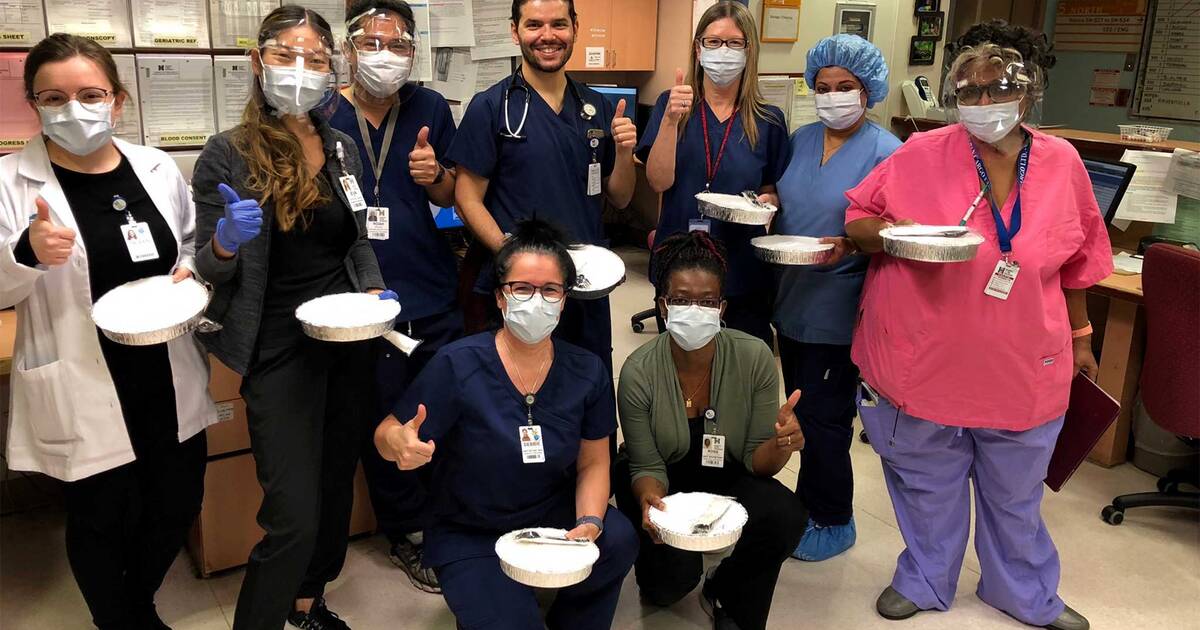 Feed the Frontlines is a grassroots organization that's been providing delicious meals from local restaurants to frontline healthcare workers. The initiative is not only keeping our nurses, doctors and medical staff fed, but it's also helping restaurants keep their heads above water.

The organization was started by Adair Roberts after she realized that a friend of hers, a restaurateur in New York, would be facing financial hardship after her business was forced to close dine-in service.

“The idea just sort of came to me and I thought, what if I called him and said I would donate money to purchase meals, and he could deliver those meals to an emergency department in New York City,” Roberts says.

Roberts works in healthcare and knew her way about finding an institution that would be happy to receive the meals, she admits. “I know from personal experience that [hospital teams] at the best of times don't have time to get meals.”

Roberts called up a hospital in New York and was able to make a delivery of meals happen the very next day.

“From that one idea to help a friend, Feed the Frontlines was born,” she says.

The day after the delivery in NYC, Roberts started cold-calling her favourite restaurants in her neighbourhood in Toronto. She knew that the local independent businesses in the city would be feeling the brunt of the closures mandated by health officials in Ontario.

“I called three of them and I said, I don't know if this is a small idea, a medium idea, or a big idea, but here it is,” Roberts says.

“And they jumped on board. And then I said, okay, well I'll call some hospitals around here. So I reached out and [by] the weekend, I had an order lined up for Mount Sinai Hospital.”

Roberts created a GoFundMe page to back the restaurants on March 20, and by March 24, Feed the Frontlines conducted its first delivery.

Here’s a behind the scenes look at how meals you buy get delivered to frontline workers by our amazing partner restaurants. Buy meals at https://t.co/avEQK6iqmj pic.twitter.com/PSQFMVcTbh

Roberts soon had others reaching out to her to join forces to back Feed the Frontlines.

“Now, we're a team of 13 people instead of just a little old me,” she says. “And so that helped too, because I suddenly had more arms and legs.”

Initially, Roberts was performing the deliveries of meals to the hospitals herself. But now that protocols around safe, contact-free deliveries have been established, she lets the restaurants perform the deliveries themselves.

One of five drops at lunch today was to North York General Hospital. 65 hot delicious meals from Pomegranate Restaurant to our healthcare workers at the hospital’s COVID Assessment Center. pic.twitter.com/KjsAGhCEsT

“How the process works is every week, a few days in advance of what we call our next cycle or next week, we send out an email to our contacts in the hospitals and the social service agencies,” Roberts explains.

“And we say, we have this many orders we can allocate this week. [...] And we say, what days would you like them, do you want lunch or dinner, what proportion are vegetarian. And then they tell us and then we assign the orders to the restaurant.”

This allows the frontline workers to get a variety of meals from different local restaurants.

And this is why Feed the Frontline has gained so much traction over a relatively short amount of time — its focus is not just on helping keep healthcare providers healthy and fed, but also on keeping smaller restaurants working and able to keep staff employed.

“Something we really focus on is, it not just helps the frontline workers, but it helps support the local restaurants stay in business,” Roberts suggests.

Pukka is proud to partner with FEED the FRONTLINES.
Your financial support will help fuel the extraordinary efforts of our city’s healthcare workers + support local restaurants + their employees with a single donation. Consider making a donation today! https://t.co/UUs06PsWVp pic.twitter.com/wcsnMFcaRF

“And that's what's been so critical. So we have taken a very particular approach, which is to say we'll bring on restaurants to the extent that we can provide them with enough orders to keep their noses [above water].”

“We have restaurants and we give them about three or four [orders of] 50 to 60 meals a week,” she says. “And that allows them to pay the rent, keep the lights on, [and] bring a couple of workers back to work.”

While Feed the Frontlines has delivered to almost every major hospital in the city, their focus is broader than this.

And the response from the frontline workers along with local restaurants has been great, Roberts says.

New notification 📧 Read a note from from an ER nurse. It sheds light on the plight of our frontline workers and the huge difference your donations make 🧡 pic.twitter.com/RSyYucZ6BZ

“Early on, when there weren't as many people doing something like this, [frontline workers] were so grateful to get a hot meal, what felt like a home-cooked meal,” Roberts says.

The response from social services agencies has been particularly special to Roberts.

“[Feedback from them is] even more kind of heartbreaking in the sense that they say, Oh my gosh, we're so grateful because this never happens for us,” Roberts says.

When it comes to response from restaurants, Roberts is also appreciative of the feedback she's been getting.

“One of the restaurants we work with, Little Sister, [co-owner Jennifer Gittens] was talking with me and she said, you know, you realize like you have kept us open.”

As an essential service, PARC continues to serve meals and provide support to community members. We were happy to deliver 40 delicious lunches (including vegetarian and vegan options) from Little Sister yesterday. pic.twitter.com/da2tifSmTU

“Our donors have been so amazing,” she acknowledges.

Roberts is also fielding calls from people across the country who want her advice on how to start an initiative like Feed the Frontlines in their cities.

“I've never done anything like this [before],” Roberts admits. “I've never raised $200,000 in four weeks before from people I don't know. It's been amazing to me.”

by Alisha Mughal via blogTO
Posted by Arun Augustin at 4:46 AM