Toronto is beyond annoyed with people who are not social distancing 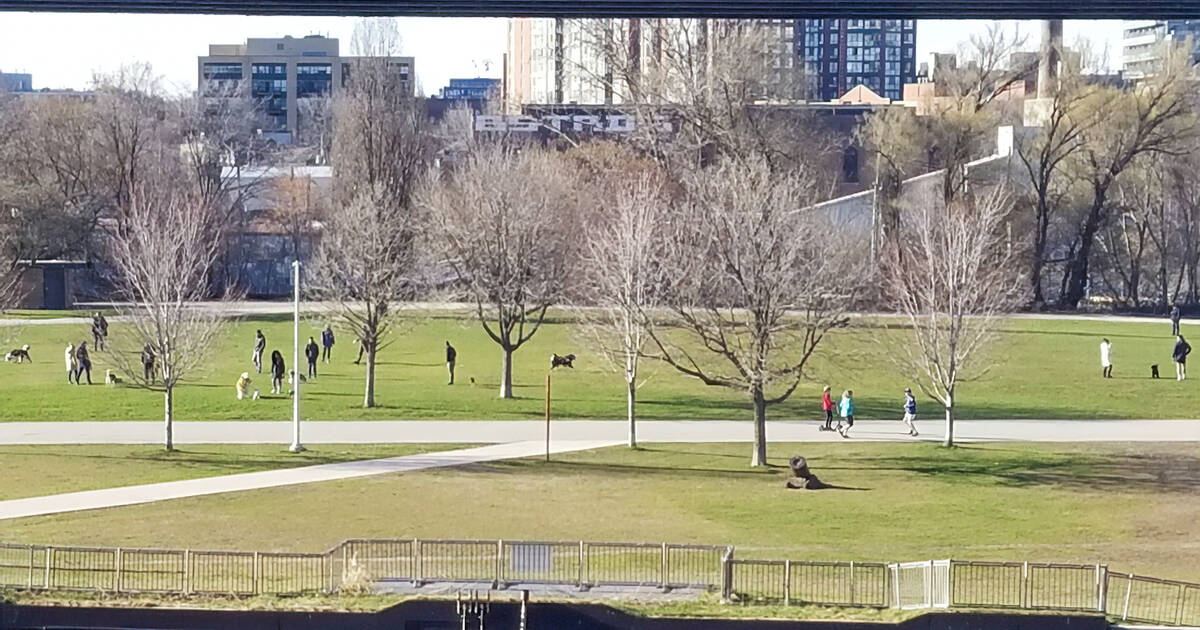 If there's anything more frustrating than forcing yourself to stay inside on a gorgeous spring day — you know, to comply with physical distancing bylaws amid a global pandemic — it's watching other people carry on through the window like nothing is amiss.

Beautiful weather (and perhaps a bit of stir-craziness) brought droves of Torontonians out of their lockdown holes and into public spaces on Saturday as temperatures rose to 13 C with nothing but sun in the sky.

This behaviour in itself isn't necessarily problematic — people are allowed to go outside for essential trips and daily exercise.

What we're not allowed to do, by order of both the provincial and municipal governments, is congregate in groups, make use of park amenities, loiter in green spaces or walk within six feet of people who don't live with us.

You should've seen the view yesterday at Yonge & Wellesley, it looked like carnival. Nobody cared about the distancing and as usual people were looking at me and making faces because I was wearing mask and gloves. People were chilling in groups all around.

With a solid six weeks of relative social isolation (and counting) in the books, more people than ever seemed keen to defy these rules over the weekend.

Maybe they couldn't resist the thought of a picnic in the park on such a pretty day. Maybe they (wrongly) assumed that falling numbers of new COVID-19 cases per day meant regulations were relaxed (they're not). Maybe they're just dicks — who knows?

Whatever the case, the actions of bylaw-breakers were called out by hundreds of social media users over the weekend — users who would also like to be outside having fun with friends, but are staying home on the advice of public health officials to literally save lives.

The City of Toronto stated in a press release on Sunday that it had received 149 complaints "involving people using outdoor amenities or not practising physical distancing in parks" the day previous.

This is far fewer complaints than we saw during some weekends earlier in the pandemic: 440 complaints came through last Friday, April 18, alone.

Trinity Bellwoods is packed. Explain to us why EVERY bench and picnic table wasn't REMOVED from EVERY park in the city. Signs and caution tape are a joke. Nobody respects them clearly. Easily 1000-2000 people are in Trinity Bellwoods and triple that at the lake. pic.twitter.com/FmfJTJPDoh

City officials say that Toronto police and bylaw officers have now issued 533 tickets and 11,487 verbal warnings in relation to social distancing violations and the use of park amenities since April 3.

Municipal Licensing & Standards and Toronto Public Health officials have similarly issued 76 tickets and 159 notices to non-essential businesses for operating in defiance of the province's Emergency Management and Civil Protection Act.

Colloquially, residents have been reporting violations in spates since the pandemic began — but many remarked this weekend that the problem seemed especially bad on Saturday.

@311Toronto Corktown common park has people having picnics on the grass, playing frysbi on the grass. People sitting on benches beside buildings near the park and so on... pic.twitter.com/NtnN2cVDxv

​"Maybe it's the proximity to the park, but Roncesvalles seems to be acting irresponsibly. Yesterday had tonnes of people out, sitting on benches in the street, not distancing. No masks," wrote one local on Twitter, to which another replied "Trinity Bellwoods area was a Petri dish yesterday."

"We need spring and summer to hold off for awhile because apparently Toronto thinks social distancing only applies if it's cold and rainy, not when it's sunny," wrote another.

"St. Lawrence market was noticeably busier today," observed yet another Toronto resident on Saturday. "People are starting to relax. I can only imagine what it will be like when the weather gets nicer. Ontario or Toronto should mandate mask wearing outside."

And it's not only park spaces and trails that are filling up with people again — many are reporting a serious lack of social distancing within essential businesses such as grocery stores.

"Hey Toronto, did I miss the memo that said we no longer have to do social distancing at grocery stores?! Because all you f*ckers at the Queen/Dufferin Metro, ESPECIALLY the folks who were masked, were getting WAY too close to one another," complained one resident last week. "Don't make me be 'that lady'!"

While wearing a mask outside isn't mandatory, staying six feet away from other people is — and violators can find themselves facing fines of anywhere from $750 to $5,000.

"The City of Toronto continues to respond to COVID-19," writes the city, which has recorded 4,798 cases of the 2019 novel coronavirus so far.

"Residents are reminded of the importance of reducing all contact with others as much as possible and staying home except for essential outings to help stop the community spread of the deadly virus."

by Lauren O'Neil via blogTO
Posted by Arun Augustin at 8:16 AM