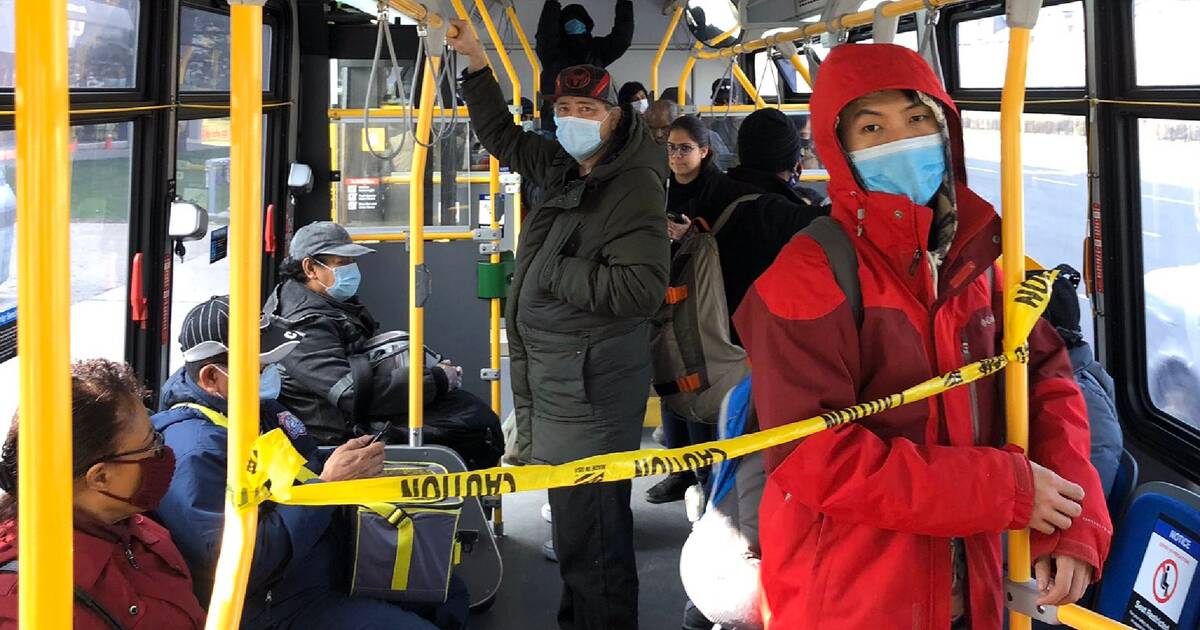 The TTC has been struggling both practically and financially since the pandemic began in Toronto, and it seems they still haven't figured out how to properly prevent crowding on buses.

The transit agency has implemented various measures to enable social distancing on its vehicles and address crowding issues, such as only allowing rear door boarding, not accepting methods of payment other than Presto, blocking off every second seat and more.

For your safety, here are some changes we’ve made on buses:

⬛ Rear door boarding only (unless you require the kneeling ramp)
⬛ No cash fares, tickets, or tokens
⬛ No paper transfers

Here's what you should know about riding the TTC during #COVID19: https://t.co/bTDm8bbf8d

But despite these actions, photos and videos of dangerously crowded vehicles continue to circulate on social media.

One Toronto resident, for example, posted a video from the inside of a TTC bus Wednesday afternoon, and the footage shows a vehicle packed with people without any physical distancing at all.

Last week, the TTC announced it would be laying off about 1,200 employees to cut costs amid an 85 per cent drop in ridership and a loss of $90 million in monthly revenue. But many have said the move will undoubtedly result in more crowding and more danger for the essential workers who have no choice but to use public transit.

"Make no mistake — layoffs mean reduced service and these cuts will have consequences for essential, low-income workers who depend on the TTC to get to work at hospitals, nursing homes, grocery stores and pharmacies," said President of the TTC workers' union Carlos Santos in a letter last week.

"Service cuts will lead to overcrowding, which increases risk for spreading the coronavirus to those who are most vulnerable in our city."

you think this will help by laying off TTC employees and reducing bus routes. SUPPORT AND GIVE THE TTC what they need. TTC OPERATORS DESERVES MORE!!! NO to LAY OFFS! WE STAND BY ATU 113 @cityoftoronto @JohnTory @JustinTrudeau @fordnation @TTCStuart @TTChelps https://t.co/nC4MSr2hip

The transit agency has acknowledged that several bus routes tend to be extremely busy during the morning rush hour, and they've asked passengers to avoid nine specific routes before 7:30 a.m if possible.

They also say they're monitoring a long list of routes that they've deemed problematic, and that extra buses have been redeployed on those select routes.

@TTChelps this was the second bus the first was even more crowded How can TTC justify layoffs pic.twitter.com/YY293TSiLa

"In order to reduce customer volume and allow for better physical distancing, we continue to monitor higher volume routes particularly in the busiest times of the morning and afternoons," the transit agency said in a statement about bus crowding.

"We encourage customers to delay any trips until after 8 a.m. whenever possible."

The TTC also says that 14 supervisors have been assigned to key positions to direct additional buses to where they are needed most.

And yet, the crowding persists.

by Mira Miller via blogTO
Posted by Arun Augustin at 10:25 AM