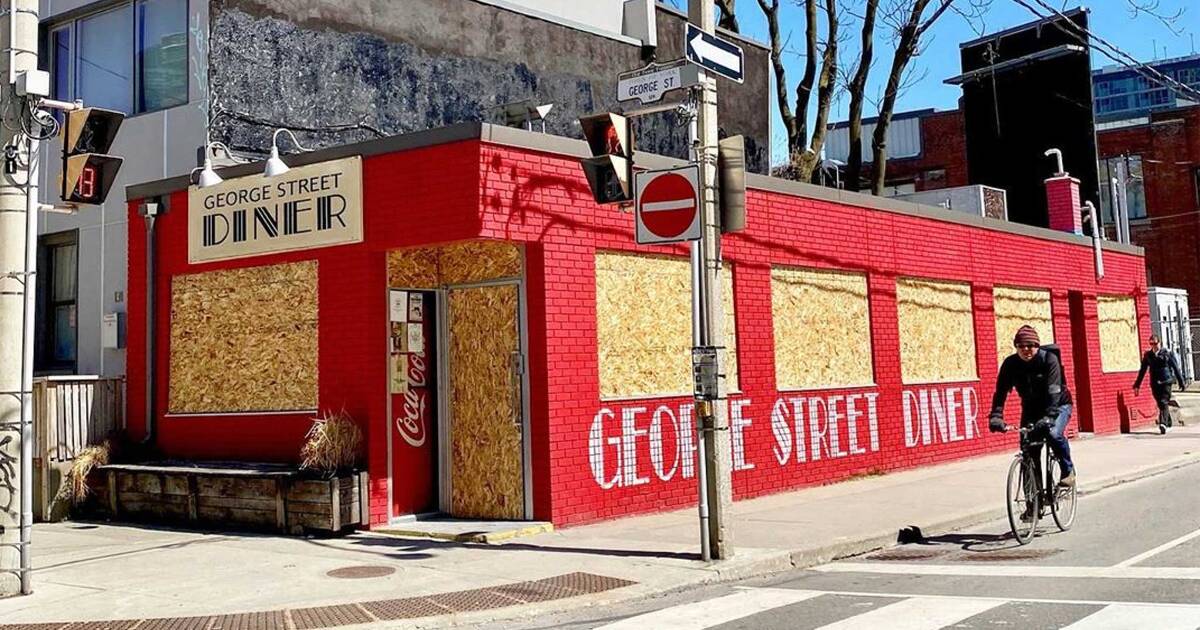 The St. Patrick’s Day decorations are still up inside the George Street Diner says owner Ash Farrelly. The popular diner was shut down on March 16 after the city asked restaurants to close their dining areas.

With a few exceptions, many of Toronto's classic old-school diners are not among the restaurants offering takeout and delivery services.

But while the windows are boarded up and the doors remain closed at the George Street Diner, they're still finding a creative way to make money during the pandemic.

The diner is know for their Irish soda bread so Farrelly decided to sell the bread mix and is delivering it personally, contact-free, to people’s homes throughout the city.

The decision to sell the bread mix was simple: “Soda bread is so easy to make,” Farrelly suggests. “And all the customers have loved it right over the years. I built my business on soda bread as I tell everybody. They come in for it with their breakfast or lunch.”

Farrelly deliberately chose to avoid the takeout and delivery route that many restaurants are taking. “The delivery companies charge so much money that restaurants make nothing unless people are going to pick it [the food] up,” she said.

“We knew that things were kind of going to go into a place where this could be a long, long time,” Farrelly adds. “And [the soda bread was] the only thing we could do to keep everybody safe.”

Farrelly is also working toward getting the mix onto grocery store shelves, but this hasn’t been without its hurdles.

“We make sandwiches in the restaurant and serve people coffee,” Farrelly says. “We know nothing about marketing the product. We're just three women who are trying to figure it out.” Because of the bread mix sales, Farrelly was able to hire back two staff members.

Keeping George Street Diner alive is Farrelly’s main goal. “I need to keep this restaurant alive, basically,” she says. “That's what it is.”

Before the pandemic, The Lakeview Restaurant was open 24/7. “We've been doing that for 11 years and the only time we ever close is for film shoots,” owner Fadi Hakim says.

Currently, however, The Lakeview is closed and is not offering a takeout or delivery. Instead, Hakim is taking the opportunity to perform minor renovations on the property.

“What we've kind of been doing is taking the time to actually get a lot of that stuff done, which is a big deal for us,” he says. “Not to mention, it's a big menu, so it [takeout and delivery] is kind of a difficult thing to start up.”

A consequence of the lockdown was that it had Hakim and his team thinking about the future of restaurant dining. “The way that the booths are situated kind of works in our favour because people are separated,” Hakim says.

“So then we had the idea to add glass partitions in between each of the booths. So that's something that we're going to do.”

“We're working with a glass guy to install all of those for when we reopen,” Hakim says. In other words, The Lakeview has been taking the time to make renovations that will be conducive to social distancing when the city opens back up.

“People are going to appreciate separation within a restaurant,” he added. “It's going to be really strange for bistros to cram people in,” he predicts.

The safeguards The Lakeview is putting in place are in anticipation of people who might be reticent to go out, but also people like The Lakeview’s regulars, who visit many times a month.

“Being safe is a big deal for us, not to mention we have a lot of kids that go through here,” he says. “We found it was important to think like that, and take this time off because we never get that time off to kind of put this stuff into play.”

But this isn’t all The Lakeview is doing while it’s closed. Over the years, film has been a big part of The Lakeview’s life. While the diner has been closed, Hakim has been allowing some filmmakers to shoot inside.

“We've had three movies that were shot here while this happened,” he reveals. This inspired the new initiative that The Lakeview has taken on.

“Until we're told that we're going to be able to open, we're going to take one amateur filmmaker on every Friday,” he says. This initiative will begin May 1. The filmmaker will be given 10 hours at a time at The Lakeview.

“They have to obviously [be] only four people because five people aren't allowed together,” Hakim says. “We will have a steward from here to guide them and show them where everything is, et cetera, et cetera. Turn the lights on and turn the lights off, and then lock up after them.”

While The Lakeview keeps its doors closed to renovate and foster film, and while Farrelly delivers her Irish Soda Bread Mix throughout the city, there are some classic diners that remain open for business as usual, in a limited capacity.

The Skyline is offering items for pick-up, and Gingerman Restaurant is doing takeout and delivery through Uber Eats and SkipTheDishes.

An employee at Gingerman says the family-run restaurant is trying to make the best of the situation. “The way we look at it is something's better than nothing,” he says.

One customer is being allowed into the restaurant at a time to order, and staff are constantly keeping the space sanitized to protect customers and employees, he says.

Inside, staff and customers practice social distancing, he adds. But he has noticed that business is down compared to what it was pre-pandemic. “We're doing a fraction of what we usually do,” he says.

Farrelly is choosing to deliver her Irish Soda Bread Mix with her son in her van, rather than through an auxiliary delivery service, for a simple reason: “All I need to do is make the expenses,” she says, the expenses that will allow her to get back to her restaurant after the pandemic.

And Farrelly is confident that she will be able to go back to George Street Diner. “My life would be miserable if I didn't have this little tiny thousand square foot diner that I created from basically a rundown corner 13 years ago,” she says.

by Alisha Mughal via blogTO
Posted by Arun Augustin at 7:46 AM