A guide to Nuit Blanche 2018 in Toronto 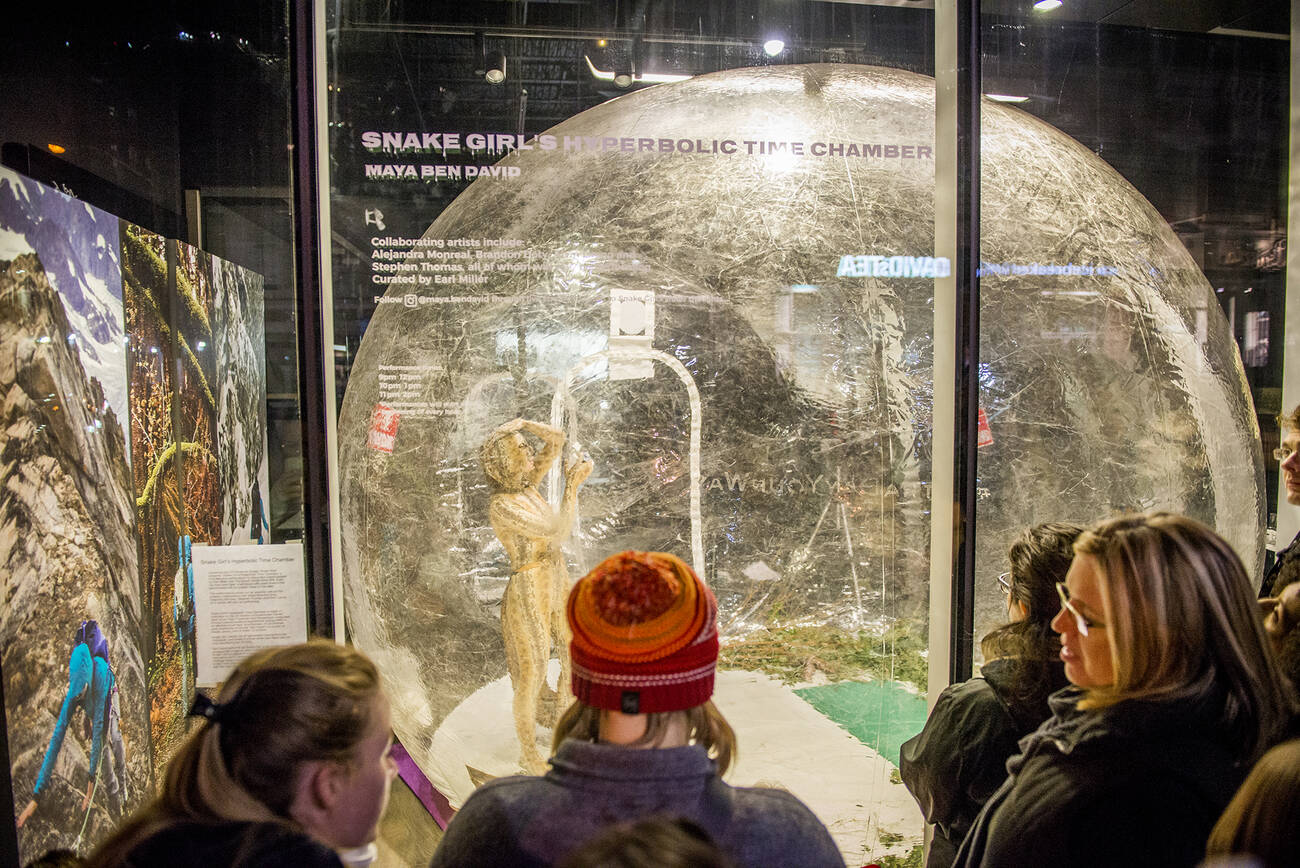 Nuit Blanche 2018 is back in Toronto for another round of art beneath the stars, this time with strong undertones of evolution and progress with this year's theme, 'You Are Here'.

This edition of Nuit Blanche marks a special one: for the first year ever, the arts festival will span into Scarborough—the furthest east the annual all-night affair has ever gone—with tons of must-see installations and creative programming in the Scarborough Civic Centre.

Anyone planning on staying out late into the night should dress for some nippy weather. It's going to be mostly clear once evening hits with a forecast of 11C, and temperatures are expected to drop to a crisp low of 8C overnight—typical weather for a Nuit Blanche weekend.

Some artists and builders will be out tinkering away at their installations during the day, but this wondrous evening of arts exploration doesn't technically start until 6:58 p.m. tonight (Sept. 29).

Once the clock strikes, it's off to check out more than 75 projects (it's physically impossible to see them all) scattered around the city from over 300 local, national, and international artists.

The busiest time is usually around 11 p.m. when lines really start to fill up. It starts to die down a bit around 2 a.m., with most big displays puttering out around 4:30 a.m., when the sensible crowds have already scattered.

If you're trying to avoid lines, however, sometime after 3 a.m. might be the best time to go: drunken festival-goers should be passed out in their beds by then, and the witching hours leading up to 7 a.m.—when the festival officially ends—might offer some quiet magic for the dedicated to check out some art.

The bulk of installations are in and around Queen Street between Yonge and University Ave, where you'll find the biggest crowds, but there's also things to see on Sterling Road (where the newly-opened MOCA is), in Yorkville, at the Aga Kahn, Ontario Science Centre, and in Scarborough.

From the all-night program of talks in Scarborough helmed by Toronto legend Director X to the the dancers in the Eaton Centre's sky bridge, this edition of Nuit Blanche definitely has it's fair share of must-see attractions.

Nuit Blanche is also a good opportunity to check out the many cool arts institutions around the city if you've never had a chance to visit before, like Artscape Youngplace, the Bata Shoe Museum, The ROM, and 401 Richmond.

If you have no idea where to begin your journey, head to one of three event centres closest to you to grab a map or get some info from a volunteer and start from there. Otherwise just follow the hoards of people.

What to eat and drink

Aside from the usual food trucks around the main festival areas, food options include everything from the International Dumpling Festival exhibit, which will be slinging out worldwide variations of dumplings all night (or until they run out), late night dim sum, and pizza.

See our list of bars open until 4 a.m. here

Due to the immense number of human bodies cramming up into specific areas in the city, y0u can expect travelling around Toronto will be a little different than usual.

For the first year ever, the festival will be doing partial road closures this weekend to ensure pedestrian safety as they wander around.

Closures of Borough Drive in Scarborough and Queen and Bay Streets downtown will last until Sunday morning, so while it may be great for walkers, drivers may have to manoeuvre a little more carefully. They can, however, park at any of the TTC Commuter Parking Lots for free.

To avoid all the fuss you can always just take the TTC, where Day Passes bought for today will be valid until tomorrow at 7 a.m— perfect to take advantage of the all-night service on Lines 1 and 2.

Same goes for the stations between Kennedy and McCowan stations on Line 3, where entry is free starting at 7 p.m. if you enter through Kennedy, Lawrence East, Ellesemere, Midland, Scarborough Centre or McCowan stations.

On top of that, there'll be free shuttle services running every half hour between major sites like the ROM, the Aga Khan Museum, Ontario Centre, and Lawrence East Station from 7 p.m. to 3 a.m. Anytime after that, the shuttle comes every hour until 7 a.m.

Before heading out, make sure you download the event map on your phone to keep track of all the different installations near you.

Nuit Blanche is a huge photo opp, so why not tag your photos on Instagram for a chance to win prizes? The contest starts when Nuit Blanche does at 6:58 p.m. on Saturday September 29 and the deadline to submit is the end of day September 30.

All you have to do is tag your best shots with the #blogTOnbTO hashtag. Not on Instagram? You can also e-mail the photos to us at photochallenge [at] blogto [dotcom].

We'll then narrow the entries to ten finalists and put the winners to a vote from October 1 to October 7 after which the winners will be announced.

Prizes for the top three photos include:

by Tanya Mok via blogTO
Posted by Arun Augustin at 9:00 AM