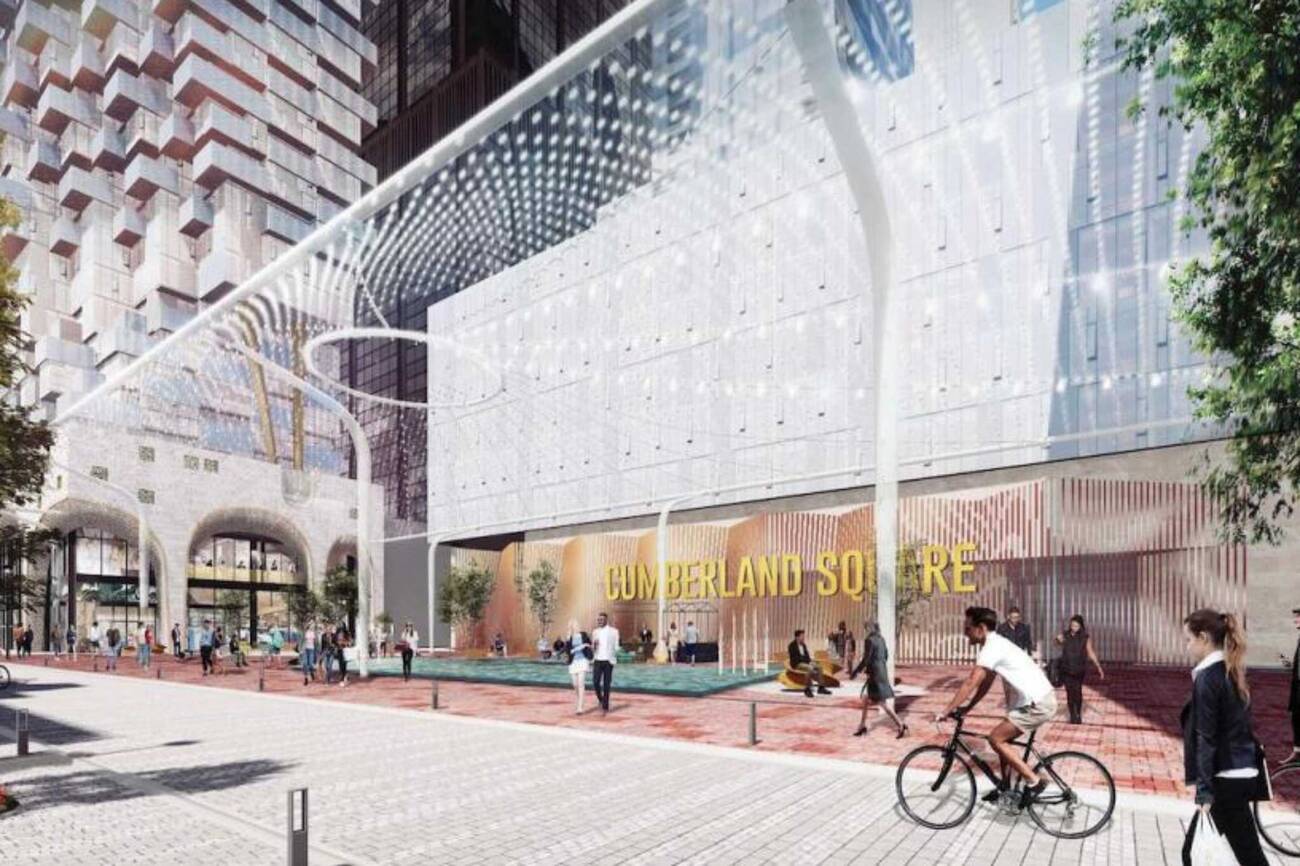 After multiple botched plans to develop the northwest corner of Bloor and Yonge, a new rezoning application has been submitted for the project known as Cumberland Square.

It's been 15 years since plans were first submitted to redevelop the L-shaped site which sits at the northwest corner of Bloor and Yonge, and runs along the south side of Cumberland to Bay Street. 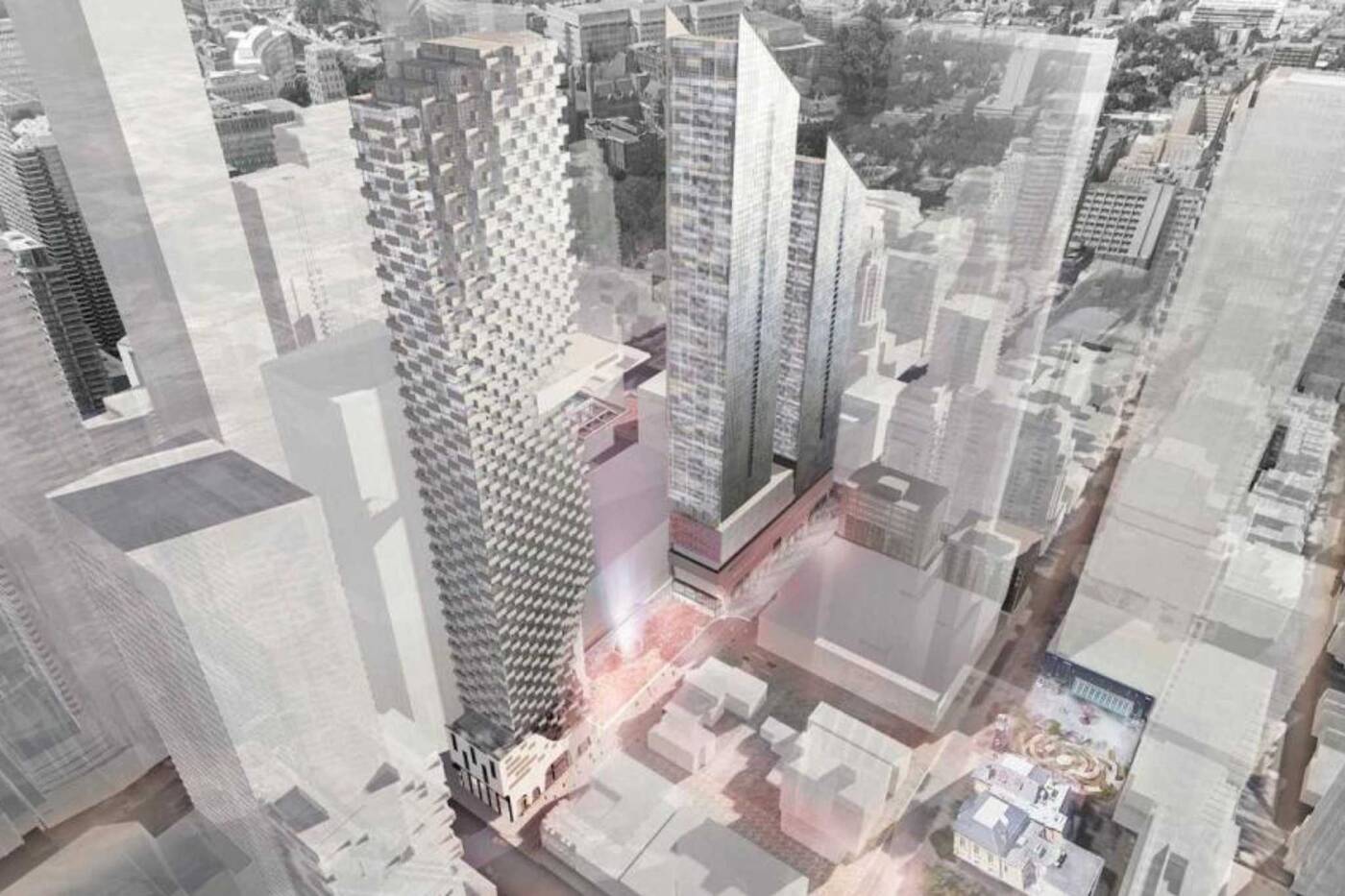 KingSett Capital has sumitted a rezoning application for the Cumberland Terrace site. Photo by UrbanToronto via Giannone Petricone Associates.

This newest proposal from KingSett Capital, made through a limited partnership via Bloor CT Acquisition LP and designed by Giannone Petricone Associates, suggests adding three towers—at 50, 66, and 69 storeys—and a public square.

The revitalization of the site, which has flip-flopped under different designers between adding one tower, then two, hopes to revitalize the site of the aging three-level Cumberland Terrace by adding a 50- and 66-storey building west of the square, and a 69-storey tower to the east.

Past plans have included a failed consolidation of different properties in the Yorkville area, like Cumberland Square, 2 Bloor, the Holt Renfrew Centre, and 33 Yorkville to better co-ordinate future developments.

There was even an international design competition held jointly by KingSett and Morguard to see how to best redevelop the Yonge and Bloor block spanning from Bloor to just north of Cumberland, but that, too, went nowhere.

KingSett, who acquired both Cumberland Terrace and the adjoining 34-storey tower at 2 Bloor St. West in 2015, will be keeping the latter pretty much the same structurally, but with improved retail space on the first three floors and connections to the future public square.

Their plans to take Cumberland Terrace—the old school Toronto shopping mall which was built in 1974 and today houses a number of empty storefronts and a sad little food court—and turn it into Cumberland Square will take up about 31 per cent of the site. 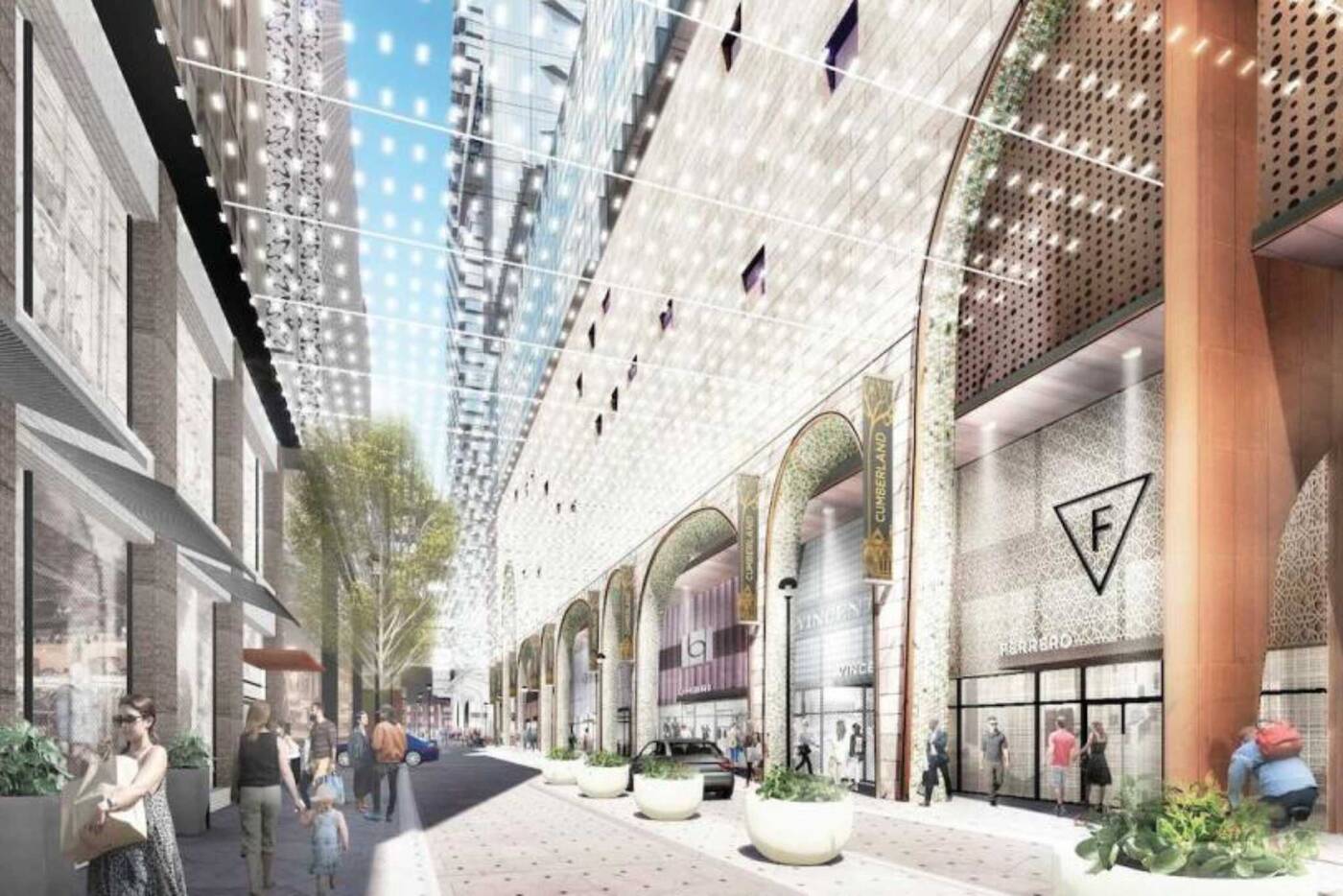 Cumberland Square is a plaza being proposed to replace Cumberland Terrance. Photo by UrbanToronto via Giannone Petricone Associates.

Designed by Janet Rosenberg + Studio, the property may eventually e transformed into a plaza and gathering space equipped with a reflecting pool, something called a 'ghost house,' and a transparent canopy decked out with lights running between the east and west towers.

Underground, the revitalized plaza will feature connections via the PATH to the Bay subway station and surrounding buildings like the Holt Renfrew Centre.

As for the buildings, both condos to the west of Cumberland Square will include car elevators, bike storage, and office spaces from the sixth floor to the eighth.

The ninth floor will act as the main 'sky lobby,' while one floor above, the indoor amenities will face a rooftop terrace that links both western towers together.

To the east, on the other side of the plaza, the tallest building will feature retail space on its bottom two floors. The second floor will also have a large outdoor patio area, with condo suites starting on the fifth floor, and on the 45th floor, an outdoor pool.

Cumberland Square could be a welcome addition to the hodge-podge of the many—some unwelcome—construction projects in and around the Yorkville area, but whether or not residents really end up getting a public space with their condos has yet to be seen.

by Tanya Mok via blogTO
Posted by Arun Augustin at 2:09 PM