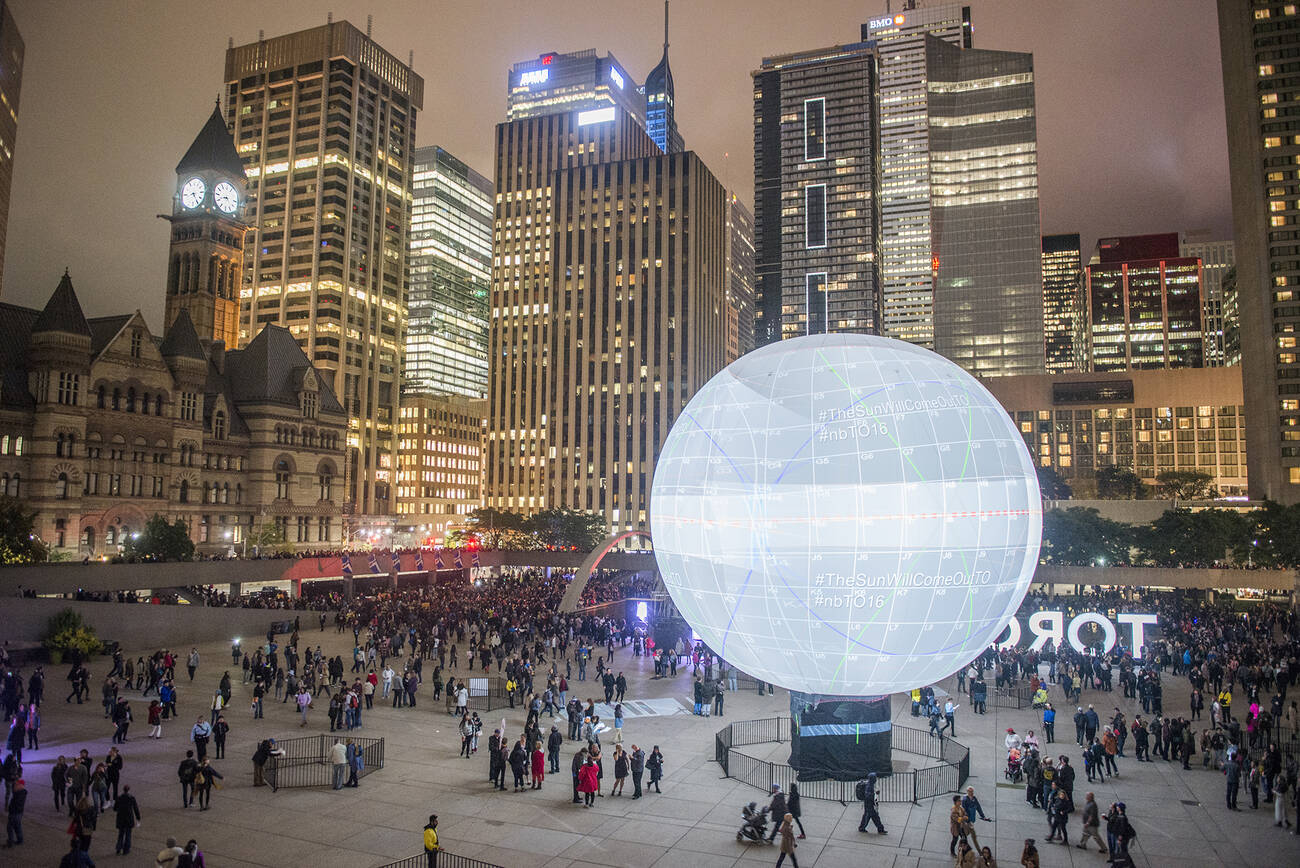 Weekend events in Toronto mean you better plan your coffee route now because Nuit Blanche is set to turn the entire city into one big art piece. If you're not sure where to start, here's a handy guide. Elsewhere, there's a party at the ROM and the last PS Kensington of the year.

ROM Friday Night Live (September 28 - November 23 @ Royal Ontario Museum)
Another season of #FNL returns for a big party inside the museum. Food, music, dancing and exhibits are all part of the fun.
Nuit Blanche (September 29-30 @ Multiple Venues)
Soak up the arts and culture of the city during this all-night art festival happening all over, inside and outside, with local and international artists.
Wu-Tang Clan (September 30 @ Rebel)
One of the most legendary rap groups brings the pain to Toronto as part of the Never Jaded arts series and a totally free concert.
Pedestrian Sundays (September 30 @ Kensington Market)
With the weather getting cooler, PS has just two dates left in the fall for you to get your fill of food, music, performances and games in the street.
Fall Home Show (September 28-30 @ Enercare Centre)
The latest in all things home is on this weekend with exhibits showing off the newest trends in structure, style and organization of any space.
Legends of Horror (September 28 - October 31 @ Casa Loma)
Halloween comes early to Casa Loma as Legends of Horror returns to transform the old mansion into a regular scare-a-thon.
Nitro Circus (September 30 @ Scotiabank Arena)
High-flying motorcycles take over the Scotiabank Arena to soar over giant dunes during this FMX, BMX, scooter and inline extravaganza.
Toronto Oktoberfest (September 27-29 @ Ontario Place East Parking Lot)
The sights and sounds of Deutschland continues today during this huge celebration with all the lederhosen, bratwurst and steins you can imagine.
Bevy 0040 (September 28 @ Brunswick Bierworks)
The Society of Beer Drinking Ladies is throwing a big patio party with local, national and international brewers, food and an all-women makers' market.
Taste of Jane and Finch (September 29 @ Greenwin Inc.)
New this year is a big street festival at Jane and Finch featuring a day of food trucks, offering treats from all over the world, performance and activities.
Witchstock (September 29 @ Bellwoods Brewery)
Bellwoods Brewery welcomes brewers from as far away as Belgium to this beer festival featuring food, merch and unlimited tasting samples.
Cauldron Ice Cream Grand Opening (September 30 @ Cauldron Ice Cream)
Flowered ice cream is in season and Cauldron has the Insta-worthy beauties ready when they celebrate their arrival in Toronto this weekend, plus a free ice cream give-away.
Night Owl Festival (September 27-30 @ Multiple Venues)
Get your fix of psych rock at this festival happening all over the city with performances by Mien, Teke Teke, Luna Li and many more.
Dwayne 2000 (September 28-29 @ The Danforth Music Hall)
Live renditions of all the best Y2K hits are on during this big, two-night party with Dwayne 2000, a music collective covering all the best tunes.
The Weather Station (September 29 @ Mod Club Theatre)
Tamara Lindeman's powerful voice is here to rouse the spirit as Toronto's own indie folk band hits the stage for the night.
88rising (September 30 @ RBC Echo Beach)
A showcase of Kpop talent arrives with some of 88rising's artist collective performing, including Rich Brian, Keith Ape, Joji, HigherBrothers and more.
Neck Deep (September 30 @ The Danforth Music Hall)
Pop punk is a mood this weekend with Neck Deep who wear their heart on their sleeve when singing about the all the usual angsty goodness.
Minding the Gap (September 28 - October 1 @ Hot Docs Ted Rogers Cinema)
Exploring the lives of three young men coming of age, Bing Liu's film moves through the stages of life and the challenges that come with it.
Matilda (September 29 @ Revue Cinema)
Take a trip down nostalgia lane with the 1997 classic film Matilda about a girl with special powers and co-starring an unchanged Danny Devito.
The Barn and Stables Reunion (September 29 @ Club 120)
One of the Village's biggest institution is coming back for one night only with a night of dancing, entertainment, memories and good times.
The Pancakes and Booze Art Show (September 28 @ The Opera House)
Art, body painting, music, booze and a whole ton of pancakes are on at this big party featuring signature cocktails and unlimited fluff cakes.
Y2K (September 29 @ The Baby G)
Back again is this huge party all about the turn of the century with guilty pleasures, one hit wonders and all the best chart toppers.
Worst Behavior (September 29 - October 28 @ Clinton's Tavern)
I love it! Get your fill of all the best hip-hop, rap, R&B and a ton of the 6ix God himself at this weekly dance party.
Etsy Fall Market (September 29 @ MaRS Discovery District)
Gifts, jewellery, clothing, flare, household goods, lifestyle and beauty products can all be found at this big market by local Etsy makers.
Nerd Market (September 29 @ OISE)
The Nerd Market is back with all kinds of used geeky-goods. Browse all kinds of anime, comics, tabletop and video games, manga and more.
Art Metropole Moving Sale (September 29 @ Art Metropole)
Books, posters, supplies and more will be slashed up to 60 per cent off while the artist-run Art Metropole makes its move to the MOCA.
Autumn Makers' Market (September 29 @ Withrow Park)
Local makers will be on-hand to sell their handmade, sustainable and eco-friendly wares at the autumn edition of this market.
Vintage Clothing Show (September 29-30 @ Queen Elizabeth Building, Exhibition Place)
Handpicked vintage clothes hit the racks from all over the country during this huge clothing show, including rare, designer and unique finds.
Antique and Vintage Market (September 29-30 @ Queen Elizabeth Building at Exhibition Place)
All vintage everything from designer clothing, gadgets, furniture, housewares, art, vinyl and books can be found at this big, two-day market.

by Lisa Power via blogTO
Posted by Arun Augustin at 9:59 AM