35 bars to watch the NBA Finals in Toronto by neighbourhood 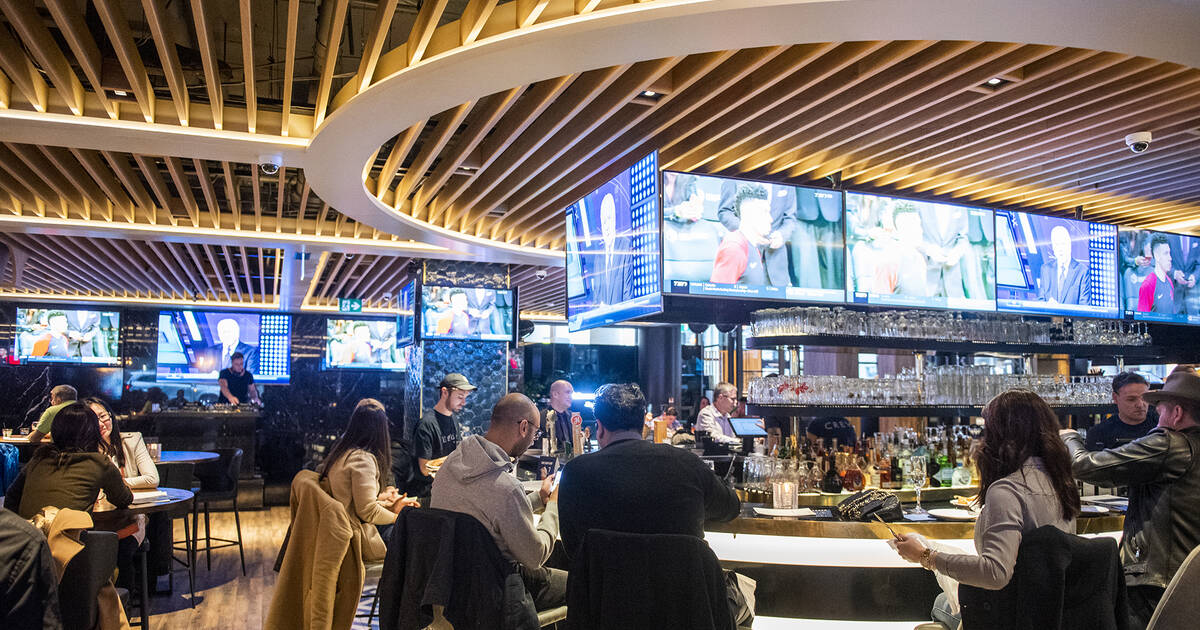 When it comes to the Raptors playing the NBA Finals, pretty much everyone is going to be glued to the TV, but there are some especially good vantage points from which you’re going to want to take it all in. Every neighbourhood has their local sports bar, but these are the ones to head to for those crucial games.

Here are some of your best bets to watch the Raptors vs. The Warriors in the NBA Finals in Toronto .

Wings even hotter than the plays provide the perfect gametime snack at Drums N Flats.

Multiple huge screens at McSorley's will be screening the finals, so get there early for the game because it gets absolutely packed.

Known for their bar food and back patio, get to Hurricanes early to secure a stool.

Four TVs at The Jim will all being playing the Raptors with the sound on, and there’s craft beer on tap for commercial breaks.

Though Shakey’s is named for an original owner who played for the Leafs, this is where to go in this area any game day.

Fuel your night with Longslice beer and smash burgers at The Aviary in an up-and-coming neighbourhood. 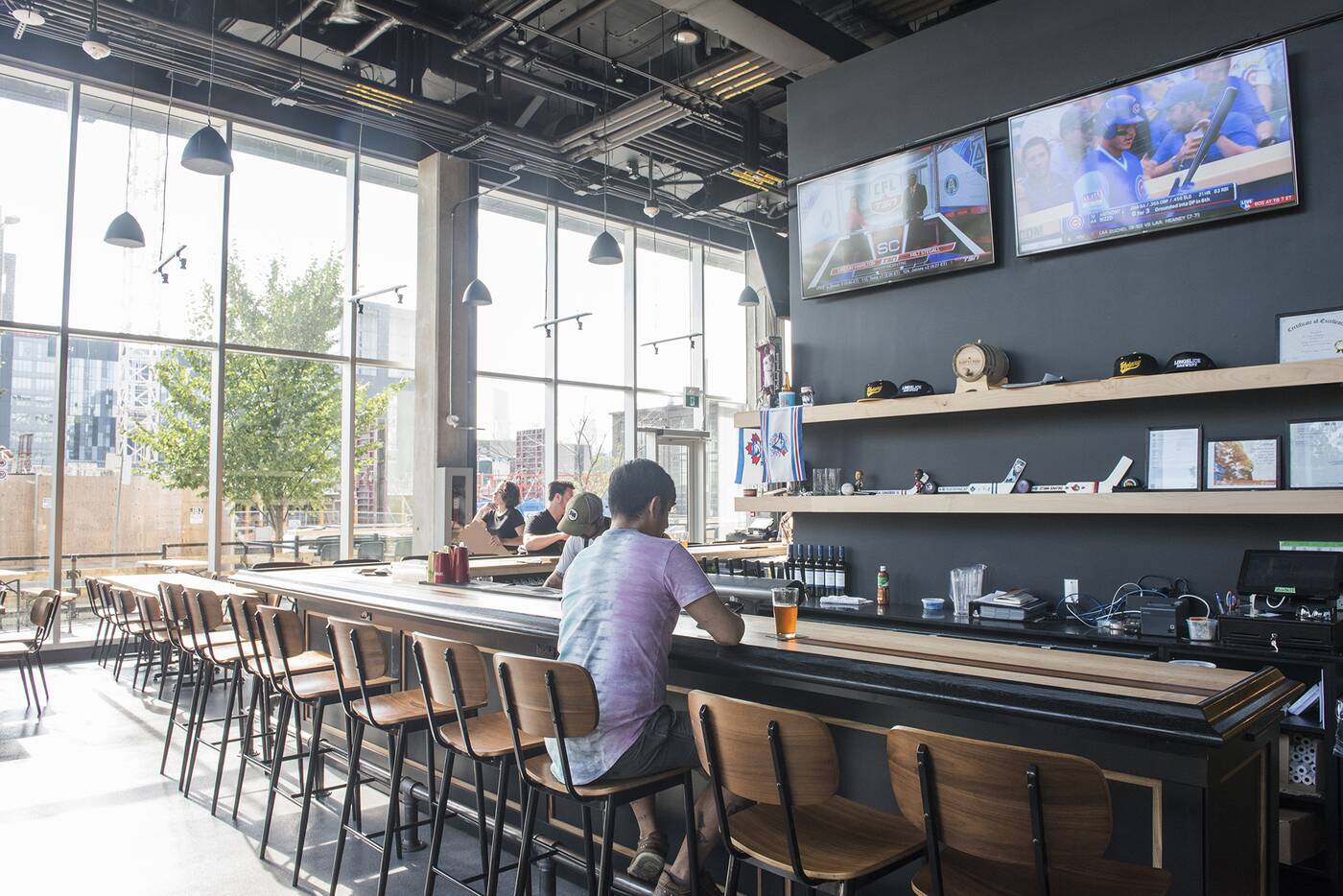 The Aviary in the Canary District has plenty of seats around the bar to catch the game. Photo by Hector Vasquez.

Pssst...every single game will be streaming in HD on an 88” screen at Big Trouble, a bar hidden above a restaurant.

This neighbourhood has its own location of Banknote, with all the typical draft beer and pub grub fans of the bar have come to expect.

All sports fans are welcome at Striker, where if you’re lucky, Drag Race and the finals might just be playing on different levels on the same night.

Hunters Landing provides a slick environment for taking in the game if you’re more into brisket mac n’ cheese than hot wings.

The Dylan makes for a cozy and casual place to take in the game with a craft tallboy in hand.

Though named for a baseball player, The Dock Ellis is the ultimate place in this area to take in the basketball finals while chowing down on a fried chicken sandwich or burger.

The Ballroom is doing multiple specials during game time and boasts 23,500 square feet to hold 900 basketball fans, so make sure you’re one of them.

A rooftop patio and lots of space at Crooked Cue mean there’s room for the whole group to watch the game. 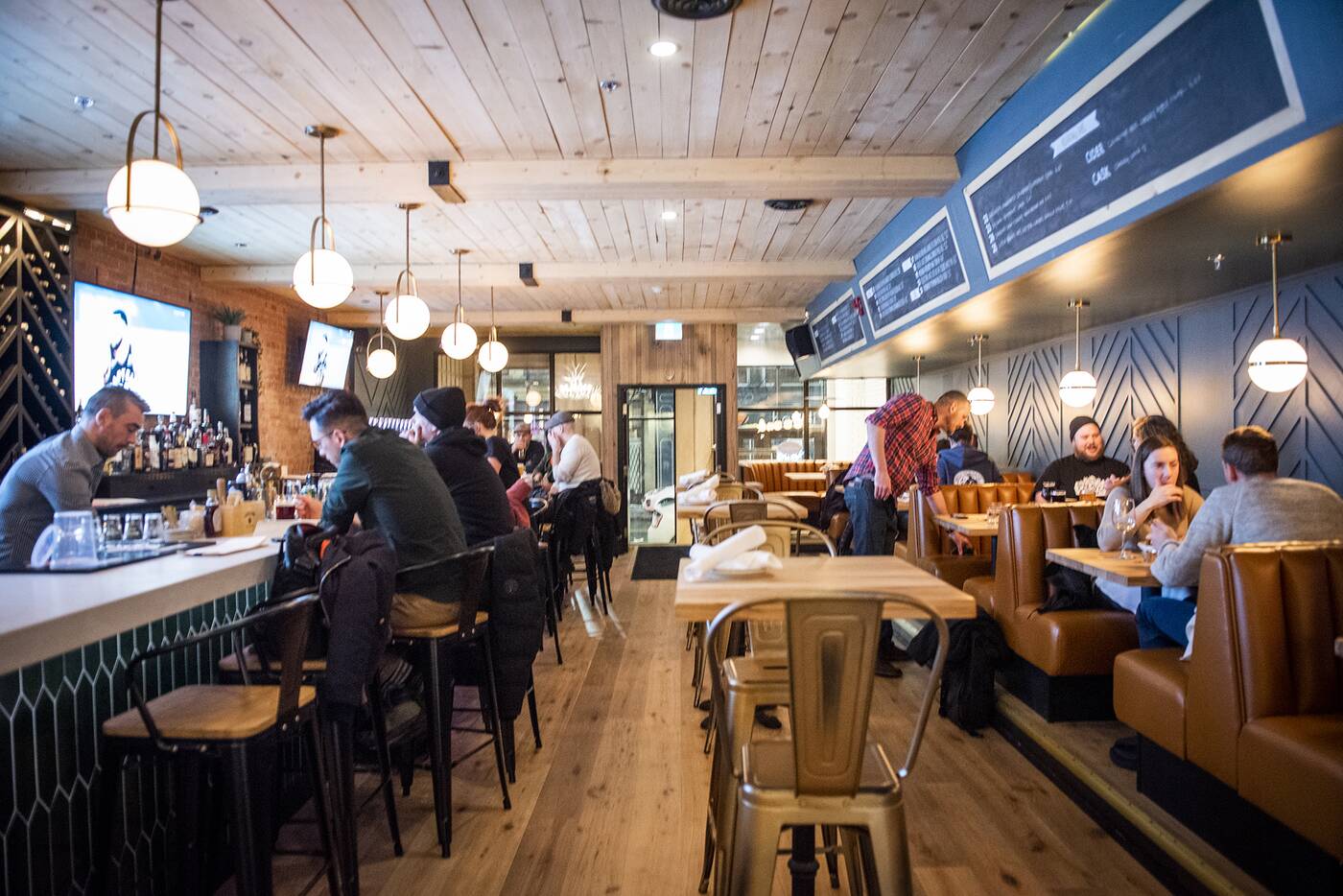 Chow down on giant pretzels while you catch the NBA Finals at The Alpine in the Junction. Photo by Hector Vasquez.

Pick 6ix Sports is one of the glitziest and most TV-filled spots to take in all the games—there are even TVs on the patio.

A huge screen at Rec Room will be playing the Raptors, and during breaks you can test out your own free throw skills in the arcade area.

The Alpine will be playing the finals with sound on in both their upper and lower bars.

Nothing goes better with a history-making finals series than an outrageous Caesar, so grab one at Score on King and take it all in.

Wheat Sheaf is one of this neighbourhood’s oldest bars; where better to watch a new legacy being created?

Local Public Eatery has buckets of beer to down during games, one of the more polished and larger destinations in the city for watching the finals.

Queen’s Head Pub has a decent atmosphere for enjoying the game, lots of draft beer and TVs mounted overhead for unobstructed viewing. 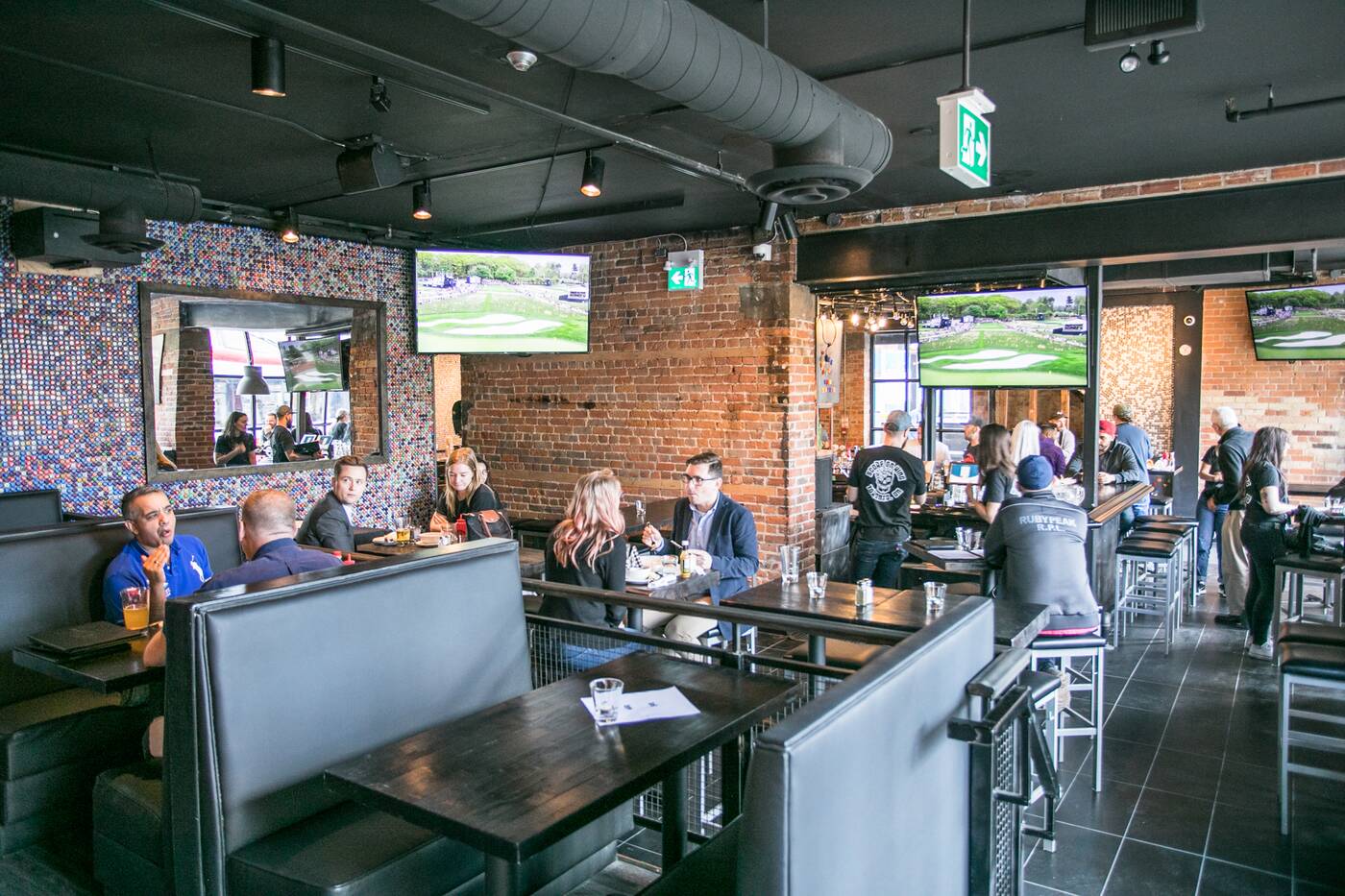 Score on King will serve you epic Caesars as you cheer on the Raptors. Photo by Hector Vasquez.

Nightowl is taking reservations for games shown on the big screen as well as their usual events still happening concurrently, like bingo.

Rally has all the space needed for the entire local fan base, as well as the drinks and smokehouse-inspired snacks to keep them pumped.

The Mezz is this neighbourhood’s haunt for game watching, beers, and bar faves like burgers.

Hot wings and bottles of beer are the perfect accompaniment to the big game at Jasper Dandy, where they’ve opened up their back space to become a standing room only “tailgate room.”

Though baseball is typically the name of the game at Round the Horn, they’re still a reliable spot to watch the basketball finals. 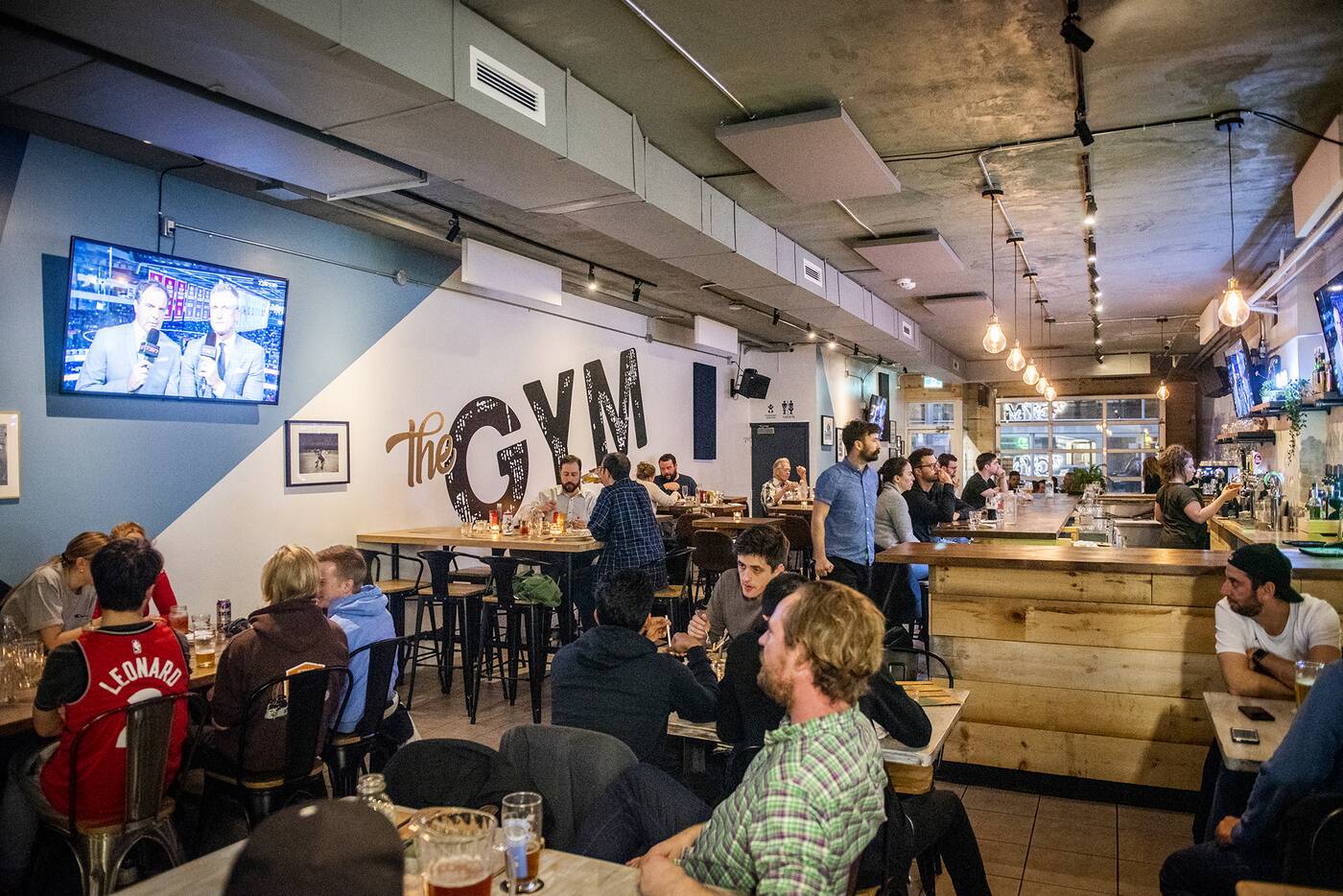 The Gym will be a bustling place on St. Clair West to catch the games. Photo by Hector Vasquez.

Black Dog Pub has a 72-inch screen on their patio, so get there early if you want choice seats.

Hitting up Real Sports Bar is the closest thing to actually being there, literally, seeing as this bar with towering TV screens is situated right next to the arena. Walk-in space is available, but it’s on a first-come, first-serve basis.

Watch the game with sound on well-positioned, huge TVs at casual neighbourhood pub The Gym.

It’s always a party at chill bar Councillor, but multiple TVs playing the Raptors in the finals take it to the next level.

Shark Club has 57 HDTVs so you’re pretty much guaranteed a good view of the NBA finals. 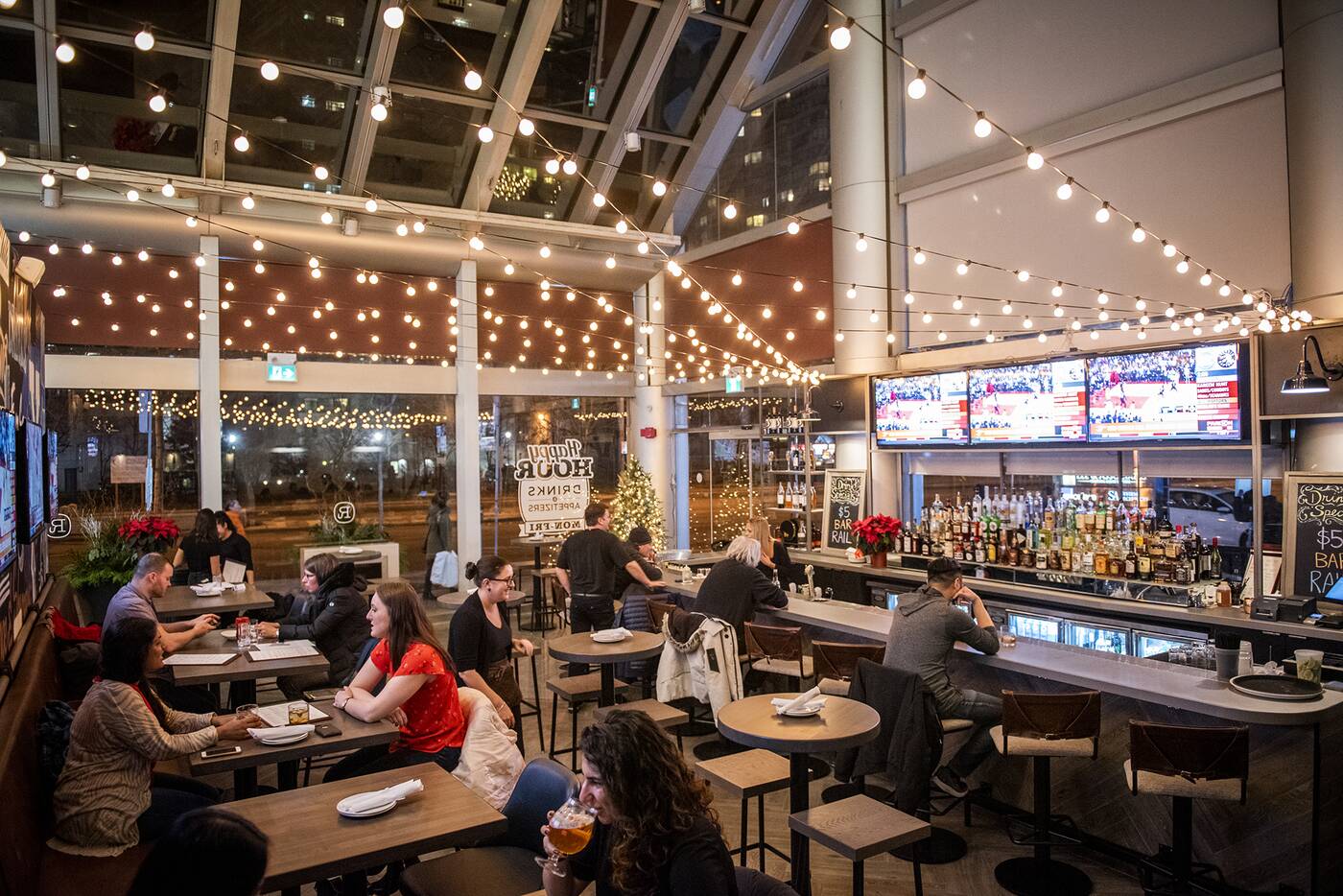 There's lots of space and plenty of TVs to catch the game at Rally. Photo by Hector Vasquez.

Fran’s Upper Deck has a good amount of space, plus diner-style bites (not mention a great view, if you can pull yourself away from the screen).

Right Wing may be named for a hockey position, but that doesn’t make watching the Raptors crush it at this tavern any less sweet.

Scallywags is this neighbourhood’s multi-level bar where, if you can’t find a spot, you can always try the next floor up.

Hemingway’s will be doing drink specials during games, and also runs a contest where your tab is on them if you can guess the exact correct final score.

by Amy Carlberg via blogTO
Posted by Arun Augustin at 4:20 PM